A dirt bike is built very differently than its street counterpart. The engine is mated with shorter gears, and the techniques involved in dirt biking push it to its limits. Therefore, it is essential to take proper care and maintain your dirt bike’s engine for optimum performance. Apart from lubricating and reducing friction on the moving parts, motor oil also cleans the engine of sludge. Different engines use different oil, and with a plethora of options available on the market, it may seem daunting to choose the right one. Here is our list of the best engine oils for your dirt bike.

This fully synthetic oil is stable enough to withstand extreme road conditions without losing its viscosity and performance capabilities.

Highly-refined castor oil blended with a specially prepared synthetic and an additive system to provide a wide range of features. It’s made for two-stroke vehicles. 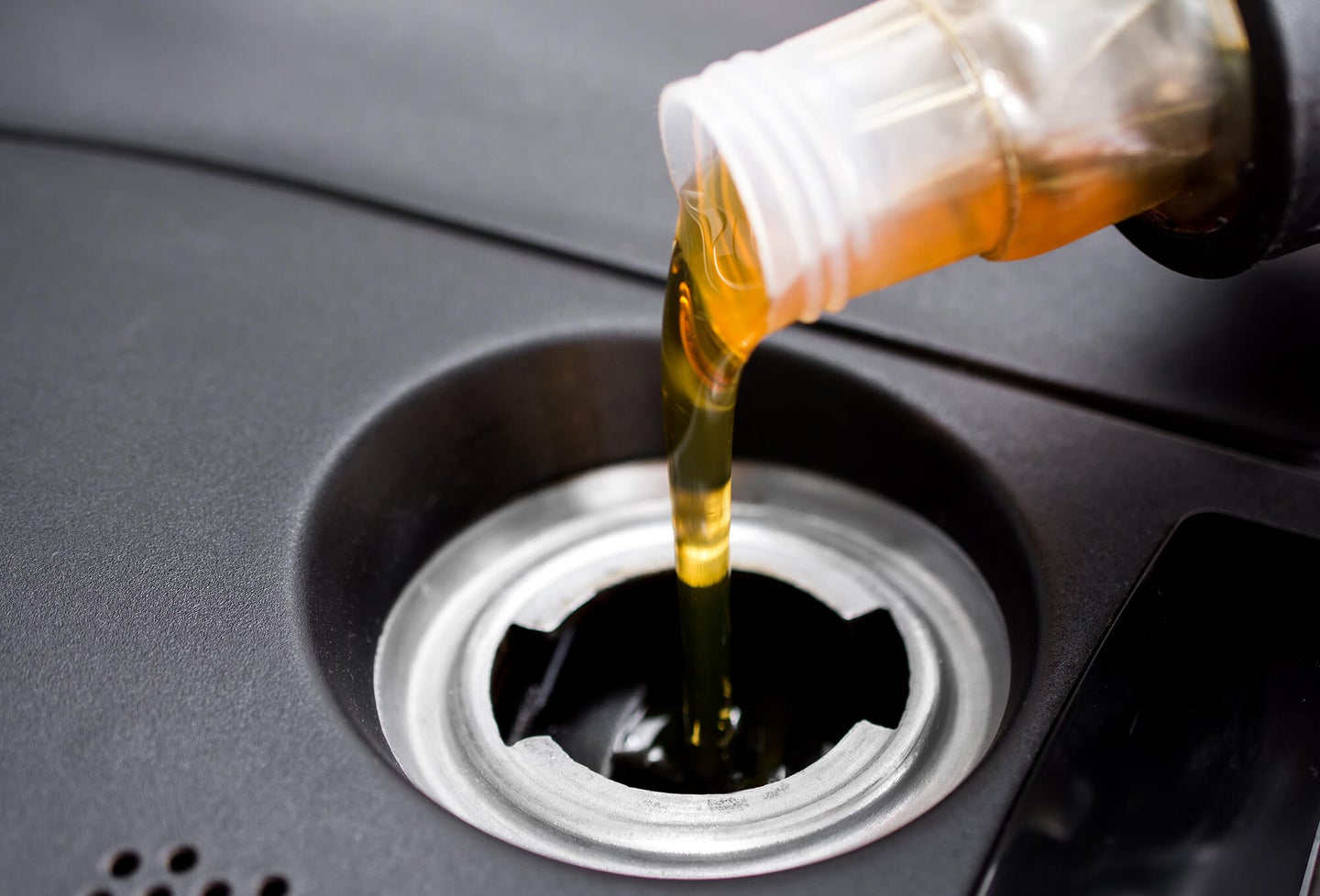 Two-stroke oil burns with the fuel and is more refined than four-stroke oil. It also features several additives. For example, the oil has detergents that clean varnishes and carbon deposits. It also includes anti-wear agents that safeguard the engine's moving parts. The best two-stroke oil for dirt bikes also has antioxidants.

Four-stroke oil is more similar to oil used in cars and has the same goal: lubricate the engine. Unlike two-stroke oil, you do not mix it with gas. The best four-stroke dirt bike engine oil also has additives, but the oil isn't formulated to burn. As a result, the additives are slightly different. Never mix four-cycle oil with gas in a two-cycle engine or use two-cycle oil in a four-cycle engine, because you can irreparably damage the engine.

Most modern motorcycles use synthetic oil. It’s more tolerant when it comes to high-performance and high-revving engines, particularly in hotter climates. This type of oil lasts longer and doesn't usually create black sludge due to oxidation. Synthetic dirt bike oil has a lower viscosity, which reduces internal friction, provides more efficiency, and increases engine performance. The downside is that it's more expensive than mineral oil.

If you have an older motorcycle, mineral oil may be more effective because it's heavier, thicker, and less likely to leak. It's common for older motorcycles to leak more if they use synthetic oil. Also, older unmodified engines are typically not as highly stressed as newer engines, so they won't benefit as much from synthetic oil.

The French company Motul was founded in 1853. It manufacturers engine lubricants for motorcycles, cars, and other vehicles and pioneered the formulation of a 100-percent synthetic lubricant for car engines in 1971. It's involved in several racing competitions, including 24 Hours of Le Mans, World Superbike, and Supercross, among others. One top product is the Motul 800 2T 2-Stroke Premix Fully Synthetic Motor Oil.

Maxima was founded in 1979 and is headquartered in Southern California. The race-inspired company produces high-performance oils, lubricants, and related products. Its oils are used in more than 50 different countries. One of its popular products is the Maxima Castor 927 2-Stroke Premix Racing Oil.

The British company Castrol was founded in 1899. It produces industrial, automotive, and motorcycle lubricants, including oils and greases. London-based BP bought the company in 2000. One of its top oils is the Castrol POWER 1 4T 10W-40 Synthetic Motorcycle Oil.

Motorcycle oils have different additives than car oils. They're designed to prevent a wet clutch from slipping and to hold up under engine stress. The best two-stroke dirt bike oil and the best four-stroke dirt bike oil is formulated to maintain lubrication when you lean around corners or bounce around on rough terrain. Look for products with antifoam and surface-active additives.

Dirt bikes and other performance bikes require oil that has an ester, which is a synthetic additive. Esters are commonly used in racing oils. An ester controls heat through dissipation, which is essential when it comes to high-performance engines. An ester works by moving the heat to sections of the engine where it can cool down due to air or a cooling system.

Engines can get really dirty over time. The best oil for dirt bikes is designed to work in conjunction with the engine to keep it cleaner. Some brands have cleaning agents with the ability to suspend carbon particles. This prevents sludge from developing on internal parts in the engine.

This premium-quality, 100-percent synthetic engine oil from Motul is specially designed for two-stroke motorcycles with high-performance engines. It provides protection against deposits and prevents the piston rings and exhaust power valves from sticking. In addition to motocross bikes and jet skis, this oil works in lawn equipment, including trimmers and blowers.

The oil does its job well. It uses ESTER Core technology, which protects your bike’s engine, and it's great for hard riders and high-rev engines. Users report that the product promotes smoother shifting. The oil exceeds industry standard specifications, and it comes with a nice pour spout. Overall, the oil lubricates and burns very clean and works and mixes well with racing fuel.

Most bike oils have some caveats. But this premium product is so good that it has no drawbacks except for its price. It is a little more expensive compared to other brands.

Made for the aggressive off-road rider, the 10W-40 is a fully synthetic oil that uses the latest technology to improve the conditions of your engine. The oil remains stable under extreme temperature conditions and will continue to flow as usual. This means you won’t need any thickener to maintain its viscosity. It’s also not affected by intense mechanical stress.

The formulation protects your engine from oxidation, corrosion, and degradation. It, therefore, prolongs engine life. It also gives you an optimized wet clutch engagement, and will improve your acceleration and handling. On top of that, it lubricates the engine part and prevents overheating caused by friction. This will help to reduce engine noise while you blast across the road.

Unfortunately, as with most full synthetic oils, the 10W-40 is not compatible with lead and is, therefore, a poor option for older dirt bikes that need leaded gas. It has also been noted that the container tends to kink causing the contents to leak, especially in hot weather.

This is a highly refined castor oil designed for two-stroke vehicles. It keeps power valves cleaner and functioning properly and operates best as a premix for leaded and unleaded fuels.  The oil is blended with a specially prepared synthetic and additive system that generates a wide range of features.

This oil burns fairly clean and smells good without buildup at low speeds. Castor oil like this is great if you want to stop friction. It provides excellent rust and corrosion protection and reduces carbon and gum formation. The oil vaporizes at a much higher temperature compared to other lubricants and works for a long time. It is also biodegradable.

One problem with this oil is that it is not designed to work in oil injection systems. Also, it does not mix well with some fuels, like the 100LL AV and some racing fuels. The product is also a little expensive.

The YamaLube All Purpose 4 Four Stroke Oil 10W-40 is genuine, OEM Yamaha oil, so you know it's going to do the job properly. It's designed for use on four-stroke motorcycles, ATVs, side-by-side vehicles, and scooters. This oil minimizes engine wear and tear and provides reliable clutch action. It's formulated with mineral-base oil and ultra-clean additives that are designed to prevent friction.

Users really like this oil, which is versatile in its application and compatible with everything from Yamaha sport bikes to dirt bikes. It ensures proper wet clutch lubrication, so you can shift more smoothly. The container has a marker so you know how much is left when you're filling the oil reservoir, which is convenient. Overall, it's a good quality oil and one of the best options for a Yamaha dirt bike.

There are not many complaints about this product. It can be slightly harder to pour than the quart-sized option. It's also a little pricey compared to some other options. Still, it’s worth the extra investment for a quality, factory oil.

Honda started producing GN4 motorcycle oil more than 45 years ago, and its Honda GN4 10W-30 Motorcycle Oil is a great option for dirt bikes and ATVs. Honda keeps up with new engine technology by frequently testing and developing its products to meet certain standards. As a result, the GN4 oil has excellent shear resistance and viscosity stability.

Since Honda built the clutch and transmission on its bikes, it makes sense that it would develop a lubricant that provides optimal performance, like GN4. It's one of the best non-synthetic off-road engine oils you will find for the price. While it may be slightly more expensive than a non-Honda-branded option, you can feel confident that this oil will do what it's supposed to do.

However, you may not need to use all of the oil that's supplied in the 1-gallon container. Also, you can't use it with bikes that require synthetic oil.

Q: Can I use car engine oil for my four-stroke dirt bike?

A: A four-stroke motorcycle engine environment is much more severe than that of a car. Motorcycle engines break down oil much faster than cars because they run hotter and faster. Generally, motorcycle-specific oils have five times the protective additives than car oil. They also do not have friction modifiers, which can mess heavily with the clutch performance. Therefore, it is highly recommended to use oils designed specifically for motorcycles.

Q: How frequently should I change the oil on my bike?

A: There is no hard and fast rule when it comes to oil changes. However, the general consensus is that oil must be changed every five to 15 hours of riding or every six races. To get a more accurate idea, refer to your owner’s manual.

Q: How do I dispose of used dirt bike oil?

A: It is often illegal to dispose of used engine oil into sewers, garbage cans, down kitchen sinks and drains, or even to pour it on the ground. A single gallon of used oil contaminates one million gallons of freshwater. Your local refuse center or oil recycling facility may accept used oil from consumers. If you cannot locate one in your area, ask your local motor oil retailer about the places they recommend.

Get the old oil out without getting your pants dirty

Best Oil Filters to Keep Your Engine Clean and Healthy

Take a look inside and compare new vs. used spin-on oil filters.

Fixing an oil leak can be quick and easy thanks to oil stop-leak additives.

Yes. You really do need to change the filter, too.