Fire-Damaged 1983 Aston Martin Lagonda for Sale, If You Dare

Pretend you’re in a fixer-upper show and picture this returned to its former glory. 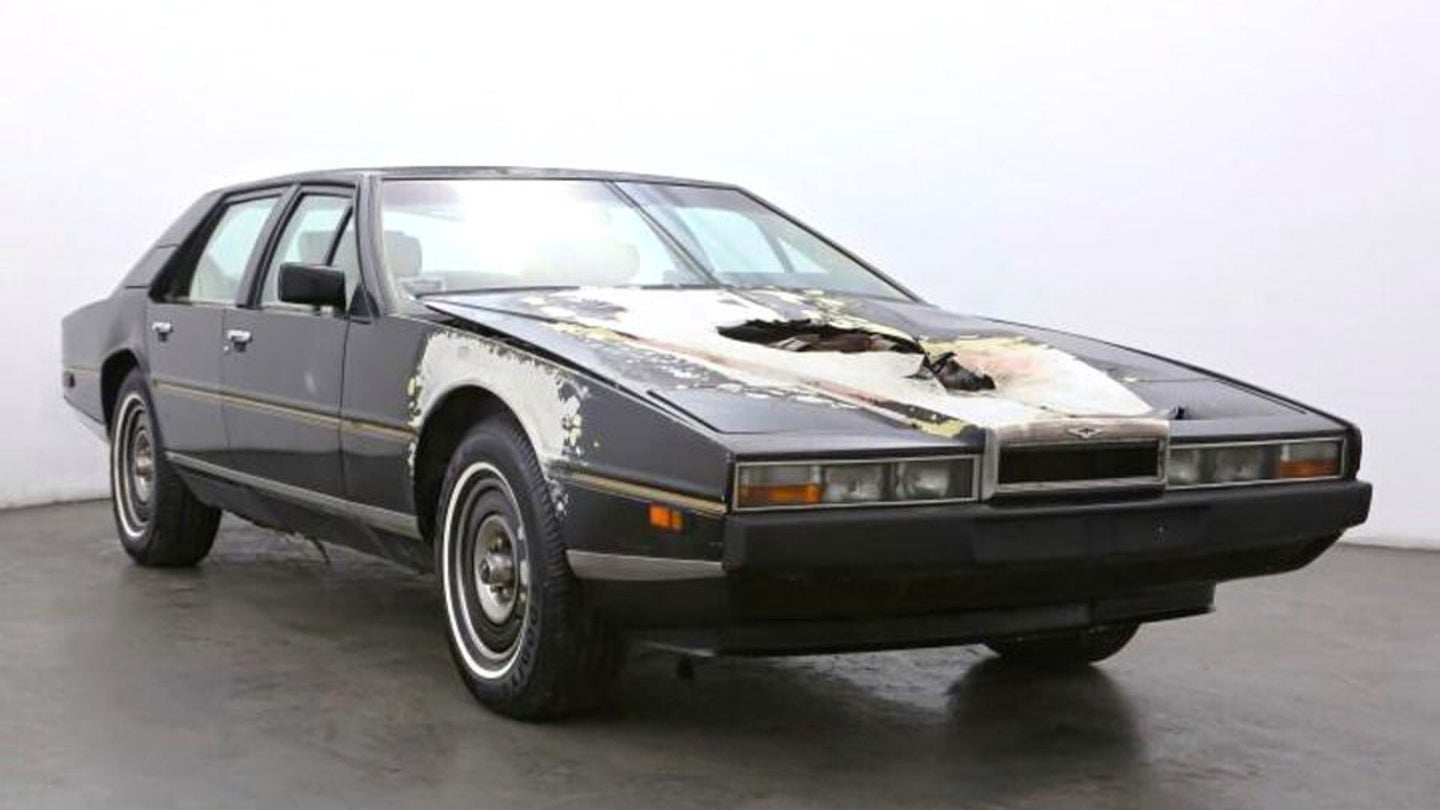 It’s almost too good to be true; a 1983 Aston Martin Lagonda is selling for less than $30,000. The legendary Lagonda listed with Hemmings in all of its wedge-shaped glory is a rare find. There’s just one teensy-weensy problem: it looks as though someone took a blowtorch to the top half and it sports a gaping hole in the hood.

On the plus side, the seller says this Lagonda has been sitting for many years and is “a great restoration candidate.” Get ready to roll up your sleeves if this is your kind of project, because this car is going to need a lot of work.

Originally finished in black, the ’83 saloon has the squared-off headlamps and tiny (by today’s standards) grille that was in step with cars like the Lamborghini Countach, BMW M1, and Lotus Esprit of the same era. The William Towns-designed bodywork is of the distinctive “folded paper” style with sharp, clearly-defined edges.

Inside, the Lagonda’s beige interior appears to be mostly intact–including the walnut veneer –which may be somewhat of a miracle. Its trunk is a different story, and the roof is roached. The V8 is coated with rust. The seller says it comes with an automatic transmission, air conditioning, power windows and steering, and it rides on steel wheels wrapped in white line tires; a spare comes with the car.

The Drive’s Mike Spinelli wrote an ode to the Lagonda and he describes the original engine poetically:

“The 5.3-liter, dual-overhead-cam V8 is similar to that in the AM V8 coupe of its era. To match the torque demands of the heavier sedan, the team changed the inlet manifold and added different heads with larger valves to compensate for a downsized air box wedged into the Series 2's smaller engine compartment. In its revised state of tune, the Weber-carbureted V8 produced 280 horsepower at 5,000 rpm and 350 lb-ft of torque at 4,500 rpm. (A turbocharged version producing 380 HP was said to have been tested, but later abandoned to reliability concerns.) To the crank was fitted the same Chrysler TorqueFlite three-speed automatic that dealt gears in the Maserati Quattroporte of the same era.”

"How an Oddball Car of the Future Saved Aston Martin, and Almost Killed It"

I am enamored with the current line of Aston Martins and each one is a singular experience to drive. If you've been dreaming about a 1983 Lagonda and have the skills to return this to its former glory, this may be your jam. When it's whole, this razor-edge sedan is a gorgeous sight to behold.

Over the course of two days, I spent time in five different Aston Martins to get a feel for their strengths and weaknesses.