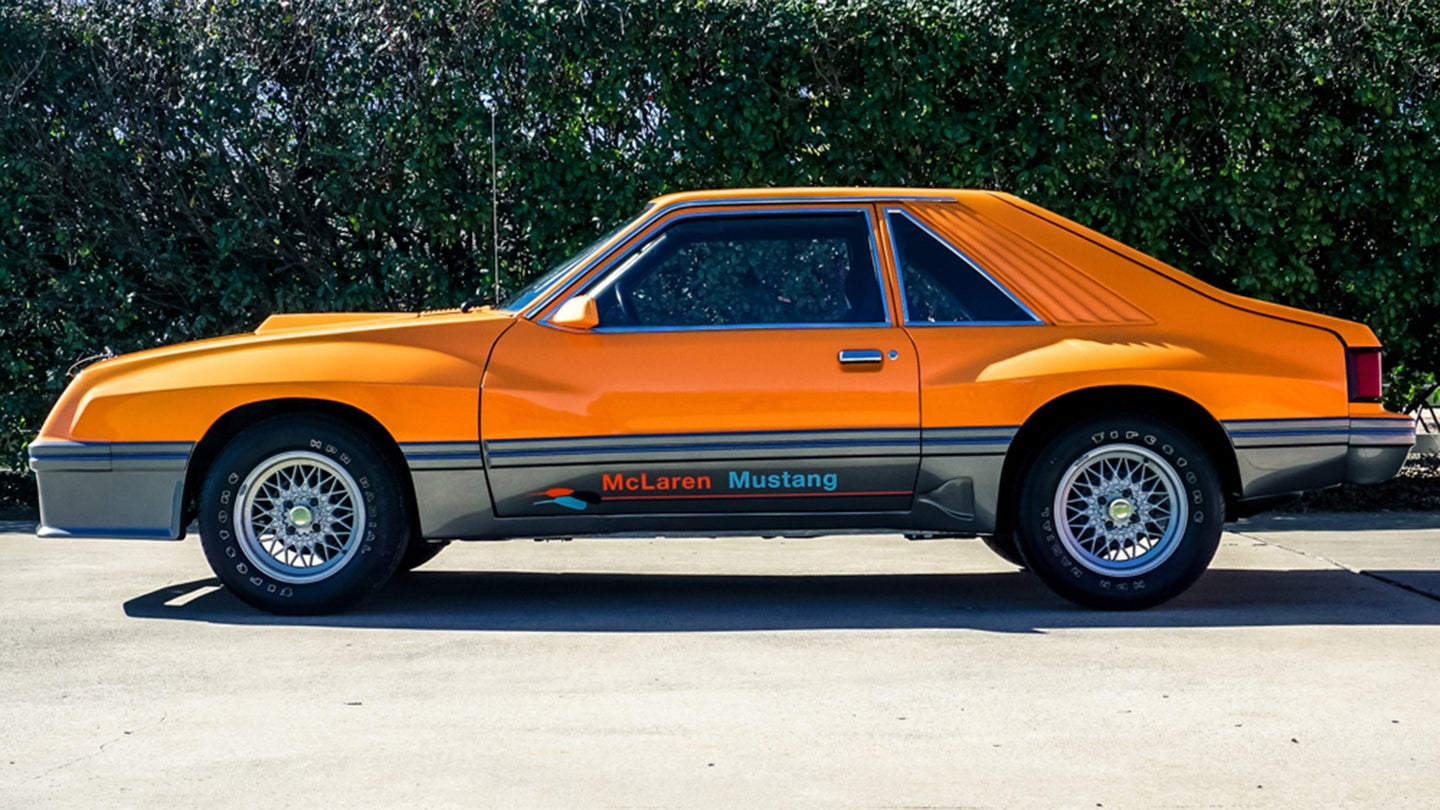 Early Fox body Ford Mustangs are often deemed the least desired of the historical herd. Saddled with primitive emissions equipment, downsized engines, and new-at-the-time safety regulations, they sit at an unfortunate nexus between the hard-charging antecedents of the 1960s and early '70s and the new millennium's modern sports cars. But there are still some diamonds in the rough, including this 1980 Ford McLaren Mustang M81 set to be auctioned off by Barrett-Jackson in Scottsdale next week—and said to be one of the rarest Mustangs in the world.

The backstory begins in the late 1970s, as Ford was trying to move past the Mustang II and get people excited about its 2.3-liter four-cylinder turbo engine that would serve as a midrange option below the V8s in the third-gen model. (Sound familiar?) The company decided to partner with McLaren in 1980—at that point still a racing and powertrain engineering shop—to create a joint Mustang prototype showcasing a hand-built McLaren engine and the breadth of Ford's off-the-shelf motorsports parts inventory. The concept was quickly greenlit and scheduled for a limited production run of 249 cars. However, only 10 were produced before slow sales and a $25,000 price tag (around $75,000 today) scuttled the project, and of those just seven were swathed in aptly-named Bittersweet Orange paint.

It started life as your usual 1980 Fox-body Cobra with the 131-horsepower, 2.3-liter turbocharged four-cylinder. The engine and four-speed manual transmission were then blueprinted, disassembled, deburred, and rebuilt by hand by McLaren's engineering team in Livonia, Michigan and topped with a Garret T-3 turbocharger with variable boost control. The result of that meticulous work was 175 horsepower (and as much as 190 on full boost), 145 pound-feet of torque, and a 0-60 mph time of just under 10 seconds. Hey, it was a different time.

Besides, changes weren’t just confined to the engine. According to Hagerty, body modifications like the grille-less front, bulging hood, wide steel fender flares, functional brake ducts, and BBS wheels were the work of Creative Car Craft. Below the tweaked sheet metal, an adjustable Koni suspension with heavy-duty sway bars and high-rate springs, upgraded brakes, Firestone HPR tires, and a bolt-in roll bar ensured the McLaren Mustang handled like no other Ford. And inside, touches like Recaro seats, a Racemark steering wheel, Stewart-Warner instrument gauges, and optional air conditioning matched the modus operandi.

There’s no reserve listed on the Barrett-Jackson auction, but one 5,000-mile example sold on Bring a Trailer back in 2016 for $36,250. We expect this one to sell for a little bit more since it reportedly has done just 524 miles. Rare and ready to rock—now that's a winning combination.