Get ready, because it's going up for auction with no reserve. 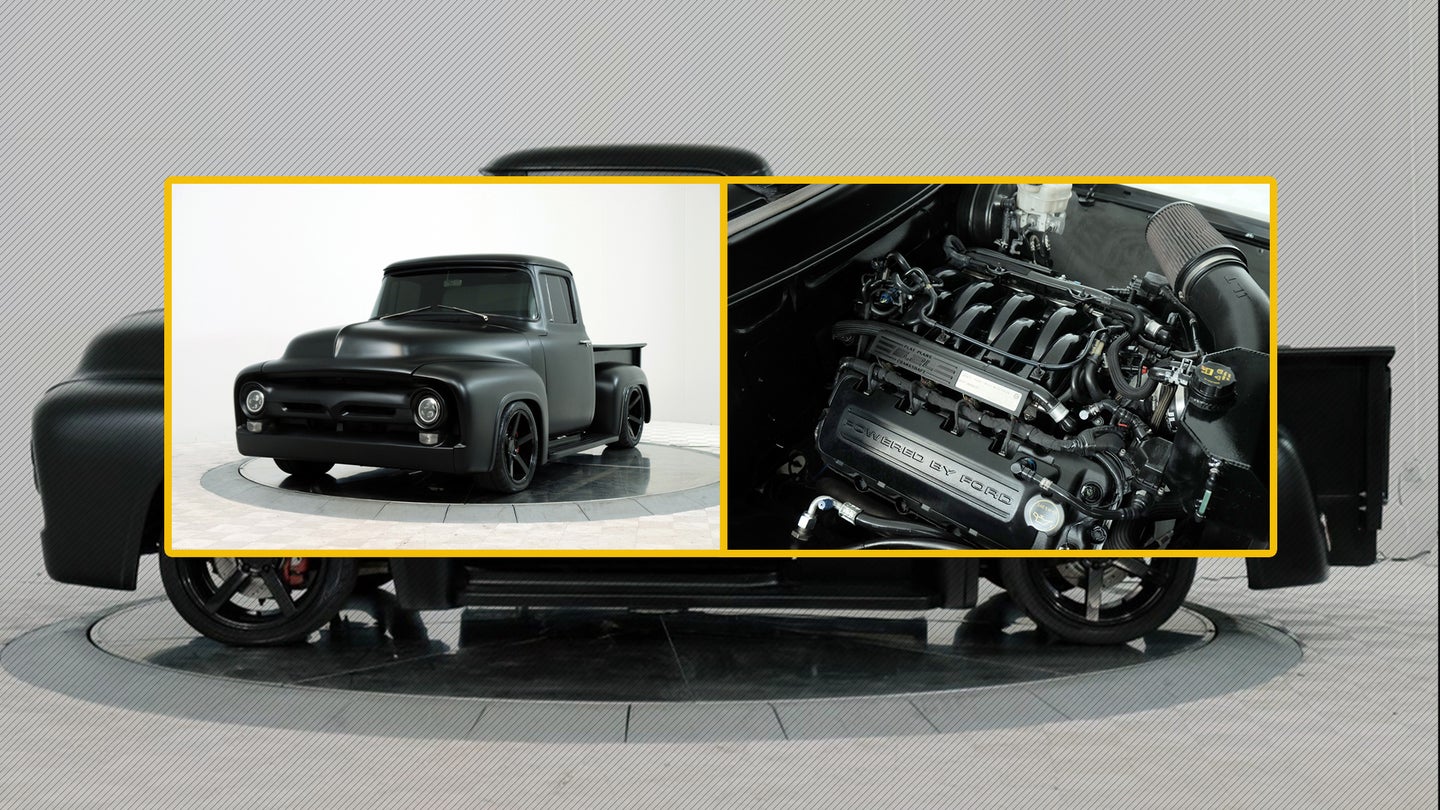 To this point, Ford's modern "Coyote" V8 engine—found in 2011-present Mustang GTs—has been the go-to power plant for Dearborn fanboys looking to keep their restomods all-in-the-family. It makes sense, too, since it squeezes as much as 460 horsepower out of 5.0 liters in stock form. However, there's a more potent and unique offering: the flat-plane crank, 5.2-liter V8 out of the Mustang Shelby GT350. That's what's underneath the hood of this all-black '56 Ford F-100, and it'll surely help it stand out amongst the crowd at Barrett-Jackson's 2020 Scottsdale event.

West Atlanta Hot Rods took on this project with plans of going full-bore, from the "VooDoo" engine to the boxed frame that was custom-built to fit the truck's new running gear. A set of Kooks headers manages the F-100's audible grunt, and mated to the 5.2-liter is a six-speed Tremec gearbox also found in the GT350. The package is all pulled together by Cobra independent rear and front suspension setups, which helps the 64-year-old machine handle like a modern pony car.

As you'd expect, there's a host of one-off details that are specific to this build. The rear fenders have been widened by three inches and, inside the bed, there's a special insert with the Shelby Cobra logo. A smoothed tailgate and shaved turn signals hark back to the hot rod style of yesteryear, as does the rear roll pan.

The interior is a hotbed for contemporary upgrades, featuring a custom console with LED lighting that houses a thumping audio system and even a backup camera display. Leather bucket seats set the sporty tone, and the GT350's precision-focused shifter setup has been carried over in a spectacular nod to the new-school.

Capping off the bespoke pickup is what looks to be a spectacular degree of fit and finish, from the retro-inspired cabin to the completely redone exterior. It was apparently brought down to bare metal and then resprayed in Keystone Satin Black, ensuring that the paint quality is as good as if not better than when the truck was new.

There's no reserve placed on the Ford and it's hard to gauge what it might go for but, given its company at the Barrett-Jackson Scottsdale sale, we reckon it'll fetch a pretty penny with the right bidder in the audience. In the meantime, we'll be dreaming up a legendary restomod of our own...