Amazingly, this tribute was built upon a car that was once thought to be beyond repair. 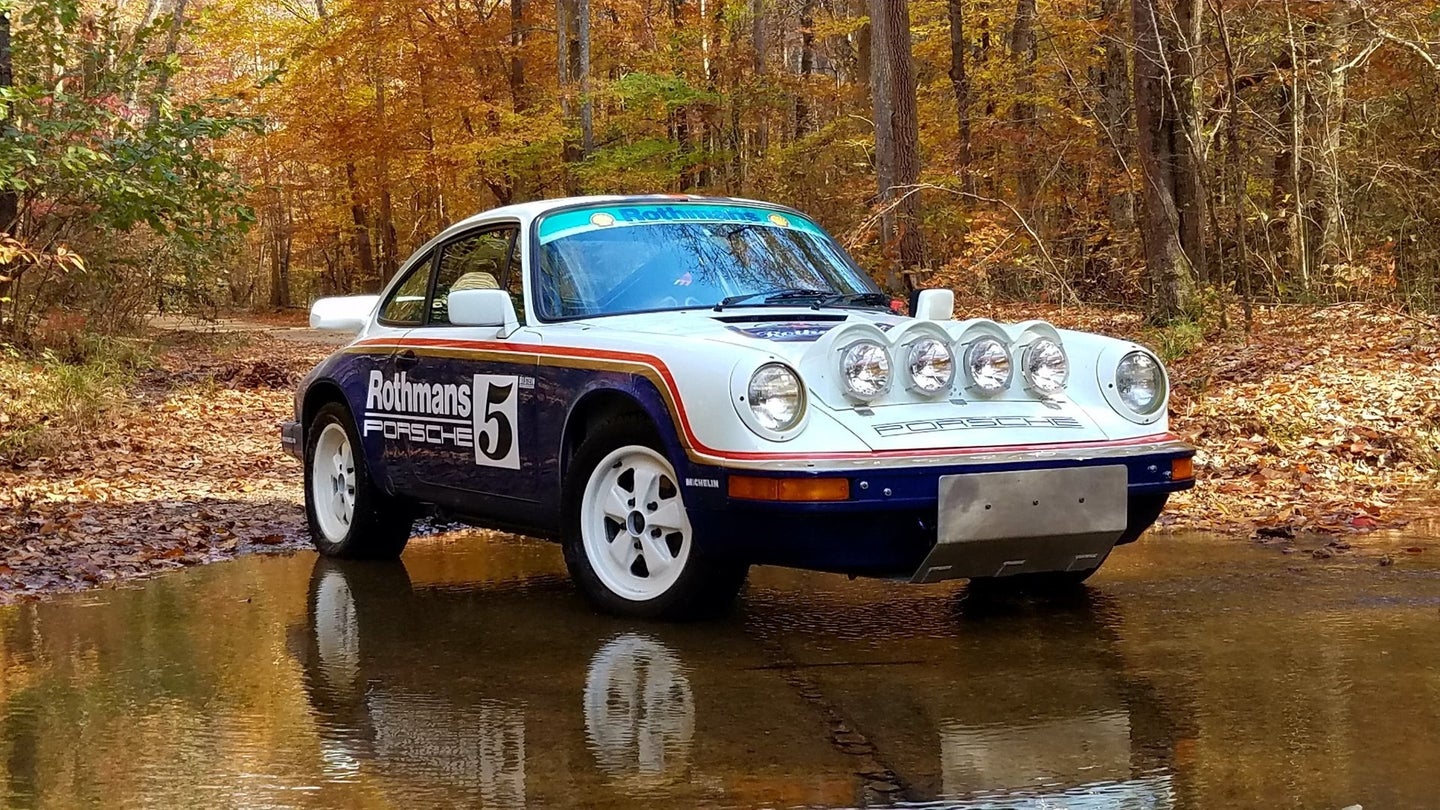 If you've got an undying affection for Porsche rally cars but can't afford a legendary Group B 959, then this 1983 911 SC/RS Rothmans Rally replica on AutoTrader could help scratch the itch.

This Porsche 911 SC/RS pays tribute to one of the most coveted P-Cars of 1980s motorsports. During the first half of that decade, engineers in Zuffenhausen produced 20 specially-built 911 SC RSs to satisfy Group B FIA homologation requirements. With the help of Prodrive, who purposefully modified each example, and the deep pockets of Rothmans tobacco, the automaker was able to participate in the 1984 European Rally Championship as well as the inaugural Middle Eastern Rally Championship.

The original car started life as a 930 Turbo, a.k.a. “The Widowmaker,” and was then extensively made over with a lift kit, knobby tires, and tough-as-nails underbody protection. While it retained the same widened fender flares and bodywork as the 930, its turbocharged flat-six was replaced with a 255-horsepower, naturally aspirated 3.0-liter. Although it wasn’t as powerful as the original 930 Turbo’s engine, it still did zero-to-60 miles per hour in 4.9 seconds. The 911 SC/RS also featured rear-wheel-drive only, as opposed to the 959’s pioneering all-wheel system.

This specific car is based off a 1983 911 SC and is being sold by Trissl Sports Cars in Florence, Alabama. As its story apparently goes, according to the sale description, the original donor car was in a state of disrepair and needed a full restoration. But instead of conducting the restoration, the outlet instead made it into a replica of the Rothmans Rally car from the East African Safari stage of the FIA competition that year.

The majority of the 911's work was custom fabricated, all to replicate the original and iconically liveried car, with a few modernized modifications.

Trissel Sports Cars attempted to sell this car back in 2018 and according to AutoTrader’s vertical, it was listed for $139,000. The new listing has it priced considerably lower at $123,942.

If you need a frame of reference for how much more expensive aircooled Porsches are now compared to a decade ago, check this out: back in 2007, a legitimate Ex-Rothmans Rally Team 1984 Porsche 911 SC Rally Coupe sold at Bonhams for around $48,935. If you didn't buy in before, it looks like you've missed the boat.