Arizona State University's Human-Oriented Robotics and Control Lab is developing the foundation for these mind-controlled fleets. 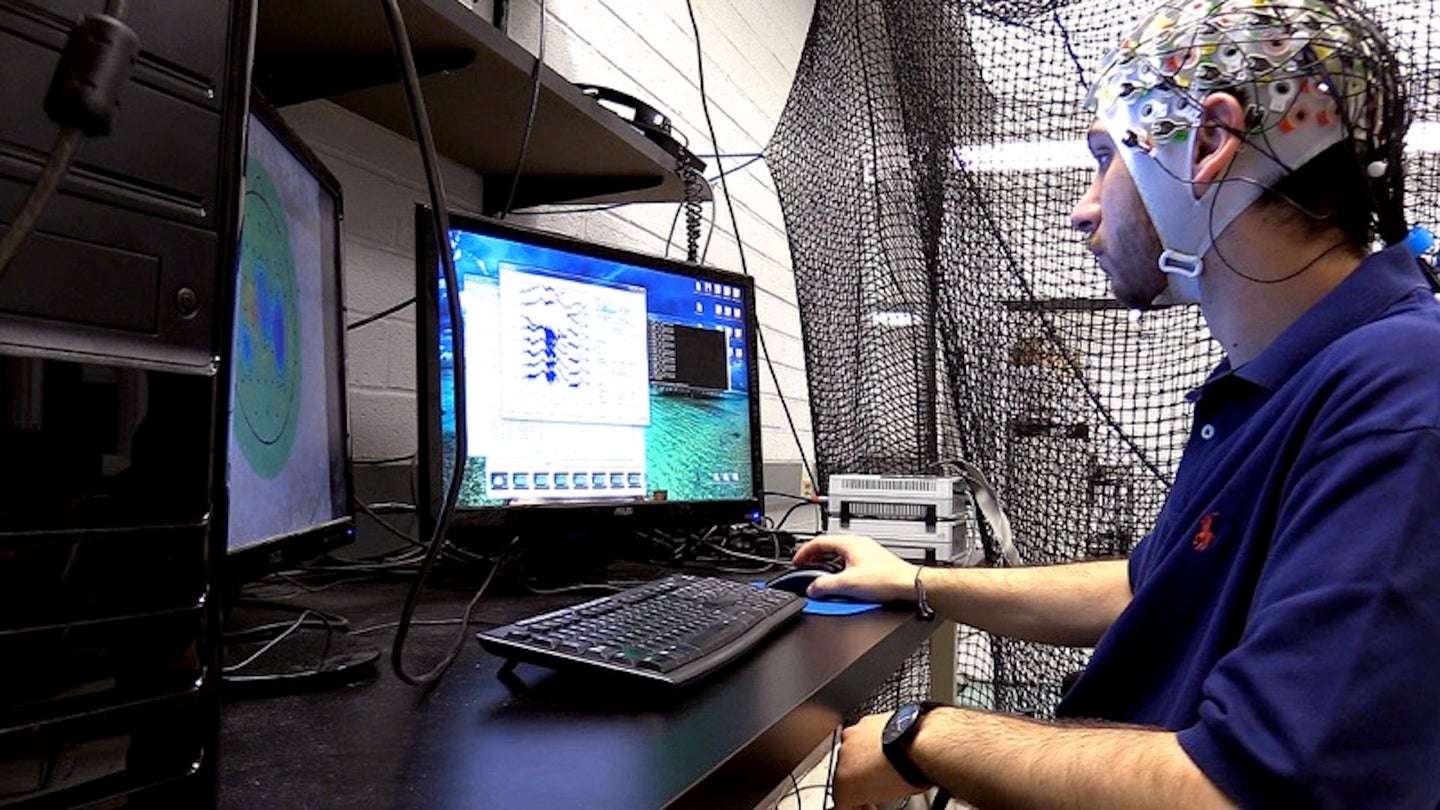 Drones, like many other of our contemporary technologies, were once a figment of the imagination. They were more in line with science-fiction, like controlling a machine with your mind. Well, it appears that Panagiotis Artemiadis, the head of Arizona State University’s Human-Oriented Robotics and Control Lab, is working on developing a brain-controlled drone navigation interface that would firmly place this into the tangible reality column.

According to the Abstract of Artemiadis’ project, which has been supported by the Defense Advanced Research Projects Agency (commonly known as DARPA), the ultimate goal here is to find brain mechanisms that allow for one human operator to “perceive multi-agent systems information" in order to then extract “control commands” for those systems. In other words, Artemiadis is trying to establish a system in which one person can control a swarm of drones, each unmanned aerial vehicle differing in their commands and behaviors.

Now, we’ve made quite a few strides in the symbiosis between humans and robotics in the past decade, such as allowing amputees to command their mechanized limbs with their thoughts. This biotech connection has already been moving toward a more complete understanding, but it’s still fairly mind-blowing to see these advances in action. Let’s take a look at Arizona State University’s Human-Oriented Robotics and Control Lab, shall we?

As Seeker reports, Artemiadis and his research team have a clear process.

“We first train the human subjects to be able to imagine those behaviors,” Artemiadis says, referring to commands or movements. “Then we train an algorithm to relate those behaviors to activations from different parts of the brain,” Artemiadis explains. Commands are sent to the drone through an electroencephalogram, which is that cyberpunkish swimming cap you see up top.

Artemiadis is adamant about the substantial benefits to developing this system, in which one pilot commands multiple, seemingly independent drones. The variety of uses is clear, when you ponder how much quicker mapping a farm would be, inspecting 100 wind turbines simultaneously, or how much more efficient search and rescue missions would be. Of course, these systems would also allow for an extreme increase in surveillance capabilities, a fear many people certainly share. Artemiadis seems more keen on developing a system that reflects the user’s imagination, however, regarding UAV formations and movements. It's the more refined control over the drones that he seems to be attracted to.

This “swarming paradigm, deriving inspiration from the behavior of natural swarms such as bird flocks and fish schools, offers myriad advantages to a team of drones. We can extract information related to the desired collective behaviors, like flying to a specific formation, that is not possible with manual control interfaces,” he says.

The truly shocking image Artemiadis puts forth is when he says that “as long as there is a centralized controller that can communicate the commands to the drones, the brain-swarm control algorithm is scalable to hundreds of thousands of them.”

DARPA definitely understands which projects to back with funding, when it comes to feasibility and practical use, which bolsters Artemiadis argument even more. It’s fairly safe to say that mind-controlled drone fleets are coming. It’s just a matter of time.