A yoke with steering-by-wire will be coming in the future. 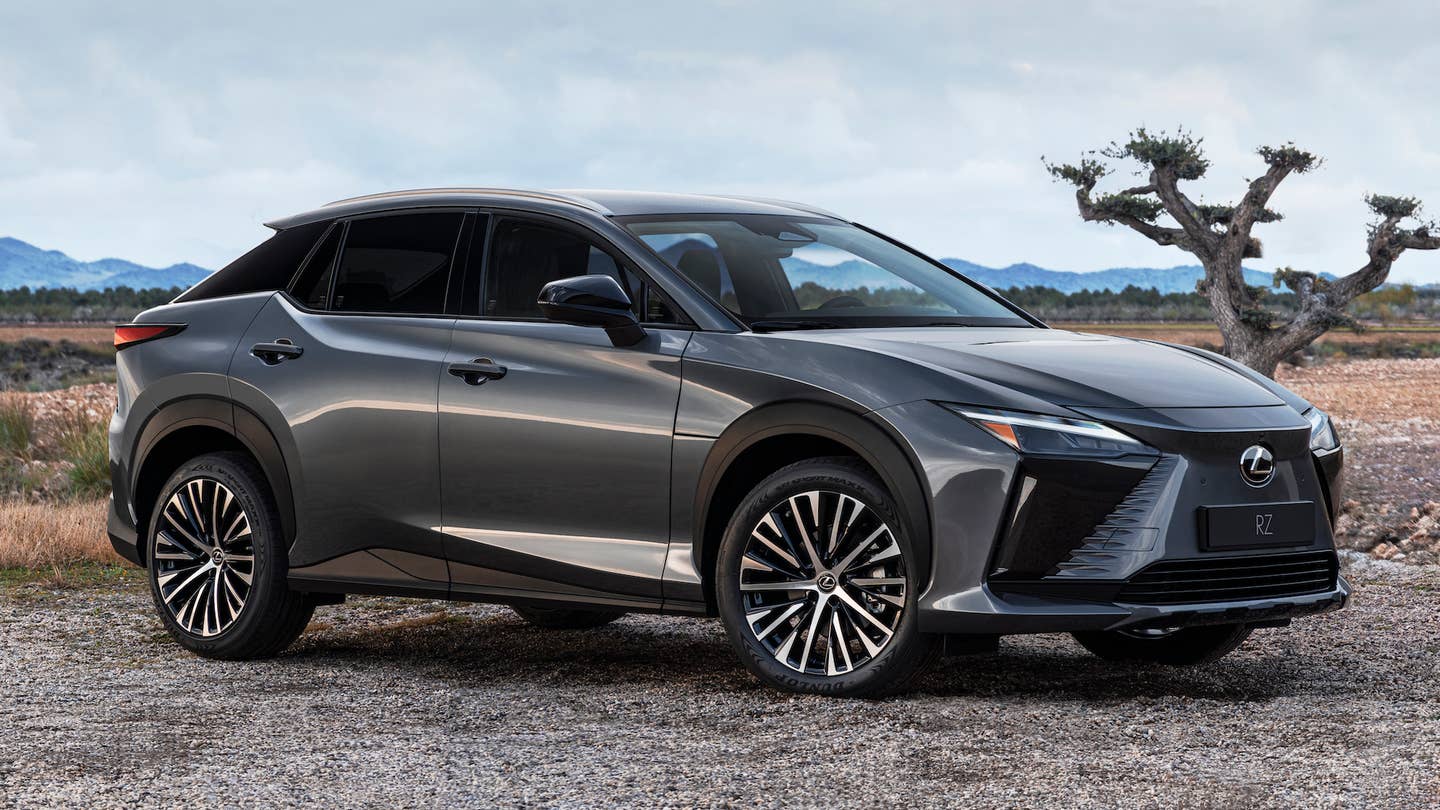 With mainstream parent company Toyota finally getting into the electric car game with its Subaru-collab bZ4X, Lexus is doing the same with the 2023 Lexus RZ450e, the Japanese luxury brand's first global BEV. Meaning that, yes, this is coming to the U.S. unlike Lexus' actual first EV, the UX 300e.

Here are the headline specs: Lexus says its extensive experience with hybrid tech has helped it concoct an all-wheel-drive electric crossover with an estimated driving range of—drum roll, please—225 miles. While this figure matches closely to that of the AWD bZ4X, it still seems... decidedly meh considering this car was created by literally the world's biggest automaker, with all of its resources and supposed electrified-car engineering prowess. For contrast, the AWD Hyundai Ioniq 5 claims 256 miles while the Tesla Model Y Long Range is estimated to do 318 miles.

The RZ450e uses a new dual-motor AWD system Lexus calls "Direct4" using a 150-kW front motor and a 80-kW unit in the rear, adding up to 308 total horsepower. It's all built around a new, EV-dedicated platform Toyota calls e-TNGA (as in the electric version of Toyota's New Global Architecture) consisting of a floor-mounted 71.4-kWh battery, lots of bracing, laser welding, MacPherson struts up front, trailing arm double wishbones in the rear, and something called Frequency Reactive Dampers that promises enhanced stability without sacrificing ride comfort.

Design-wise, it exudes fairly typical Lexus crossover vibes with, of course, an electric slant. Sporting a closed-off, EV rendition of the company's famous spindle grille, the RZ looks a bit like a "coupe" version of a would-be next-gen RX. In terms of raw dimensions, the RZ is only slightly smaller than the RX in length and height (by about three inches) while having the exact same width. A two-tone paint option can black out the roof, hood, and grille area in contrast with another color.

When this car was previously teased, it was shown off with a yoke instead of a steering wheel. This will apparently be paired with Lexus' new steer-by-wire system that, for better or worse, won't be available at launch in the U.S. but will be coming to the model at a later date. Lexus says this steer-by-wire system has an approximate angle of 150 degrees and eliminates the need for hand-over-hand maneuvers—even while pulling U-turns and parking, hence the yoke. The yoke is said to allow for lower instruments and better outward visibility, while Lexus' steer-by-wire system is apparently able to feed road feedback to the hands electrically. In any case, the provided press photos show the RZ with an old-fashioned, perfectly round steering wheel and it looks like that's what the car will come with at launch.

As another Lexus first, the RZ will use radiant heaters to keep its occupants' knees warm while consuming less energy. Further adding to this crossover's green credentials are seats partly made of ultrasuede, 30 percent of which comes from bio-based sustainable material.

Acoustic glass is used for the front and rear doors to keep noise out and, par for the new EV course, the RZ will also feature in-cabin speaker-fed acceleration noises in the absence of a rumbling combustion engine. The standard panoramic roof can be optioned with a dimming function while the same steering wheel controls and reworked 14-inch infotainment have been carried over from the new NX and LX. Lexus Safety System+ 3.0 is on board and encompasses pre-collision, dynamic radar cruise, lane departure alert, and emergency driving stop system.

The 2023 Lexus RZ450e is going on sale near the end of the year and will be the first step in a journey Lexus wants to end in it having a "full lineup" of available BEVs by 2030 before selling nothing but BEVs five years after that.

Got a tip or question for the author about the new Lexus RZ? You can reach him here: chris.tsui@thedrive.com