SUVs Have Gotten Too Big and Aggressive. EVs Might Just Change That

Electric SUVs offer all the same benefits that their gasoline-driven counterparts do. But will buyers see these lower and sleeker cars as “real” SUVs? 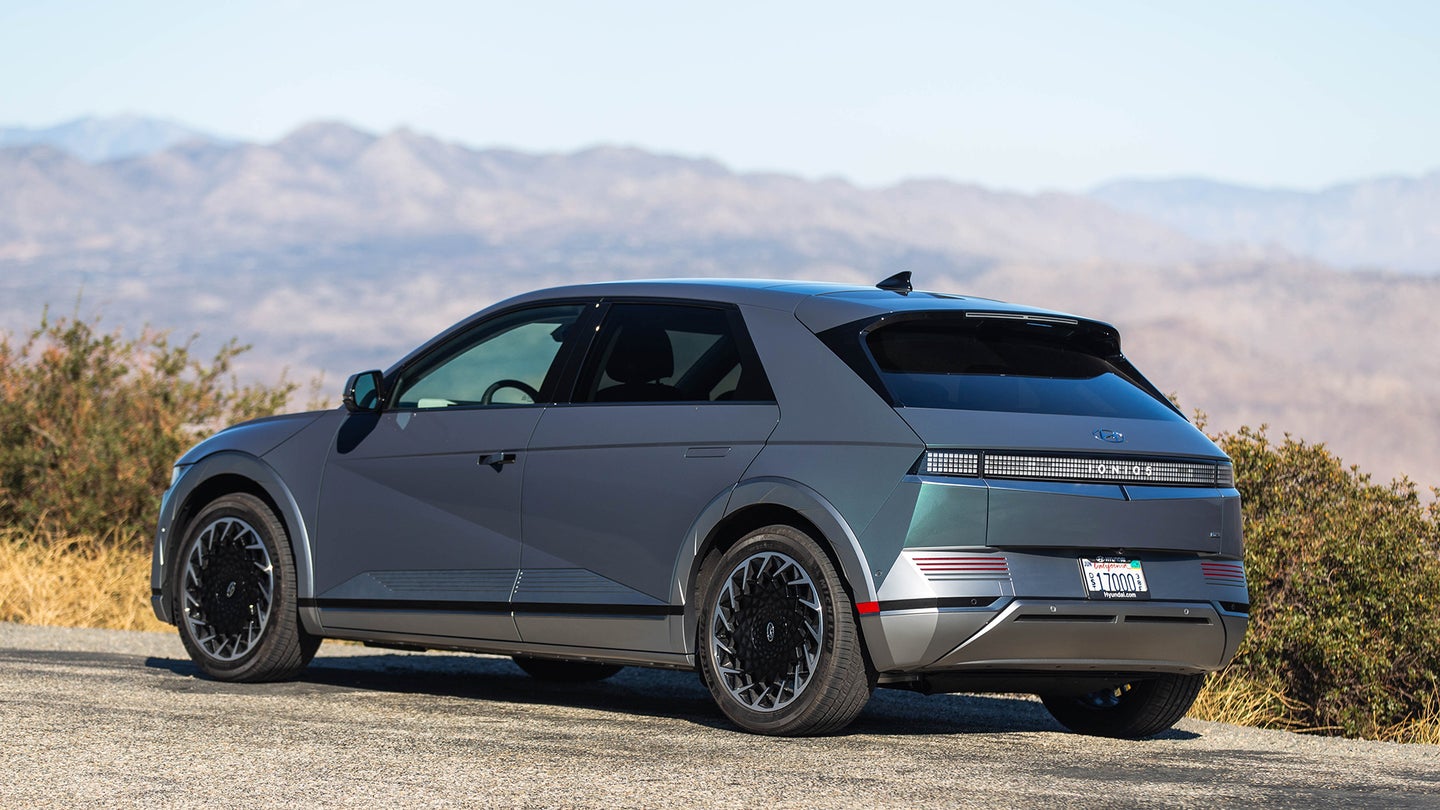 What is an SUV? It’s a question that’s bedeviled auto writers and buyers alike for decades.

An SUV used to be obvious: It was a 1984 Jeep Cherokee, or a 1990 Ford Explorer, the first two truly high-volume vehicles that took families out of wagons and into the new, fast-growing segment of utility vehicles three decades ago.

But soon it got messy. How do you define the late 1990s Honda CR-V, Subaru Forester, and Toyota RAV4? What about the 2003 Infiniti FX or 2008 BMW X6? The first three were far smaller than any American SUV when launched—and none were built on truck underpinnings. The latter two ignored the slab-sided two-box shape pioneered by the Cherokee and Explorer altogether.

But one thing’s remained consistent: As SUVs have multiplied throughout every segment, they get larger and usually more aggressive-looking each time a new generation arrives. The 2022 Toyota RAV4 is 17 inches longer than its four-door counterpart of 1996. In fact, today’s RAV4 is just four inches shorter than the mid-size 2000 Highlander model. As those highest-volume SUVs swell in size, their tall, bluff proportions haven’t changed much, except the windows have gotten shorter and cowls have gotten higher to make the structures stronger. Front fascias get frownier as corners sweep and taper into sharp points and angles. And so it goes.

Now, the advent of a slew of battery-electric vehicles marketed as SUVs or crossovers only makes classifying things more complicated. Reducing wind resistance is crucial to getting more range out of battery-powered cars and the easiest way to do that is with teardrop shapes that minimize the cross-sectional area—but the resulting vehicle is far lower and less aggressive in your rear-view mirror. A shape with a lower nose and fewer blocky lines.

Next time you see one on the street, look more closely at a Ford Mustang Mach-E, Hyundai Ioniq 5, Kia EV6, Nissan Ariya, Tesla Model Y, or Volkswagen ID.4. All are crossovers, but none are remotely similar in shape to, say, a Subaru Forester or Ford Bronco Sport. Their looks are kinder. Gentler. You have aerodynamics to thank for this: its effect on electric vehicles will likely reverse that trend of SUVs growing bigger and meaner with each new generation.

A History of Light Trucks and Bringing Safety Up to Snuff

The original reason SUVs were sold was largely specious: A higher, heavier, truckier vehicle was widely assumed to be “safer,” and auto companies did nothing to dispel that concept, even though it largely isn’t true. In part that was because, in the 1980s and 1990s, SUVs fell into the “light truck” category originally intended only for pickup trucks and things like the Chevy Suburban—meaning they had to meet less stringent safety and emission requirements.

Within the decade from 1990 to 2000, the safety deficiencies of truck-based SUVs came to light. They were taller, heavier vehicles than the pickup trucks the earliest models were based on. (If you want a fuller history, the whole story is covered at length by Keith Bradsher in his 2002 book, High and Mighty: SUVs—The World’s Most Dangerous Vehicles and How They Got That Way.) By 2000, things like the massive recall of Firestone tires involved in Ford Explorer rollovers had convinced the public it wanted safer SUVs.

Perhaps to alleviate some of that confusion, the auto industry developed the phrase “crossover utility vehicle” to denote a vehicle like an SUV but that was based on a unibody passenger-car platform. (It’s still not clear that car buyers understand what a “crossover” is, or how it differs from a “real” SUV.)

These days, no compact crossovers use body-on-frame truck underpinnings, and only a few mid-sized ones do. Even full-size SUVs like the Chevy Tahoe and Suburban, Ford Expedition, and Jeep Grand Wagoneer use modified truck chassis with independent rear suspension to improve their ride and handling. And these days, buyers demand—and makers supply—the same top safety ratings on utility vehicles they have long required in cars.

But there’s no question SUVs of all sizes have soared in popularity—not just in North America but globally. Recent data from the International Energy Agency notes SUVs are on track to account for a whopping 45 percent of global sales this year. Luckily, EV sales are also increasing fast enough that the additional fuel burned by SUVs over conventional passenger cars is almost offset.

The SUV-sized EVs do and will meet those same safety standards. Because many are technological halo cars for their makers, they’re often fitted with the most advanced technology and active-safety features on offer. So, crash safety probably won’t be an issue. And alarmist headlines aside, battery fires show little sign of being a risk either.

The real question is whether buyers will see these electric vehicles as SUVs or utility vehicles at all.

Nearly all EVs are lower and sleeker than almost anything sold as an SUV to date. They need to be. Because wind resistance is proportional to the square of the car’s speed, you use five times as much energy to travel at 70 mph as you do at 30 mph. But because gasoline cars waste roughly three-quarters of their energy in heat and noise, that increase only comes from the 25 percent of the fuel used to propel the car forward, so the change in fuel efficiency is much smaller. EVs regenerate energy to recharge the battery when they slow down (which no gasoline car does), so they’re more efficient at lower speeds than at higher ones—the reverse of gasoline cars.

EVs use so much more of their onboard energy to move the vehicle (against those wasteful gasoline cars) that lowering wind resistance is vital to delivering that all-important EPA range rating. The smaller and sleeker the EV, the less wind it has to push aside. The wind resistance in a car at speed is a function of its drag coefficient and its frontal area, or cross-section. In real life, the width of a vehicle can’t vary all that much, but reducing its height by lowering the roof reduces the cross-section significantly.

The subsequent car is closer in design and dimensions to traditional wagons or hatchbacks—both terms that send salespeople fleeing from the room in terror. U.S. car buyers love SUVs, it turns out, but hate hatchbacks. And they’ve largely forgotten wagons exist—except in nostalgic reminiscences by parents or grandparents about the Good Old Days (you know, the 1980s).

Consider the Volkswagen ID.4 against its conventional compact crossover counterpart, the Tiguan. With a more vertical tailgate, has the proportions of a wagon (though it doesn’t share sheet metal with any sedan, the definition of a wagon for many decades). It is also half an inch wider, but almost two inches lower than the Tiguan. The Tesla Model Y is arguably a taller Model 3 with a hatch; it has nothing like the two-box shape of an SUV. The Mustang Mach-E may be its own, highly contentious, category of one, but its shape is far closer to that of a gasoline Mustang fastback than an SUV.

Then there’s the new Hyundai Ioniq 5. It doesn’t even have a third side window, which means it’s closer in design to a large hatchback than any kind of SUV. Its design has received much acclaim, with its homage to the Italdesign Giugiaro design of the Hyundai Pony 45 years ago. Auto historians draw parallels to the first generation of Volkswagen Golf (Rabbit in the U.S.) or the later Lancia Delta Integrale, both of them Giugiaro designs accepted decades later as classic shapes. Versus the same maker’s Tucson? The EV is an inch wider, but fully 2.5 inches lower.

The exception to the “kinder, gentler” rule, of course, is the GMC Hummer EV. That leviathan overcomes its staggering 9,200-pound weight and gigantic cross-section through brute force and a battery capacity of (roughly) a whopping 200 kilowatt-hours. That makes it by far the least efficient EV sold in North America, though it will undoubtedly accomplish its mission: to reset the image of EVs and make them badass.

Despite their shapes, each of the new EV SUVs offer the very utility features people buy regular SUVs for: all-wheel drive as standard or optional equipment, four doors, tailgates or cargo hatches, rear seats that fold down flat (or close). And because occupants sit on top of a battery pack under the cabin floor, their seating position is necessarily higher than a passenger car’s—giving drivers that same ease of ingress and egress and the higher outlook that are some of an SUV’s main selling points.

Up to the Buyers

Amidst much shrieking by parts of the press about the aggressiveness and danger of taller truck designs to cyclists, pedestrians, and even smaller-car drivers, EVs may offer a way to humanize the vehicles dubbed SUVs. Because they’re lower in profile, they loom less large in rearview mirrors. Most have lower, shorter, more raked noses that bring the base of a steeply angled windshield closer to the front of the car. And the need to smooth airflow over the front end to reduce turbulence means no large, toothy chrome grilles.

But the question still stands. Can a large hatch qualify as an SUV? Will consumers buy into these differently shaped vehicles as legitimate SUVs? It’s still too early to tell, but in due course, the market will answer that question. We don’t need vehicles that get taller and taller, towering around the drivers of “regular” cars. And is anyone beyond a truck bro really charmed by the aggro and over-designed fascias of today’s gasoline crossovers? (Lexus, we’re lookin’ at you…) Whether car shoppers accept the EV crossovers as SUVs may give us a sense of how flexible buyers’ sense of segments or categories will be.

Because if EVs can make SUVs lower and less aggressive, imagine what they might be able to do for full-size pickup trucks one day.

John Voelcker edited Green Car Reports for nine years, publishing more than 12,000 articles on hybrids, electric cars and other low- and zero-emission vehicles and the energy ecosystem around them. His work has appeared in print, online and radio outlets that include Wired, Popular Science, Tech Review, IEEE Spectrum and NPR's "All Things Considered."

Toyota Has a New EV Strategy. Here’s Where We Think It’s Headed

Toyota’s made no secret of its reluctance to join the battery-electric car movement. But given how everything is going, there really isn’t another choice.

The Texas Legislature has run out of time to advance a bill that would’ve allowed Tesla’s direct sales approach—and it doesn’t meet again until 2023.