The New 2021 Hyundai Tucson Looks Like a Production Concept Car

For the first time in the U.S., the Tucson is available with two hybrid drivetrain options, including a plug-in hybrid. 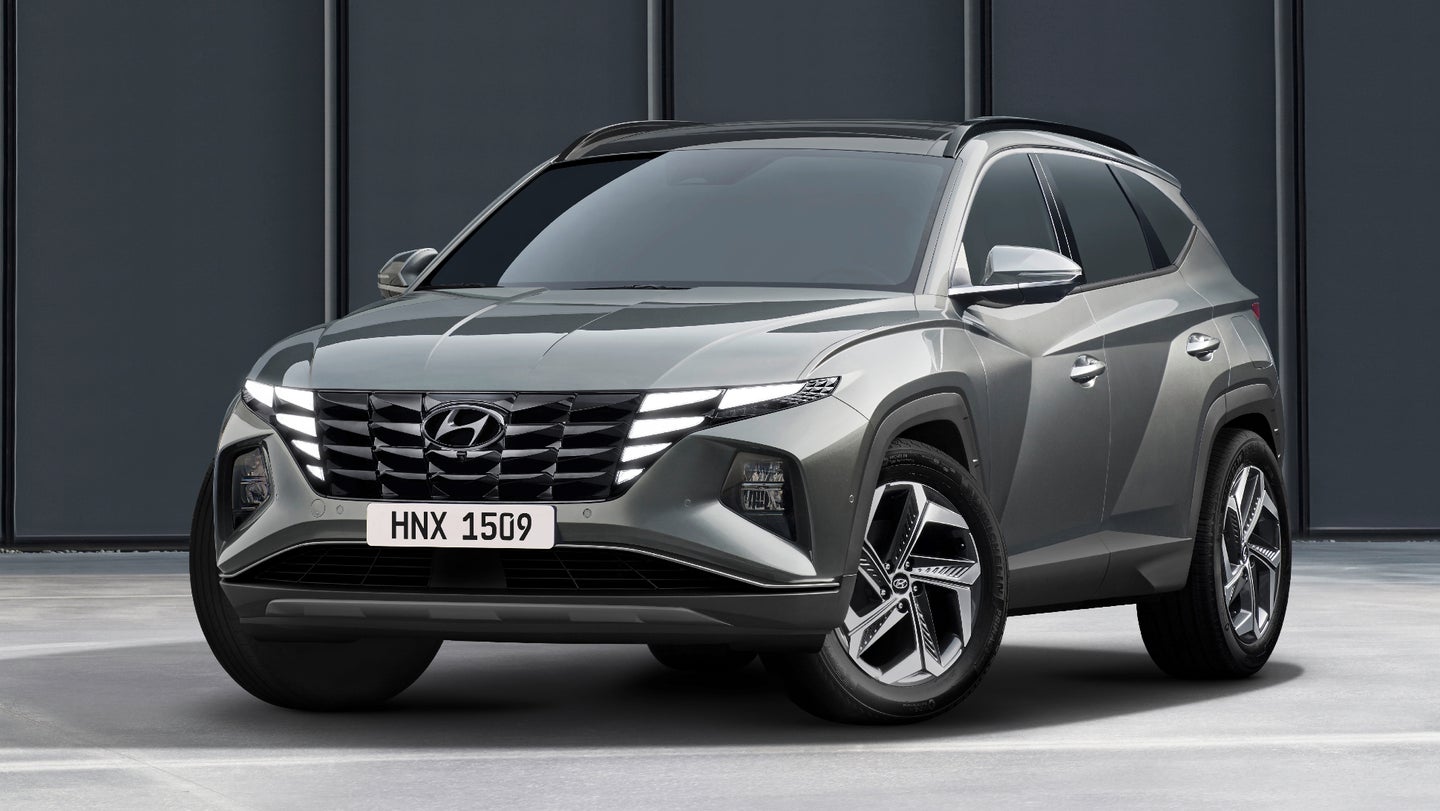 The production compact crossover that looks like it's straight off of an auto show concept stand is finally here. Hyundai officially unveiled its new 2021 Tucson today, which features available hybrid drivetrains for the first time in the U.S. as well as two different wheelbase lengths to suit customers' needs.

This new fourth-generation Tucson looks dramatically different from anything else in the segment, with exaggerated, angular fender flares and daytime running lights that blend into the jewel-like triangle shapes of the grille when they're off.

The full-width taillights are pretty slick, too, as they also illuminate hidden triangles that you can only see when the lights are on. The rear wiper blade tucks neatly under the rear spoiler as part of the Tucson's sleek, ultra-modern design.

The interior is a much simpler design than the exterior, with a touchscreen that sort of hovers over the rest of the dashboard. Top trims get a 10.25-inch touchscreen with split-screen capabilities, whereas other models get an 8-inch touchscreen. Unfortunately for fans of physical buttons, there aren't any hard buttons to press on the center dashboard stack. The gauge cluster is completely digital, too, and lacks a hood so as to blend in more seamlessly with the rest of the interior design.

The Tucson also features voice controls if you'd prefer to control key functions that way, including one to "warm up the car," which turns on the heated steering wheel, heated seats and interior heater all at once.

Not only does it come with Apple CarPlay and Android Auto, but the Tucson allows users to connect two phones at one time, switching between devices without having to connect and reconnect.

The Tucson launches with three different drivetrain options. The conventional gasoline-powered option is is a 2.5-liter direct-injected four-cylinder gas engine, good for 187 horsepower and 182 pound-feet of torque. This one is paired to an eight-speed automatic transmission.

Then there are a couple hybrid drivetrains: either a plugless or plug-in hybrid mated to a 1.6-liter direct-injected turbocharged four-cylinder engine. This is the more powerful way to go, with a combined powertrain output of 227 hp. The torque numbers suggest that this drivetrain could be pretty fun, with the hybrid system contributing 258 lb-ft. of torque and the gasoline engine making 195 lb-ft of torque. Hyundai's Continuously Variable Valve Duration tech manages valve openings of the 1.6-liter internal combustion engine to optimize power, emissions and efficiency.

All Tucsons come with Hyundai's HTRAC all-wheel-drive system, which has a number of selectable drive modes: Eco, Comfort, Smart and Sport, plus Mud, Sand and Snow in select markets. Hybrid versions get the marque's E-Handling tech for improved steering response, cornering and ability in poor weather.

As far as safety features go, the 2022 Tucson offers Hyundai's full SmartSense safety suite, which includes a lot of the expected tech in a modern-day crossover: forward collision-avoidance assists with pedestrian detection, lane-keeping assist, lane-following assist, automatic high beams, blind-spot collision warnings with view monitors, highway driving assist, driver attention warning,  reverse collision avoidance assist, plus some truly trick tech in the Remote Smart Parking Assist, where you can let your car pull in and out of spaces even if you're not in it. Blind spot collision avoidance, rear cross-traffic collision avoidance and smart cruise control are also available on the Tucson.

Another trick tech feature that comes with the new Tucson is the Digital Key, which turns the phone into a smart key using Near Field Communication. You can start the engine and its climate control system, unlock and lock the vehicle and set off a panic alert from up to 90 feet away.

You can control your home with the Tucson, too, with its new Car-to-Home system, which connects to smart home devices such as appliances or climate controls.

Buyers can choose from seven colors, which thankfully include a couple actual colors: White Cream, Phantom Black, Shimmering Silver, Nocturne Gray, Amazon Gray, Flame Red, and Intense Blue. Interiors come in either black or grey, available in both leather and cloth. The second seats tuck down to offer up to 38.7 cubic feet of usable cargo space. There's also ambient interior lighting available in 64 colors with 10 levels of brightness.

The multi-air ventilation system monitors air quality and purifies it, reacting to real-time air pollution levels using a fine dust detection sensor. It also reduces moisture from the evaporator to keep things as free of odor as possible.

A hotter N Line version will also be offered globally for the first time, with a launch date yet to be announced. No details were confirmed yet, but prior reports say to expect 340 hp and a 0 to 62 mph time of under six seconds in the N Line version.