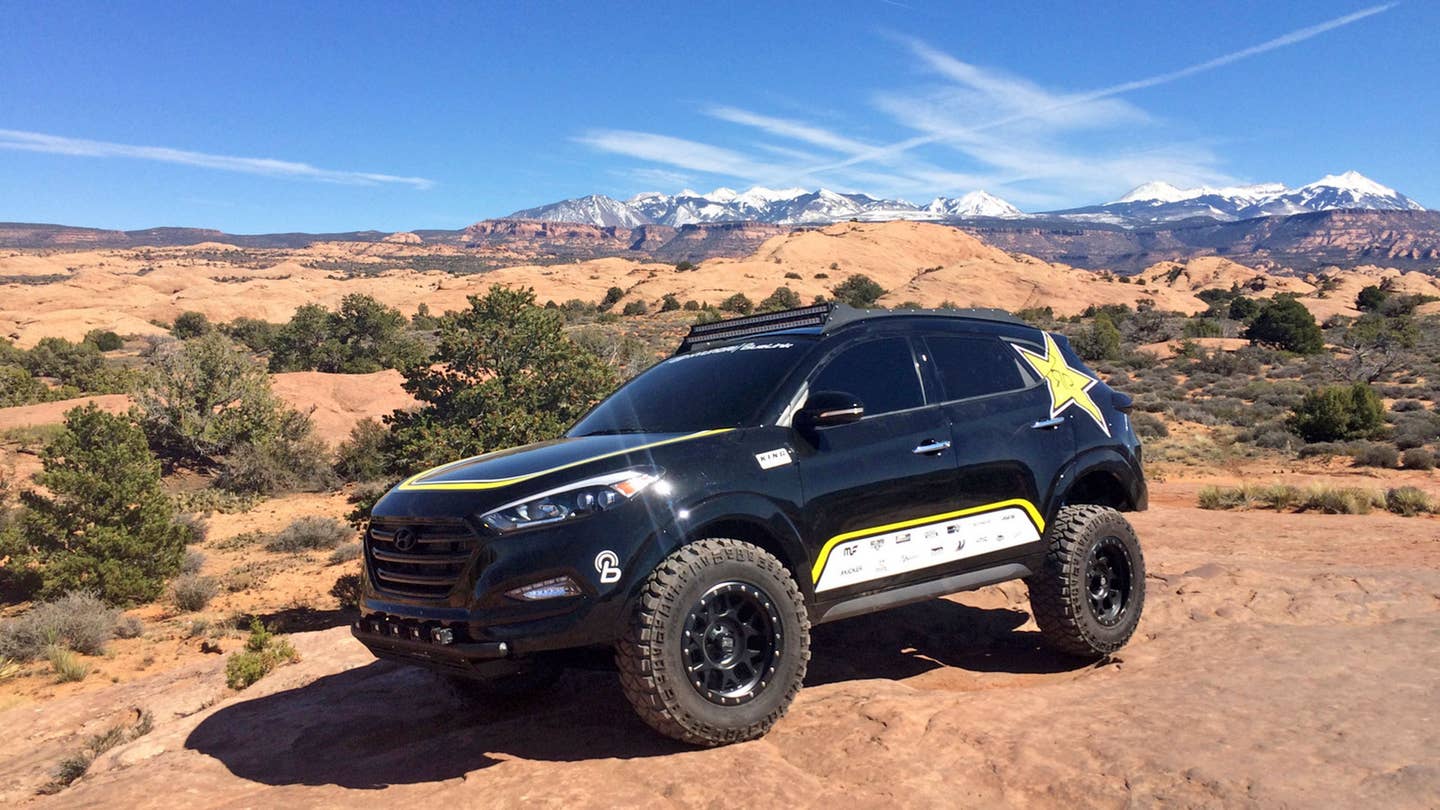 Under normal circumstances, the Hyundai Tucson, a mild-mannered crossover, will never leave paved roads. But the 50th annual Easter Jeep Safari in Moab, Utah, wasn't normal circumstances. And when you hand over a Tucson to Rockstar Performance Garage (RPG), normality fades still further.

We got a chance to drive a vehicle what, even among a burgeoning field of so-called offroad-capable small crossovers, sounds impossible: The Hyundai Tucson off-roader. The RPG Tucson is an outrageous beast of a thing compared with the chore-wagon from which it was created. That's because it was dreamed up for the annual SEMA show, in which almost every vehicle present is formulated to dazzle with bold colors, suggestive bulges and sheer stature.

To get the suspension ready for its departure from smooth roads, RPG installed custom adjustable struts and springs, 17-inch bead-lock wheels, 32-inch Mickey Thompson mud tires, custom-fabricated skid plates (to protect the engine oil pan and oil filter) and heat-treated axle shafts. Under the hood, the 1.6-liter turbo engine gets beefed-up turbo plumbing, a K&N cold air intake and a huge turbo intercooler. The Magnaflow muffler is just big enough to allow the little four-banger emit a tasteful rumble without letting it bleat like a wet fart through a long sewer pipe. (We're looking at you, Nineties Honda tuner bros).

In proper SEMA mule fashion, this particular Tucson sits significantly higher and looks much meaner than the stock version of itself.

Here's the thing, though: The SEMA show isn't Moab. The off-road trails around Moab are for real trucks. It's a sandstone sea roiled with a tempest of rocky boils and cataracts, a recipe for disaster in the wrong vehicle. The most effective way to traverse this challenging terrain is on foot, in a good pair of hiking boots. But the Easter Jeep Safari crowd likes a challenge. A well-built truck can crawl over just about any obstruction the trail can cough up, and the parade of Jeeps, Broncos, pickups and other jacked-up, big-tired rigs swooping up and down steep stone grades was a testament to man's determination to conquer this particular bit of nature.

So how did a Hyundai with a bunch of goodies do?

We took it out on Fins and Things, a federal Bureau of Land Management-administered slickrock trail just outside town. Stacked up against other trails in the area, it's classified as "easy." But don't let that fool you: Easy it may be in a tuned Jeep, there are spots where steep formations create obstacles that are a nightmare to crawl over.

The RPG Tucson took it all in stride. With a little bit of pushing, it made the 10-mile loop without leaving us stranded among the impassive rocks. My main concern when I hit the trail with RPG's Nic Ashby was that a bunch of guys in real trucks would drag us out and beat us for daring to bring something so, so... Korean out to the Easter Jeep Safari. But people seemed, at the very least, amused by it. It got a lot of smiles, and a few thumbs-up.

And the thing didn't roll off a trail or catch on fire. So that's good, too.

Not to say it was all smooth sailing. Weakness numero uno was the transmission: Designed to turn wheels that are roughly 27 inches in diameter, it was being asked to coax 32-inch wheels—beefier ones, with much heavier tires attached—into motion. The result wasn't pretty. Since the gearbox consists of a dry-clutch system, there was no oil cooler to help bring the temperature down while trying to hammer the thing over a big pile of rocks. There were several times I had to stop the vehicle, turn it off for a few minutes, and let the transmission cool down. This kicked off a bit of brainstorming between myself and Ashby, who ran point on the RPG Tucson build.

How about an external water jacket, like the ones the military uses on big machine guns?

Too, heavy and likely to get punctured, Ashby shot back.

How about welding aluminum cooling fins to the transmission case?

Ashby's idea for a solution would be a two-gallon tank with a sprayer designed to mist water (pre-warmed by the engine, to avoid cracking the gearbox housing metal) onto the transmission case, cooling through evaporation. To demonstrate the principle, he poked a hole in the top of a water bottle, then squirted it onto the casing whenever we were halted because of transmission temps. It was a simple trick, but it worked.

The 1.6-liter engine was a delightfully capable little mill, and more than adequate to carry the stock Tucson I drove the four hours down from Salt Lake city at 70 to 80 miles per hour. It also got close to 30 miles per gallon on the highway, and had enough power to quickly scoot past most slow-moving traffic.

But, out on the trail, the diminutive engine strained. One little mistake in the approach to a steep grade (and I made plenty of those) and the engine would bog down, never reaching the rpm required to spin up the turbo. The solution? Bigger cylinder bores, a stroked crankshaft and a bigger turbo, perhaps? It depends upon how much extra clearance Hyundai's engineers left on an engine that was probably designed to the limits of what strength-to-weight ratio physics would permit. (Lighter engine, better gas mileage). Those changes would be expensive, but effective.

Still, those problems were part of what was fun about the RPG Tucson. Like the Jeep Renegade, BMW X3 and other small all-wheel drive crossovers, the Tucson isn't likely ever to leave paved roads, even if it's wearing big, meaty tires. Most offroad enthusiasts will opt for something with established crawling chops – a Jeep Wrangler, Toyota 4Runner or Range Rover, for instance. The RPG Tucson is merely an exploration of what's possible.