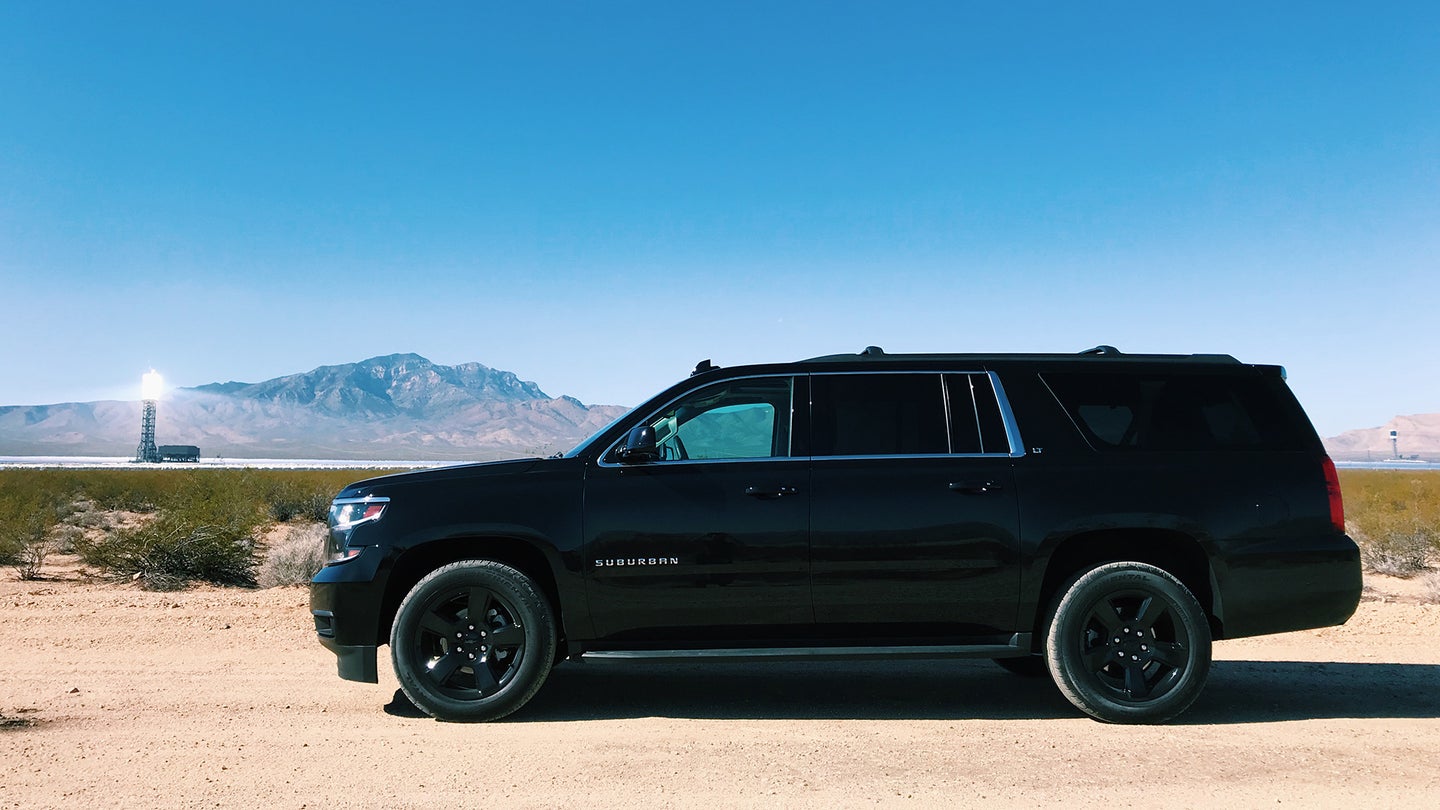 Welcome to Critic's Notebook, a quick and off-the-cuff car review consisting of impressions, jottings, and marginalia regarding whatever The Drive writers happen to be driving. Today's edition: the 2017 Chevrolet Suburban LT.

The year was 1999. Gas was a whopping ninety-two cents a gallon, the first Dot Com bubble was nearing its peak, and the cultural cartographers at The Simpsons finally dove into America's decade-long love affair with outlandish sport utility vehicles. In the episode, Homer cashes in his 401K to buy a massive Canyonero SUV—"10 yards long, two lanes wide, 65 tons of American pride"—only to foist it off on Marge when he realizes the model he bought is marketed towards soccer moms. Marge thinks giant trucks are completely ridiculous and excessive, but a day in the driver's seat transforms her into more than a believer: She falls in love with the feeling of power, of size, of capability, of presence. Oh, and she also becomes a road-raging aggro monster.

Sound familiar? Like Marge, Americans originally greeted the SUV with general apprehension, but our rapid acceptance of them over the last few decades has changed both us, as consumers, and the automotive market at large. We all know the story by now: Americans aren't buying sedans anymore, because gas is cheap, people like sitting up high, and no one wants to be the only short car on a highway full of crossovers. But almost three decades into this torrid love affair with sport-utes, we're not buying Canyoneros in massive numbers, either. Instead, the SUVs of today are designed with gas mileage, creature comforts, and driveability in mind, instead of toughness and off-road capability.

Well, except for a few, like today's subject. Starting out in 1935, the Chevrolet Suburban is actually the longest-running automotive nameplate still in production. And when you strip away the leather interior and the updated sheet metal and the suite of modern safety features, surprisingly little has changed over those 80-odd years. It still uses steel body-on-frame construction. It's still designed to haul a crapload of people and stuff, ideally at the same time. It's still one of the largest passenger vehicles you can buy in America. At its heart, at its very core, it's still a truck.

The one thing that has changed? The price. The barebones, rear-wheel-drive Suburban starts at just over $51,000 (including delivery). The top-of-the-line Premier edition, with its heated and cooled leather seats and Magnetic Ride Control, clocks in at almost $70,000 if you throw in four-wheel-drive. Do the old-school underpinnings really warrant that kind of money? The Drive borrowed a new Chevrolet Suburban LT from GM for a few days to find out, taking it on the most fitting adventure we could think of—a high-speed haul from L.A. to Las Vegas and back.

Here in 2017, with our headlong rush into electric and self-driving cars, the Chevrolet Suburban is something akin to an extant species of megafauna thought to have died out long ago. The truck's enduring popularity is a good reminder that a country of 300 million people isn't going to move lockstep into the future, and that there are Americans with vastly different needs out there—some that do require a massive SUV like this.

It's a more than a cliche to say that they don't make 'em like they used to in this case—it's wrong. At the same time, it's part of a dying breed for a reason. It's hard to conjure up an argument for buying a Suburban that doesn't involve the phrases "towing" or "toughness," and our current crop of more-polite crossovers continues to siphon off buyers who would have flocked to the big truck like Marge to the Canyonero 18 years ago.

Drivers, especially automotive journalists, are always demanding that vehicles like this make excuses for their size. You get a funny look when you tell people you're driving a 'Burban by yourself from L.A. to Vegas sans cargo, and rightly so; it's an odd choice. But to focus on how big it is or how wasteful it seems is to criticize water for being wet, and to miss the point of the Chevrolet Suburban entirely. It's built to haul, to tow, to carry, to road trip—just as it's always been. The rest of the SUV market has filled in beneath it, so why change what works for the customers who demand it?

The main problem, really, is the price. For a lot of repeat buyers, there is no other option besides the Suburban, so it makes sense they'd put up with such rampant inflation. For the rest of us, though, it's a bit of a stretch when you can get 80 percent of the capability (and 150 percent of the features) in just about any other SUV at that price point. Then again, no other truck lets you play-act at being an FBI agent quite like a Suburban.

(Don't do actually do that, though. It's highly illegal.)

The 2017 Chevrolet Suburban LT, By the Numbers

Number of times someone mistook me for their Uber driver: One