It’s a track toy. It autocrosses. It rallycrosses. It even fords rivers. My daily driver, everybody! 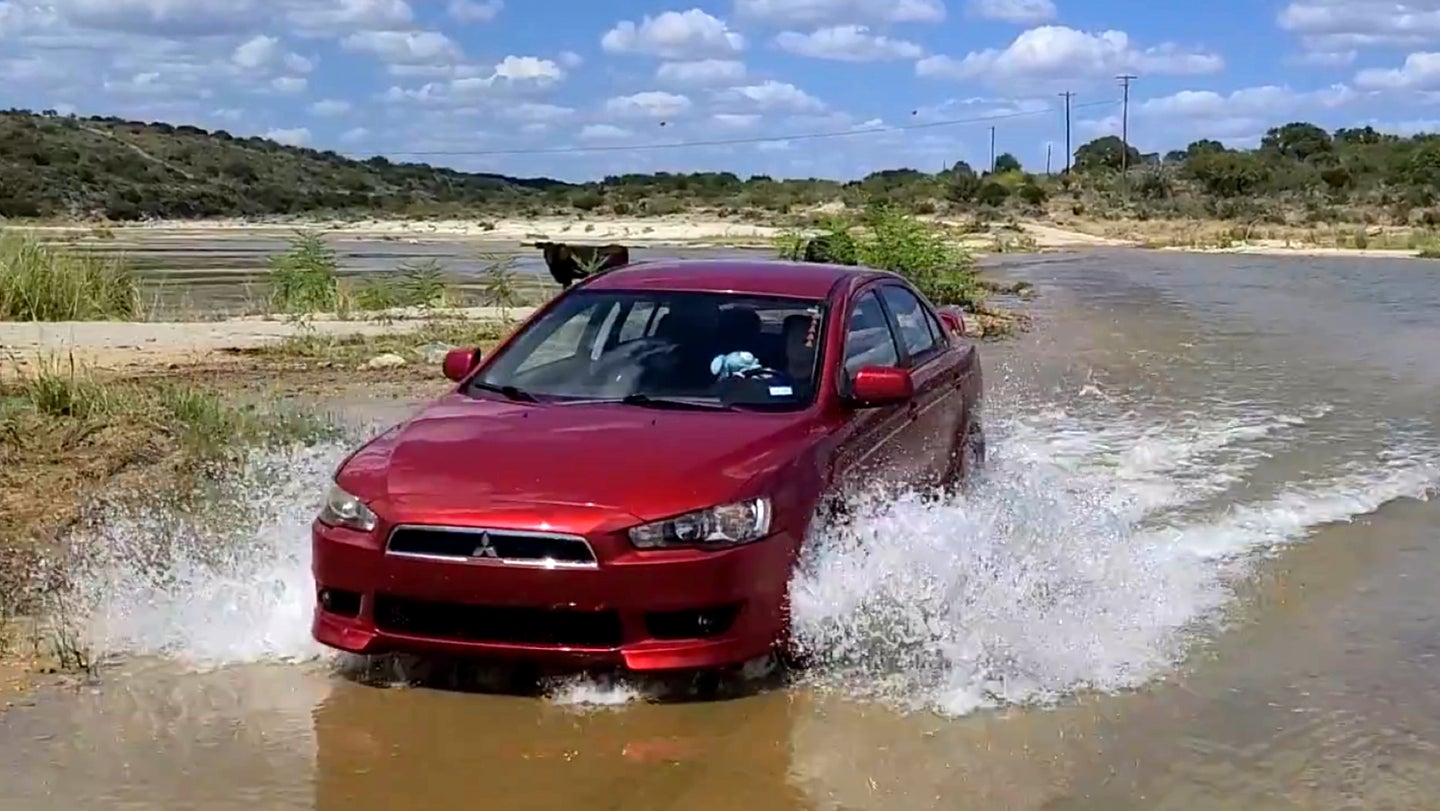 If I had one piece of advice for car enthusiasts, it would be "try everything."

Track days will teach you to look ahead and be safer on your boring commute. Road trips take you to places you've only ever dreamed about, often on new roads you've only read about on the internet. Off-roading teaches you to be more careful with where your tires are, lest you do something extra dumb.

You could have a separate vehicle for everything you want to do, and for activities as different as autocross and rock crawling, that probably needs to happen. Yet there's something to be said for one vehicle that can do a large chunk of it, and for me, that's my daily driver: a 2010 Mitsubishi Lancer GTS.

When I got my car as a graduation gift, it looked a little high off the ground. I didn't want to slam it hellaflush-style, but I did entertain the idea of installing some nicer suspension parts that would naturally have a modest but functional drop. I was doing a lot of autocross at the time, and why not?

But I didn't. I've barely touched the car except for more aggressive brake pads that can handle the heat of track use and some nice, grippy summer tires. Those are just consumables, though.

The rest of the car is as stock as it rolled off the dealership lot, although a couple plastic underbody panels were left as sacrifices to the rallycross track. My usual rallycross beater broke one day, so I finished my runs with the Lancer. I had a blast and discovered that Dunlop ZIIIs are not good dirt tires. Who cares, though? It was fun.

The Lancer's status as a reliable standby has become its best feature. As soon as it was out of its break-in period, it went on a race track. I bought a Porsche 944 race car because I wanted to go crapcan racing with it and thought I should go a little easier on my daily driver. Yet when the 944 is broken, the Lancer is usually still there, waiting to drive in funny-shaped circles at a track day. It's the reliable friend.

Leaving it on stock suspension was a good call, too. Anyone who's ever heard drivers complain about bumps at Circuit of the Americas knows that Central Texas' shifting dirt isn't kind to paved race tracks.

Last weekend, I discovered another fun use for the Lancer: farting around on one of central Texas' few overland routes. There aren't many options for that sort of thing here—there's little public land, a lot of private ranches and a lot of well-armed ranchers. Yet there is a nice dirt road that passes through a few low-water crossings and over some rockier spots. There aren't any big steps in the way like you'd find at an off-road park, but there are some bumps you might want to watch out for.

Various pickups, Jeeps and SUVs passed the little Lancer on its way into the middle of nowhere. I knew where to expect the river crossing, so I stopped to zip-tie up some of the flapping underbody plastic from its prior shenanigans. A G-wagen paused to ask if everything was fine. Yep.

I don't think I've laughed as hard in a long time as when I got to the low-water crossing for the James River. It was only a few inches deep, but that was enough to put a big dumb grin on my face. You could, in theory, easily ford the river in a covered wagon here without losing half of your food supplies and dying of dysentery.

scavenger hunt, so I had to go back and make a second run across with my mascot visible in a video for the points. There was cow traffic on the first try, after all. (This was my excuse to ford the river again.)

Had my car been any lower, I probably would have scraped some things on the rockier parts of the road and had less fun. But it wasn't. Stock parts aren't as expensive if I break anything, and I can worry less about having as much fun as I can.

Sure, I could sink more money into some nicer parts that might make it less tippy on track, or better for rallycross, but that seems far too specific. I have the Porsche for track use, but it's broken right now. I'm just going to keep messing with the Lancer as-is. I'm in no hurry to upgrade parts on it, or trade it for a different car. The Lancer is good already. I'm too busy having fun with it.

Whatever you have in the garage doesn't really matter. Just go enjoy it.