Admittedly, the name is confusing: Ford Bronco Sport. This is not the “big Bronco,” the one that provides all the heritage and cred that already has off-roaders drooling over a vehicle that faces off head-to-head with the toughest Jeeps. That vehicle is now delayed until next summer. This is the “baby Bronco,” the smaller, more affordable crossover with the same styling cues, but more suburban appeal.

Still, for the next several months, the 2021 Ford Bronco Sport is the only SUV with the famous horse-kicking-up-its-rear-legs logo. (Okay, the Mustang Mach-E has a horse, too, but it looks different.)

Ford’s new small ute is very good. Despite the butch Bronco name, this one is a compact utility vehicle that competes with the Jeep Compass and Cherokee, as well as high-volume class stalwarts that include the Toyota RAV4, Honda CR-V, and Nissan Rogue.

Above all else, it’s the closest straight-across alternative I've yet found to the legendary Subaru Forester. That unlikely vehicle lured suburban and rural buyers who value its legendary durability and practicality to join the outdoorsy drivers who actually use all-wheel drive and really do get their vehicles muddy.

Ford would love to attract that mix of shoppers. So it built a similarly boxy vehicle, added the allure of the tough, all-American Bronco name—underscored by an instantly identifiable grille and cabin features like tie-downs and rubber-mat floors—and now it has a brand-new, butcher, cooler small ute that we liked a lot.

A Classic SUV, For The Modern Era

Ford’s designers nailed the essence of what a small SUV should look like: a tall, boxy vehicle with an almost-vertical tailgate, window lines that run parallel to the ground, and relatively slabby sides. It’s instantly recognizable for what it is. Half a century ago, we’d just have called it a wagon. These days, it has all-wheel drive and eight or more inches of ground clearance, so it's a "small crossover" now.

The upright shape contrasts with the latest Ford Escape, which morphed into a tall five-door hatchback. The two share mechanical underpinnings (though the little Bronco has been tweaked for tougher off-roading). But this one looks like a truck, while that one looks more like a car.

It’s a smart way to sell more crossovers, especially since Ford axed the Focus for North America. Old Focus buyers can have the Escape, and Escape buyers who yearn for the upright profile of the early generations from 2002 through 2012 now have the Bronco Sport—even to the flip-up rear window in the tailgate.

The closest design comparison is the Forester, which remains the most upright of all the compact crossovers. Foresters haven’t varied in styling that much in five generations since 1997, and they’re remarkably capable off-road when called upon. They won’t do what a Jeep Wrangler does, but they’re way more adept on rocky, rutted tracks and muddy muck than your basic RAV4. I'll have to leave it to true off-roaders to weigh in on exactly how good the Bronco Sport is under those conditions. (So far, first indications are promising.)

A Square Box That Handles Well

The Bronco Sport comes in Base, Big Bend, Outer Banks, Badlands and First Edition trims, in that order—the last one is now sold out. The standard engine in Base, Big Bend, and Outer Banks versions is a 1.5-liter turbo three-cylinder (yes, three), rated at 181 horsepower and paired to an eight-speed automatic transmission. I didn’t test that version, but if the Escape with the same setup is any indication, it’ll offer good fun when driven hard, but won’t be the fastest crossover you’ve driven.

The more powerful 245-hp 2.0-liter turbo four comes in the First Edition and Badlands versions, with the same eight-speed automatic. I tested that one, and it’s definitely peppy. I spun wheels accelerating out of corners, in fact, which isn’t all that common in compact crossovers. Once in a while, during quick on-and-off acceleration in close traffic, the transmission shifts didn’t keep up with what I asked for until the software decided how it wanted to react. Not a big deal, but mildly irritating.

My test vehicle was a Ford Bronco Sport Badlands 4x4 in Kodiak Brown, a root-beer brown with a subtle, elegant metal flake that showed up only in sunlight. The two-tone interior was “Ebony Roast Lea-Trim” and mixed handsome with practical. The list of standard features added a few dozen bullet points.

All Bronco Sports come with all four driven wheels as standard. The smaller engine uses a conventional all-wheel-drive system that splits power between front and rear, though it’s driven largely by the front wheels under on-road circumstances. In addition to three relatively standard drive modes—Normal, Eco, and Sport—this AWD system offers Slippery and Sand modes.

The 2.0-liter test car had a more capable standard 4WD system that includes a twin-clutch rear differential, to direct all rear torque to one wheel or the other for greater control in off-road use. It also has a beefed-up suspension and more ground clearance. That system adds two additional modes: Mud/Ruts, for slippery wet fields and tracks, and Rock Crawl, for true off-roading.

Drive modes are selected on a rotary dial that says “G.O.A.T.” on its face. That stands, according to Ford, for “Goes Over Any Type of Terrain”—so much tougher than “Drive Mode,” right? Aside from my rutted single-lane road, I didn’t get the opportunity to take the Bronco Sport off-road—but despite its abilities, we’re betting most buyers won’t either. They just like the possibility, even if they never use it. Still, look for a more in-depth off-road test on The Drive next month.

Like most Ford cars and its sibling the Escape, the Bronco Sport handles and holds the road well. It’s slightly more rewarding to drive fast than the RAV4, CR-V, or Rogue, which have softer rides tuned for mass-market comfort. I know that sounds like I'm damning it with faint praise, but let's be real. There's only so much on-road dynamism that can be dialed into a compact crossover with off-road pretensions. Still, the baby Bronco rides well, perhaps because my Badlands had optional 17-inch tires rather than the larger—arguably harsher—black 18-inch wheels that come standard on the Badlands and Outer Banks trims.

Ford has created a straightforward dash and control layout without swoops or flourishes. For this 5’11” reviewer, the seat height is exactly right: easier to enter and exit, and offering a good upright driving position.

The seats are comfortable, though the front seat bottoms felt a little small. Not a deal-breaker, but unless I’ve gained more pandemic weight than I knew, I’d have liked an inch more length and width. They were comfortable after multiple hours, though, so I won’t complain. Rear seats will hold two adults, though you wouldn’t want to try three.

The top of the upright windshield is far enough forward that if you like a high seat position, as most crossover buyers do, you may have to crane your head to see a stoplight if you’re first at the intersection. It’s not as bad as a Mini Cooper, but that was the car that sprang to mind the first time it happened. Similarly, for the first time in hundreds of cars I've tested, I found the sun visor too tall—it blocked too much forward vision. If you’re comfortable with sitting deeper inside the car, with the windows at your shoulder line, that won’t apply.

The dashboard is logical and intuitive, with controls pretty much where you’d expect them. Rotary knobs for things like audio volume, tuning, and cabin temperature eliminate any need to hunt and jab at the central screen—which isn’t that large, we should note, at just 8.0 inches. It’s crisp, though, and Ford’s latest Sync 4 system does what it needs to. But this modern vehicle has suitably old-fashioned controls that remain usable even on bumpy, rutted, teeth-jarring trails.

Clearly, Ford has put thought into how drivers actually use their cars. I like the rotary shifter, which takes up less space than the usual lever, but I was most impressed that the electric parking brake sat right behind it on the console. That encourages drivers to use Park and the brake together—versus other makers who hide an e-brake button on the lower dash by a driver’s left knee or, worse, stick with a 1960s-style pendant brake pedal.

One practical, intelligent cabin fitting I appreciated: The carpeted floor mats of my top-of-the-line Badlands edition sat on top of a wall-to-wall rubber mat that made it easy to clean out the dirt, gravel, and dead leaves that Mother Nature transfers from boots to carpets. Lots of tie-downs too.

Because the car is square and has full-height rear windows, outward vision is good except for the rear corners. This comes into play when moving out of parking spaces or changing lanes. The blind-spot warnings and a good backup camera help, but that triangular design flourish behind the rear door is a big blank spot when you look over your shoulder.

The price to pay for a taller, boxier small ute is wind resistance, which drags down fuel economy. Gas is cheap these days, so I'm not convinced that matters a lot at the moment to many buyers, but the Bronco Sport gets consistently lower EPA ratings than the Escape does.

But the Escape offers even more powertrain options. Will we see a future Bronco Sport with Ford’s latest two-motor hybrid system, including its all-mechanical AWD? Better, what about a Bronco Sport plug-in hybrid with 30 miles or more of electric range, using the Lincoln Corsair Grand Touring’s e-AWD system with an electric motor to drive the rear wheels? We’re not holding our breath, but we can dream.

Value, At A Price

That’s toward the high end of the $26K-to-$38K range for compact crossovers these days. In due course, discounts will likely appear to move these off dealer lots. I'm just wondering what the hell Ford is thinking with a delivery fee $500 higher than most competitors. Is bringing the car in from an assembly plant in Mexico really that expensive? Or is it just to lower the base price $500?

Early Verdict: Up Your Game, Subaru and Jeep

I liked the Bronco Sport a lot, in part because my family still runs a 2009 Ford Escape that’s provided stalwart service—and this reminded me of that car far more than I expected. The old Escape was designed two decades ago, and the new Bronco Sport simply updates the same formula with modern equipment, safety features, infotainment, and all the rest.

Rather to my surprise, I’d strongly consider buying one if they offer a plug-in hybrid. That’s just me, of course, and I’m betting that tens of thousands of couples or young families will go for a Bronco Sport to add a little design spice and American brashness to their suburban routines.

But I’ve decided to dispense with the whole Bronco/Sport thing. It’s too confusing for anyone who’s seen images of the “real” Bronco doing full-tilt off-roading.

I'm just going to call it the Ford Forester. And that’s a compliment.

John Voelcker edited Green Car Reports for nine years, publishing more than 12,000 articles on hybrids, electric cars, and other low- and zero-emission vehicles and the energy ecosystem around them. His work has appeared in print, online, and radio outlets that include Wired, Popular Science, Tech Review, IEEE Spectrum, and NPR's "All Things Considered." 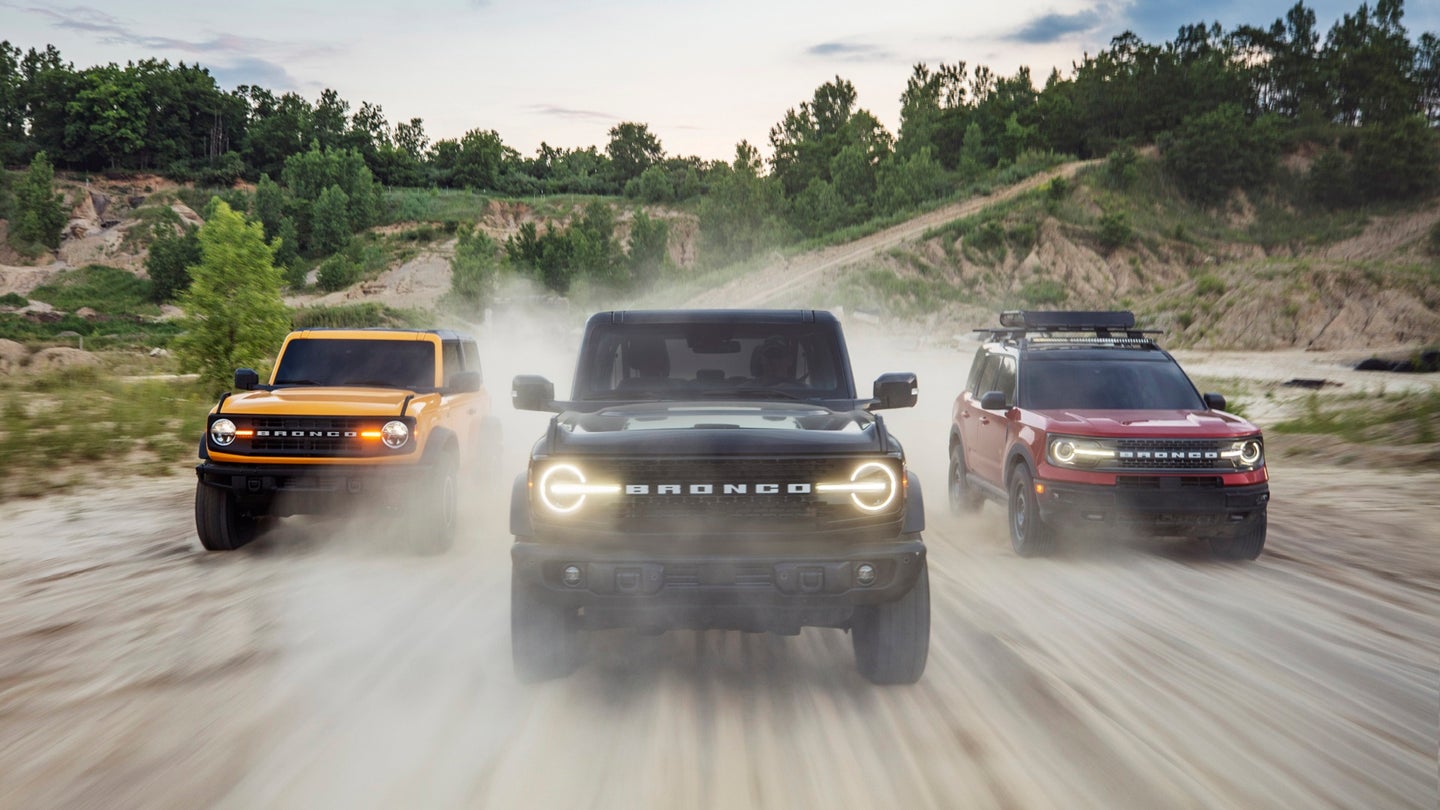 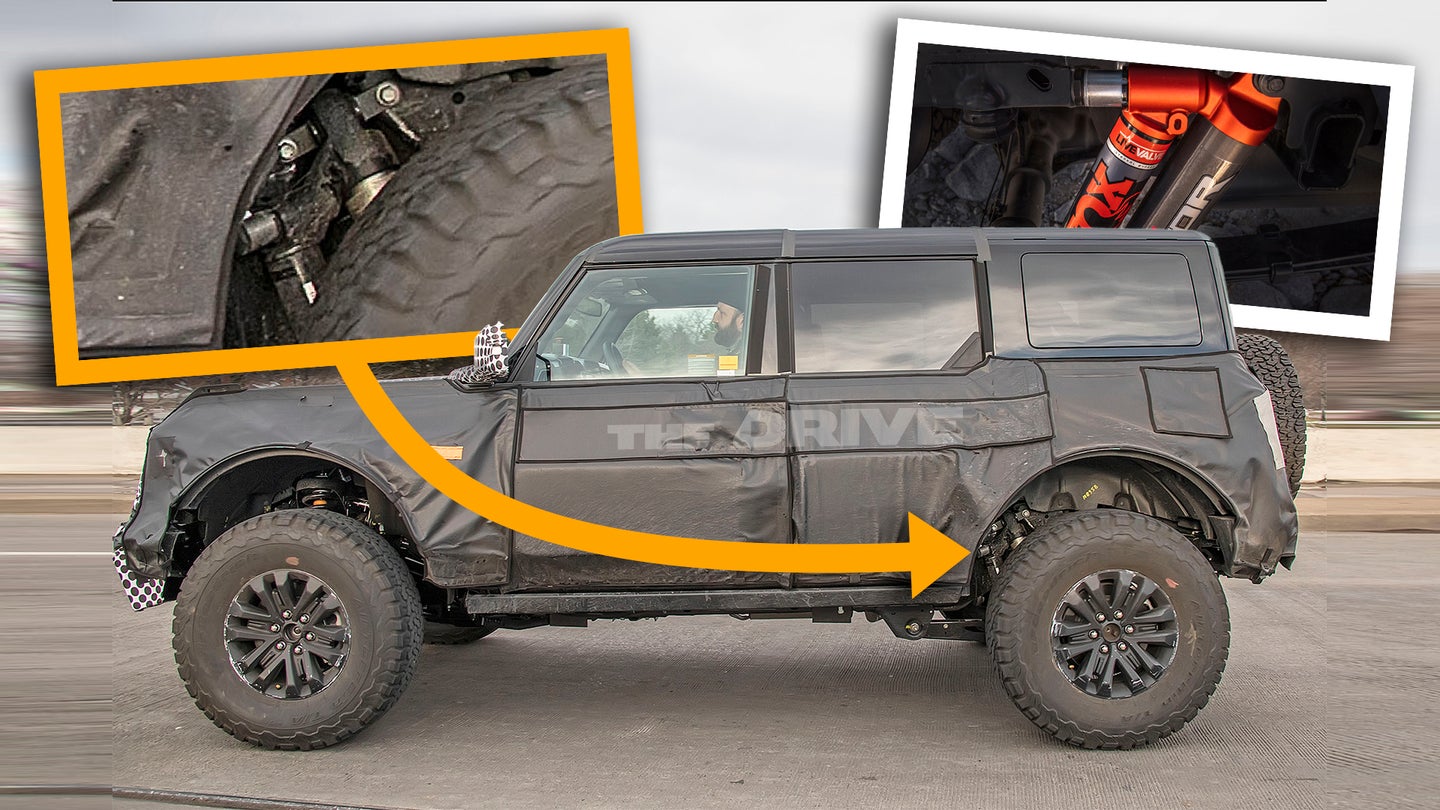 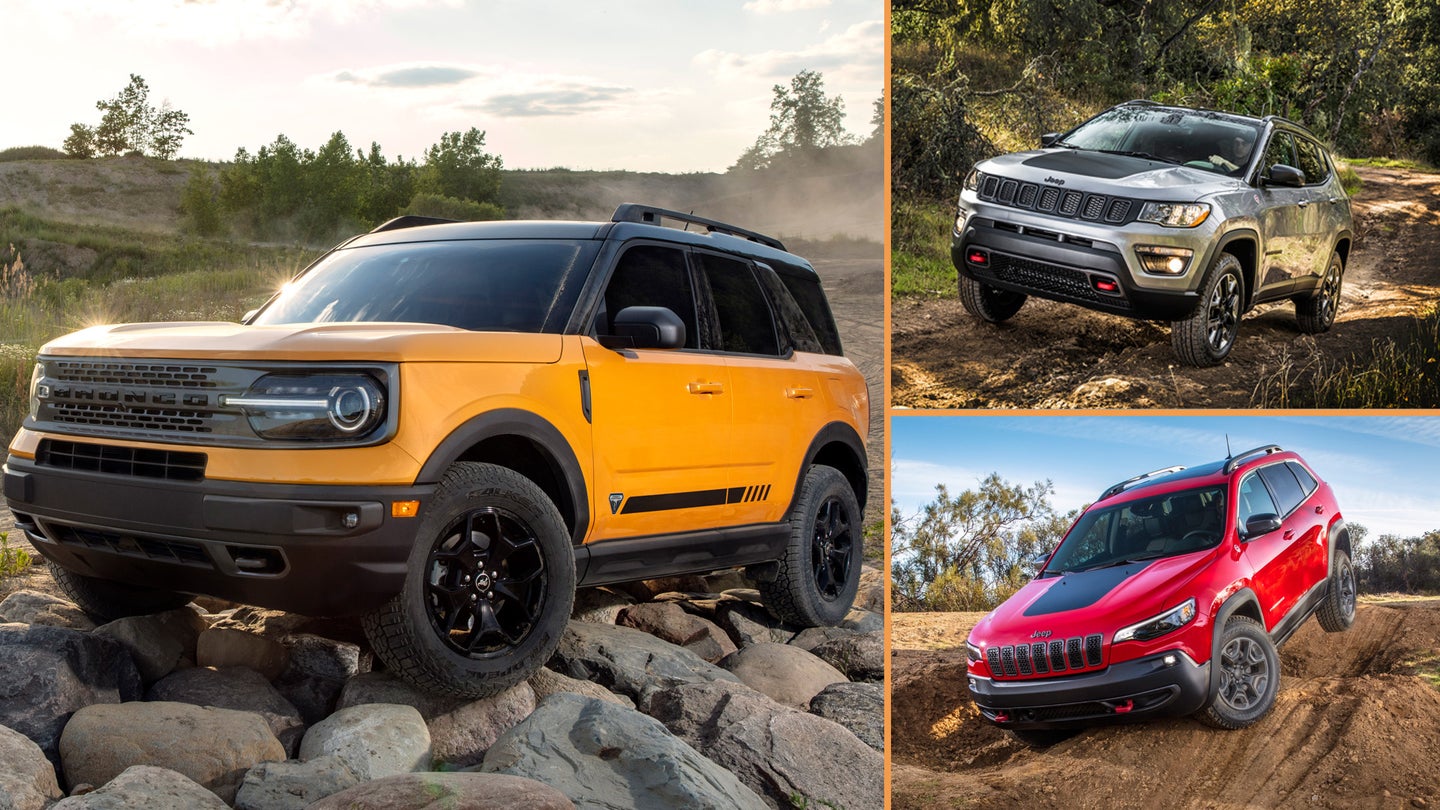