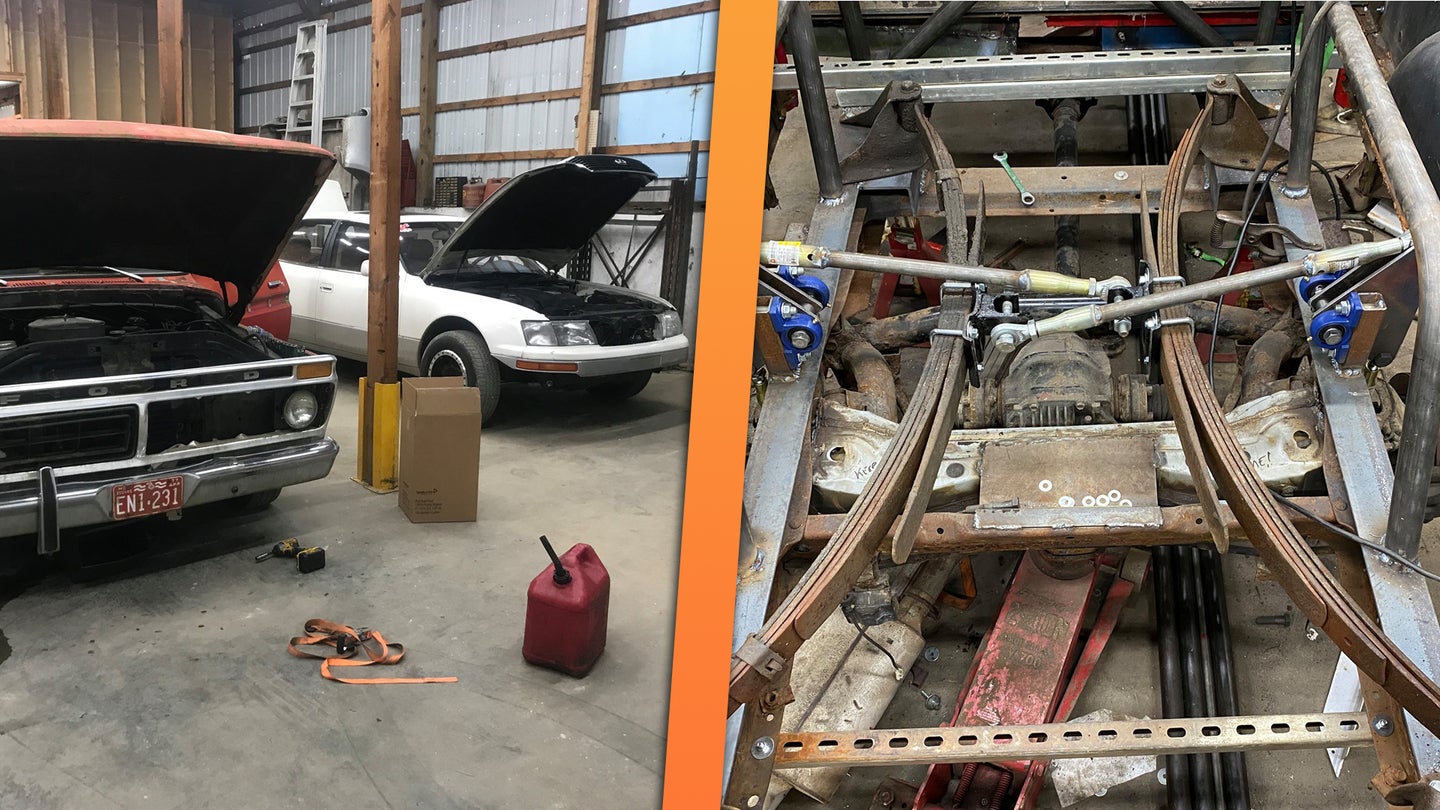 We have gotten ahold of the man behind the "cantileafer" suspension on this week's most interesting project, a custom Lexus LS400-Ford F100 mashup also known as the F-1UZ. But despite his machine's complexity, the story one Tim Heerboth has to tell about his project is pretty straightforward. You wouldn't think there's ever a good reason to combine a Japanese luxury sedan and an American pickup, but, alas, sometimes there is.

"Basically, I picked up the '77 F100 for cheap. Got it running. Figured out the transmission only had reverse and the block was so full of lime and corrosion [that] it wasn’t salvageable," Heerboth told The Drive. "Then, [I] had a friend of a friend who had a Lexus LS400 with a title that had been triple signed, so [he] wasn’t able to get it legit. I picked it up for $600."

From there, the plot thickens a bit. Heerboth originally planned on just swapping the LS400's engine and transmission into the F100, but things slowly began to snowball. Heerboth figured that just ripping the drivetrain out of the Lexus would be a waste of an otherwise good LS400, and even if the swap went well, the F100 would still ride and handle like a truck.

"I figured out that if I cut the front off the [LS400] and trimmed the box 'frame' section, I could cut the F100 front suspension and cross-member out and drop the truck frame rails inside the unibody frame," he said. Doing that would allow him to retain the entire Lexus subframe including the brakes and front suspension. So, he did.

"Once we had the front suspension in place we dropped the motor and trans back on it and figured out the transmission mount was in the same place as the original c4. It literally lined up like it was meant to. The truck [also] had a one piece driveshaft and the car has a two-piece. When I connected to the trans, the carrier bearing sat perfectly under the rear cab cross member, so it would be easy to mount."

But after these incredible coincidences, the going got a little tougher. It soon became clear that the truck's Dana 44 axle was not going to work well with the new Lexus parts—the LS400's driveshaft was 3" too short—so the entire bed was cut down to accommodate the Lexus' entire rear subframe, including the rear differential and stub axles. After all, it costs money to lengthen a driveshaft, but nothing to shorten a bed.

From there, Heerboth figured that the whole front end of the truck might as well get swapped out as well. The floor of the F100 was rusted out, and it would be a pain to get its gauges to work with the new Lexus drivetrain, so why not just swap out all of it?

"The power leather Lexus seats were in really good shape... and the brake master cylinder was already set up for four wheel disk instead of disk/drum, [so] I cut the whole floor and firewall out of the truck and replaced them with the ones from the car."

With that all figured out, Heerboth now had to figure out a suspension setup for the back of the car. This not only involved finding the appropriate parts, but also making a rigid cage to mount everything.

However, the primary influence for this build coming together was cost. He paid $1,100 for the truck, $600 for the Lexus, and so far $800 dollars on parts and consumables. He tells me he sold the Ford's engine, transmission and wheels to make around $500 back, so clearly, he wasn't going to go out and drop a huge amount of money on suspension for what he calls his "Rat Luxe" pickup.

And that's why Heerboth tells us the reasoning for that rear suspension was rather simple—it was all about what he had laying around, ease of assembly, and of course, the cost. "[In order to use the existing Lexus parts] I would have had to cut out the inner wheel well and build a shock tower almost as high as the bedrail. The stock Lexus coilovers [are] 26 inches long and mounted to the parcel shelf [in the LS400], and then trying to find a shorter coilover to fit under the bed and know what spring rate and damping was getting expensive fast."

So Heerboth and his associate on the project John Stetcher came up with the alternative solution. Instead of hunting around online for the perfect—and most likely expensive—coilover, why not just use the existing Ford leaf springs in concert with some custom pushrods and "farm store" parts?

The result of this creativity is the "cantileafer," however, this isn't the design's final form. Heavy-duty, high-quality hardware is on the way to ensure that the system holds up under load. Heerboth is certainly smart enough to hesitate before trusting his rear end with stuff from the hardware store.

So what started as an engine swap ballooned into a full-on mashup of two unlikely cars that work surprisingly well together. It's always interesting when stuff like this happens, but it always takes a long time. This particular project has been going on for 16 months, and the wheels were just recently put on the vehicle. So let's not rush Heerboth, he's doing a unique project that's refreshing compared to the constant LS-swaps and high-dollar builds. It's not every day we get to enjoy watching something like the F-1UZ take shape.

Its creator calls it a “cantileafer” rear suspension.