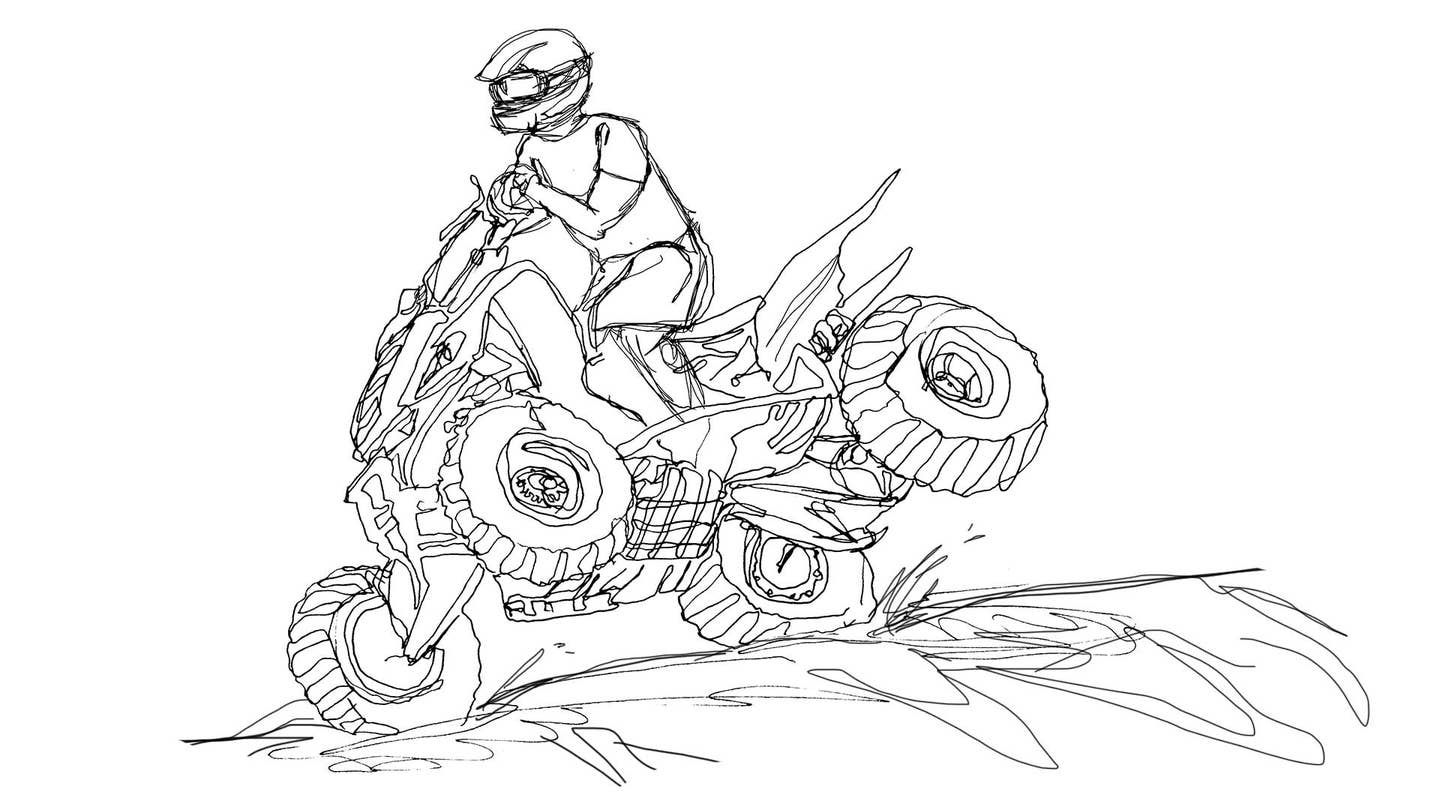 The Crash: I had a freshly minted motorcycle license when I jetted off on a press trip across South Africa. Accordingly, I was looking forward to quad biking to the Augrabie Falls in the Kalahari Desert. There was a nominal instructional period, best summed up by our guide’s parting advice: “Ah, mate. Just have fun!” Then we plunged into a lead-follow session, out into the barren dunes.

Overconfident, the convoy was advancing at too moderate a pace for my liking. Thirty minutes into the middle of nowhere, we stopped for some freeriding. Finally, a chance to see the Honda hoon. I asked the guide if we needed helmets. “Up to you, bru.” I tugged a lid on anyway and cranked the throttle wide. A few successful donuts later, I pointed the nose up a moderate dune. Fast. Too fast, so I foolishly braked at the crest.

The front end dropped over the other side, sinking into the sand, vaulting me airborne over the handlebars. I landed face down, jerking my head around just in time to see the Honda careening towards me. It landed with a sickening pop. Everything went white.

The Damage: The human body is not sufficient as a landing cushion for a tumbling 600-plus-pound four-wheeler. When I came to, the idling machine had my legs pinned, though they moved. A good start. Let my spine be intact. Sitting up, I breathed a sigh of relief and went to move the machine off of me.

Lifting my arms, only my right came into view. Panic descended. Vision obscured by the helmet’s face shield, I frantically groped around the left side of my body, looking for my left hand. I couldn’t find it. Worse, I couldn’t feel it. A guttural scream emerged, foreign even to me. My group was on the other side of the dune, and it took some time for them to reach me. “My arm is gone,” I kept yelling. “Find my arm!” I’ll never forget looking into the eyes of a kind, matronly woman only to see her face drain of all color. “Honey, it’s behind you,” she whispered. “You’re touching it.”

It was still attached. My humerus had shattered in two and was trying to poke through my skin.

The wounded wing lay at a grotesque angle, though the gift of shock prevented pain from registering. The group freed me from the Honda and I was on thrown onto the back of the guide’s ATV for a bumpy sprint to civilization. Adrenaline wore off as we barreled into a neighborhood.

“Where’s the hospital?” I shouted.

“There isn’t one. This is the doctor,” he hollered, screeching up to a nondescript house.

The office was, in fact, the doctor’s home. I made it to his kitchen table before the mounting pain induced a blackout. When I came to (again), the doc had removed my helmet. A sizeable chunk was missing from the back, gouged by the ATV. He said it probably saved my life. The guide had gone back to our group, stranded in the desert. Alone and scared, I asked about next steps and was told I needed the nearest hospital, an hour and a half away in Upington. He called “an ambulance.”

What arrived was a vintage cargo van with a dude in a Spongebob Squarepants t-shirt and what looked like his girlfriend. Both spoke Afrikaans, but little English. I remember them pointing and laughing at me. They fashioned a splint from a piece of cardboard from the garbage behind the doctor’s house, duct taping it to my arm and torso.

The unmarked van contained no medical equipment or supplies, only a bedraggled gurney. On the road, every bump slammed  fragmented bone against exposed nerves. I howled so often, Spongebob pulled over and instructed me to sit up. I managed.

“Look,” he pointed out the windows at the desert wasteland around us. There was not a manmade structure visible. “Keep screaming and I leave you here.”

At the hospital, confirmation of the catastrophic damage came an hour later from a single x-ray—single because this was the paid hospital, meaning you paid an estimate before any care. Wallet-less, I only had enough for a single piece of film and surgery was required. My white knight was our trip organizer, who graciously called and charged $7,000 to his personal card for the operation.

The endeavor was far from a success. Stateside, I discovered the hospital had missed six broken ribs, causing a pleural effusion. Back under the knife, a chest tube drained more than two liters of blood, allowing my lung to return to normal. Months later, my humerus, still in two distinct pieces, was declared a non-union and a revision surgery was scheduled.

More surgery. An inexplicably bent titanium plate was  removed, as well as several mismatched screws. The head of one was floating after having randomly sheared off. Turned out, the South African surgeon incorrectly aligned the bones and left a pencil-wide gap. My hip was sliced open and chiseled to provide bone dust to pack the void in hopes of fostering regrowth. No dice. Months later, this doctor casually tossed out the possibility of amputation and that was the last time we saw each other.

A year later, I underwent a second revision helmed by a renowned surgeon, who just so happened to be South African, from the region of my accident. He installed three plates, 27 screws and some cadaver bone dust, all of which did the trick.

(The kicker: My Freelancer’s Union insurance decided, post-surgery, to nullify my policy citing a paperwork loophole and stuck me with a six-figure bill. The benevolent doctor and hospital forgave 80% of the charges.)

Today, there’s a slight dull ache I’m told may never fully abate, and you can feel my savior’s craftsmanship if you grip my arm hard enough but I’m happy I have an arm you can grab.

The Moral: Don’t be a jackass on an unfamiliar vehicle in a foreign country and always wear a helmet. Also, insurance companies suck. Upshot? There are plenty of decent people willing to help a stranger navigate a seemingly endless streak of medical misfortune.