That means it has a factory two-inch lift, a skid plate, and a locking rear diff. 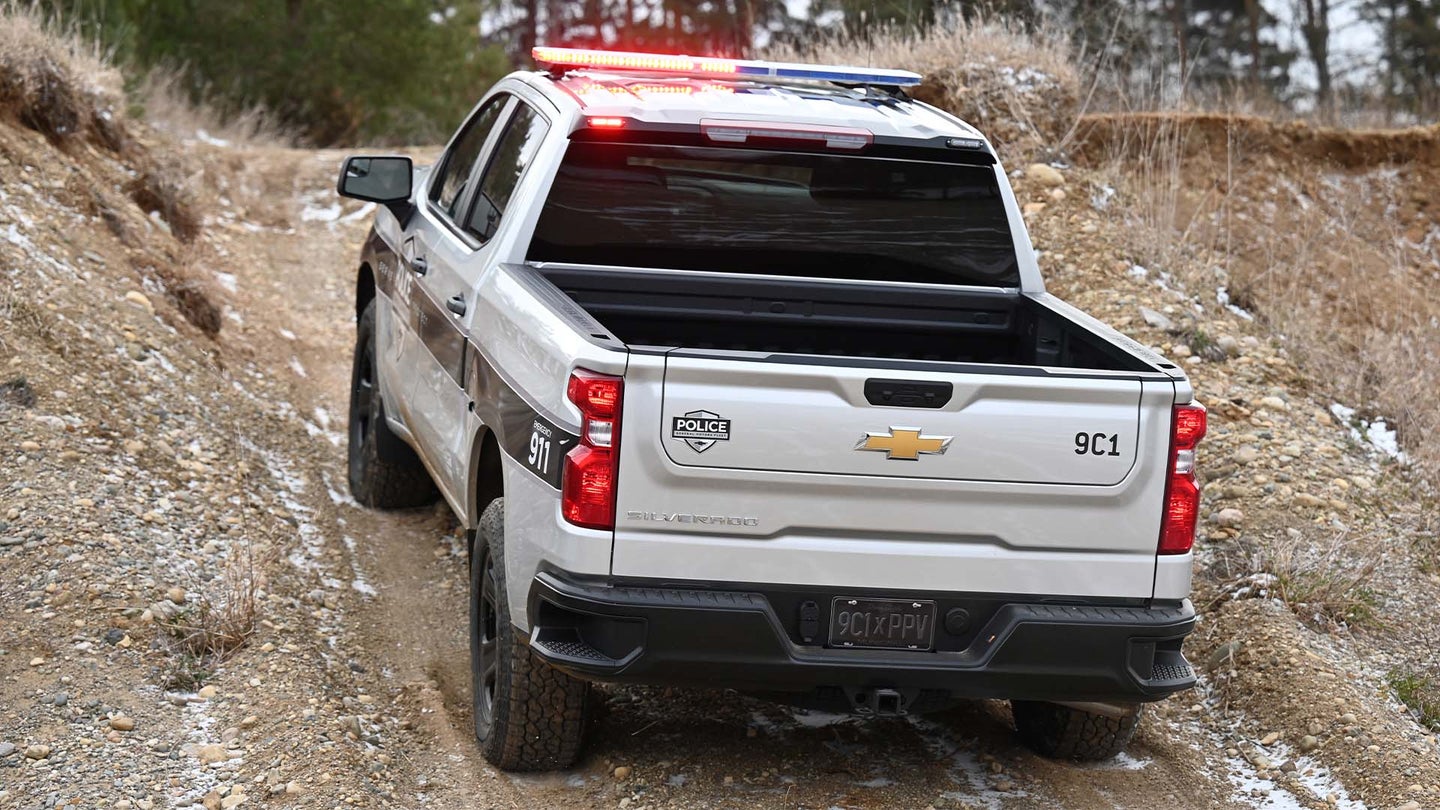 As if it's not enough trying to tell if that Ford Explorer in your mirror is a cop, now you've gotta keep an eye out for the 2023 Chevy Silverado PPV. It's a lot like the regular civilian truck, all the way down to its two-inch lift, as Chevy has leaned heavily on its production parts bin for the first-ever Silverado pursuit vehicle. Even still, it's got some upgrades that your Average Joe or Jim won't get from the factory to set it apart.

The powertrain is pretty standard fare—all Silverado PPV units get a 355-horsepower, 5.3-liter V8 that directs output to a 10-speed automatic transmission. What stops the truck, though, is really worth noting as it's got six-piston Brembo front calipers that are more Camaro than Canyonero. That's crucial when you're running at high speeds and have to turn in a hurry, which is something pursuit vehicles have to do on occasion.

When it's not chasing down other cars, the Silverado PPV can go off-road like you'd expect any good truck to. It's got the goodies from Chevy's Z71 package, which means it has Rancho shocks, a big front skid plate, and a locking rear differential for better traction on loose surfaces. Apparently, it even has best-in-class ground clearance at 11.35 inches—for reference, that's more than a stock Silverado Trail Boss.

Handily, Chevy made sure this pickup can still tow. Each one touts a max trailering capacity of 9,300 pounds, which isn't too shabby considering all the extra weight these haul around by way of accessories. The automaker specifically mentions marine and mounted operations as practical uses for the Silverado PPV's towing capabilities, which sounds about right. Then again, you never know what you'll need a truck for.

Since every department's needs are different, this cop truck can be sent to upfitters for whatever equipment necessary. It comes standard with auxiliary wiring circuits and five blank switches that can be tapped into for commonly used accessories, like floodlights. The front-middle seat can even be deleted in case that space is better served hosting something else. These are all the features you'd expect from a pursuit vehicle, but the Silverado PPV doesn't overlook the fundamentals.

As for pricing, I couldn't even begin to tell you how much they cost because Chevy isn't saying—at least, not upfront. Just know they likely aren't cheap and you probably can't get one anyway unless you're actively serving in the police force.

I also wouldn't advise driving through a tornado to get one for free. Chevy can only gift so many.

Chevrolet Silverado EV Already Has Over 110,000 Reservations On The Books

People are lining up in droves for the company’s first electric pickup truck.