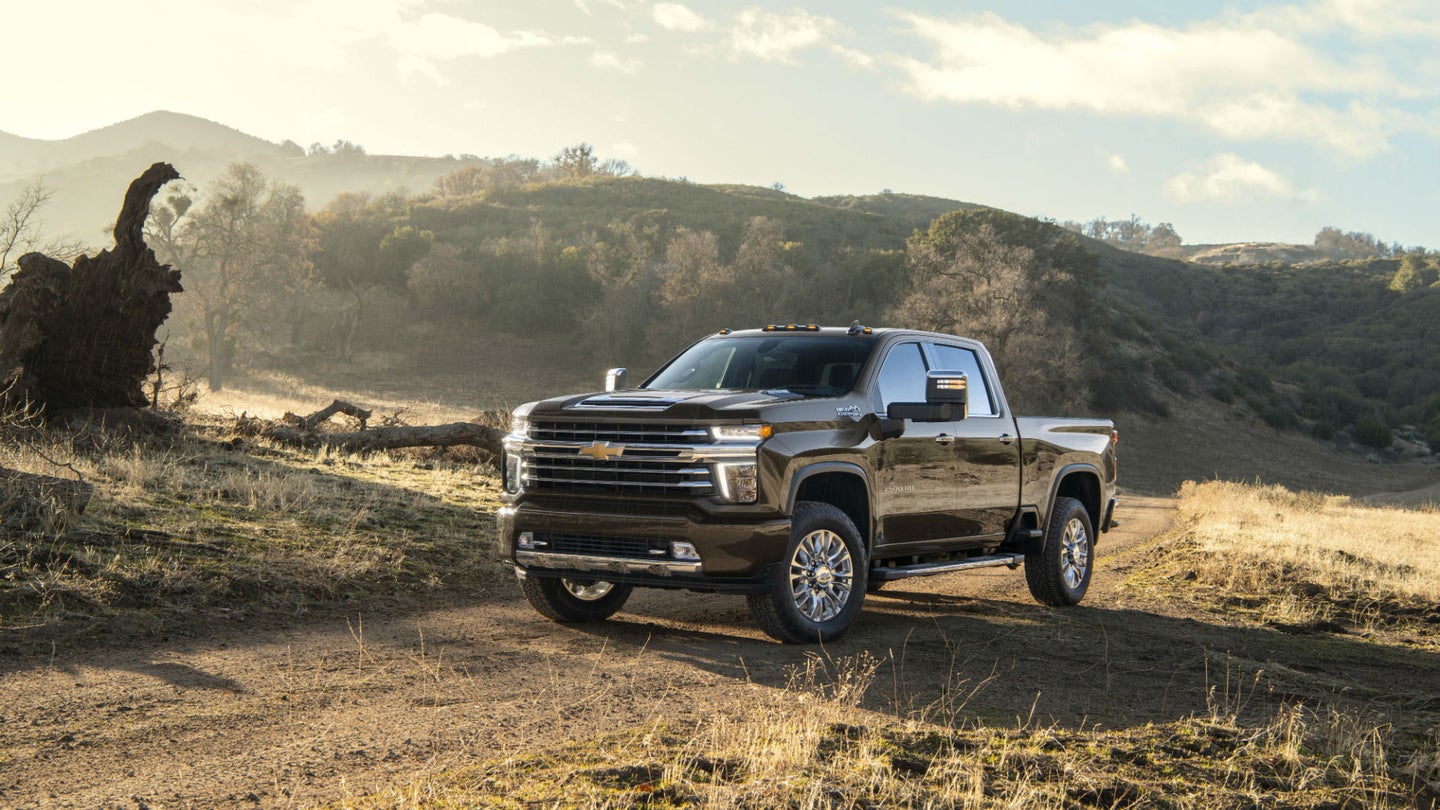 What's New: Plenty. Off the bat, the 2020 Silverado HD's design is an eye-catcher—take that how you will. While many have criticized its looks, and perhaps rightfully so, the range-topping High Country trim is the most handsome of the lot. Luxury has not been overlooked and certain differentiators like the Bowtie-toting front grille make it a more pleasant sight than the lower-trimmed trucks.

The next-gen model is taller at its peak than the outgoing Silverado HD, but its bed rails sit at the same height; because in the case of hooking up a fifth-wheel trailer, higher isn't necessarily better. Combined with the totally redesigned bodywork, Chevrolet has taken aim at a more aggressive stance that reinforces the heavy-duty attitude its customers look for when stepping up from half-ton pickups.

Technology is also at the forefront of the Silverado HD's strong suits. Chevrolet has packed in enough innovative equipment to assist in work and play, both of which are major focus points for the ever-expanding truck market. Among the various features that were developed to make life easier on drivers, the most intriguing is the Chevy's transparent trailer view which combines a host of rearward-facing camera angles to allow a "see-through" look of what's behind the truck. In essence, it enables drivers to keep an eye on their surroundings when towing anything from fifth-wheel campers to 30-foot-long box trailers.

Owners are offered innovative connectivity features, many of which can be accessed on their iPhones and Androids via the MyChevrolet app. When paired, the Silverado HD can relay loads of vital information to your smartphone including operating temperatures, HVAC controls, and trailer status insights such as fifth-wheel water tank levels and other various details.

All of these exterior doo-dads were created to complement the truck's core capabilities, which can be credited to a redesigned 6.6-liter Duramax diesel engine and 10-speed Allison automatic transmission in top-spec.

What You Need to Know: Chevrolet's Duramax powerplant ponies up 445 horsepower and 910 pound-feet of torque with the 2020 Silverado HD. While it may not win any power competitions when pitted against the likes of Ram and Ford, it does boast the highest towing capacity at 35,500 pounds. That's 400 pounds more than the newly unveiled 2019 Ram HD and 500 more than the 2019 Ford Super Duty offering, and not to mention a massive 52-percent increase over the outgoing model. Furthermore, Chevrolet boasts the truck's ability to put this performance to the ground at any time thanks to alleged smarter gear ratios and the Allison 10-speed.

An all-new, 6.6-liter gasoline V8 is offered as standard, which still generates a respectable 401 hp and 464 pound-feet of torque.

Quotable: “We set out to make the best HD trucks on the market, bar none,” said Jaclyn McQuaid, chief engineer for the Chevrolet Silverado HD. “We increased towing capabilities across the line, not just for dually buyers. We added class-leading towing technologies, such as 15 available camera views, to make trailering more convenient, whether pulling a large cargo trailer or fifth-wheel camper. And we made a host of changes to make tasks easier.”

What Else: 2020 Chevrolet Silverado HDs are built at General Motors' Flint, Michigan plant. The 159-acre, six-million square foot facility has been the benefactor of major investments from the Detroit auto giant, totaling $1.5 billion since 2011. It's also the oldest and longest continuously operating GM plant of them all, starting production way back in 1947.

Ford teases its newest truck ahead of the 2019 Chicago Auto Show—but doesn’t reveal if it’s bested Ram’s 1,000 pound-feet of torque.

Up in Your Grille: Chevrolet Shows Off 2020 Silverado HD High Country

The High Country’s grille is different from the maw of the Z71, and that’s a good thing.

2020 Ram HD: Our Best Look Yet at the Upcoming Heavy-Duty Pickup Truck