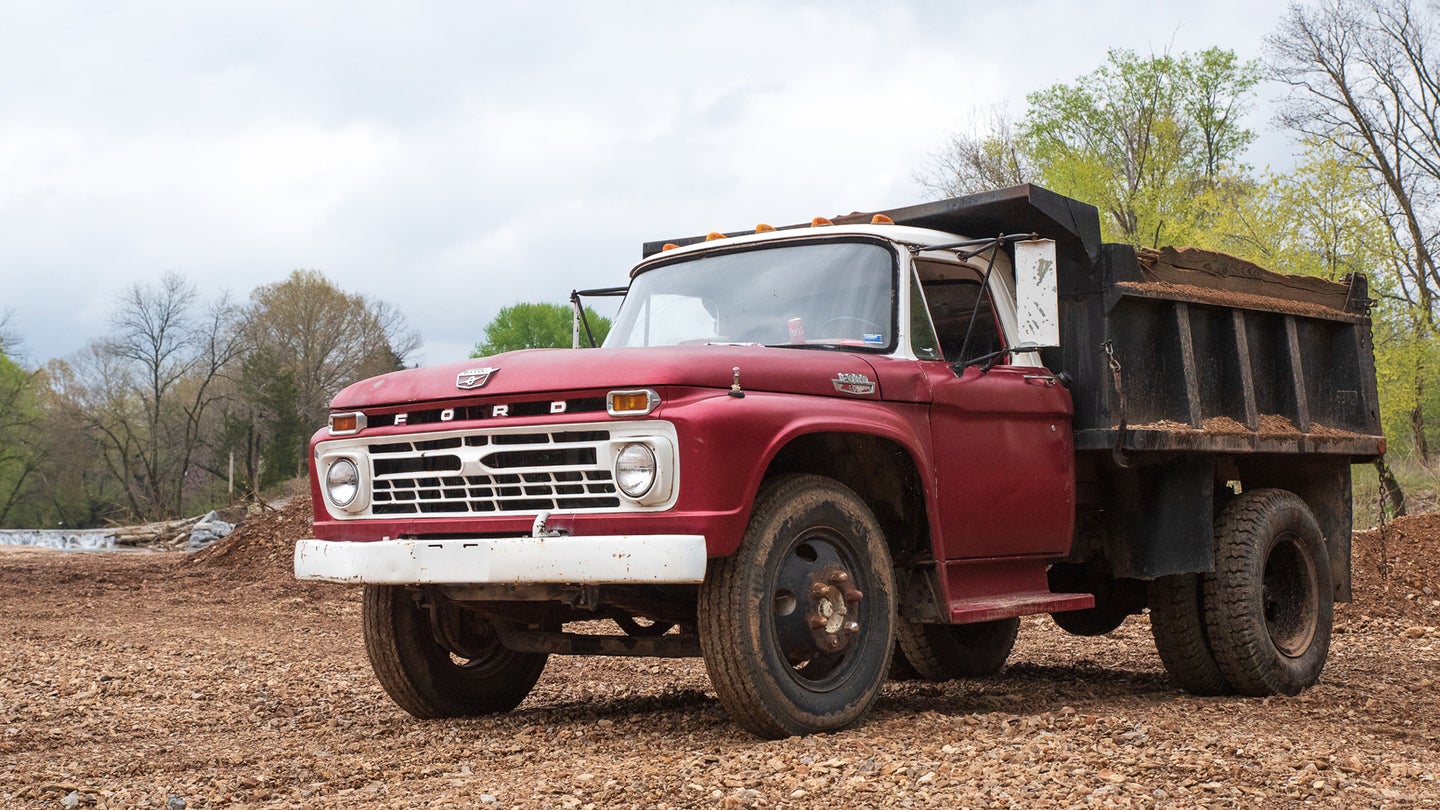 One year ago, almost to the day, I busted the bed frame on my 1966 Ford F600 dump truck. It was a lesson in fabricating and, perhaps more importantly, not overloading it in the first place. With that in mind and a steady course of constant maintenance, my 55-year-old workhorse has achieved a feat that I'm really blown away by. In the past month or so, we've used it to haul more than one million pounds of gravel. One million pounds!

I'll start by conceding that, sure, that's nothing to brag about for rigs that work every day. But, my truck does not work every day, and it's also got a measly 300 inline-six gas engine sending power to a single rear axle. There's no telling how much it's hauled in its lifetime, which started before either of my parents were born, but I'd consider that seven-figure mark especially impressive after so many years.

The math I used to get that figure is pretty simple. Each load measures roundabout five tons, or 10,000 pounds; keeping track of how many loads it hauls each day helps determine its running tally. I hadn't even planned on totaling it up but as I sat there, talking with my wife and her grandpa, we figured it had hauled a little more than 80 loads as of last Thursday. We added nearly 25 to that over the weekend, pushing us past a million pounds and prompting a small but deserved celebration for the old Blue Oval.

In case you're new to my project series, I'll offer some background on why I even bought a dump truck to start with. Our family owns a campground in Southwest Missouri, where Big Sugar and Mikes Creek meet. It's a modest place measuring roughly 30 acres but with plenty of "beachside" real estate...until floods started eating our beach away and created an island mounded with rock that we hadn't been able to reclaim. This spring, though, we were surprised to find the stream on our side of the island—now a peninsula—had dried up, meaning we could get our machinery over there and ​do some work​​​.

We readied our tractors and I hustled to get the Ford in working order. It had only made one outing since November 2020, and during that trip this February, it developed a starting problem. If you gave it a push and popped the clutch, it'd start right up; however, turning the key only led to loud hums and clicks from the firewall-mounted solenoid.

I replaced said solenoid, though that wasn't what eventually fixed the issue. Long story short, I had a bad ground that was preventing the starter from getting the juice it needed to crank. After two trips to the part store and a few partial afternoons of struggling with it, I wiggled the black cable on my battery and it fired to life. Neat.

From there, it was straight to work for the '66. It puts in roughly six or eight hours each time it idles and pops down the hill from our house to the campground, and it becomes a game of repetition. Back up to the pile, get loaded, drive to your dumpsite, and unlatch the tailgate. Clutch in, engage the power takeoff, and push the lever that prompts the bed to tilt skyward. Once you're done, simply reverse those steps and go get another load.

We've gotten pretty good at the procedure seeing as we've done it roughly 110 times this year. And that's not counting last spring when we hauled 60 loads with it immediately after buying it from a local farmer. Luckily, we were able to kill two birds with one stone by moving all that gravel from place to place. 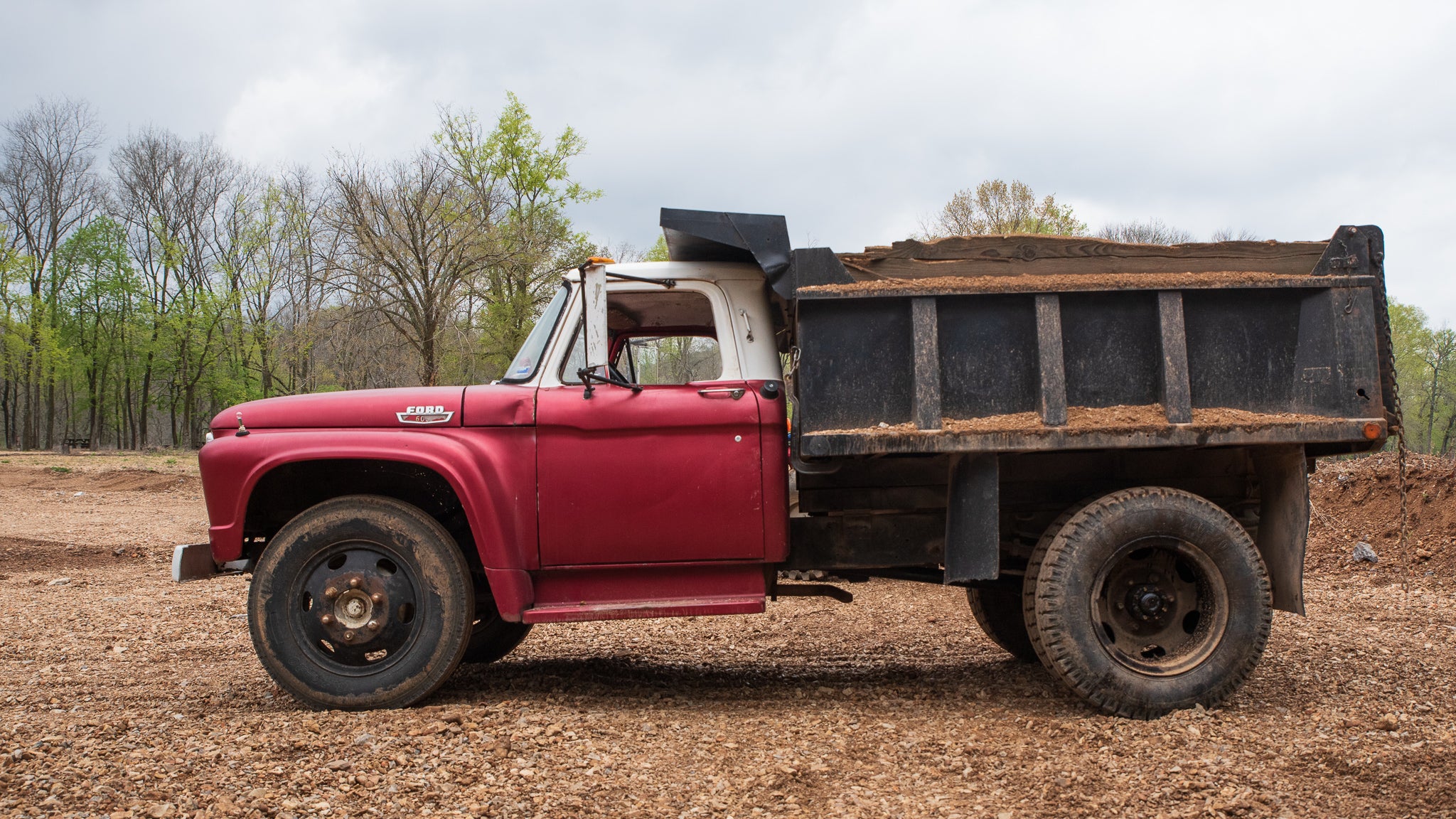 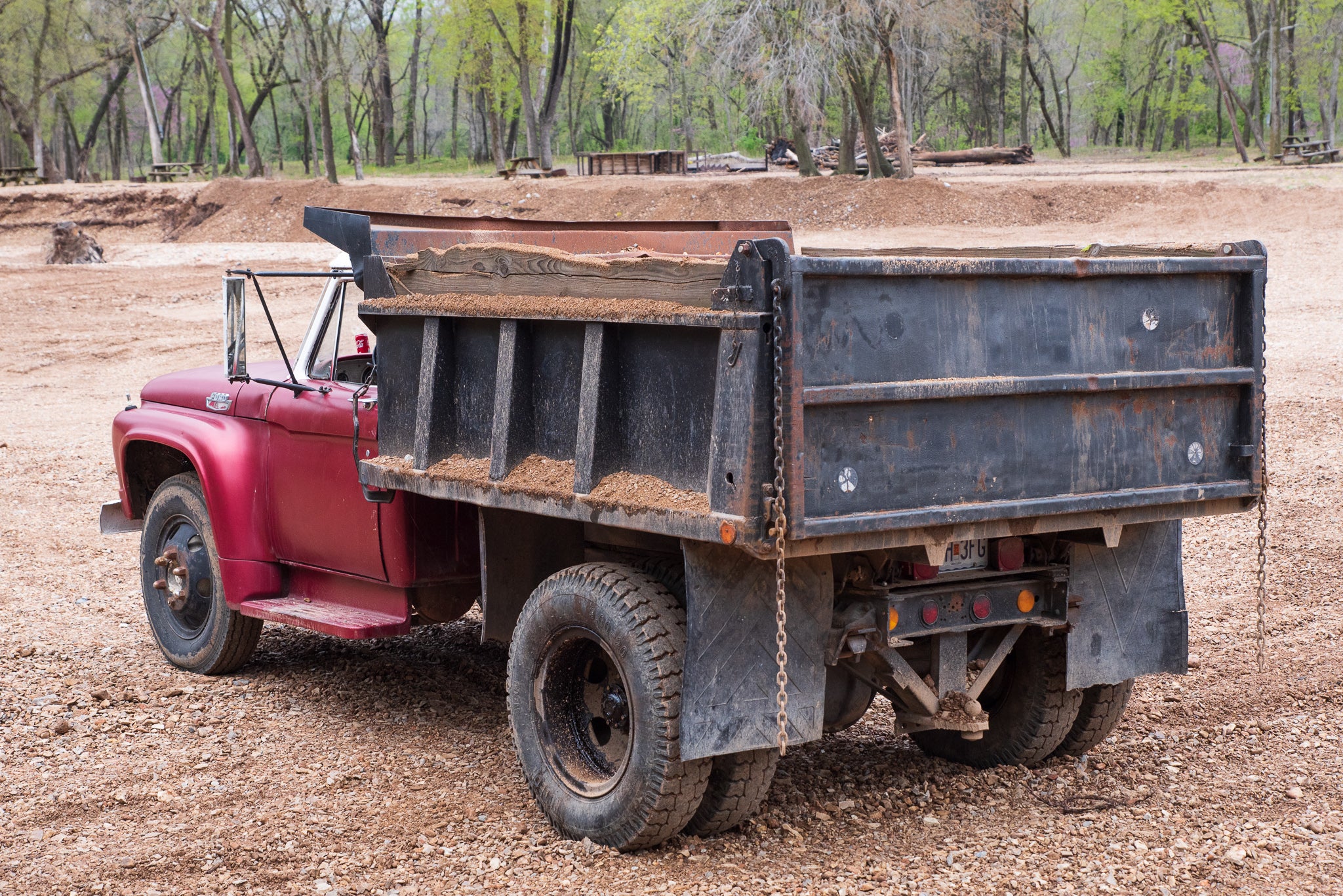 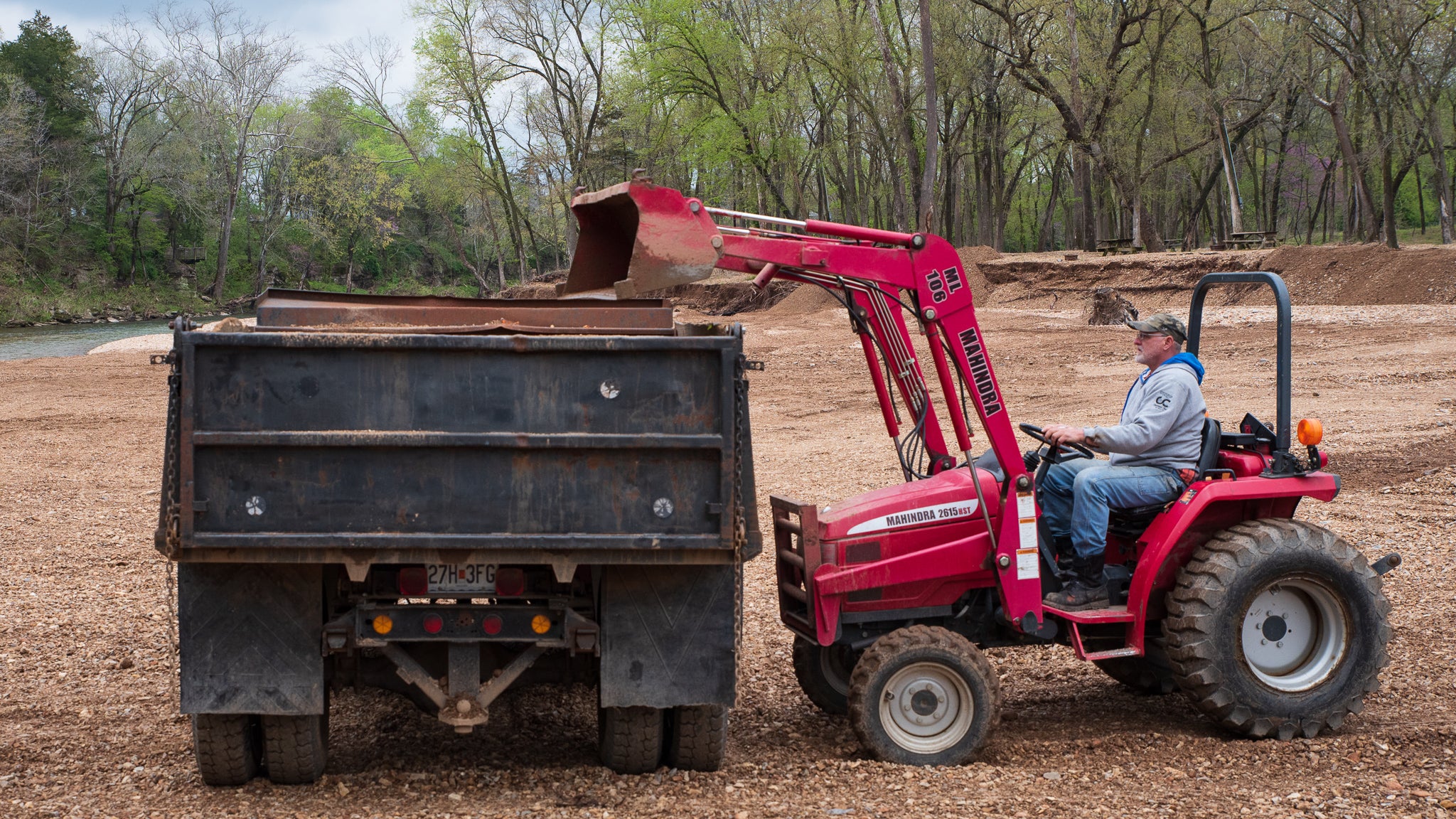 A January flood dug out yet another hole near the entrance of our campground. Each year, it seems, that hole gets bigger and bigger; I hope now that it's reached its final form. At a little over six feet deep in spots and 20 feet wide, we had our work cut out for us. Rather than solely use gravel from the island, though, we actually hired out four 10-wheeler loads of red clay so it doesn't wash out immediately. We then covered that with creek rock from the old island and smoothed it over, making it look like it was never even there and saving a pretty important tree that holds up a crucial power line for the campground.

Oh, and don't forget all the usable beach we've got now.

I tried my best to take photos throughout the process. It's not perfect but you can at least get a good idea with these shots, particularly the drone views from my photographer friend Ryan Cox (@rcphotonwa): 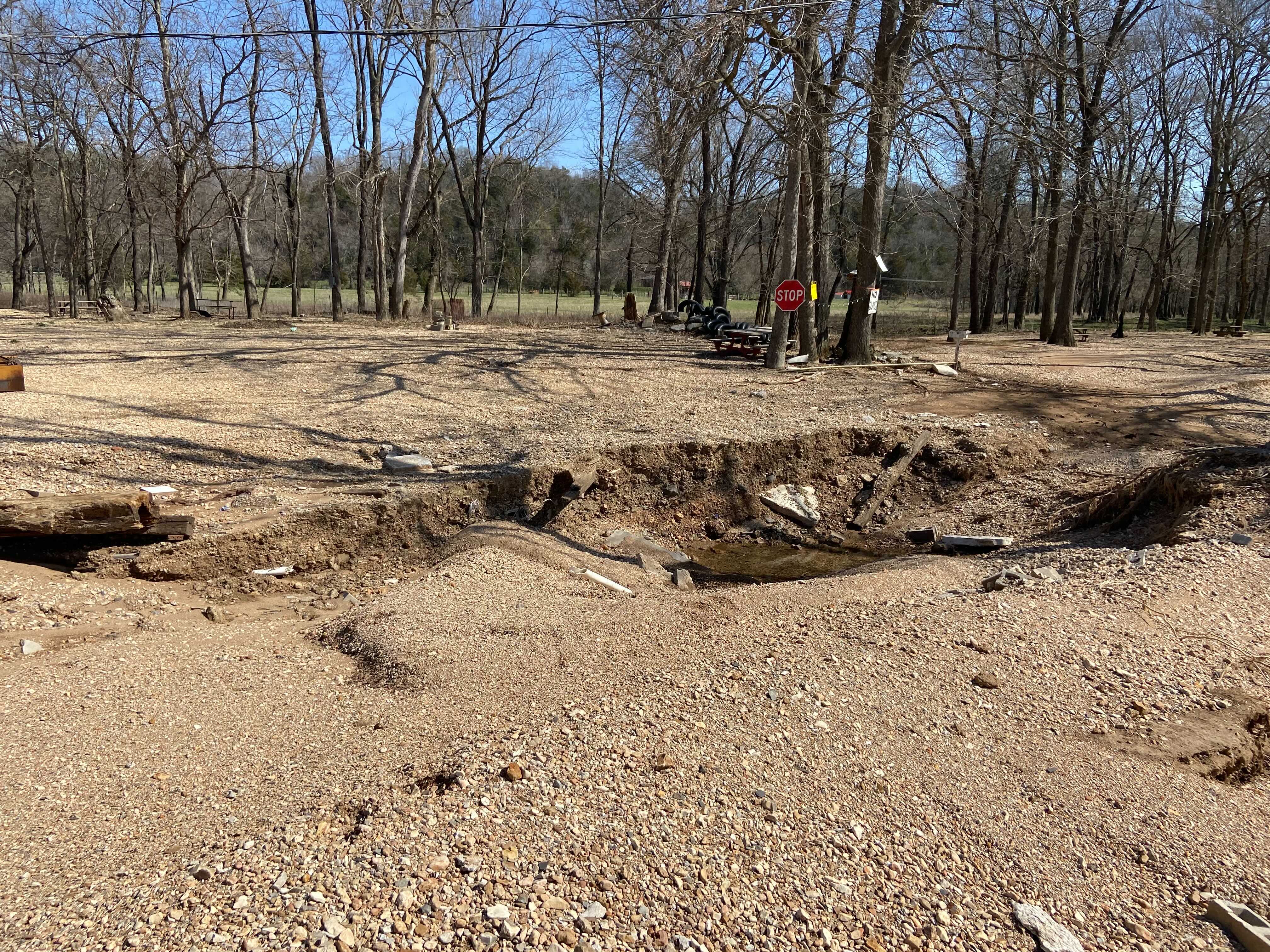 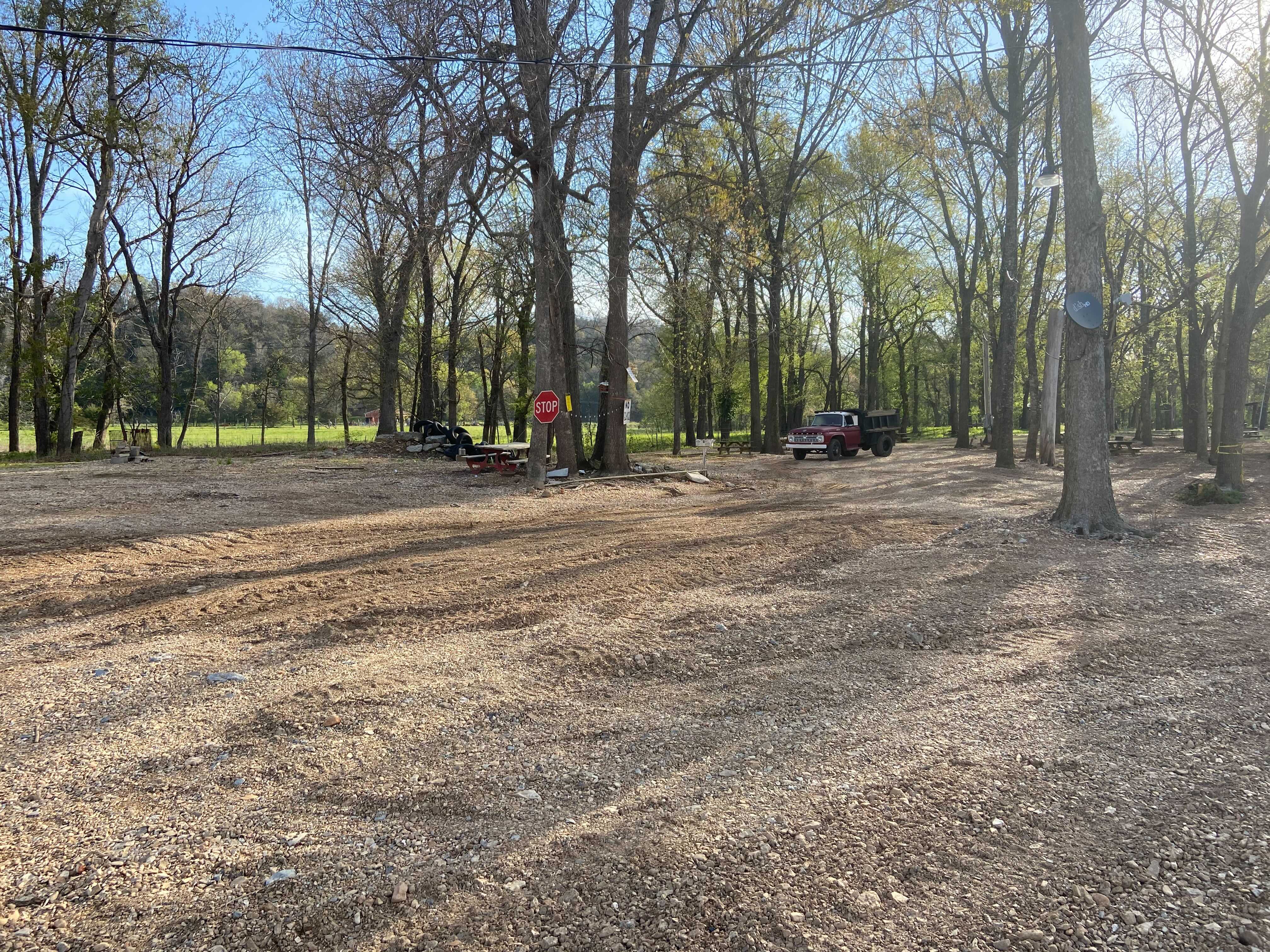 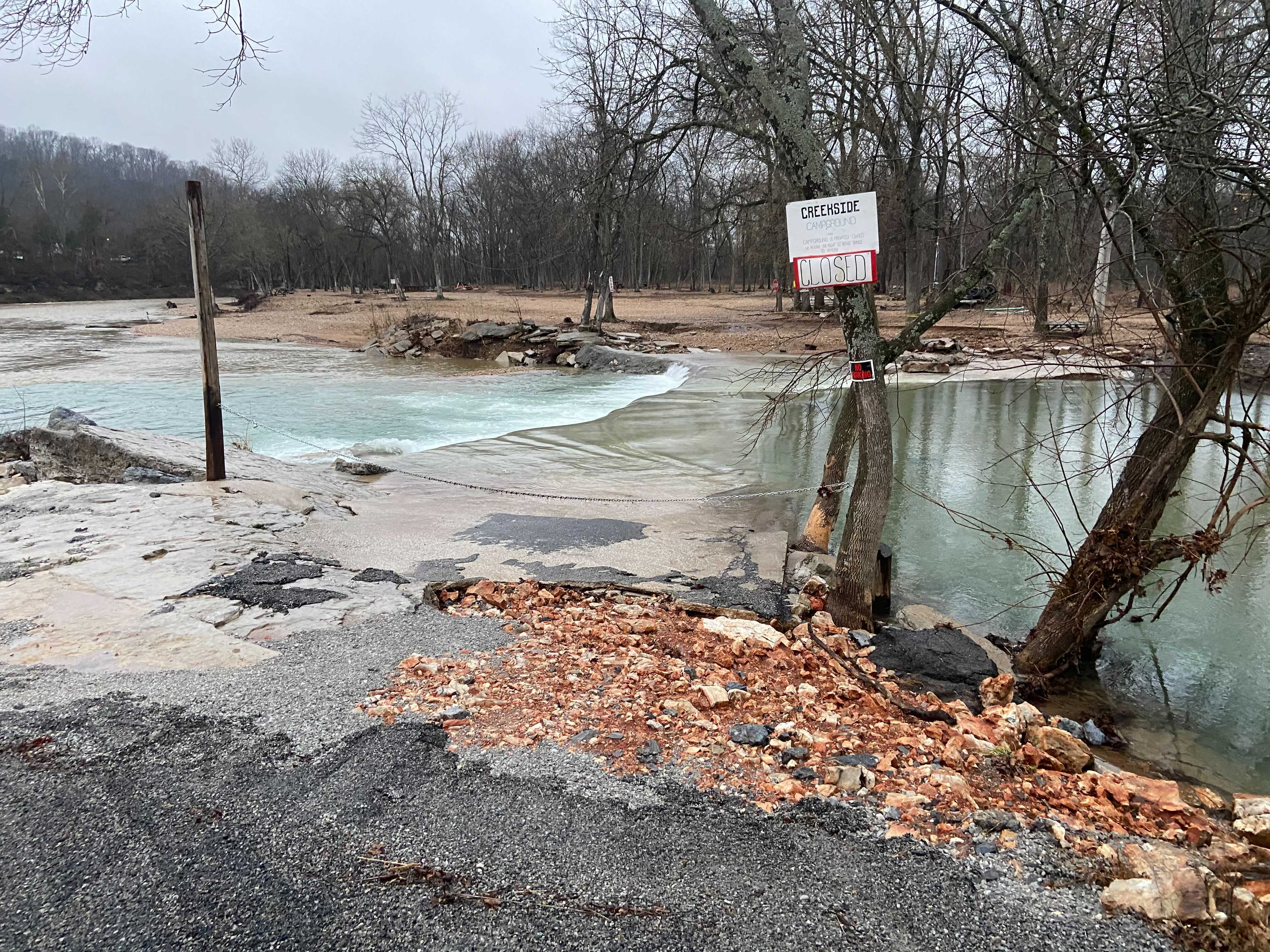 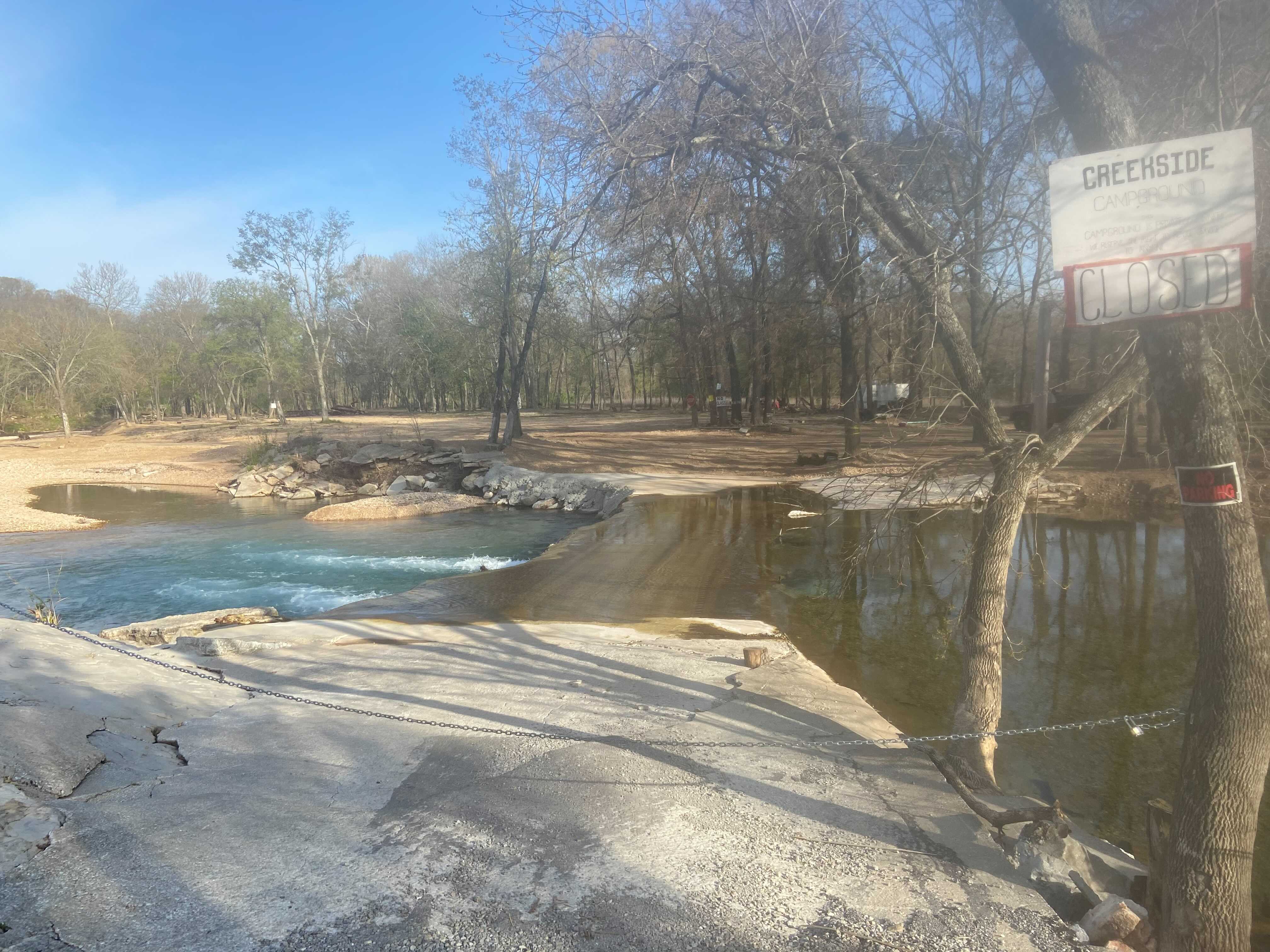 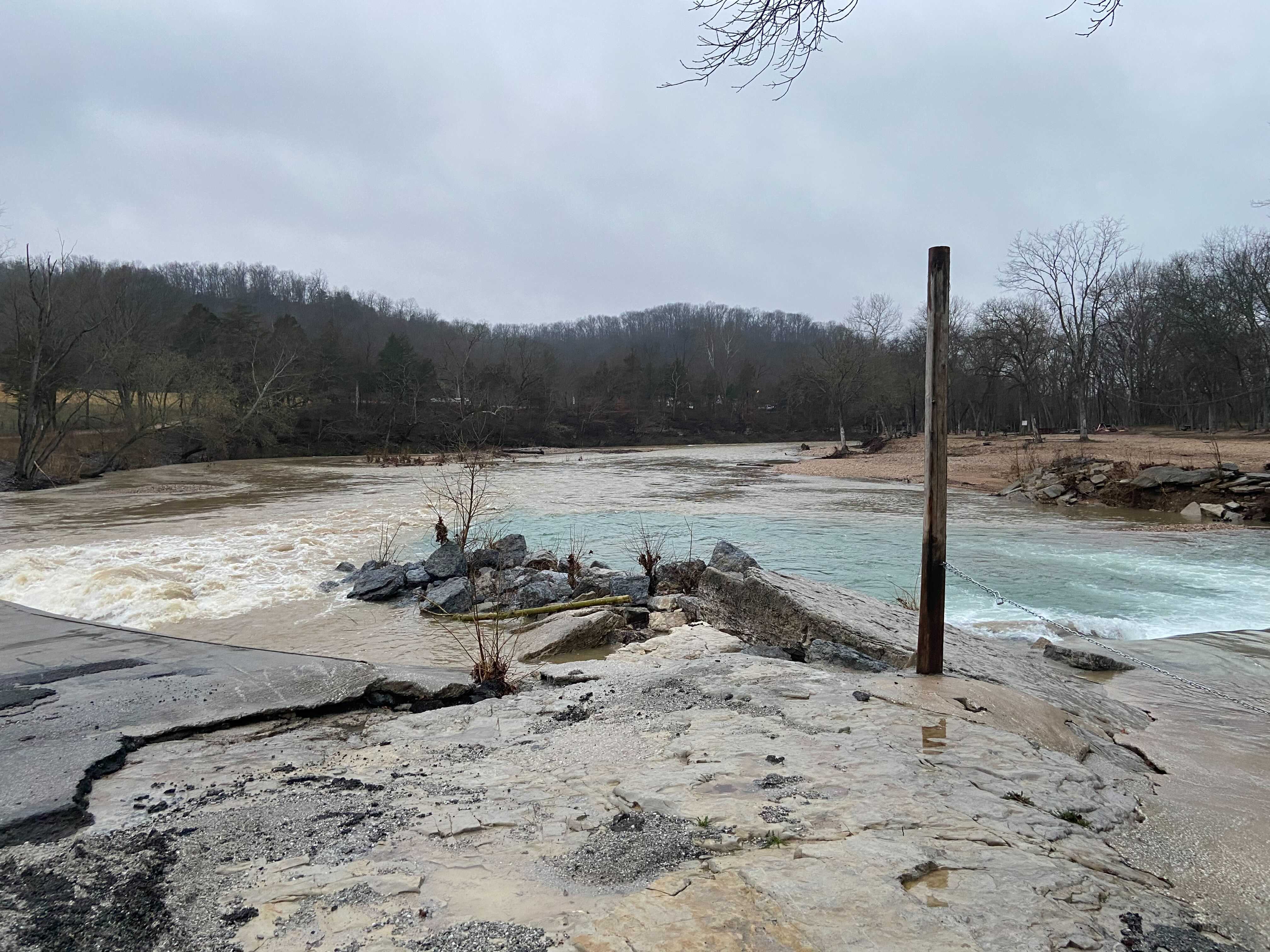 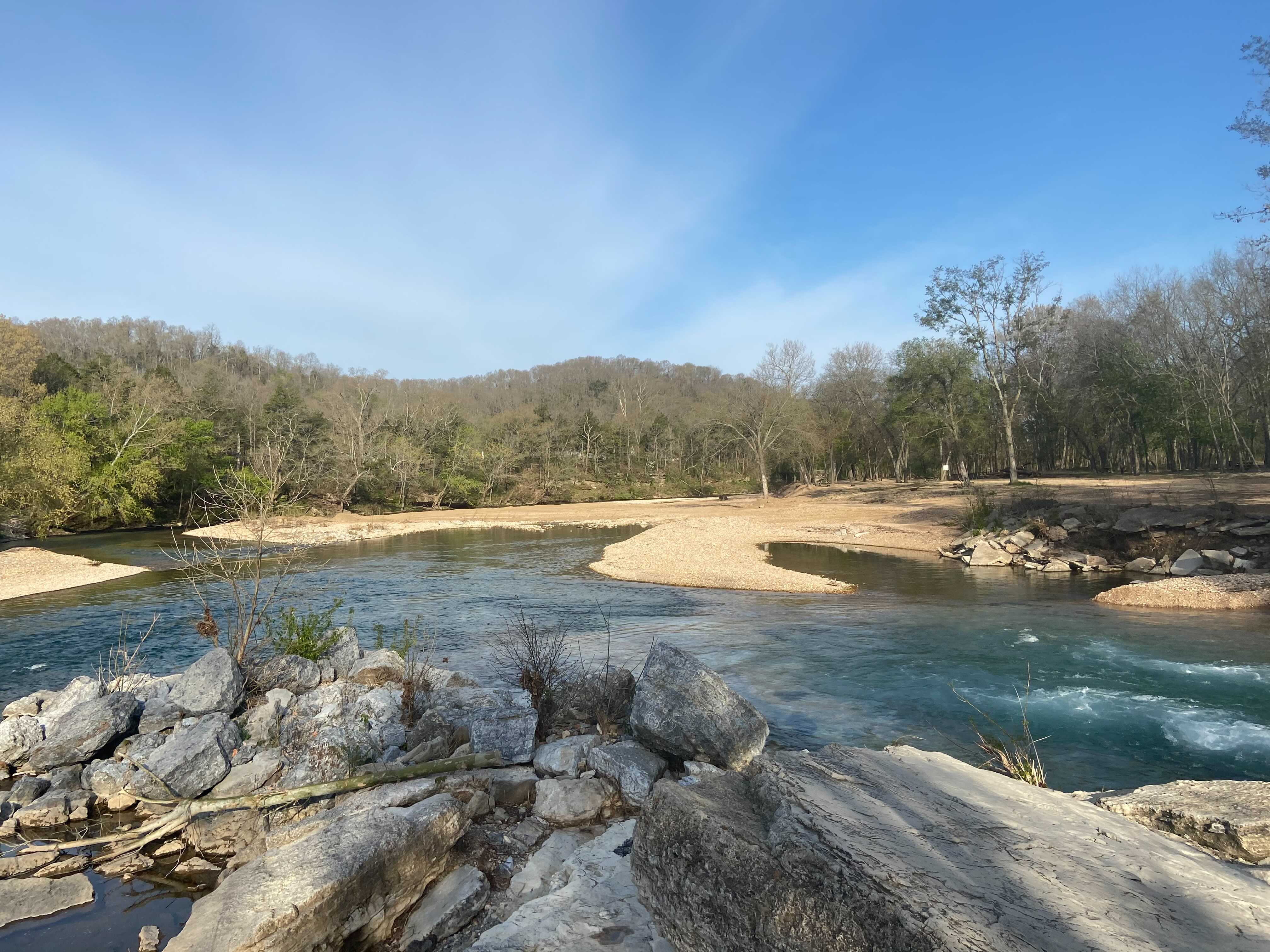 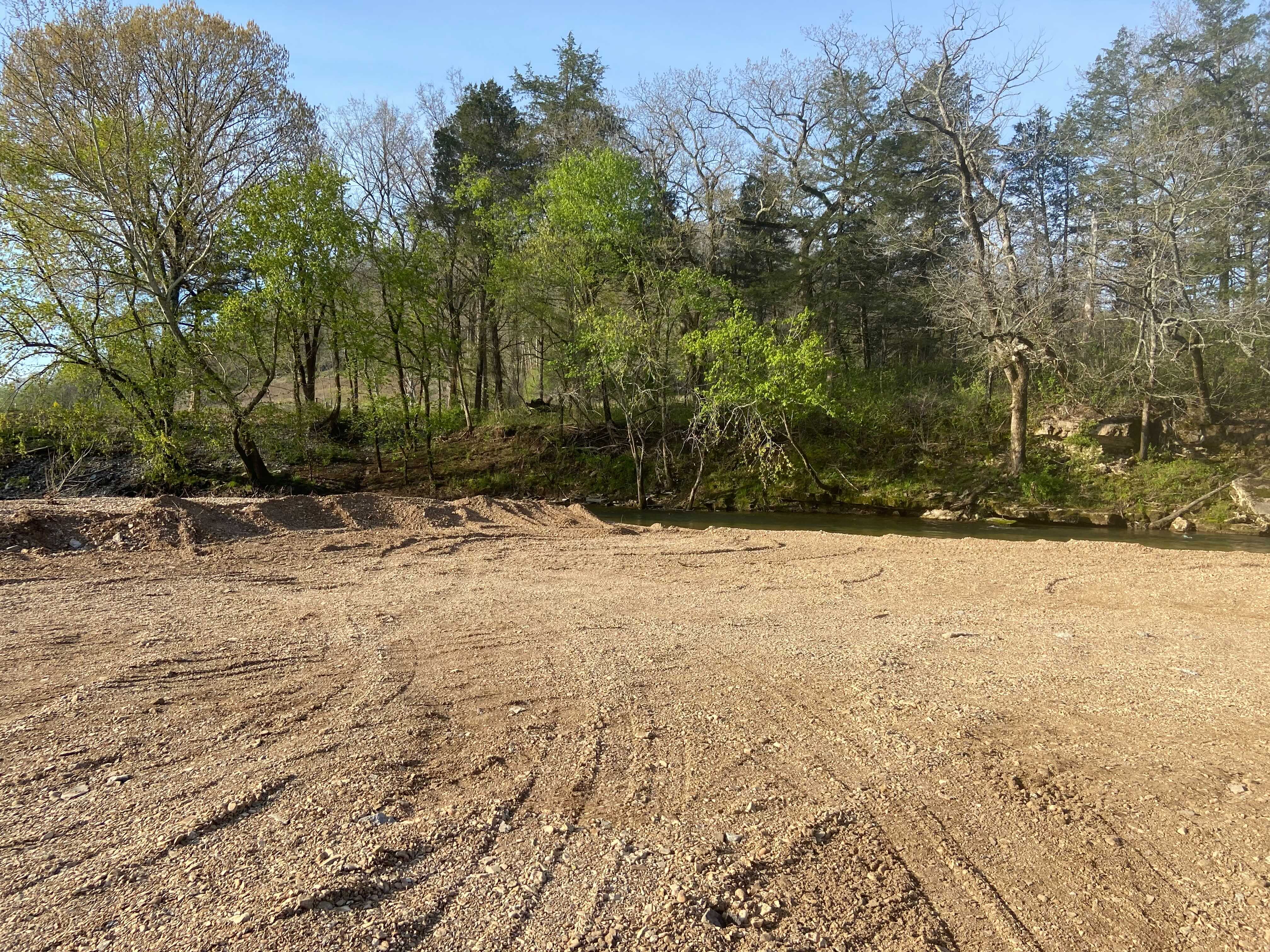 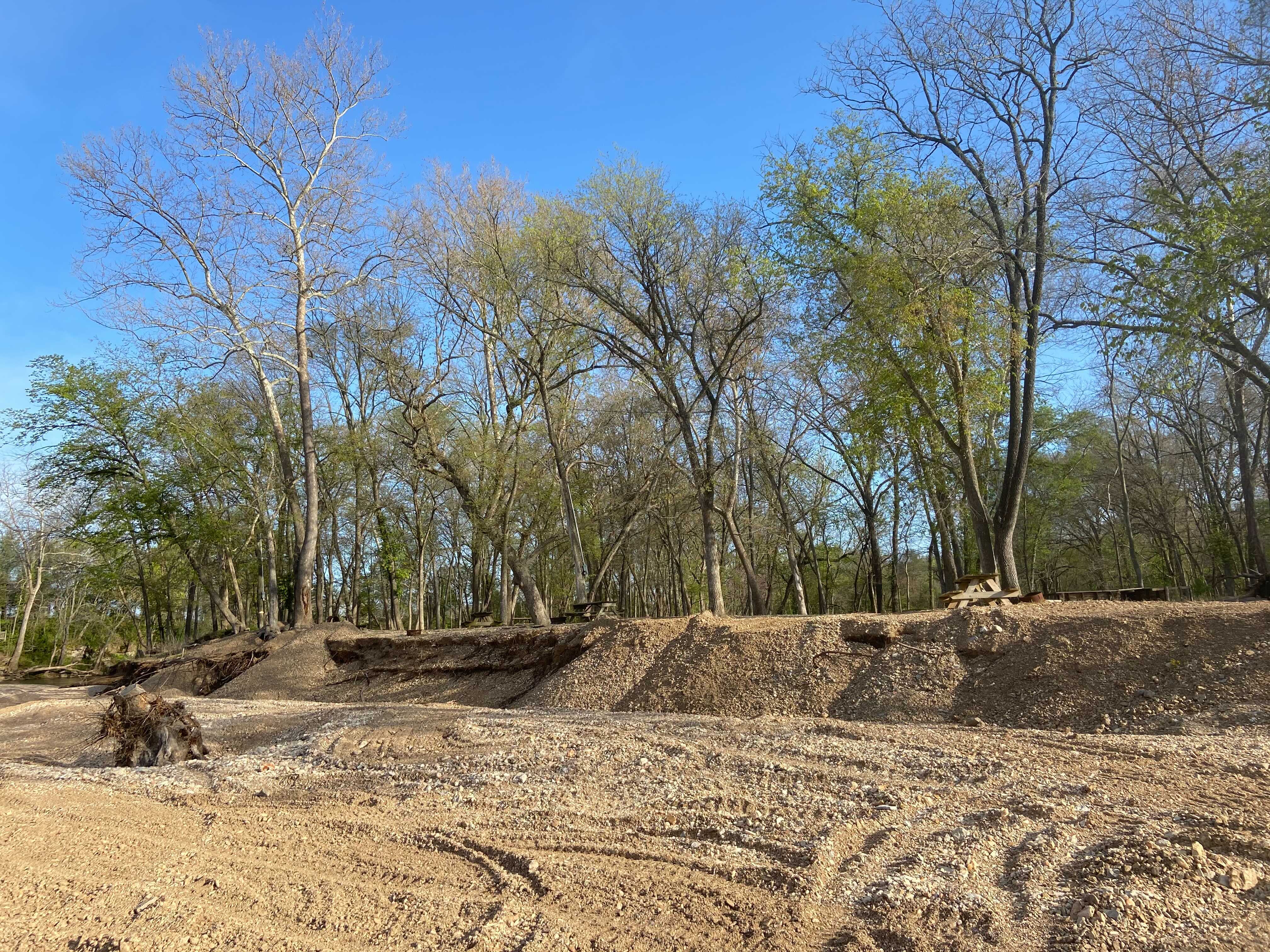 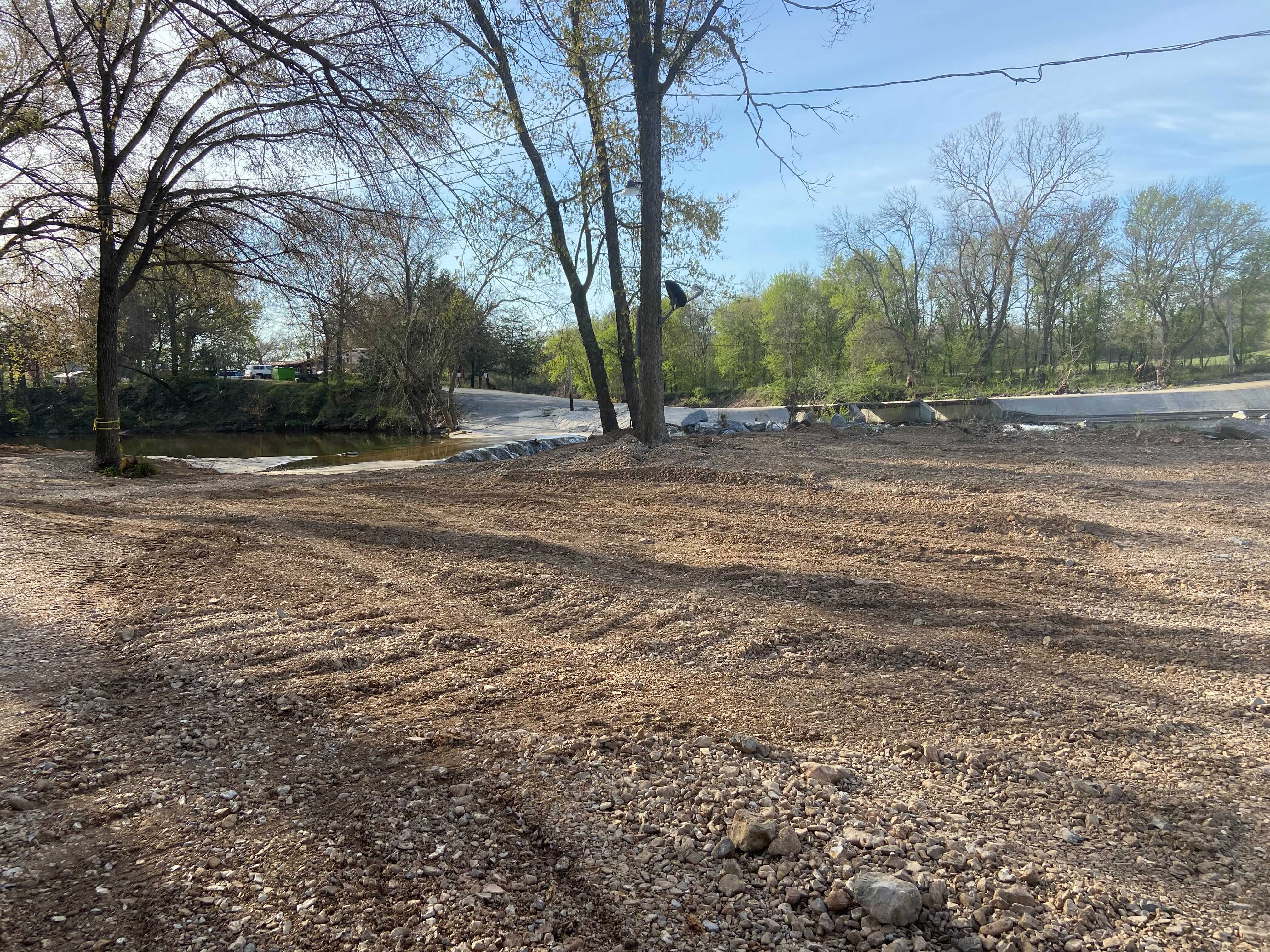 Now our beach is back, that gigantic hole is filled, and we have a new bridge. I'm happy to say that my Ford was an immense help in each of those jobs. It's about time to let it rest and administer some TLC, but in the meantime, I'm praying we don't get too much rain—two million pounds in one year might be a stretch.