♬ I could’ve missed the pain, but then I’d have had to miss the dance. ♬ 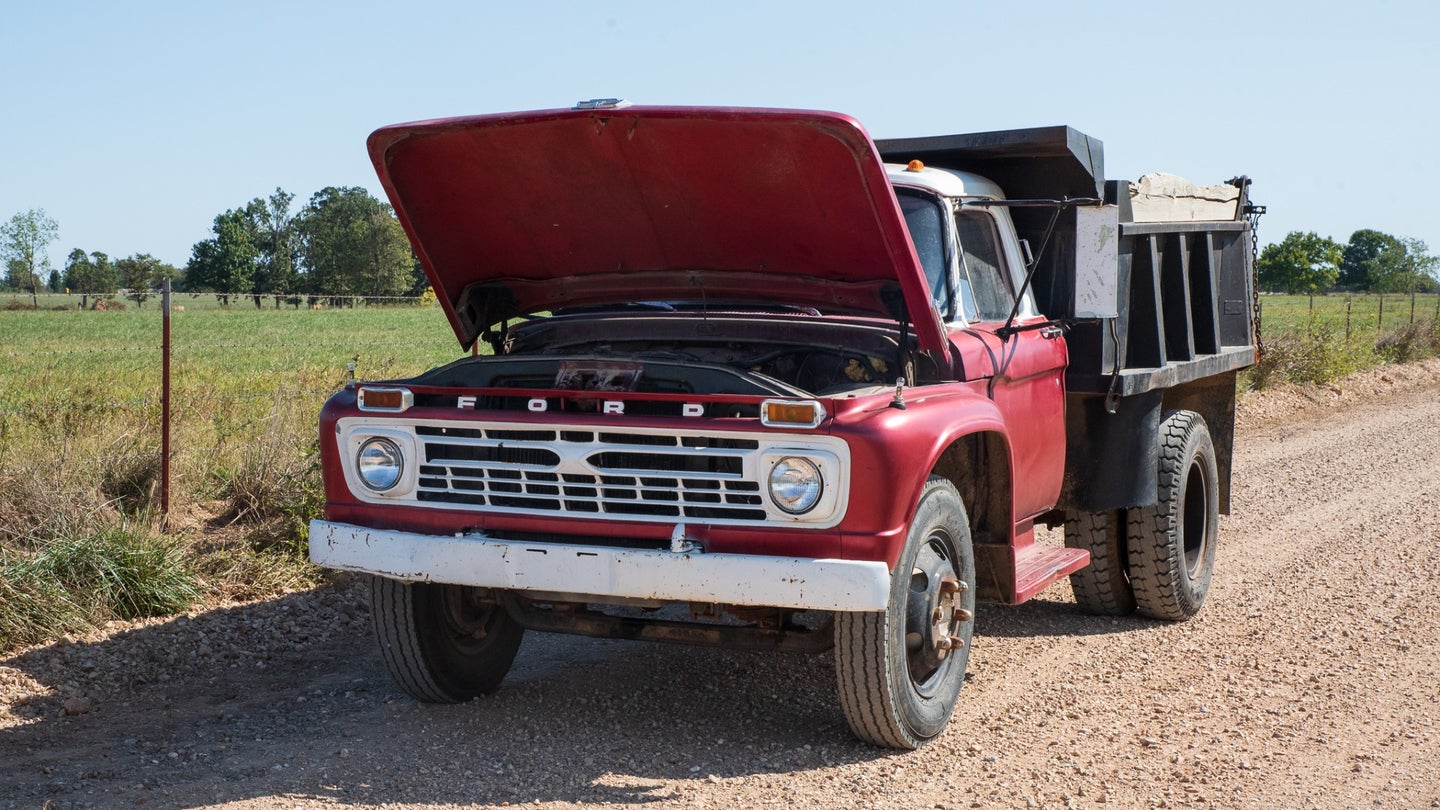 If you're new here, then you haven't had to suffer through untold weeks of me chasing down a stubborn problem in my 1966 Ford F600. Lucky you. I on the other hand, have had to suffer through seemingly endless fuel delivery problems, oftentimes on the side of the road and oftentimes with a tow chain hooked to the front bumper. But those days are over. Over, I tell you! Yes, I've finally fixed the damn thing—and it only took a combined 20 minutes, if you don't count the three months I've spent trying to figure it out.

My wallet's only a little lighter—fine, maybe more than a little—and my pride is ever-so-slightly damaged, because it all came down to a stinkin' fuel line and a loose wire. How could that be after I swapped every rubber and steel line I saw, from the cab to the pump to the carburetor? Well, it's because the problem child was actually a piece of braided hose I could not see, tucked behind my vacuum-powered brake booster.

Rewinding a bit, the issue first popped up in late June when I was driving home, at night, up the biggest hill in a 100-mile radius. Maybe not, but that's how it felt and when your big, heavy truck is on the verge of dying and rolling backward into the abyss, you tend to exaggerate a little.

I initially thought the problem was tied to vaporlocking. The truck would run fine after cooling off and I could drive anywhere between 30 minutes and 30 seconds, though it essentially always resulted in a humiliating dilemma. I wasn't getting fuel and I couldn't figure out why. I thought old trucks were supposed to be simple?

Despite my wives' tale clothespins that were supposed to prevent the fuel from bubbling before completing its journey, the gas was going...somewhere without ever reaching the humble single-barrel carb. I tried to remedy this by replacing the steel lines with rubber ones, and I also relocated my electric fuel pump from the engine bay to directly underneath the cab. This worked for a while, and by "a while," I mean roughly six miles. Long enough for me to head down the road and require a tow to get back.

I also suspected it might be the spark, so I swapped my old and crusty distributor for a single-wire, all-in-one unit. Wiring that up proved to be pretty tricky seeing as I'd never done it before. Truth be told, I've never done any of this before, but I digress.

Still, nothing was helping and, more frustratingly, the problem was intermittent. I couldn't always recreate the issue, especially if I brought a buddy over to check it out, and it seemed like a lost cause. To think this trusty old truck I'd spent months driving, sometimes daily, was giving me a fit that I just couldn't control.

At this point, it was mid- to late-August and the Ford had been mostly broken for right around two months. Worse yet, I had bought a 1963 International Loadstar that also broke as soon as I brought it home. So there I sat, bummed with roundabout 20,000 pounds of metal parked in my yard as decorations. Guess things could be worse.

My mechanic crew, which consists of my dad, grandpa and friend Bill, decided enough was enough and soon came over on a weekday to figure this out, hopefully for the last time. A visual inspection turned up nothing until we traced the fuel's path all the way from the old-school 300 inline-six to the tank, and there was a probably 55-year-old hose that had completely collapsed. I mean, hard as a rock. No chance was fuel going to make it through that.

I had a spare piece of rubber line on hand, and we quickly swapped it in and went for a bittersweet test drive. See, I was happy because it worked; I was sad because these months of inner turmoil were caused by such a tiny fault. And then I was sad because it soon stopped working. Again.

You might remember in my truck column from early September—y'know, the one where I talk about breaking everything I touch—that a week after I fixed that busted line, the Ford died again while I was driving it. (I also managed to break the bumper of the Lowe's delivery truck whose driver tried to give me a pull.) The symptoms still pointed to a fuel issue, which was impossible given that I'd clearly solved that problem. Clearly!

The past few weeks have been crazy as my wife and I have been fixing up a new-to-us house while working our normal jobs. For me, that meant tracking down the owner of the world's most famous Jeep Wrangler to find out why he got stuck on that highline bike trail in the first place. What I'm getting at is, I didn't have time to screw with my always-broken truck that had dealt me more heartbreak than good times in recent memory. Essentially, it sat for almost three weeks without me so much as popping the hood.

Well, I finally did that last Friday, only to immediately spot a loose wire I'd never noticed. Always a bad sign, so I looked for its home and found a bare prong sticking out from the resistor on my firewall. See, the way I understand it, the wires going into the resistor run at 12 volts while those that run out of it are reduced to six volts. Well, with the one on the passenger side unplugged, my electric fuel pump would cut out when trying to crank the engine, causing it to work initially and then fall on its face with the key turned all the way.

I promptly plugged that sucker in and, wouldn't you know it, I have a working truck again. Two working trucks, as a matter of fact, and I feel pretty great about that.

There's plenty of work to do at our family's campground as we repair a bridge and play a little bit of real-life SnowRunner with these old rigs in the coming weeks. I can't wait to tell you all about that, but until then, I'll be driving this thing to the post office every chance I get. And I don't even have a PO box...

Caleb Jacobs is Deputy News Editor at The Drive. He buys weird things, like a '66 Ford dump truck, a '65 Chevy school bus and a '63 International Loadstar. We can't seem to stop him from writing about them. Send him a note: caleb@thedrive.com