Pandora’s Box Is Filled With Bushings

Because the simplest jobs never actually are. 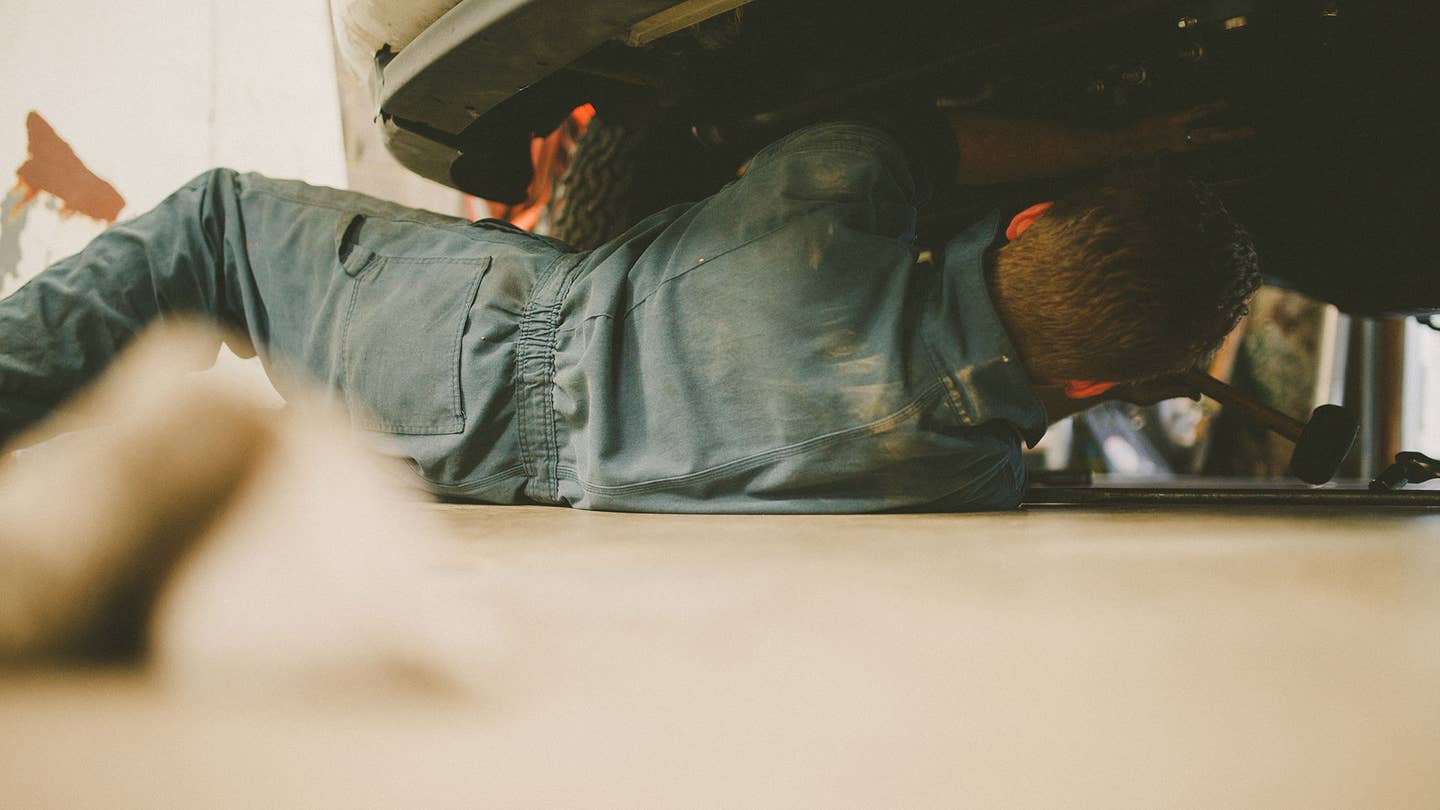 I put this job off because it’s hell. A guaranteed shitfest of writhing around on concrete, tangled in extension cords and air lines, scrambling in a dusting of burnt rubber and metal shavings, hands and tools and coveralls slathered in tacky assembly grease and blood. But, with three of the six bushings torn on the Dodge, they’d all need to be replaced before installing a new camper in California.

The truck was inoperable two days before I was set to leave. I’d disconnected the rear leaf springs, left them hanging while I set an Armageddon upon the old bushings. Drilled and torched and cut and hammered until the pressed shells yielded. The first one took me four hours. It went quicker after that.

The new bushings arrived Thursday, the familiar yellow Energy Suspension box promising to rejuvenate what time and work had dismantled. I dumped the contents, counted the bushings. Made sure everything looked of similar diameter. Then I disconnected the rear mounting points and set to carving the old bushings out of the springs and shackles. I built a draw press just for this. Bought a scissor jack from pull-a-part and cut it into a perfect little workhorse capable of exerting tremendous pressure on just about anything.

It’s worked before. Sucked the hammered bushings right out of our old International. Saved me a lifetime of cursing and beating and burning. But the Dodge’s factory bushings are different, with vicious little metal cuffs on each side, and no amount of persuasion would press the things out. They’d need to be cut from their moorings. So cut I did. And when the old shells were wrenched and lying on the floor, I set about pressing the new bushings in.

That’s when I realized something was amiss.

One of the goons at Energy had packed the wrong bolt sleeves. Wrong in every way. Length. Diameter. I called the number on the box. Got a guy in tech who confirmed that, yes, I had the right part number. Yes, I had the right bushings. No, I had the wrong sleeves. No, they couldn’t be overnighted. I’d have to go through my point of purchase.

I looked at the truck, wedged halfway out of the garage under our house on a 20-degree night, the rear axle attached at just two points. I felt the pressure of a narrowing window of time. Local businesses had been closed for hours. I’d have to hunt up new sleeves in the morning.

Except, those aren’t something anyone just has lying around. I called every hardware store, parts store, dealer, performance parts vendor, diesel shop, and farm supply outlet within 100 miles. No one had them. No one could get them to me quicker than the next week, when I’d have to be in Woodland to drop on the camper. None of this did me a lick of good.

So I called my machine shop.

“Yeah, I can whip those up. Be done around lunch.”

I got out for $40. Not criminal, given my desperation, but a certain shade of infuriating given that I paid Energy good money for a complete kit, then needed to have pieces manufactured to get the truck back on the road in a timely fashion. Maybe that’s how you lose a customer for life? Guess so.

The new sleeves slid right into place, pretty as can be. I bolted the truck up late Friday night, my hands torn from fighting the air hammer, knees and spine singing from 10 hours on the cold concrete. I never remember that bothering me before. The night before our daughter’s first birthday, a sore back feels like the first itch of my years.

When I left Tennessee for the West Coast to pick up the camper, there was still frost on the ground. The old Cummins rattled away under the long hood in front of me, the sounds of my last long drive alone for a long while.