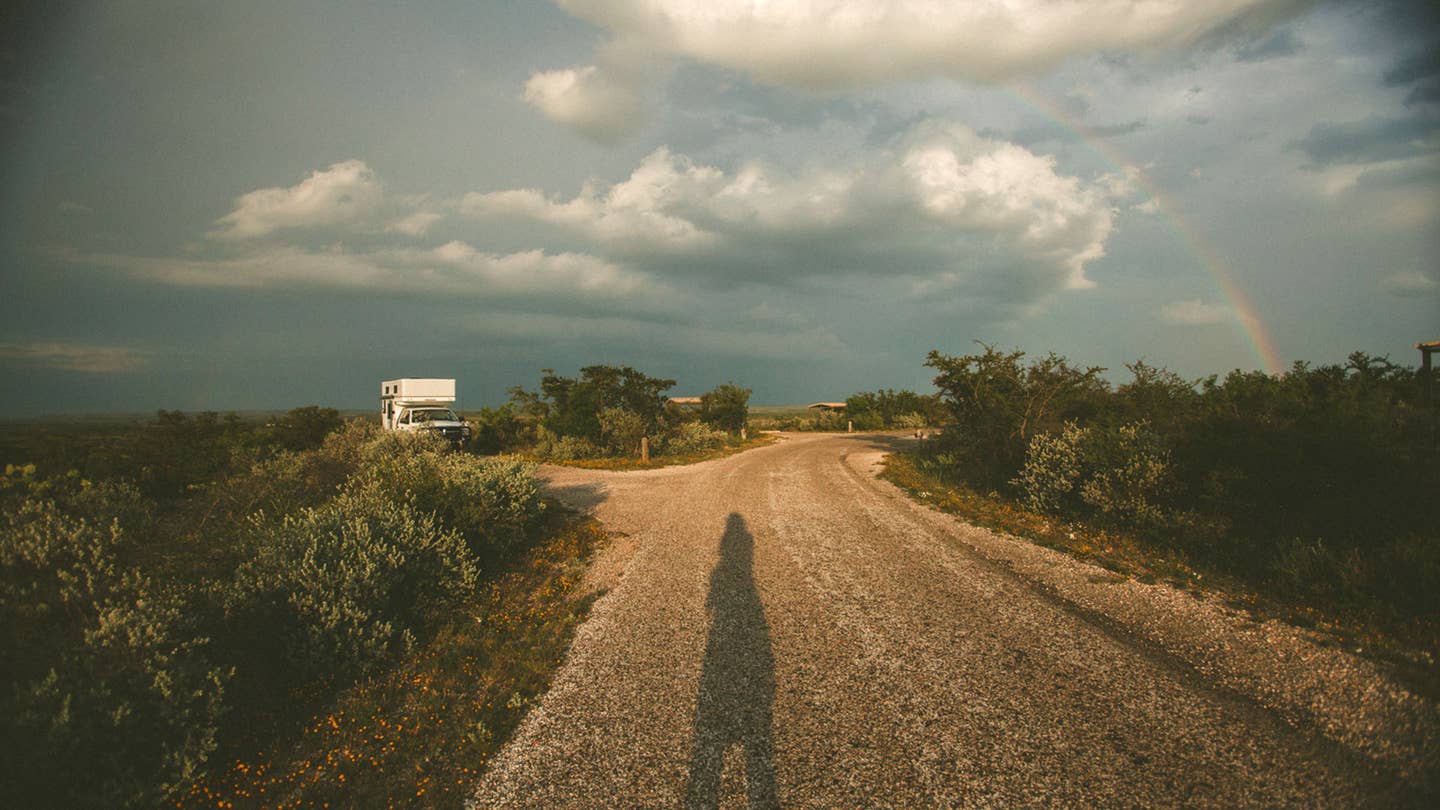 It’s raining in Mexico. I can see it, a big storm pushing its way north on a quick cool wind. The top of the clouds burn orange with the setting sun, their bellies grey and prism-streaked. We see the lightning from where we sit but hear no thunder. It’s far off, but close enough. It could be on us at any minute. It could pass right by.

There are two more: one further to the north and its twin to our west. Lighting flashes along their bows and stabs the desert below. The first flickers of starlight hang between them.

You could fall in love with anywhere this time of year, but the flowering desert makes it easy. Everything is in bloom, every thorny bush and spiny cactus, every tree and low grass tuft topped with spectacular blossoms. The full spectrum of yellow: tawny to vivid. Maroon reds and purple-blues. Milk whites. Acres of wildflowers, true to the name.

They're invisible from ten feet away. You have to be in there, your boots on the limestone or in the dusty gravel, wading among the rattlesnakes and roadrunners, to see the first petal.

After a week in the cozy comfort of a friend’s house in Austin, kiddo was on the warpath. She fussed in the truck, incensed at being strapped down after so many days of wandering from living room to kitchen. We pushed four and a half hours to Seminole Canyon, let her crawl around on the stones there before loading her up to hike a rim trail.

What little we saw of it was gorgeous. This place can get 20 inches of rain in a single go, and the Earth is carved with it. A sprawling, empty canyon with round walls snaking its way to the Rio Grande. You can walk the full edge, look down on a turkey buzzard flying fifty feet below, his wings arched and graceful, individual feathers working the thermals. You can chase lizards out of the scrub and be glad of a papa rattlesnake’s kindness, the whisper-chat of his tail warning your ankles away. This place is an honest wonder, and beyond some millennium-old paint on the canyon walls and railroad scratchings in the sand it’s no different than it was 8,500 years ago.

We barely made it two miles before the girl went full meltdown, cursing us with a chorus of wails inches from my ear. Tired. Hot. Hungry. Thirsty. Uncomfortable. Whatever the cause, she was done. We turned and walked back the way we came, stopping every few steps to retie her floppy yellow hat. It’s a long way to go with your child's screams in your ear. Those miserable howls spooked up the same thoughts that have hounded me since our first night in the truck:

This was a mistake. All of it. Selling my grandfather’s house. Turning our backs on the soft and easy life we had. Another check mark on a lifelong list of stupid decisions, idiot exercises in shortsighted selfishness and cowardice and a fool’s plan to run from the responsibilities of adulthood. I count a handful of happy hours out of the last 40 days. None of this seems worth it.

By the time we reach the truck the girl has cried herself ragged, her sobs coming in sharp spits, her head on my back. We pull the pack from my shoulders and put her down, her cheeks wet, brown eyes welling. She quiets when we put her on the camper floor, happy to rake her alphabet magnets off the fridge door.

We’re all spent, and when Beth asks what I’m thinking, I tell her. She looks at me with sad eyes. It’s not the first time she’s heard it, but it doesn’t hurt her any less.

“I’m sorry you’re not doing this solo,” she said.

That word, solo. Last week someone asked what I’d learned so far. What had 40 days of wandering taught me? There’s only one revelation: the spiteful knowledge that there’s a common denominator between my listlessness, my dissatisfaction with a stack of good jobs, with every house I’ve ever called home, with every bike and car I’ve ever owned, with former friends and lovers. With a marriage.

I make dinner and Beth puts kiddo to bed as a long line of thunderheads start puffing their chests. Later, we’ll sit in the dark and let southwest Texas put on a show for us, the wind whipping fireflies through the brush like embers in the dark, the moon shining on the living desert as three wide thunderstorms pour themselves toward the horizon.

We don’t say much, just sit still and watch the storms. Hold fast to the happiness it brings. Close enough, and so far off.