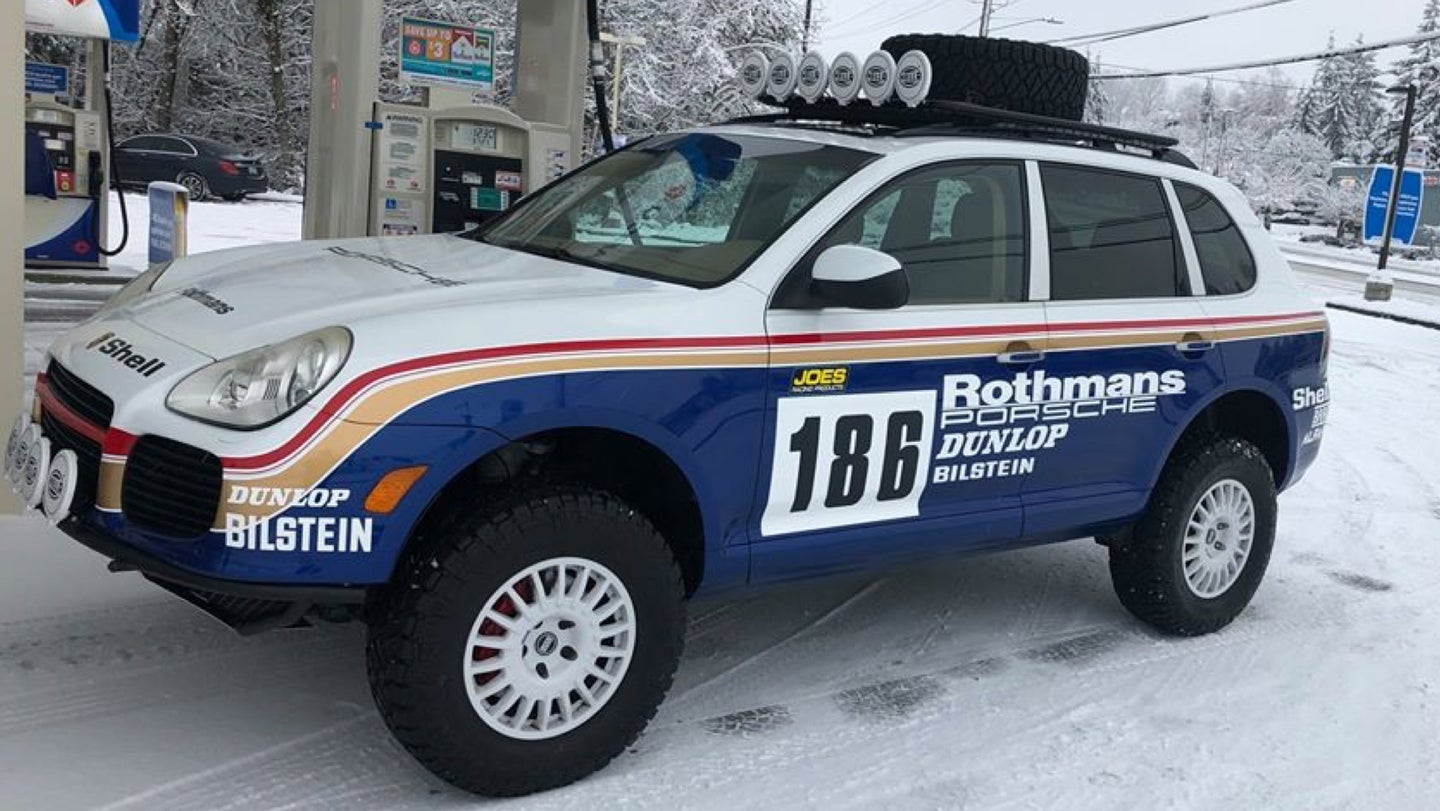 Porsche owners love putting classic Porsche racing liveries onto things. Even Porsche itself does it these days, putting Pink Pig schemes on new Panameras for show and offering Martini stripes as a factory package on the 918 Spyder. Some would even say it's played out, but those people are boring. When a racing tribute is done right, though, even those haters have to admit that it's glorious.

Here's one of the tributes that's done right: a Rothmans Paris-Dakar Rally-liveried Porsche Cayenne. The Cayenne didn't exist in the mid-eighties when Porsche won the 1986 Paris-Dakar Rally with a 959, but 959s are a tad hard to come by.

That spirit lives on in this incredible 2005 Cayenne Turbo, which features the 450-horsepower twin-turbo V8, adjustable air suspension, locking differentials, and low-range gear ratio that came standard with the SUV, but with plenty of add-ons that help you put those features to good use. There's a skid plate, rally-ready bumpers, custom exhaust, and two rows of aftermarket rally lights. It all rides on 17-inch Braid rally wheels with Nitto Ridge Grappler all-terrain tires, with a spare mounted to the roof rack just like the original 959.

Best of all, it's up for sale on Facebook. For just $16,000—that's Nissan Sentra money—you could have a sub-100,000-mile Cayenne that's the subject of many oohs and aahs whenever it's on the road. It has a rebuilt title from some front-end damage that's since been repaired, but if you're using this correctly, you'll be adding your own scrapes and dings anyway.

There's at least one other Rothmans 959-tribute first-generation Cayenne around, but that's okay. This probably should've been a special-edition paint scheme from the factory anyway. Automakers' trucks and SUVs are what get turned into Dakar Rally entrants nowadays, and Porsche itself took the Cayenne rally-raid racing in the late 2000s. The overbuilt first-gen Cayenne deserves to live its best life, both on and off-road.