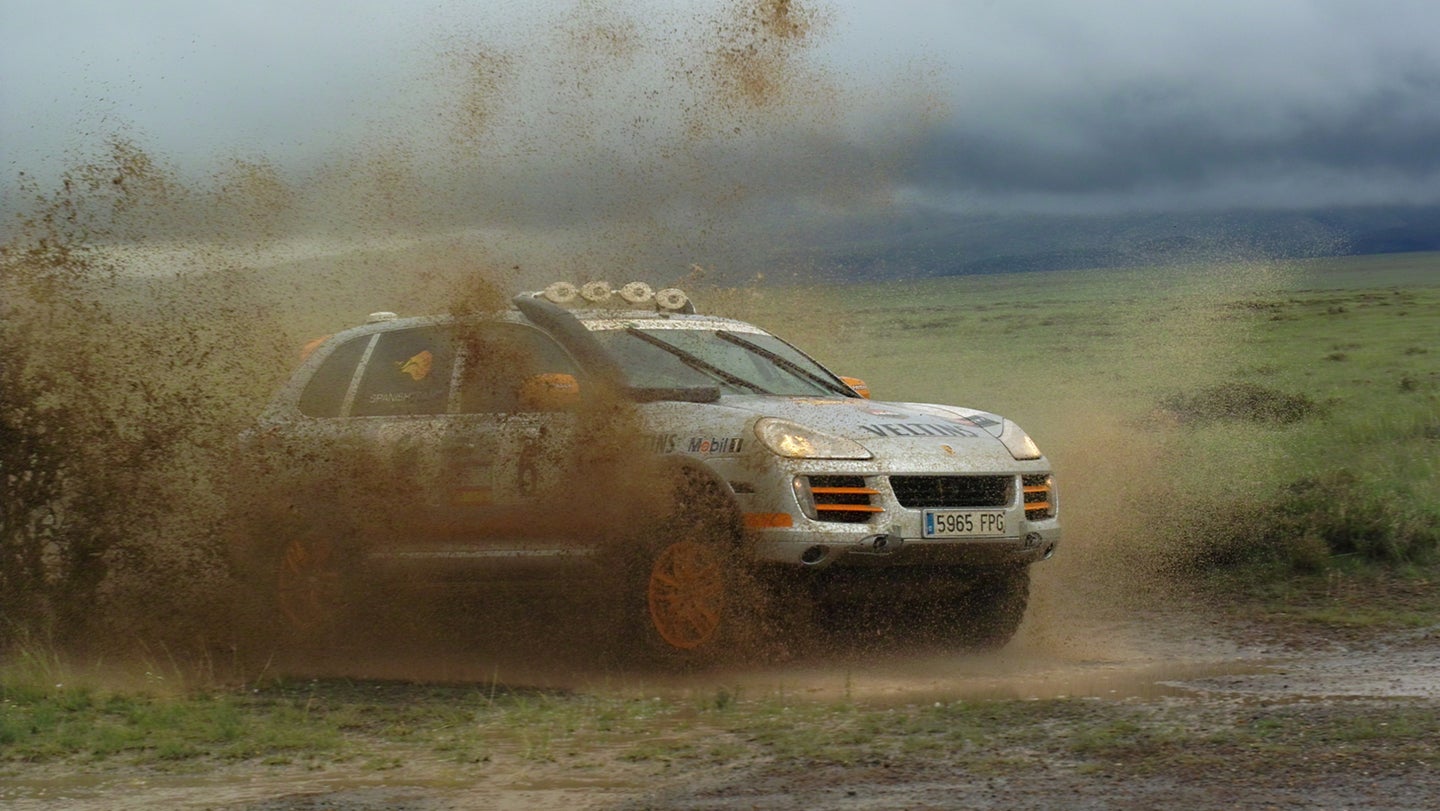 Porsche has a history of taking nearly every car it makes racing, and the Cayenne SUV is no different. In 2007, Porsche decided to take on the tough, roughly 4,411-mile long Transsyberia Rally with a set of factory-modified Cayennes. One of them won the rally in 2007, and because that wasn't enough, the entire top six finishers in 2008 were all Cayennes.

Only 26 Cayenne S Transsyberia rally trucks were built at Porsche's facility in Weissach. The manufacturer then released a special Transsyberia edition of the Cayenne in 2009 to commemorate its rally involvement, but the actual race trucks that it was based on are exceedingly rare.

Now the silver and orange example raced by Team Iberica in the Transsyberia Rally is up for sale through RMD, and it is wonderful. This 2007 Cayenne finished in the top five both times it entered the event and comes complete with a Porsche Certificate of Originality, a special Transsyberia book, and Spanish Technical Inspection Document.

To make this SUV such a dominant rally machine, Porsche picked elements it liked from the Cayenne S and Cayenne GTS. It got the larger 4.8-liter V8 engine from the latter that was good for 385 horsepower, which was then sent through a six-speed Tiptronic S transmission with a 4.11 final drive ratio.

Since this race was essentially a big marketing push for Porsche, many of the Cayenne's stock features were left in place, including Porsche Active Suspension Management and Porsche Traction Management. Its Porsche Dynamic Chassis Control system already came with a Special Off-Road Mode that lifted the truck, and its air suspension could raise the whole vehicle up nearly 12 inches. This helped a lot with water crossings, allowing it ford rivers up to 30 inches deep. The Cayennes also had the optional Off-Road Technology Package, which added a transverse lock.

Other modifications, like the big snorkel that prevents water from getting in the intake manifold, were things that I wish came on the roadgoing Cayenne. The Cayenne S Transsyberia had a fully caged interior, reinforced A and B pillars, meaty underbody protection, a handbrake in place of the foot-operated parking brake, properly chunky off-road tires, a front-mounted winch, extra lighting on the roof and a lightweight exhaust.

To get it ready to rally, the electrical system was rerouted and the passenger got a navigation computer to figure out the route. Two reserve fuel tanks, two spare wheels, and shovels sit where the rear seat would usually go.

Yet as the listing notes, there were some creature comforts in this stripped-out race truck. The Cayenne features two racing buckets in the front, orange dashboard trim and fabric door latch pulls to match the livery, an Alcantara-wrapped steering wheel for better grip, and diamond-plate steel flooring so you wouldn't slip getting in and out.

It only has 11,579 miles on the odometer, but don't mistake this for a garage queen. Many of those miles look like this:

If you haven't figured out what to get me for Christmas yet, this ex-competition Cayenne S Transsyberia is up for sale here. The price is $216,821 U.S. (€150,000), but that's definitely worth it to own a price of oddball Porsche rally history.