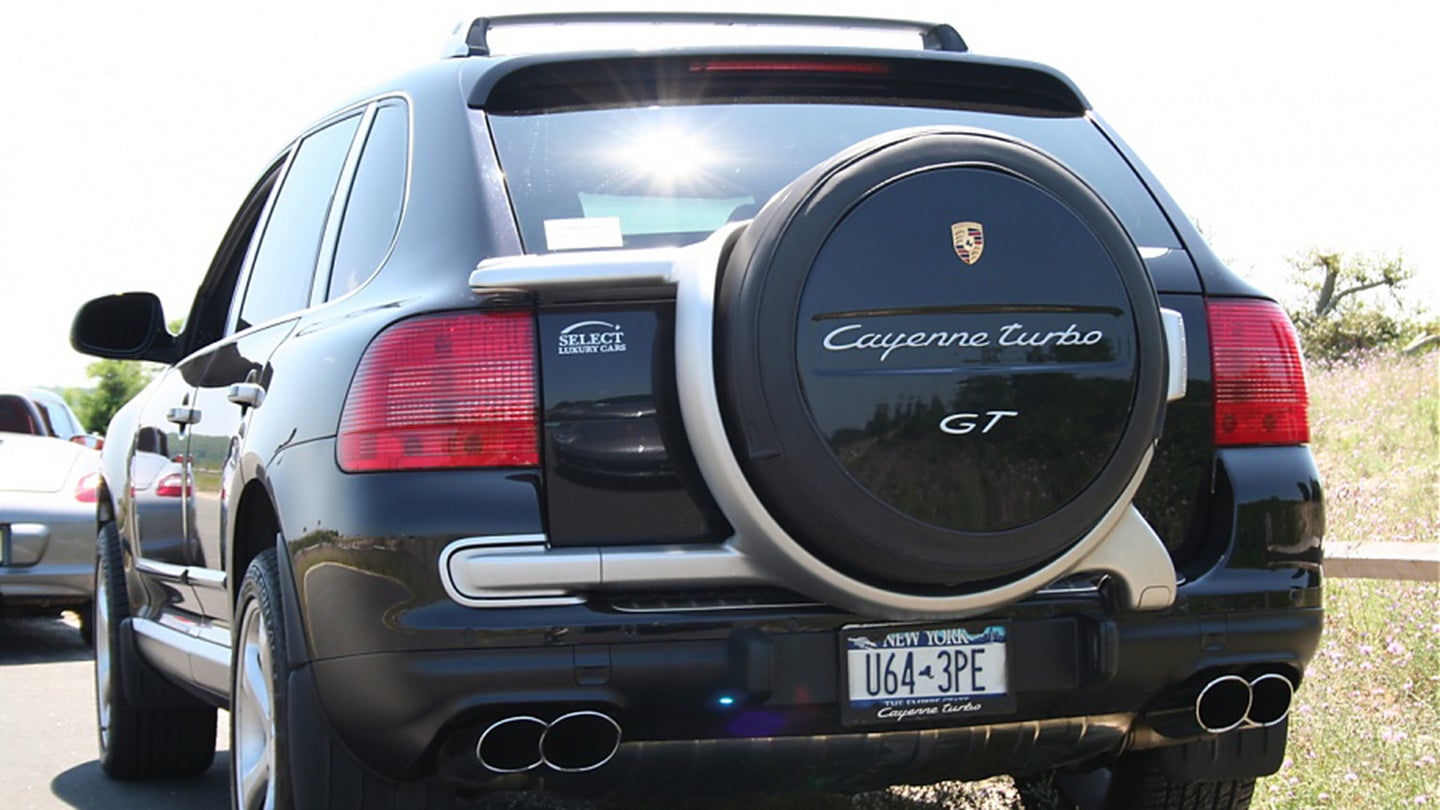 Stuttgart bet the farm on the first-generation Porsche Cayenne in 2002. The company was in near ruins, hemorrhaging cash, and without a new hit in years. But the Cayenne succeeded in that critical moment when most believed failure was imminent. It was helped by the nascent crossover boom, sure, but it also offered great on-road handling, real off-road ability, and a ludicrous options list—including the forgotten but incredible rear-mounted spare tire.

Though early reviews were mixed-to-positive, Porsche launched the Cayenne in untested waters, having never built an SUV. The German automaker knew the attributes worthy of the Porsche crest—speed, handling, and exclusivity—but how would SUV loyalists view the vehicle if it didn’t offer the same abilities and options of its closest rivals? Every conceivable advantage was benchmarked, and it was in that frenzy that the rear-mounted spare tire option was born.

Surprising for a road-first brand, Porsche wanted to emulate two luxury SUV stalwarts in particular with the Cayenne: The Mercedes-Benz G-Class and the Land Rover Discovery. These were luxury items based on utilitarian vehicles designed to handle the rugged stuff. Part of that image came from an extra tire dangling proudly off the tailgate, as if to suggest the owner could speed off into the bush at a moment's notice and not have to worry about a puncture. How adventurous.

So Porsche followed suit. Keep in mind, the first-gen Cayenne is a surprisingly capable off-roader. Having not yet realized that most buyers don't care, Porsche also gave it a true four-wheel-drive transfer case with low range, locking differentials, and an optional skid plate. But the tumorous spare tire is just a little more conspicuous given the Cayenne's curvy design, leading Porsche to make it an expensive option—between $1,595 and $2,960 depending on the wheel and tire equipped—and hope for a small gold rush.

The look is pure early-Aughts streamline, a curved metallic cradle that swings out to the left so the hatch can be lifted. The cost is at least partly justified by the fact that the carrier requires a modified bumper panel to accommodate the recessed mount points. It looks undeniably good on the Cayenne Turbo, with the words scrawled across the included cover in that iconic script. On other SUVs without the cover, the exposed alloy wheel is performative nonsense. But we must tip our hat to Porsche for having the courage to actually go there.

Options are now inherent to every Porsche model, with the vast majority of new buyers selecting around $20,000 in extras from the factory. At the Cayenne’s debut, though, things were a little different. With a starting price of $55,665, the Cayenne was one of the least expensive Porsches with a whole different market in mind. And even as those new buyers learned to climb the options tree, Porsche found that vanishingly few of them were springing for the rear-mounted spare tire. In 2006, four years into the Cayenne's run, Porsche cut the option—in the process severing the Cayenne's most visible link to the old world of actually-capable SUVs that, ironically, it helped usher out.

The option's short lifespan makes the rear-mounted spare Cayennes true rarities today. Of the 327 classifieds posted in the United States for the first-generation models on Autotrader, exactly one was outfitted with the rear-mounted spare. There's another for sale on FreeClassifieds.com. Our exhaustive eBay search turned up zero results for just the mount. But even if one found the part, a thread on Rennlist notes, cleanly adding it to a Cayenne would be extremely difficult given the exterior panel modifications and wiring integration required. It's no easy swap.

That said, first-generation Porsche Cayennes are becoming incredibly good used bargains. That Autotrader car with the rear-mounted spare is just over $10,000; the mileage is a little high, but still, there's no doubt that it'll be one of those oddities that Porsche freaks obsess over finding one day. The first-gen Cayenne will always be the one and only Porsche with a rear-mounted spare tire from the factory.

Actually, we've got a new class of vehicles this decade that could use some toughening up: The dreaded crossover coupe. Maybe Porsche should bring the option back on the Cayenne Coupe? Do it, Porsche. You know you have it in you.