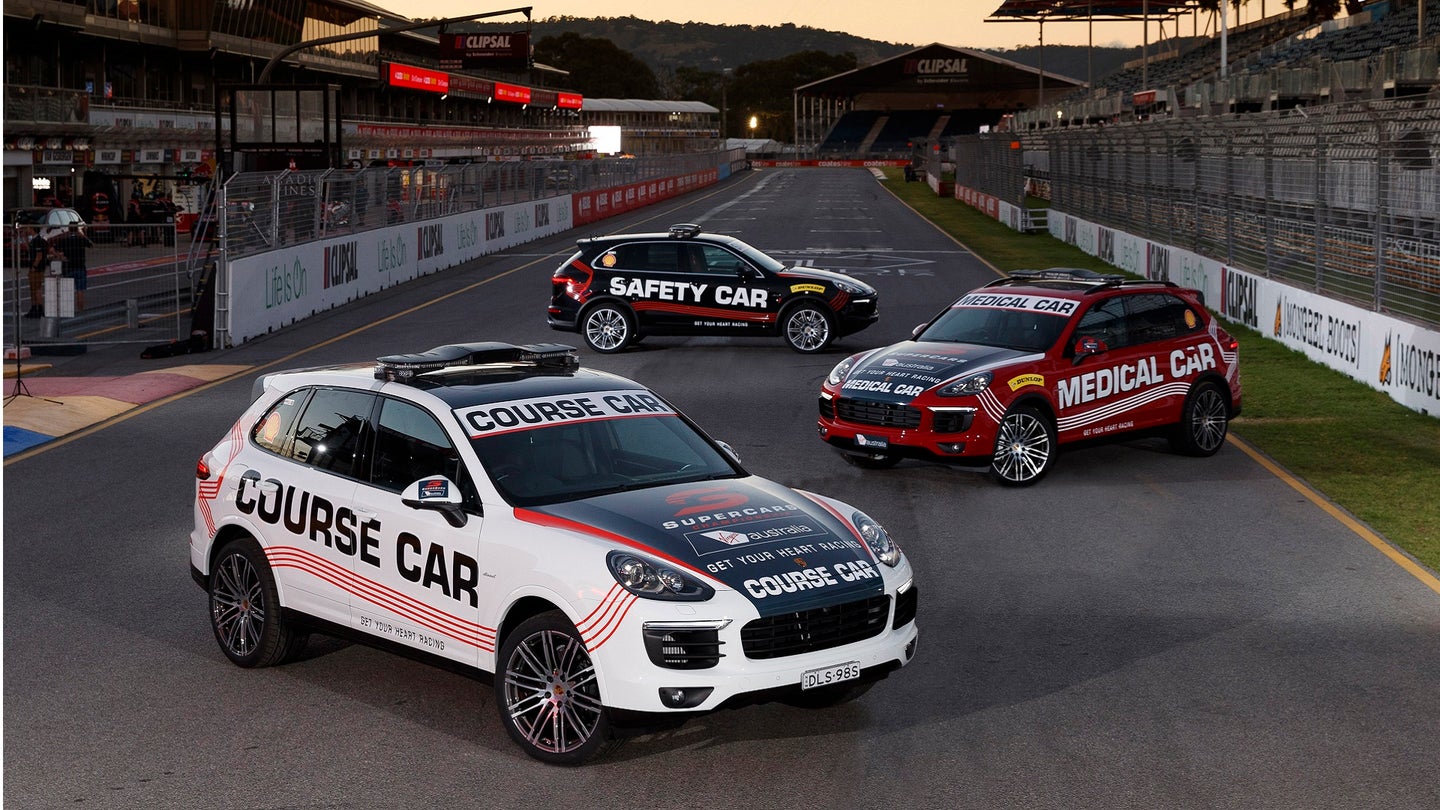 The Virgin Australian Supercars Championship begins this weekend with the Clipsal 500 weekend in Adelaide. As the drivers prepare to take the green flag this weekend, the clarks of the course will be relying upon Porsche Cars Australia and their trio of the Cayenne SUVs to make sure everything runs safely and securely this weekend. Porsche has supplied three Cayenne S Diesel models to be used as the Official Safety, Medical and Course Cars for the full 2017 season.

The Cayenne S Diesel's 4.2-litre V8 turbo diesel should have more than enough shove to keep the big SUVs circulating around the track in rapid fashion when they're needed. That big V8 engine produces 385 horsepower and a mega 627 lb-ft of torque. That's 283kW of power and 850Nm of torque in down under numbers. Of course, to make sure everyone looks flash and remains as comfortable as possible, Porsche has outfitted all three cars with the "Platinum Edition" package.

We sincerely hope that the Medical car will be the least used of the three, but knowing the Australian Supercars series as we do, we're positive the safety car will be used quite a bit throughout this 15-round 2017 season.

“We are proud to be able to lead the way for the Virgin Australia Supercars Championship with the supply of the series’ Safety Car, Medical Car and Course Car throughout 2017. All Porsches are at home on the race track and each of these Cayennes will be more than capable to fulfil the task at hand – and will no doubt put a smile on the face of those tasked with driving them.

“This partnership reaffirms the strength of the relationship between Porsche and the Supercars Championship. We are entering our 13th season of the Porsche Carrera Cup Australia championship, which continues as the primary support category of Supercars into 2017, while we have previously supplied the Medical Car with various Cayenne and Panamera models. We look forward to seeing these Cayenne models hit the track at the Clipsal 500 this weekend and well into the coming season.”

"We are proud and excited that Porsche has chosen to partner with Supercars for 2017 to showcase their high-performance range. We are absolutely delighted these ultra-high-performance vehicles will be an integral part of our championship in 2017."

In a somewhat embarrassing exchange of events, when the black Cayenne Safety Car was initially shown, it had the word "SAFETY" spelled incorrectly on the side livery as "SAFTEY". Somehow that typo made it through the PR person whose job it was to design the livery, the vinyl printer, the installer, the photographer, and the PR person whose job it was to upload the photo to Porsche Cars Australia's PR subsite (possibly the same PR person). Oh well, mistakes happen, but it's good to get a laugh out of them sometimes.