Driving a Jaguar in Trump's America

It's about to be a boon time for luxury cars. 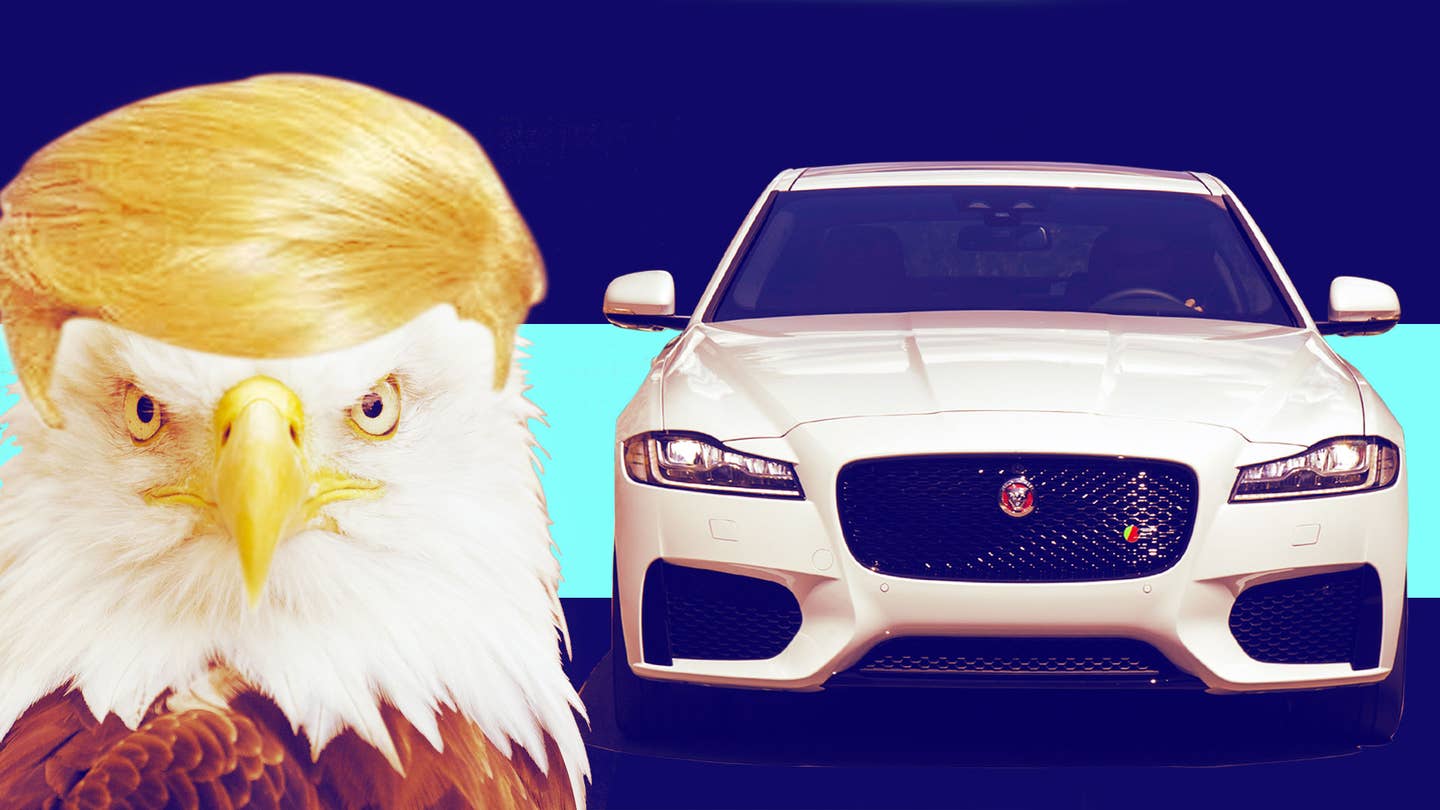 The morning after the election, in the dim dawn light, I walked out to my driveway in my stanky pajamas, deep bags under my eyes and in my soul, and removed the Hillary Clinton bumper sticker from my Prius. It folded away quickly, like my hopes had the night before.

After I saw my wife off to work and my son off to school and stared grimly at Twitter for 15 minutes, I went back to bed, preferably forever. An hour later, the phone rang. I shot up.

“I’m here with your Jaguar,” he said.

I threw on some pants and my Millennium Falcon T-shirt, and went to the front door. There stood a tall, handsome, bald African-American man, holding the keys to a luxury sports sedan.

“Looks like someone had a little trouble getting out of bed this morning,” he said.

To repeat: The first thing that happened after my political party lost the Presidency, dashing all my liberal fantasies of the last eight years, was that a black guy brought me a brand-new Jaguar XF-S valued at $77,085 and bearing New Jersey license plates. This was ironic in so many different ways that I can’t even begin to list them. Regardless, the sun rose on Wednesday, and they dropped off a car.

Since I started writing about cars five years ago, every week, someone has delivered me a different one to test drive. Sometimes the cars have been pretty ordinary, but they’ve always been new. A great number of them have been fancy. So I drive them around, feeling very fancy myself, even though in my actual life I own a 1998 Nissan Sentra with a cracked windshield and a house that I was only able to get because I won money on Jeopardy!

I drove the hell out of that XF-S all week. It was smooth and slick and awesome: A supercharged V6 engine with 380 horsepower, two-toned leather seats, the usual wonky entertainment tech that threatened my life with distraction, and excellent safety features. When I first started this gig, Jaguars were pretty sketchy, like lumbering, untrustworthy coffins. This one felt stylish as hell.

Jaguar has been busy pushing its image the last five years. It’s the car of the “British villain,” the ads say. But the villains in those ads are Thomas Hiddleston and Cillian Murphy. Now actual villains, not fey actors, stalk America, I thought as I took the Jaguar to Trader Joe’s and parked it alongside all the other Jaguars.

On Sunday morning, I drove the Jaguar to a birthday party that had devolved into a political grief brunch. We ate a Texas/Jewish mix of lox and bagels, Shipley’s donuts, and kolaches. There were lots of pastries—so many, in fact, that people were complaining there should have been fewer. We talked pessimistically, except for when it came to marijuana, about which we talked with cautious optimism.

Afterward, I walked out to my car. A guy I’d met a couple of times, who was parked behind me, yelled out his window.

“Jersey plates,” he said. “Wish I could afford that.”

He was in a Honda Pilot.

“And how many kids do you have?”

“That’s why you drive a Honda Pilot,” he said. “I’ve driven those too, they’re nice.”

“Whatever,” he huffed, and he sped off to a Leonard Peltier fundraiser.

So my week progressed, grimly but luxuriantly. I drove the Jaguar to the post office and the bank and the library and through the drive-through at P. Terry’s after I took my kid to the eye doctor, all the while keeping a wary watch for swastikas. Like a Jewish Batman, I cruised the streets searching for racial violence. I saw none specifically, though I did see a white pickup truck flying an American flag. It had “Infowars.com” written on the rear window, making it a literal white power-mobile. “Free speech,” I muttered to myself. And then it was back home to my butler-less cave, to witness the apocalypse unfolding and also to work on my fantasy sports portfolio.

Whatever you think of president-elect Trump, whoever you voted for, you must agree that these will be boon years for Jaguar, and other luxury brands, except for Lincoln, which is always hopeless no matter who’s in the Oval Office. The cars will get nicer and nicer as their clients get richer. A thousand dollars will be a cheap starter watch, and an Acura will be a junker for kid number three.

By now, they will have taken the Jaguar away, and replaced it with a Nissan Pathfinder, which is also a car. It will probably come in handy when I go to pick up mulch at Lowe’s this weekend. As my luxury week in hell ended, it occurred to me: they were going to drop off the car no matter who won.

But if it had gone the other way, I probably would have kept the sticker on my Prius.