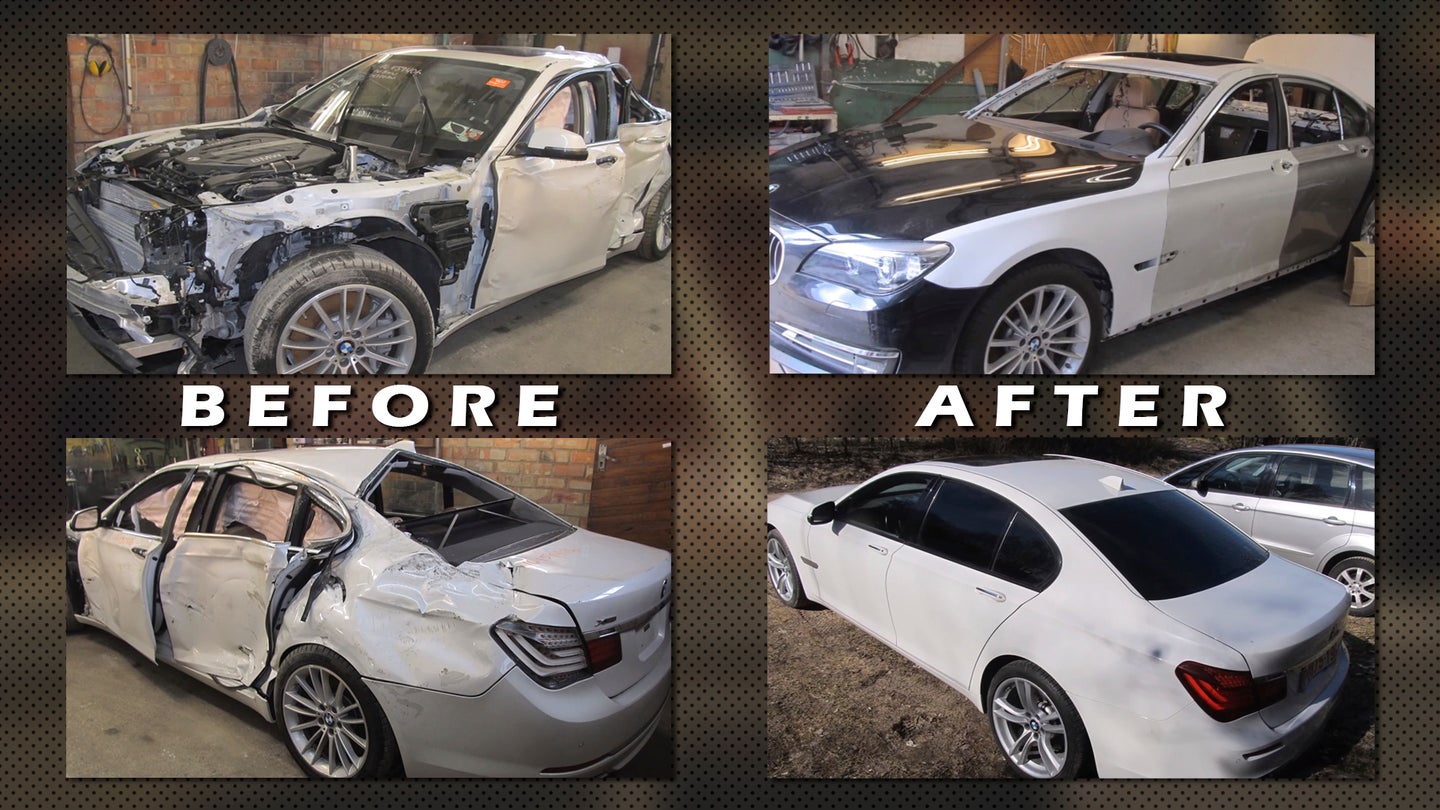 The magic of body work can hide almost anything on a car, as we've shown you before. That's why it's always so important to get a full vehicle history when buying a used car, and unless you know what you're getting into, avoid salvage auctions altogether. But whatever you think of the roadworthiness of once-wrecked cars, it's undeniable that watching this Russian man basically disassemble an obliterated BMW 7-Series F01 and repair some serious cosmetic and structural damage is very impressive. And, oddly meditative.

Body work is an inexact science, as anyone who's ever popped out a fender dent can attest, but doing it correctly on this kind of scale requires equal parts strength, technique, knowledge, and artistic skill. It goes beyond just knowing how to take a car apart, hammer out the damaged sections, and put everything back together again correctly—though that last bit can't be understated. As the video shows, it takes countless hours of painstaking measurements, minuscule adjustments, and an understanding of just how far a piece of metal can be pushed or pulled before it breaks.

It looks like this BMW 7-Series was the unfortunate victim of a rollover crash, with severe body damage all along the driver's side, and especially on the roof line, rear quarter panel, and front end. After removing the interior, body work master Arthur Tussik gets down to the long, tedious business of pulling, pushing, tugging, chopping, hammering, welding, and/or straightening every damaged piece of metal. Tedious for him, at least. For us, watching all this happen in a timelapse format with some video-game-menu music is a pretty relaxing way to spend 15 minutes.

After 15 days of metal work, the car is essentially fixed and ready to be repainted and finished, a process that Tussik says took another 12 days. So for those playing along at home, that's a little under a month to go from scrapyard star to a like-new BMW with a secret past.

And that's where we can't get on board with driving something like this ourselves—this 7-Series had some very extensive structural damage, including two bent frame rails. Tussik is definitely thorough and precise, but you can only chop up and re-weld a unibody so many times before its strength is dangerously compromised. Considering the acres of metal he had to straighten out, would you really be surprised to find there are at least a few areas that aren't nearly as strong as they were before the wreck?

In the United States, there's no question this car would have been totaled, though that's more a function of our labor costs than a shop's willingness to tackle something like this. And even if you think its borderline irresponsible to do this repair, you have to admit—the man's got skills.

The body shop claims the insurance company bullied them into performing a cheaper repair.