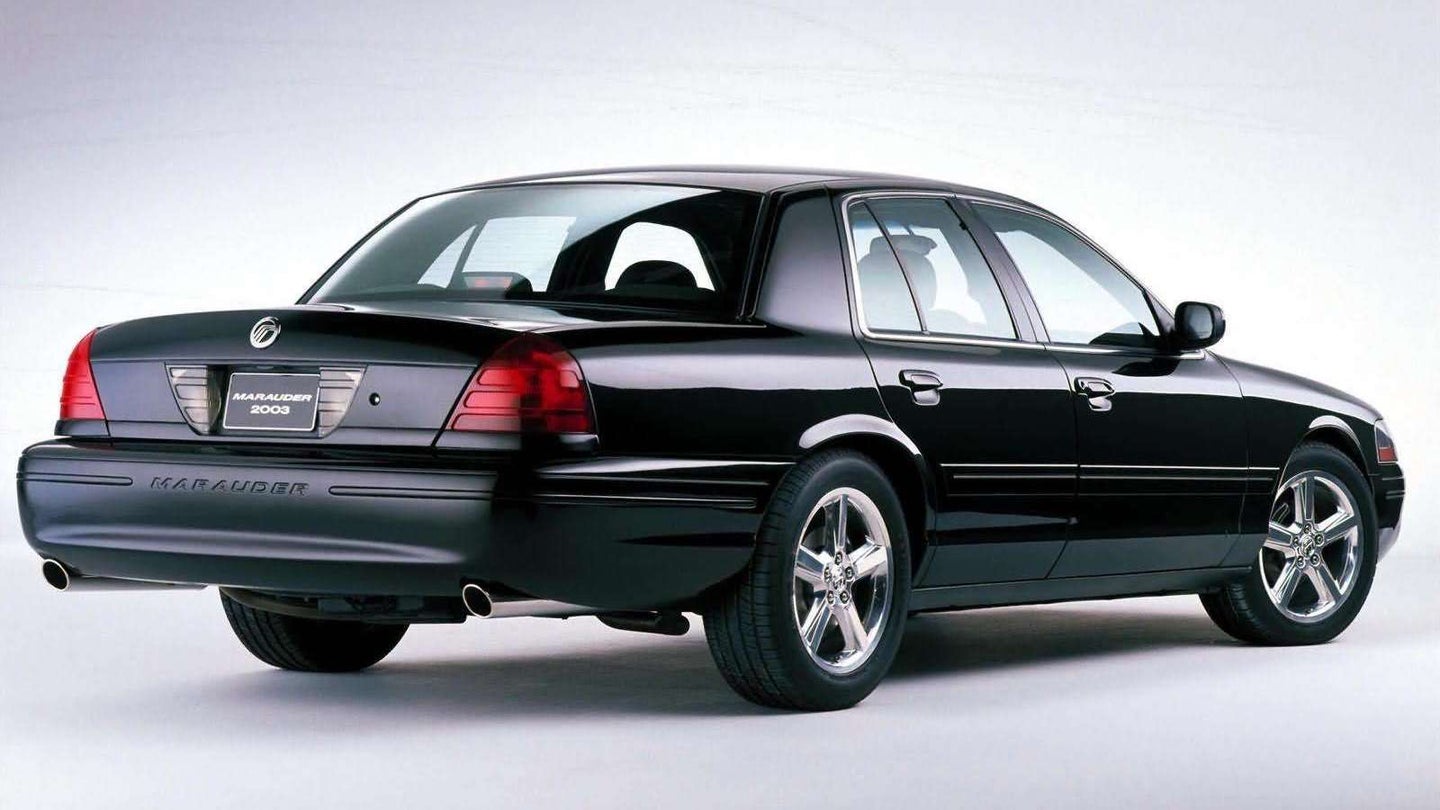 We all have something we'd like to forget about the 2000s, be it an emo phase, a failed relationship, or the build quality of the Chrysler Sebring.

At first blush, the Aughts wasn't a time to remember for patrons of the American auto industry. Ford and Firestone kicked off the era with the Explorer tire blowout debacle. Chrysler tried to bed with Daimler and Mitsubishi before winding up alone and bankrupt at the end of the decade, mired in the Great Recession. General Motors followed in Chrysler's footsteps barely a month later, but not before unleashing the Hummer H2 upon the world. In between, there was a whole lot of badge-engineered blandness.

The Big Three didn't just produce gimcrack like the Sebring; there were also cars like the Dodge Viper, Ford GT, and Pontiac G8 GXP, among other standounts. By this point, though, we've heard all there is to hear about the GT and its ilk. They're fast, they look terrific, and because neither you nor I own pharmaceutical stocks, we can't afford them. But fortunately for us mortals, Ford, GM, and Chrysler all made cars that are no less interesting than those listed above, but but don't (yet?) warrant individual press releases when they come up for sale.

Behold, these are the top 10 under-appreciated American cars from the 2000s. To qualify, a vehicle must have been introduced between 2000 and 2009 and be noteworthy in at least two ways, either through its historical significance, distinctive styling, cultural importance, and of course, performance. If it can make a teenager of 2039 say to themselves "Hey, neat,"—or whatever the future equivalent of the word will be—it fits.

Editor's Note: The Drive does not recommend treating this list as investment advice, because no one ever made money buying a PT Cruiser.

A controversial way to kick off the list, but the Chrysler PT Cruiser is simply too noteworthy to become anything other than a future classic. Chrysler sold over a million of these these quaint, polarizing hatchbacks and their convertible derivatives, which were legally classified as trucks to raise Chrysler's CAFE ratings. Available 2.4-liter turbo engines like those in the Dodge Neon SRT-4 were available on the GT and Limited trims, which also makes them an underutilized and underrated foundation for drag builds.

Hummer as a brand existed to milk American jingoism; to sell trucks to people who believed President Bush when he proclaimed the Mission to be Accomplished. They were big and brash in a way we liked... until our opinion of the Iraq occupation soured, gas prices went up, and the economy cratered, making us realize the foibles of conspicuous consumption. America turned on Hummer, the end result being its mercy-kill by GM.

As the smallest Hummer, the H3 was the least loathsome model in the doomed marque's lineup, and avoided much of the ire rightfully directed at the embarrassing H2. Yeah, it's technically a Chevy Colorado underneath, but that means parts will be available well into the 2290s. Plus, its selection of engines were on the odd side. Entry-level models got inline-five weirdness, while the desirable Alpha trim got 5.3-liter "Vortec" V8s. As of yet, you still can't get that many cylinders in the H3T's modern lookalike, the Jeep Gladiator.

Is it a hatchback? An early crossover? Regardless of body style, it deserves the prefix hot because of its turbocharged, 2.4-liter four-popper—not the one seen in the PT Cruiser GT and Neon SRT-4. Dodge said this 2.4 made a not-inconsiderable 285 horsepower and 265 pound-feet of torque at the crank, but was accused of understating the car's actual power output, with Edmunds recording approximately those numbers at the wheels.

So it's quick, but what about those looks? It's definitely 2000s Dodge—not everyone's can of Arizona. Despite that, its design manages angularity without getting too busy, a trick which stylists have since forgotten. There will come a time when you'll see a Caliber SRT-4 and think, for one reason or another, "Wow," even if it's followed by "I wonder if the windows still work."

According to its formula, the Cadillac XLR should be a travesty of a car. Technically a C5 Corvette underneath, it's yet another case of GM gluing a Cadillac badge to a Chevrolet product, but that doesn't mean you get the fabled LS V8. Nope, the XLR came with the Northstar V8—infamous for head gasket failure—linked only to an automatic transmission.

Yet the XLR is redeemed in part by superb lines, which never came through in photos. Were 101 Dalmatians remade circa 2006, Cruella De Vil would've driven a black Cadillac XLR-V, because in person, these cars are sinister. They're broad, low, polygonal, and obscure enough that most people have to ask what they're looking at when one rolls past. Only 15,460 XLRs were ever made, and even fewer were built to XLR-V spec, which utilized a 4.4-liter, supercharged version of the Northstar V8. That motor made 443 horsepower and 414 pound-feet of torque, and allowed the XLR-V to hit 60 from a standstill in 4.6 seconds. Make no mistake: that's still quick in 2019.

You're looking at America's last true muscle wagon: the Dodge Magnum. After a much-needed late-cycle facelift, the Magnum longbottomed into a handsome family car. It had the space to satisfy pragmatic parents and the grunt to stave off a midlife crisis, with a 340-horsepower, 5.7-liter Hemi V8 available on the R/T trim, and optional all-wheel-drive after 2005.

Most desirable of the Magnums was the SRT-8, its 6.1-liter V8 producing 425 horsepower, good for a zip-to-60 in five-ish seconds, and a quarter mile in the low 13s. Dodge built just 4,129 Magnum SRT8s before the model's discontinuation, so act now while Americans are sleeping on this sleeper.

It took GM until late 2004 to build what the Chevrolet Cavalier Z24 always should have been: the Cobalt SS. This bid for the tuner market was built lamentably, but its supercharged two-liter made up for its shortcomings with 205 horsepower and 200 pound-feet of torque. Those numbers climbed to 241 and 218 respectively with a GM-approved "stage two" upgrade kit, which didn't violate the car's warranty and produced a hilarious amount of supercharger whine to boot.

Yet for all the supercharged Cobalt SS had to offer, it paled in comparison to the later, Ecotec-powered turbo version, introduced in early 2008 at the onset of the Great Recession. That car whipped up 260 horsepower and an equal amount of torque, or with its own approved "stage two" upgrade, up to 290 horse and 340 torque. It wasn't just a front-axle smoker either—its handling allowed it to set a front-wheel-drive lap record at Virginia International Raceway that wasn't broken until the new Honda Civic Type R came along.

Sadly, the Cobalt SS's reputation has meant that good examples are already something of a rarity, and GM never issued the model's best powertrains to the its badge-engineered brothers, the Saturn Ion Redline and Pontiac G5 GT. At least Saturn's car got the supercharged engine—Pontiac's was naturally-aspirated-only.

The Saturn Sky was one of two front-engined, rear-drive roadsters built on GM's Corvette-lite "Kappa" platform, the other being the Pontiac Solstice. Despite resembling a creature from the deep, the Pontiac proved the better seller, and the Saturn Sky faded into obscurity. It was a strange fate for a sports car with looks this sharp, and if media was to be believed, a driving experience to match. Reviewers likened the Sky to the Corvette more often than they compared it to the Mazda Miata, and that was before the Sky Redline arrived on the scene.

Like the above Cobalt, the Sky Redline had GM's Ecotec turbo engine, which, if you remember, was one warranty-compliant upgrade kit from 290 horsepower and 340 pound-feet of torque. Performance like that and looks like these should make the Sky one of the most-desired American cars of the 2000s, but don't pounce on them just yet. Wait until these white whales dip under five figures... even if that date is another several years out.

Chrysler was the first to prove that America could play along with the F&F-rooted tuner craze of the early 2000s with the Dodge Neon SRT-4. Product planners weren't sure if the car's boy-racer styling and a turbocharged 2.4-liter engine would bait the kind of person who quoted Paul Walker and Vin Diesel, but Dodge was rewarded with tremendous demand for the short-lived sport compact. Across just three model years, the SRT-4 sold 25,303 units, of which 1,175 were the track-focused SRT-4 ACR.

Fortunately for SRT-4 buyers, the car wasn't just show-sans-go. As with the later Caliber SRT-4, Dodge was accused of understating the Neon SRT-4's power output, which it claimed to be 230 horsepower and 250 pound-feet of torque, and which independent testers found to be as high as 265 horsepower and 270 torque at the crank. Just as planned, tuners ate up this Dodge, and have since regurgitated Neons that can run standing quarter miles in under nine seconds.

To cook up the Marauder, Ford followed a recipe that called for the best cuts of the Mercury Grand Marquis, Ford Crown Victoria Police Interceptor, and Ford Mustang Mach 1, and the resulting hot dog spoke for itself. Its all-aluminum, DOHC V8 served up interstates for breakfast, lunch, and dinner, and the comfort of its leather interior could keep you hungry for that asphalt all day. And come time to take the offramp at full send, it doesn't handle like a cat that hates being picked up, courtesy of what Elwood Blues would call "cop suspension."

Mercury made barely 11,000 Marauders, the ultimate Panther body, and they're rarely seen on the market. It's almost like owners don't want to get rid of them for some reason.

For all the Panther body's success, it didn't mark mainstream America's final fling with the full-size, rear-wheel-drive sedan. That honor belongs to the Chrysler 300, which achieved popularity we haven't seen from an American car in this segment since.

Drake wasn't wrong when he said there was some Bentley about the 300, but that's secretly one of the reasons Americans liked this kitschy Chrysler. The fact that it was spacious, well-equipped, and comfortable didn't hurt sales, nor did its available powertrains, which ranged from small V6s to barrel-chested Hemi V8s. Of the two V8 trims, the 5.7-liter 300C is more common, its 340 horsepower (360 on later models) and 390 pound-feet of torque making it a capable onramp thriller. More desired still was the 300C SRT-8, whose V8 swelled to 6.1 liters and output grew to 425 horsepower and 420 pound-feet of torque. Even though it weighed the better part of two tons, a good launch could get the SRT-8 from a standstill to 60 in a hair under five seconds.

The Chrysler 300 would deserve a spot on this list even without its mainstream appeal, but because it was a coast-to-coast hit with all walks of life in addition to being a fine automobile, the 300's spot at number one is more than justified. We can only wish America hadn't fallen out of love with the 300—word is it's not long for this world.