2017 BMW Alpina B7 Review: Big Sedans Aren't Supposed to Perform Like This 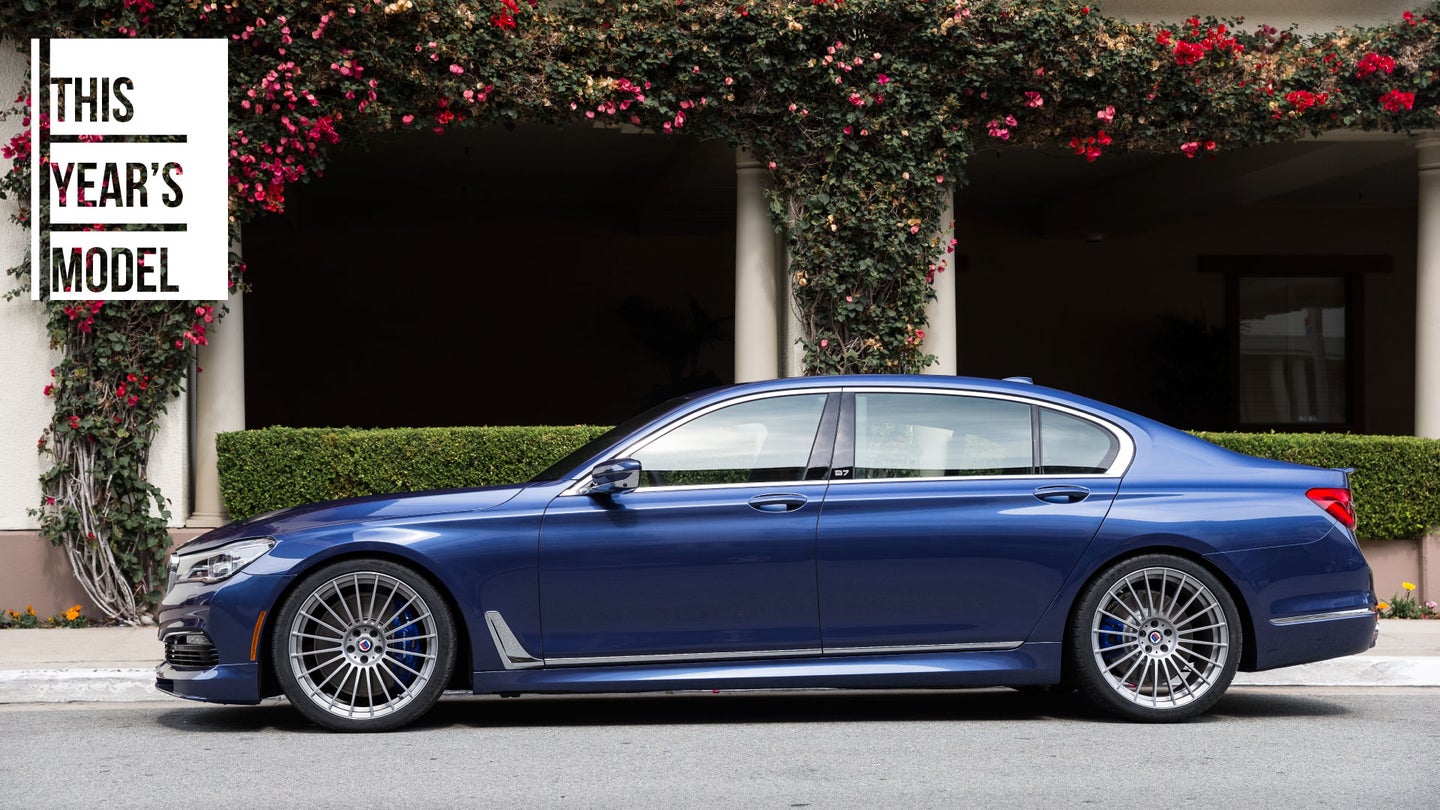 Decisions are hard for the BMW 7 Series shopper, at least for those who seek extra explosiveness. Hmm, perhaps the M760i xDrive, with the same twin-turbo, 6.6-liter V12 that burbles in the palatial Rolls-Royce Ghost, Wraith, and Dawn? Those are some snooty bragging rights, a German-British alliance that’s a kind of Dunkirk in reverse.

Ah, but what about the 2017 Alpina B7? In an unusual coincidence, the Alpina serves up 600 horsepower and 590 pound-feet of torque, versus a near-identical 601 and 590 for the M760i. That alone might throw a gold-plated monkey wrench into your decision-making. Yet the Alpina generates that Texas-sized thundering herd with an engine that’s 33-percent smaller, based on the twin-turbo, 4.4-liter V8 that powers the civilian-issue BMW 750i. Alpina reworks the twin-scroll turbos and intercoolers; adds a high-flow air intake system, Mahle pistons and NGK spark plugs; and dials compression and boost to a respective 10:1 and 20 psi. A stainless steel Alpina sport exhaust system cuts backpressure and sends more V8 growl through classy, twin elliptical exhaust outlets set flush into the rear apron.

The result is one of the world’s swiftest sedans in the heavyweight division, with a boggling 193-mile-per-hour limited top speed. (European-market models can soar to an improbable 205 mph, faster than some supercars.) The Alpina’s uncanny handling and AWD stability, aided by a dual-axle air suspension, active rear-wheel steering and lift-reducing bodywork, makes it especially tempting for autobahn rockers, or Americans with a trusty radar detector.  Oh, and if you’re fond of blue, you’ll love the Alpina Blue metallic paint, the company’s signature color (along with Alpina Green) that’s verboten on standard BMWs.

For the uninitiated, Alpina Burkhard Bovensiepen KG is a tuning company in Buchloe, Germany, just west of Munich, which was begun in 1965. Its founder Bovensiepen, whose name is etched into a metal production plaque on the B7’s glossy wood console, expanded the family’s Alpina typewriter business by adding capital-H “Horsepower” to BMWs, beginning with a twin Weber carburetor set-up for the BMW 1500. Bovensiepen’s finely engineered cars soon captured the attention of BMW itself. The company itself cites the B6 2.8 of 1978 as the first official, full-on BMW Alpina—a 328i powered by a 200-hp version of the inline six from a larger 528i.

Unlike Mercedes-Benz’s more-famous AMG, which was steadily absorbed into the company, Alpina remains entirely independent of BMW. Yet it’s a highly symbiotic relationship: Models like the B7 are built on the same assembly lines that produce standard BMW models, before heading to Buchloe for finishing touches. Just as importantly, BMW has bestowed factory warranties on Alpinas since the Sixties.

I visited Alpina’s countryside factory a few years back, a tour that included an awestruck tour of its wine cellar; Alpina also ranks among Germany’s biggest importers of top-shelf Italian and California wines. I left with a magnum-sized Sangiovese reserve, and proceeded to shake it up on the autobahn while sampling some of Alpina’s boldly-flavored models.

In contrast, the streets of Brooklyn and the twisties of upstate New York could barely contain the B7, though I broke the shackles whenever possible. Stealth and subtlety are Alpina hallmarks, and many European buyers prefer to remove the Alpina’s badges and metallic brightwork to fly even further below the radar. But to me there's no need to disguise this big Bavarian. For all its power and luxury, this isn't some overwrought Schwarzenegger, flexing its oiled biceps and leering at the maid. Instead, the Alpina exudes class, breeding and grown-up manners. And it drives like a midsize sport sedan—a more comfortable M5 if you will—trapped in the 204-inch, 4,800-pound body of a 7 Series.

Alpina adds a touch of welcome heft to the 7 Series’s steering, negotiated through a hand-finished, blue-and-green stitched steering wheel covered with Lavalina leather. The xDrive AWD system is modified for better agility, including a stronger rear bias in the DTC mode of dynamic stability control. The B7’s body hunkers down by 0.8 inches when speeds climb beyond 140 mph, and drivers can manually select that performance yoga pose—the Downward Deutsche?—via the Sport Plus setting.

Even on its lovely, 21-inch Alpina Classic wheels (20s are standard), the Alpina butters the road virtually as well as a Mercedes S-Class, especially in its Comfort setting. Things get a mite choppy in Sport Plus mode on battered pavement, but there’s rarely a need to tense the BMW’s muscles in such coarse fashion. And even versus Mercedes’s own full-size hot rod, the 577-horsepower Mercedes-AMG S63, the Alpina is faster throughout its surreal powerband, and gobbles corners with more gusto. Throttle response is thrillingly immediate: At 2,000 rpm, there’s already 494 pound-feet of torque, with the peak of 590 arriving at 3,000 rpm and holding steady to 5,000 rpm. (The M760i’s V12 hits peak torque even sooner, at 1,500 rpm).

Alpina tweaks software for the eight-speed automatic transmission as well, its shifts nearly imperceptible in mellower driving modes; the company also replaces the shift paddles with somewhat awkward buttons on the back of the steering wheel. (Customers can request familiar 7 Series paddles instead). Drivers can also toggle BMW’s fussy, wand-shaped console shifter, despite its long and somewhat disconnected throws. Fuel economy is atrocious, naturally, briefly nosing over 20 mpg during rare moments of relaxation, but plummeting as low as 12 mpg when I spurred the car like a demented jockey riding a Clydesdale.

BMW’s estimate of a launch-controlled, 3.6-second dash to 60 mph actually appears conservative—but even that sandbagging figure is a half-second quicker than an S63, which does it in a claimed 4.1 seconds. The Benz tops out at a "mere" 186 mph. The Bentley Flying Spur, whose nearly $192,000 base price outstrips the Bimmer by $55,000, is another large-bore sedan that doesn’t have a prayer against the Alpina, whether in a straight line or a backroad hustle.

Fortunately, you don’t need to seek six-figure drag races to be bowled over by the B7 (though it certainly helps). Inside, it’s the familiar long-wheelbase, leg-stretching 7 Series—now fully competitive in luxury with Mercedes and Audi in size—built on a solid chassis that combines aluminum stampings with steel and a backbone of carbon fiber.

Considering the B7’s $137,995 base price, dropping $4,000 on an optional cabin wrapped in Merino leather—like my tester’s gorgeously coffee-colored, diamond-stitched hides—will be like flipping a quarter at the salesman. That “Tartufo” mocha leather made for a smooth morning blend in conjunction with the “smoke brown” eucalyptus wood. Standard stuff ranges from soft-closing doors and four-zone climate control to heated and massaging seats front and rear. Options ranged from perfumed “ambient air” to a sparkling Bowers & Wilkins audio system and infrared night vision.

BMW’s industry-first Gesture Control reliably impressed my passengers—its functions include twirling a finger in the air to raise or lower audio volume—though this particular unit didn’t always respond on the first try. And in this tech-stuffed limo, the lane-departure control seemed to switch itself on in mysterious fashion, until I canceled it entirely using the iDrive menu on the center screen.

In a company first, Alpina has designed its own instrument panel gauges for this Bimmer. The B7’s animated speedometer and tachometer could be reference points for companies who want digital gauges that are rich and contemporary but not overdone. I thought of Aston Martin in particular, whose driver’s display in the new DB11 is comparatively humdrum. Press the BMW’s dashboard’s engine start button, and the twin orbs glow like big blue sapphires around bright red needles. Touch a console button to summon Sport or Sport Plus modes, and the gauges blacken and add a digital speedo, with green animation tracing the speed and engine revs. Every passenger in the Alpina, unbidden, was moved to comment on the snazzy display.

I’m looking forward to testing the M760i version in September. But a few people I trust who’ve driven both models say they definitely prefer the Alpina, citing the waterfall rush of its V8, the lighter weight of engine and vehicle, and its peerless balance of ride and handling. The M760i also carries a nearly $20,000 handicap—a $156,495 base price, versus the B7’s aforementioned $137,995. Even lavished with options to reach $153,645, my Alpina still undercut a base-model M760i.

I’ll reserve judgment until I drive the M760i and report back. Perhaps I’ll succumb to its 12-cylinder charms. But for well-heeled types who drive the B7 first and nearly snap a wrist reaching for the checkbook, I don’t foresee much second-guessing: It’s hard to imagine a luxury sedan that’s fuller, or more fully satisfying, than the B7 Alpina.