The 2018 BMW 640i xDrive Gran Turismo: Still No Beauty, But Hauls Like a Beast

If you're down with the Humpty Dumpty style, BMW's whatchamacalit—hatchback, crossover, demi-wagon—is one practical egg. 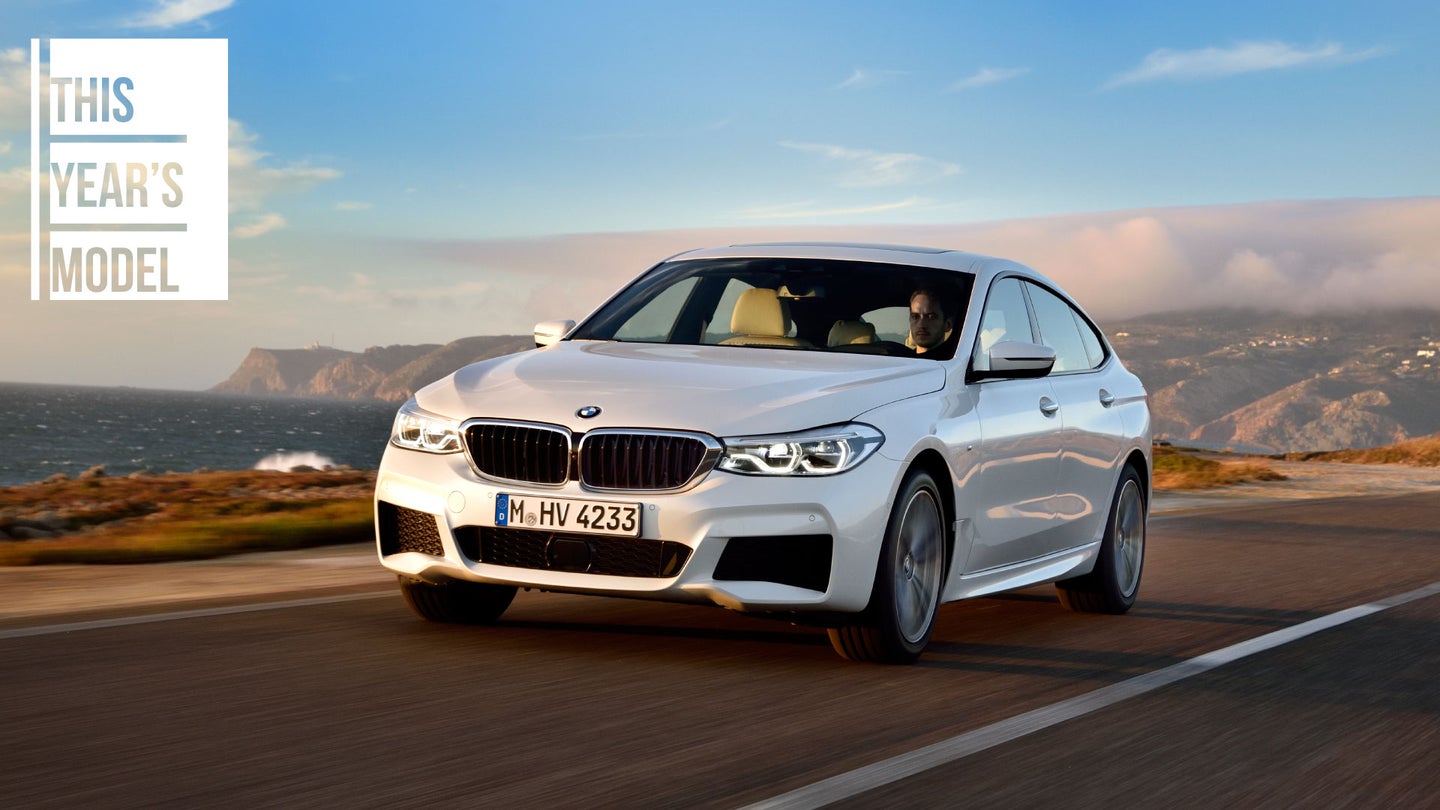 There’s one upside to owning a car that won’t win a beauty contest: You never have to look at it while you’re driving. So meet BMW’s Miss Congeniality: the 2018 640i xDrive Gran Turismo.

Kidding aside, it looks altogether better than BMW’s previous, murderous stabs at a sedan-based hatchback, the 3 Series and 5 Series GTs. It’s largely a deluxe re-do of the 5 GT, upgraded to the lightened platform that supports the latest 5 and 7 Series sedans. That includes an easy-access seating position that’s 2.4 inches higher than a 5 Series.

But this car’s formerly gawky roofline is nearly an inch lower, its wheelbase stretched to a generous 120.9 inches. The previous car's notoriously bulging tail—recalling a well-fertilized turnip, or perhaps a baboon’s jaunty hindquarters—is also decisively lowered, and flows more naturally from the car’s midsection. A new, retractable rear spoiler does its own part to adjust both aerodynamics and visual proportions. Up front, you’ll find BMW's Active Kidney Grille system with movable aero shutters, along with Air Curtains and Air Breathers along the sides.

So why, you ask, is BMW calling it a 6 Series, a numeral that has traditionally described a two-door coupe and convertible? Well, BMW is adding two to six, which equals the revived, eye-popping 8-Series as its top-drawer coupe. And like Audi before it (with the four-door, slope-roofed A7 versus an A6 sedan), BMW now envisions a 6 as one better than a 5—and naturally, more expensive.

If your chalkboard and checkbook can accept all that, the 6 Series GT does have some German math in its favor: This sucker is huge, airy and rich inside, and immensely practical. Stretching 201 inches, it’s a significant 6.3 inches longer than a 5 Series sedan, and just 5.7 inches shorter than a flagship 7-Series.

And after logging a swift, effortless 800 miles on a Thanksgiving trip from Brooklyn to Maine—including one 400-mile leg in six hours flat—I made a pilgrim’s peace with this car. Think of the 6 Series GT not as a traditional BMW sedan, but as a wagon-sized, performance alternative to a luxury SUV, and that caboose starts making sense. This BMW, in fact, is more spacious than either BMW’s X3 SUV, the 5 Series station wagon that’s not sold in the States, or Volvo’s V90 Cross Country wagon.

That's true no matter which measurement you plug in: Rear-seat legroom, cargo space behind rear seats, or maximum storage with seats folded. In some cases, the advantages are of the crushing variety: This 640i packs 31 cubic feet of storage space into an especially wide, deep and tall space; and 65 cubic feet when you drop the rear seats, split 40/20/40. Remarkably, the BMW will fit 50 percent more cargo behind its rear seats than Volvo’s largest V90 wagon, and 20 percent more with all seats folded. (The Volvo fits just 19.7 cubic feet behind rear seats, or a maximum 54 cubes).

A hulking Mercedes E-Class wagon can fit a touch more behind its seats, at 35 cubic feet, but its seat-down stowage of 57 cubes still trails the Bimmer by about 15 percent. The BMW's behind-the-seats capacity is also 25 percent more than the Audi A7’s vaunted hatch, and the BMW's back seat is also comparatively limo-like, with a 3.5-inch edge in legroom (at 40.4 inches) and two inches more head space. Smartly, BMW has eliminated the superfluous vertical divider that separated the back seat from the hatch in the 3 and 5 Series GTs, which seemed designed solely to convince owners that they weren’t really driving a hatchback.

Rear-seat accommodations themselves aren’t far off the 7 Series standard, including heated reclining seats with pillowy leather inserts on headrests and an available pair of entertainment screens. My version, starting at $70,695, was replete with lovely gray-stitched cognac leather, rich wood trim, a panoramic moonroof, and such optional niceties as soft-closing doors, remote-control parking and black ceramic-coated switches. The once-reviled iDrive system, whose rotary-dial controlled center screen has spawned seemingly a hundred imitators, has steadily evolved into one of the most hassle-free infotainment units—now in its 6.0 version with a 10.25-in touchscreen. BMW’s latest head-up display is another winner, with a sharply rendered pixel count of 480 x 800. Its 75-percent-larger viewing area showed me especially informative nav directions that went well beyond the usual turn arrows hovering in the driver’s view.

In Portland, Maine, I brought some extra family luggage aboard to clear space in my brother-in-law’s rental Infiniti SUV. The BMW swallowed three good-sized roller bags, and easily had room for two more, without even removing the hatchback cargo cover or storing stuff on top of it. That’s five roller bags behind the rear seats, leaving genuine room for five adult passengers. Standard xDrive AWD gives the BMW some winter cred as well—though the lack of a rear-drive option shows how BMW sees this as a niche car in its vast American lineup. (In Europe, the 6 GT is available with rear wheel drive and more engine choices, including a turbo four and a diesel six). That AWD system came in handy on pre-dawn, Maine coastal roads that suddenly slicked over with ice. And when I saw how much grip I had on tap from 19-inch all-season Pirellis on M alloy wheels (with 20- and even 21-inchers available), the relatively low-slung 6 Series made clear that it could outperform a long list of luxury SUVs.

Despite the model’s expanded dimensions, the lighter chassis helps hold weight to just over 4,400 pounds—about 250 more than a 540i sedan with xDrive, and 80 fewer than the departed 5 Series GT. Power comes from an old, smooth-talking friend: BMW’s 3.0-liter turbocharged inline-six, with 335 horsepower and 332 pound-feet of torque. This engine remains a six-cylinder benchmark for overachieving, free-revving power. Equally trusty is the eight-speed Steptronic paddle-shifted automatic transmission. This 640i GT glides from stoplight to 60 mph in a BMW-claimed 5.1 seconds, but it felt even quicker. Top speed is limited to 130 mph, due to those all-season tires.

Volvo's Cross Country wagon—Miss Sweden with its fine Scandinavian bone structure—may beat the Bimmer in the beauty pageant, but the BMW whips the Volvo in the talent competition. The Bimmer is a good half-second quicker to 60 mph, and its ride is silkier and better-controlled. The 6 Series delivers a clear edge in agile handling, especially with the $4,100 Dynamic Handling package, which adds a dual-axle air suspension, ratio-adjusting integral active steering, active roll stabilization and driver-adjustable dynamic dampers. Switching to Sport, Eco or standard driving modes also reconfigures handsome gauges, including a clever visual demarcation that shows how much you’re exceeding the posted speed limit.

That optional package also adds a Comfort + mode for maximum creaminess, and an Adaptive mode that automates vehicle responses—including using the navigation system to prep for upcoming curves and intersections. The air suspension lets a driver raise the ride height by 0.78 inches at the touch of a button, with the BMW automatically lowering by 0.39 inches when it tops 75 mph in Sport mode. And unlike Volvo’s combination turbocharged/supercharged four-banger, BMW’s stellar inline-six never sounds stressed when you mat the gas, thanks in part to torque that peaks and holds flat anywhere between 1,380 and 5,200 rpm. Again, this big ’un is no M3 in performance, but the 640i GT is competent when pushed to extremes.

One bit of incompetence is BMW’s insistence that its Intelligent Drive systems—encompassing lane-departure warnings, blind-spot assistance, and other computer aids—wake themselves every time you press the ignition switch. That forces you to hold down a switch for three long seconds to dismiss the nannies; at least the green-ringed button is smack in the middle of the dashboard, because you’ll be using it, often. That nanny list is longer than a Park Avenue matron’s. The Active Driving Assistant suite, now standard, includes active blind spot detection, lane departure warning, daytime pedestrian protection, frontal collision warning with city collision mitigation, automated speed limit info and rear cross-traffic alert.

Not enough? My tester’s optional, $1,700 Driving Assistance Plus Package added active cruise control with stop and go, an active lane keeping assistant with side collision avoidance, a semi-autonomous traffic jam assistant, evasion aid, and a front cross-traffic alert. That adaptive cruise unit can now automatically resume forward progress up to 30 seconds after a full stop, a nice feature in grinding stop-and-go traffic.

Now, if turning heads is a top priority, you're better off with the four-door, 6 Series Gran Coupe, one of the prettiest cars in today’s BMW showrooms. But that 6 Series has a back seat on par with many compact sedans, and a modest trunk. In the same stylish vein, don't even look crossways at an Audi A7, or you may fall in love and never look back. The A7, as it segues into its second generation, is a textbook example—or perhaps an illuminated manuscript, from some German monks of car design—of how to combine style with practicality. Yet even the Audi isn't as practical as the Bimmer, whether for people or stuff.

America's steamy love affair with SUVs, and its blasé attitude toward most wagons and hatchbacks, will likely make the 640i GT a relatively rare sight. Yet there's no denying its impressive skill set. And if we're talking models with comparable skills, let's be honest: Are most SUVs all that good looking?