Built to haul your favorite BMW motorcycle, this oddball pickup is the brainchild of the company’s silliest minds. 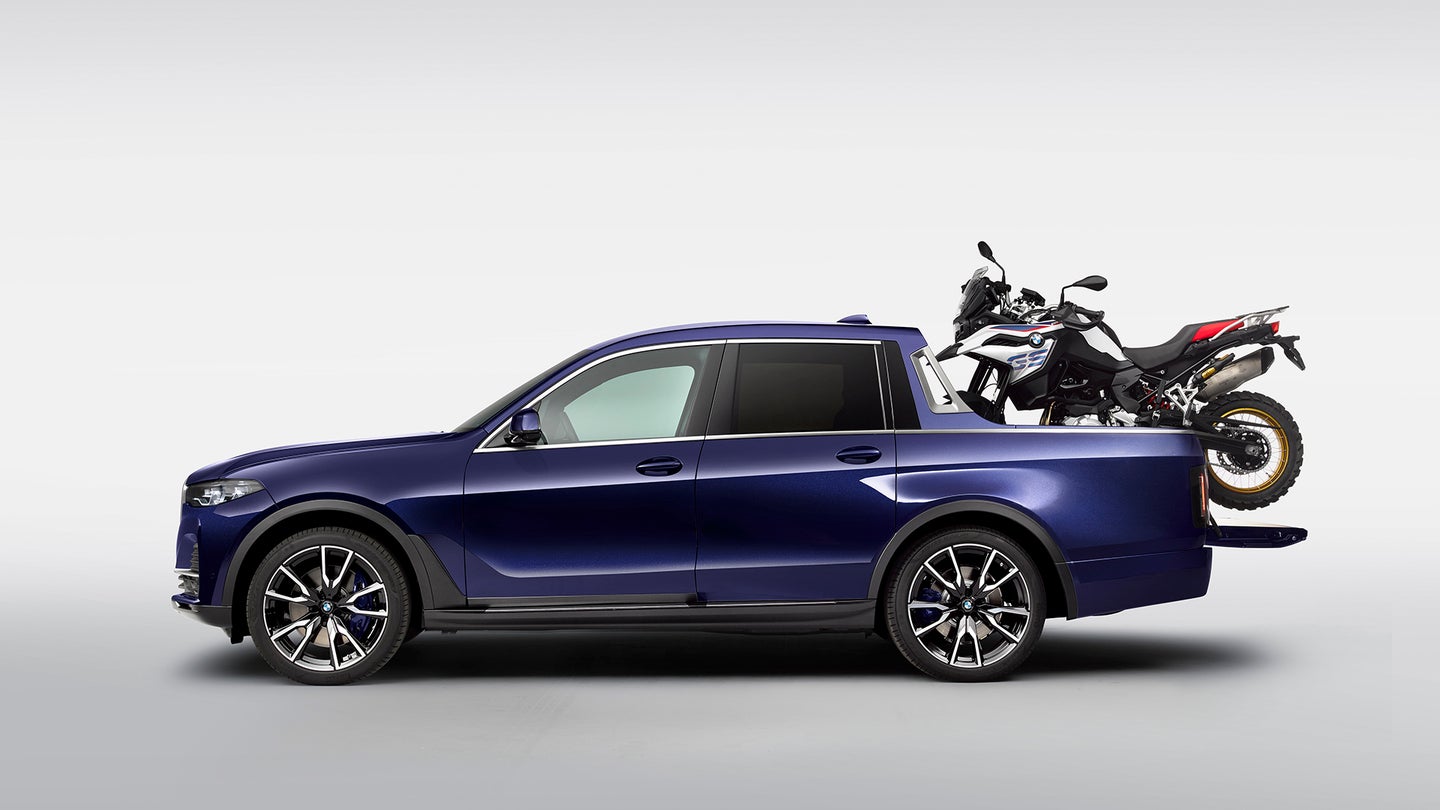 BMW is know for making models like the M3, M5, and 7-Series. But how about a BMW pickup? Say what? It confuses us to write it just as much as it perplexes you readers.

But here we are, looking at a unique and one-of-a-kind pickup truck based on the BMW X7. Engineer trainees at BMW’s plant in Munich decided to team up for this one-off in lieu of BMW Motorrad Days, which occurred this past weekend to celebrate BMW’s tradition for producing motorcycles.

Built in collaboration between BMW Group’s vocational students and Concept Vehicle Construction and Model Technology divisions, this oddball conversion was specifically designed to haul a BMW F 850 GS, the company’s latest all-terrain sports bike. Often, motorcyclists like to haul their bikes on the bed of a pickup truck rather than dealing with an outboard trailer, and the BMW X7 Pick-Up celebrates this common duo.

Because it’s based off of the X7, the BMW Pick-Up is not a traditional body-on-frame truck with a separate cabin and bed arrangement. Rather, similarly to the Honda Ridgeline, it features a unibody that essentially chops off the rear quarters of the X7 and opens the rear to make room for the F 850 GS.

The X7 Pick-Up itself started life as a base xDrive40i model, which means it comes with the company’s venerable turbocharged inline-six good for 340 horsepower. But engineers did more than just cut the back of the SUV open.

Instead, they extensively employed carbon fiber-reinforced plastics for roof components as well as on the rear doors and rear bed lid to help reduce weight of the standard X7 by nearly 200 kilograms, or a whopping 440 pounds. The actual length of the X7 also increases by nearly four inches as well to accommodate the extra space for the bed. Then, they lined the bed with high-quality, handcrafted teakwood as found on some Rolls-Royce models. To complete the look, it’s all finished in a BMW Individual-only Tanzanite Blue metallic. And the engineers did this all in span of just 10 months.

If you’re a hardcore BMW enthusiast that thinks the Munich automaker should only stick to building the “Ultimate Driving Machines,” you’ll be relieved to know that BMW has no plans of producing the X7 Pick-Up and that it will remain a concept.

But for those who like to think outside the box, would you be opposed to the “ultimate pickup machine?”

Trolls may attack this Bavarian bus, but they’re wasting their breath. Without a three-row SUV, BMW risked losing loyal customers to rivals.

BMW Kicks Off Pre-Production of the X7

The luxury carmaker is bringing its highly anticipated flagship SUV to fruition.