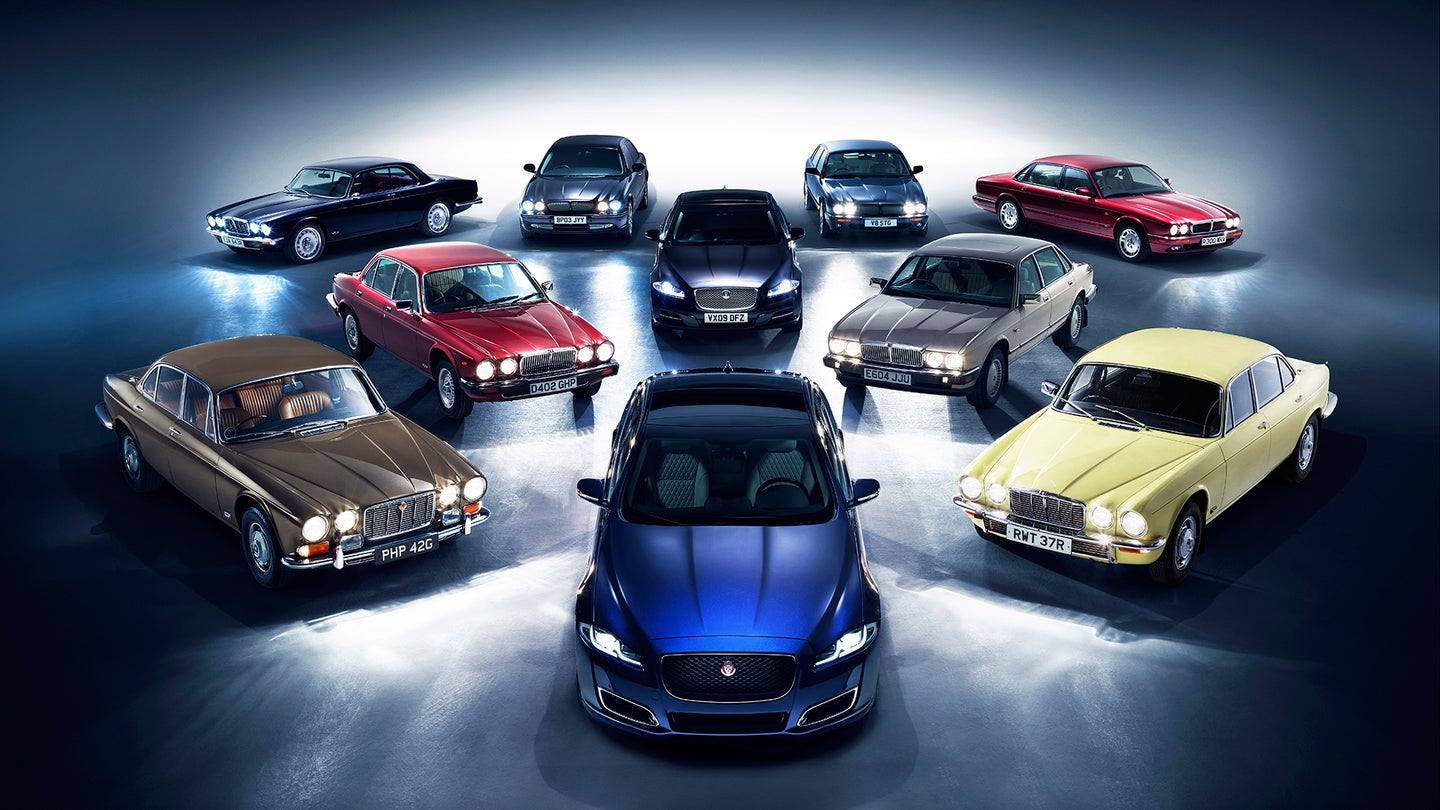 Why won’t Americans buy Jaguars? Ford never could figure that one out, so it sold Jaguar (and Land Rover) to India’s Tata Motors in 2010. After grim October sales numbers in North America and elsewhere, even Rajan Tata, the company’s patriarch, must be asking the same thing about his underperforming British stepchild: Seriously, what do we have to do to get people into a Jag?

Jaguar is still a respected name in automobiles, with a history of beautiful, elegant, high-performance cars. It's a British-royal lineage that a relative unknown like Hyundai’s Genesis would kill for. But the Jaguar name also carries baggage that a blank-slate Genesis happily does without: That this beauty may be too high-maintenance and extravagant to take a chance on. The problem, I'll argue, doesn't begin with Jaguar design, powertrains or performance. (Some interiors have been less-than-dazzling, but plenty of brands get away with that). Most of the current Jaguar lineup has garnered strongly positive reviews from writers like me, for sporty road manners and exterior design that reliably out-styles and out-sexes the competition. Jaguar can also point to marked improvements in surveys of reliability and dealer satisfaction. But mending a cracked reputation is never an easy task, as once-proud brands from Cadillac to Alfa Romeo continue to demonstrate.

Even on the SUV front, where the F-Pace provides a glimmer of warmth in the ice-cold Jaguar lineup, you can imagine the Happy Couples of America—romantic rule-breakers in their dreams, cautious pragmatists in reality—talking themselves out of a Jaguar as quickly as they fell in love with it: Yeah, it's really incredible. Your dad would just freak out, right? So, umm, should we maybe check out the Acura next? The Happy Couple, relieved that good sense has prevailed, again, scurry from the Jaguar showroom and never look back. But they’ll never tire of their shriekingly dull story of that time they almost bought a Jaguar.

As ever, Jaguar’s long-term challenges are masked by the other, more-successful name on the company letterhead: Land Rover may be listed second in JLR, but its SUVs carry most of the weight. Jaguar Land Rover posted record global sales of 621,000 units last year, and an American record of about 114,000 cars; but about 75,000 of those American sales came from Land Rover. Jaguar was indeed up 27 percent here, to just under 40,000 units, following a 116-percent jump in 2016. Yet virtually all those gains came from the aforementioned F-Pace. And forget “percentage” gains, in favor of perspective: A single Mercedes SUV, the GLC-Class, found nearly 48,000 buyers in 2017, far more than all Jaguar models combined.

Things have gotten ugly in 2018. Jaguar is on pace to sell fewer than 30,000 cars here this year, currently off 28 percent. Despite America’s torrid love affair with SUVs, even the F-Pace is finding comparatively little love, down 27 percent year over year. Where Land Rover enjoyed its best-selling October in history, the full Jaguar lineup found just 2,648 buyers here last month. The F-Pace and all-new E-Pace SUV brought about 1,900 of those. Subtract those sales, and Jaguar sold just 741 cars, total. We’re talking four models—the XE, XF, and XJ sedans, and the F-Type sports car—that delivered on average fewer than 200 sales each. That included the 78 Americans who bought an XJ—few enough to congratulate individually for their iconoclastic taste in flagship sedans—with 171 buyers for the XF and 186 for the vast range of F-Type coupes and convertibles. Porsche sold more 911 sports cars, at 789 units, than Jaguar’s entire car lineup.

With even the most-affordable Jaguar XE posting a 306-unit sales blip last month, it’s worth revisiting the big bet that Jaguar placed in 2015 on this BMW 3 Series fighter: Some analysts, clearly deep into the scotch, projected that Jaguar might sell as many as 200,000 XEs a year around the world. Even bearish types were talking 100,000. The XE has never even approached those most-conservative estimates, its fine performance undone by a cramped back seat, a cost-cutting interior, and, of course, the sedan market crashing to earth. Even BMW is struggling to find takers for its once-ubiquitous 3 Series, with sales down about 30 percent in recent years—which doesn’t auger well for Jaguar’s reworked XE that’s slated for 2020. Even the E-Pace, the smaller, attainably priced Jag SUV, is off to a slow start in showrooms.

At this point, even the muscle of big-brother Land Rover may not fully protect the pampered Jaguar sibling. That's because other JLR bets have gone wrong, in part due to external forces, bad timing, and worse luck, in what some company insiders describe as a “perfect storm.” That includes the pricey development of diesel engines and models— just in time for Volkswagen to foul the air and market with its Dieselgate scandal, which has led governments and regulators around the world to view diesel as Public Health Enemy No. 1. Are fears of diesel emissions overblown? Of course, but that’s no consolation to companies like JLR. Can’t find buyers for a Jaguar XE, whether in Los Angeles or London? How about a diesel XE, mate? Right now, you'd have better luck selling used Hummers at a Jerry Brown rally.

Both JLR brands may also face more negative exposure than any automaker from the U.K.’s looming Brexit, including potential loss of sales, jobs, and homegrown investment. The company already warned that a bad Brexit deal could cost it £1.2 billion in lost profit each year. A so-called “no deal” Brexit, in which the U.K. would crash out of the European Union without an exit agreement, may particularly imperil homegrown JLR production; or force it to relocate to the European continent, where JLR already builds SUVs in Slovakia. The volatile Brexit situation, along with plummeting diesel sales in the U.K. and Europe, have already spurred JLR to impose a reduced three-day workweek at Castle Bromwich—the former Spitfire factory that churns out Jaguar sedans and the F-Type—through Christmas.

On another dispiriting front, a major sales slump in JLR’s largest market of China—sparked by trade tensions with President Trump that have dented Chinese consumer confidence—has temporarily idled the Solihull, U.K. plant that produces the company’s popular SUV’s, including the F-Pace, Range Rover and Land Rover Discovery.

So what’s the deal with Jaguar, aside from the global chess games and traditional car models that are being sacrificed like pawns? For one, I’ve come to a sad conclusion that too many Americans have lost interest in—or any personal connection to—romantic, sporty, and historic brands like Jaguar, Alfa Romeo, Lotus, and Maserati, at least when it comes to new showroom cars. Tesla is the automaker that fires the 21st Century imagination, the brand that entices affluent buyers to take a flyer on something new and different. More-trusted and established luxury brands, from Mercedes to Lexus, snap up everyone else. There just aren't enough luxury sales to go around, and some brands aren't going to make it, as much as we car fans wish otherwise. I'm not saying Jaguar will be one of those, at least not yet. But selling 306 monthly units of your most-affordable model doesn't strike me as a sustainable business, no matter how many SUVs Land Rover can sell to cover for Jaguar. Cue the Hollies, with "He Ain't Heavy, He's My Brother."

JLR itself seems to sense that it needs to change the narrative. So with diesel’s long-term future in serious doubt, the company's next billion-dollar bet is on electrons: Ralf Speth, JLR’s chief executive officer, announced last year that every Jaguar and Land Rover model would offer an electrified version by 2020, whether a mild hybrid, plug-in, or full electric vehicle. I’ve already driven the 2019 Jaguar I-Pace electric SUV. That I-Pace is a wonderful EV—great-looking, fun-to-drive, with a legit 240-mile driving range and a $70,495 base price that undercuts the cheapest Tesla Model X by $10,200. Google’s Waymo was impressed as well, recruiting up to 20,000 I-Paces for its burgeoning autonomous test fleet. The I-Pace just began trickling into showrooms, so it’s the one model I didn’t mention in my breakdown: Jaguar sold five I-Paces in October. Hey, it's a start. If there’s still justice in the automotive world, Jaguar will sell a hell of a lot more in coming months, and not just to Waymo. And if that doesn’t work out, I’m not sure what else Jaguar can try—readers, your suggestions are welcome. Maybe they can just pry off those famous Jaguar Leapers and Growlers at the factory, replace 'em all with Land Rover and Range Rover badges, and hope that turns the trick.

Lawrence Ulrich is The Drive's Chief Auto Critic. Follow him at @lawrenceulrich.