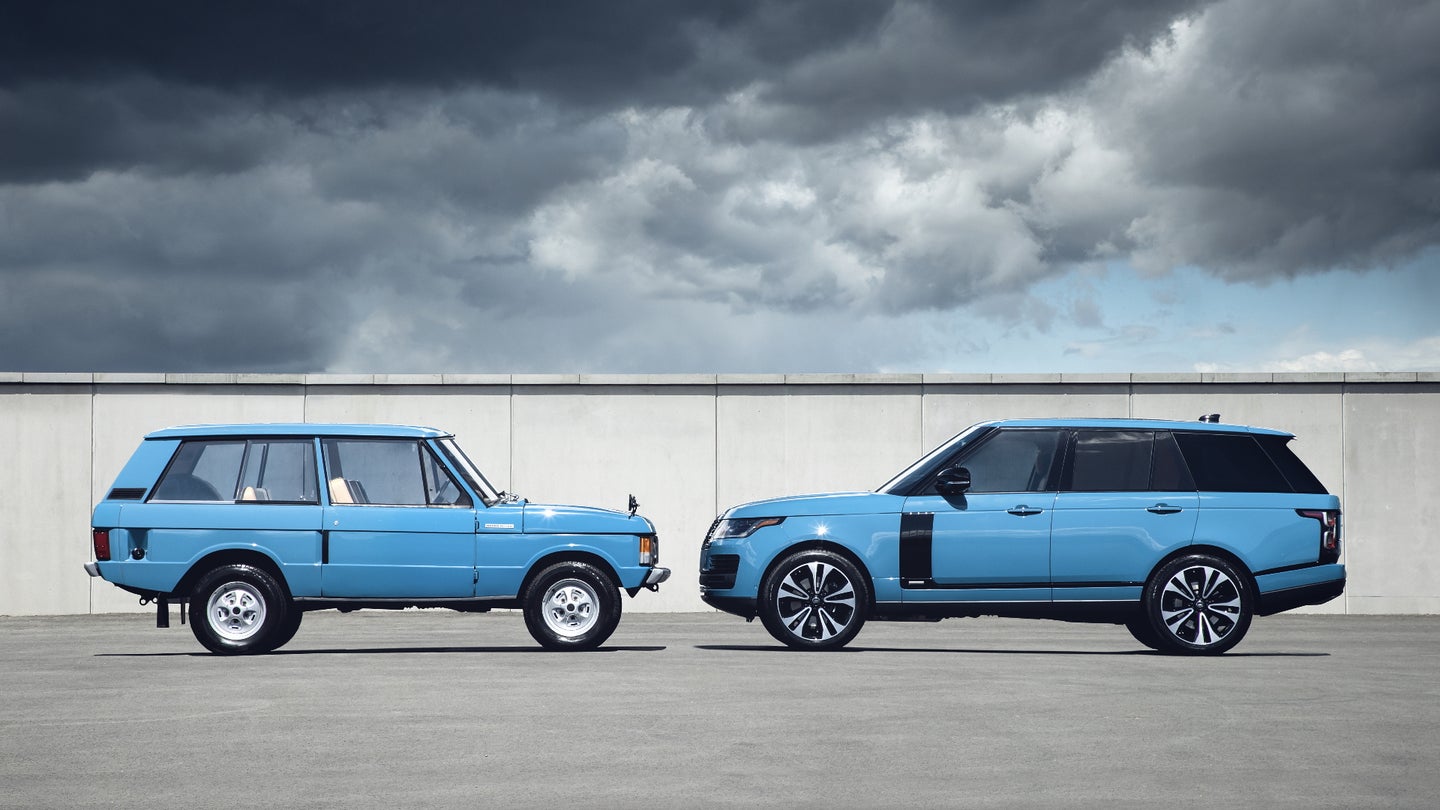 Debuting on June 17th, 1970—exactly 50 years ago tomorrow—the original Range Rover quickly became an icon thanks to its serious offroad credentials. It was the first SUV to feature a permanent 4WD system, as well as boasting ABS and traction control well before they were the norm. To celebrate the truck's illustrious 50-year history—which includes crossing the famous Darién Gap in Central America and twice being the victor of the Paris-Dakar Rally—Land Rover has decided to release a limited edition model called The Fifty.

It has a few special callbacks to the original SUV, as well as a series of exclusive luxury features that build upon the already well-appointed Range Rover Autobiography. It will be limited to just 1,970 units globally. Get it? 1970?

Anyway, the most notable changes you get with this special edition are on the outside, so we'll start there.

The biggest callbacks to the original Range Rover are the classic colors available on The Fifty. Tuscan Blue, Bahama Gold, and Davos White will be available in "extremely limited" numbers. That's alongside other carefully curated colors such as Carpathian Grey, Rosello Red, Aruba, and Santorini Black. All of the exterior accents will also be available in a color called "Auric Atlas." It's a sort of stain-finish sand color. The exterior trim is also available in a glossy black.

Buyers will have a choice of two 22-inch wheel options as well. One in a silver finish adorned with black accents, and the other in solid black. If you're worried that nobody will know you're driving what is expected to be the most expensive Range Rover out there (pricing will be announced later this year), the exterior is also punctuated with badges containing the word "Fifty" in script lettering. That script was penned by Land Rover's Chief Creative Officer himself, Prof. Gerry McGovern, OBE. He has nice handwriting, thank goodness.

The inside of The Fifty is classic British luxury, aka, an unspeakable amount of cows have met an untimely demise in order to realize the upholstery. On the Autobiography which The Fifty is based, ten different interior colors and finishes are available.

These various colors and materials will be accented by a smattering of additional "Fifty" badges around the shift knob, door sill, and glovebox. This badging is also debossed into the headrests. Your passengers will certainly be aware of your intense appreciation of the history and performance of your Range Rover.

Speaking of performance, North American versions of The Fifty will be appointed with the 5.0-liter, 518 horsepower supercharged V8 known as the P525. In the regular Range Rover, this powerplant helps the truck to sixty in around five seconds no-matter the body-style. If you, for some reason, have a problem with 5.0-liter, supercharged V8s, that's tough luck if you want a Fifty. Youll have to get a regular Range Rover, where four other engine options are available. These options include two 3.0-liter, six-cylinder mild hybrids, a 3.0-liter, six-cylinder diesel engine, and a 2.0-liter, four-cylinder plug-in hybrid.

Full details concerning the pricing and specifications of The Fifty will be announced later this year, but we do know that the luxury treatment will be available on both regular and long-wheelbase versions of the Range Rover. Considering even the cheapest Autobiography starts at $130,300, and this car is a more exclusive version of that, you should start saving your nickels if you want to pick one of these up.

Land Rover canceled plans for a two-door Range Rover earlier this year—or did it?