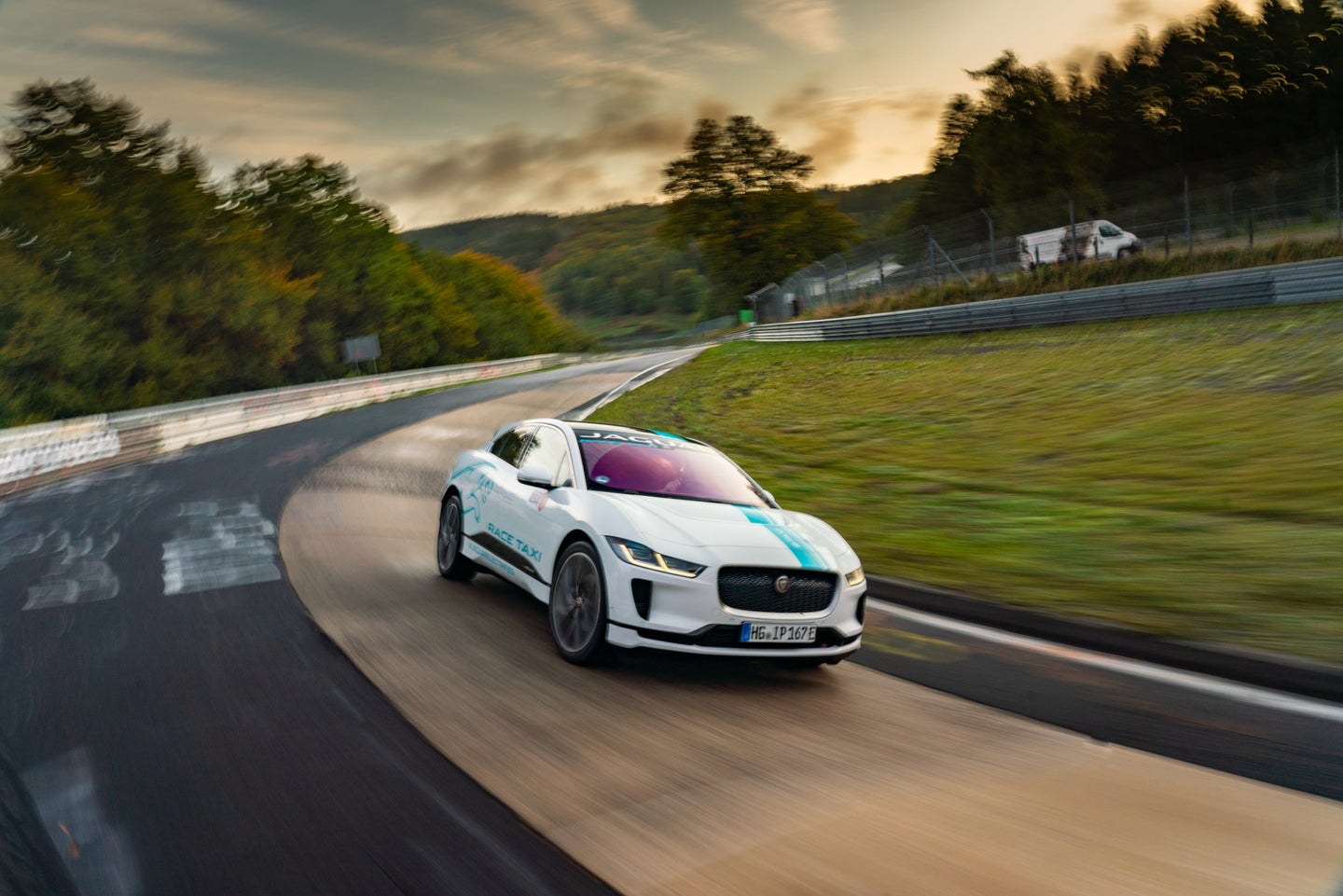 The highest-profile spat over electric vehicles' Nürburgring performance may be between Tesla and Porsche, but Jaguar's quietly had its own track-ready contender in an unlikely shape: the I-Pace crossover. While those other two have been betting it all on one flying lap, Jaguar has had its own spec racing series for race-prepped I-Paces since 2018. Now Jag wants to let you experience what the Nürburgring feels like in their own EV by offering up the I-Pace as the 'Ring's first-ever electric taxi.

For those of you unfamiliar with the concept of 'Ring taxi laps, it's simple. Different companies offer ride-alongs in fast cars around the Nürburgring's twisty, 12.9-mile Nordschleife course with a local hotshoe who knows the track well. It's the only fun taxi ride you'll probably ever have, and now you can experience what it's like in a weirdly quiet EV.

While most of these taxis are fast sedans and sports cars, the Jaguar Land Rover crew hasn't shied away from offering up fast SUVs in their fleet for hot laps in the past. Even if it sounds like an unusual choice for Nürburgring hoonery, the 395 horsepower, 513 pound-feet I-Pace "eTaxi" fits right in.

One hot I-Pace lap costs about $165, which can be split among up to three passengers for a cost of just under $55 per person.

'Ring taxis take a beating, with repeated fast laps often fully weighed with passengers in all but that middle back seat that no one ever wants to sit in. To say this is a bit of a flex on Jaguar's part is an understatement. Tesla and Porsche may be going for one fastest lap set during a private session (and sometimes don't even hold up that long), but Jag wants to demonstrate in a very public way that their EV can hold up to repeated abuse in the form of multiple 'Ring laps over the course of a several-hour open session.

After all, what's the point of a track-ready EV if it can't go back out for more laps? Plus, when it comes to alleviating consumers' range anxiety, it's repeatable performance that ultimately matters more than just one flying lap.

According to the I-Pace's taxi driver Dale Lomas, Jag's electric crossover has gotten around four to five laps per full recharge, as he explained in an email to The Drive:

From a 100% charge, we are often delivering between 4 and 5 laps before returning to the Jaguar Nürburgring Test Centre for a recharge. Using the latest generation 100 kW DC chargers it's easy enough to recharge another 3-4 [laps] in a little over 30 minutes. That cycle can continue all day. Using the high-regen setting we are often recouping between 6 and 7 kWs per single lap of the Nordschleife. The most of that being in the first half of the lap, where the track plunges 1000 ft down to Breidscheid. Careful braking results in maximum regen, with the side-effect of the ventilated disc brakes still being quite cool by the end of several back-to-back laps!

Lomas has been driving the track for over 20 years, routinely races in the Nürburgring 24 Hours race, runs the Bridge to Gantry blog about the track, and last won a VLN championship there in 2017. He also serves as a test driver on Jaguar Land Rover's durability team. The Nordschleife's vastly varied terrain and many curves have long been used to test out driveline endurance long before it became the latest, greatest EV smack talk battleground.

Jaguar also has the only factory-backed taxi effort left at the 'Ring. With EV durability at the infamously grueling track becoming such a major talking point lately, I'd say they made the right choice in sticking around.

For those of you still interested in a more conventional 'Ring taxi experience, Jaguar will still run their XE SV Project 8 sedan alongside the new EV. The Project 8 features a much louder exhaust note, seats just one and costs $275 per lap. If you'd like to book a ride in either car ahead of a trip to the 'Ring, sign-ups are here.