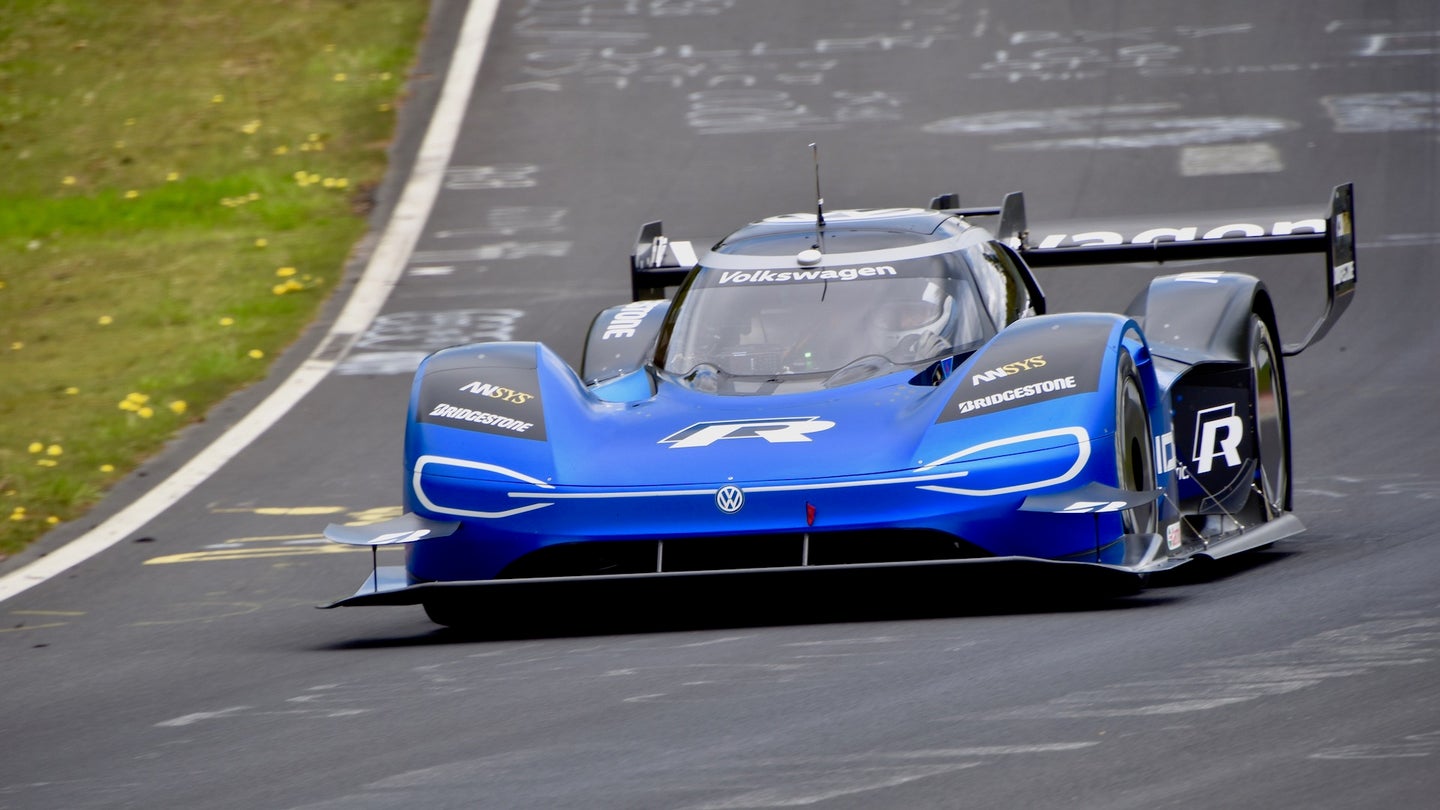 On June 24, 2018, the Volkswagen I.D. R summited Pikes Peak with two-time Le Mans winner Romain Dumas at the wheel. Just eight months earlier, it was a sketch on a cocktail napkin. With a 680-horsepower drivetrain and a body sculpted in a wind tunnel, the VW I.D. R was a skeleton crew of a car. There simply wasn't time to incorporate tech like active aero, electronic differentials, or brake vectoring. What went up the hill to Pikes Peak and absolutely crushed the record was little more than a drivetrain, some wheels, a cage, and a wing that looked wider than the Panama Canal.

But the I.D. R's expedited development and relative simplicity somehow worked. At Pikes Peak, the I.D. R prototype laid down a time of 7:57.148, nearly a minute faster than the previous electric record, and 16 seconds quicker than the overall. When it reappeared at the Goodwood Festival of Speed the following month, it won the 2019 timed shootout overall, trouncing the electric record, and posting the third-fastest time in Goodwood's history in the process.

And in January of this year, Volkswagen announced it will deploy an updated version of its I.D. R electric prototype to Germany's infamous Nürburgring Nordschleife in a bid to take the electric lap record from the Chinese-built Nio EP9. The Nio is a road car, and the VW is a purpose-built race car, but victory for Volkswagen is not a foregone conclusion.

Pikes Peak and the Nordschleife couldn't be more different tracks. But they share crucial similarities. Both wind across rugged countryside. Both are over 12 miles in length, with around 150 turns. Both feature narrow confines, stupefying changes of elevation, and patches of rough road with dire consequences. But the differences are critical.

Take the straights. Pikes Peak's longest open-throttle sections are around a third of a mile long; the Nürburgring's long back straight is more than 1.7 miles wide open. Elevation change at the Nürburgring is pretty significant for a racetrack, with 984 feet between the track's lowest and highest points, but Pikes Peak starts at 9,390 feet and ends at 14,114. That means the minimal grip—mechanical or aerodynamic—at the start only diminshes as the track progresses. Pikes is (mostly) uphill and, with few straights, brake wear is of little concern. At the Ring, even carbon brakes often come up short.

In Pikes Peak spec, then, the I.D. R isn't up to the task of going after 'Ring records. Plop the car on that 1.7-mile straight, and watch its high-altitude aero produce insurmountable drag. It would likely struggle to exceed 100 mph. Even if the mountain-spec I.D. R managed to reach its electronically limited top speed of 150 mph, and sustain it for the full straight without burning out its battery, its brakes would fry at the far end; they were designed to slow the car with the help of gravity, and only occasionally from speeds of over 100, not regularly far from speeds far in excess of it.

To address these problems, Volkswagen launched a six-month upgrade program to prep the I.D. R for its Nürburg outing, focused on upgrading the car's aerodynamics and powertrain. Hundreds of simulated laps tested every upgrade configuration imaginable before Volkswagen Motorsport settled on a development direction, bringing the car in line with what a 'Ring record will require. Despite official Volkswagen Motorsport materials touting updates to the car's chassis, the I.D. R's aerodynamicist Willy Rampf told The Drive that its bones remain practically the same as those that were underneath its skin in Colorado.

Along most of its route, Pikes Peak has two thirds the Nürburgring's air density, meaning the German track requires an entirely different aerodynamic package. So the track-spec I.D. R's rear wing is lower and shallower, capable of developing the same downforce with less drag-inducing frontal area. To cut drag further, the 'Ring wing can be flattened out at the press of a button, for a Formula 1-style Drag Reduction System ("DRS").

Though this system is helpful for attaining the I.D. R's 250 kph (155 mph) top speed on the Nürburgring's longest straights—made possible by a longer reduction gear ration—Rampf says that DRS's primary purpose isn't to increase top speed, but efficiency at said speed.

Unlike most combustion-powered cars, which are at their most efficient in high gear, one-speed electric cars are relatively inefficient at high speeds, drawing huge stores of energy from their batteries, which have a tendency to get hot during heavy use. Overheated batteries at a minimum mean accelerated degradation and decreased power output, and at worst, they can explode into hard-to-extinguish lithium fires. Ergo, DRS is a safety feature and a performance augmentation in equal measure.

For the same reason, Volkswagen has recalibrated the I.D. R's battery controllers to minimize heat production when traveling at Vmax. Testing at France's Circuit Paul Ricard has already demonstrated these upgraded control systems in combination with DRS to be up to the task of withstanding the 'Ring.

And when the I.D. R does reach the end of the straight, it'll have studier friction brakes on which to lean, in addition to its regenerative brakes. Regenerative braking turns the motors into generators under deceleration, charging the battery back up, and in the I.D. R's case, a percentage of the electricity it uses in a race comes from this practice of energy scavenging. Rampf tells us that the balance of friction and regenerative braking wasn't ideal as of the car's first competitive outing last June, and that improvements to the car's brake-by-wire software has resulted in a car that's more predictable, and easier to push to its limits.

If there's one piece of the I.D. R that doesn't need updating, it's the carbon-based element at the wheel: Romain Dumas. The Frenchman isn't just a two-time Le Mans winner, or a Pikes Peak record holder, but also a four-time (three consecutive) winner of the 24 Hours of the Nürburgring. Save for former Ring Taxi driver Sabine Schmitz, Dumas knows the Nürburgring better than anyone.

Volkswagen Motorsport debuted the evolved I.D. R this week in Nürburg, and will take aim at Nio's track record some time this summer. Officially, Volkswagen's only goal is to crack the electric record, though it said the same before mulching the overall record at Pikes Peak.

But this time, that modesty may be worth believing, as the Nordschleife's all-time record of 5:19 is in the hands of an even lighter, more powerful prototype: the Porsche 919 Evo. That time may have to wait for the next iteration of I.D. R... or another generation of electric race cars.