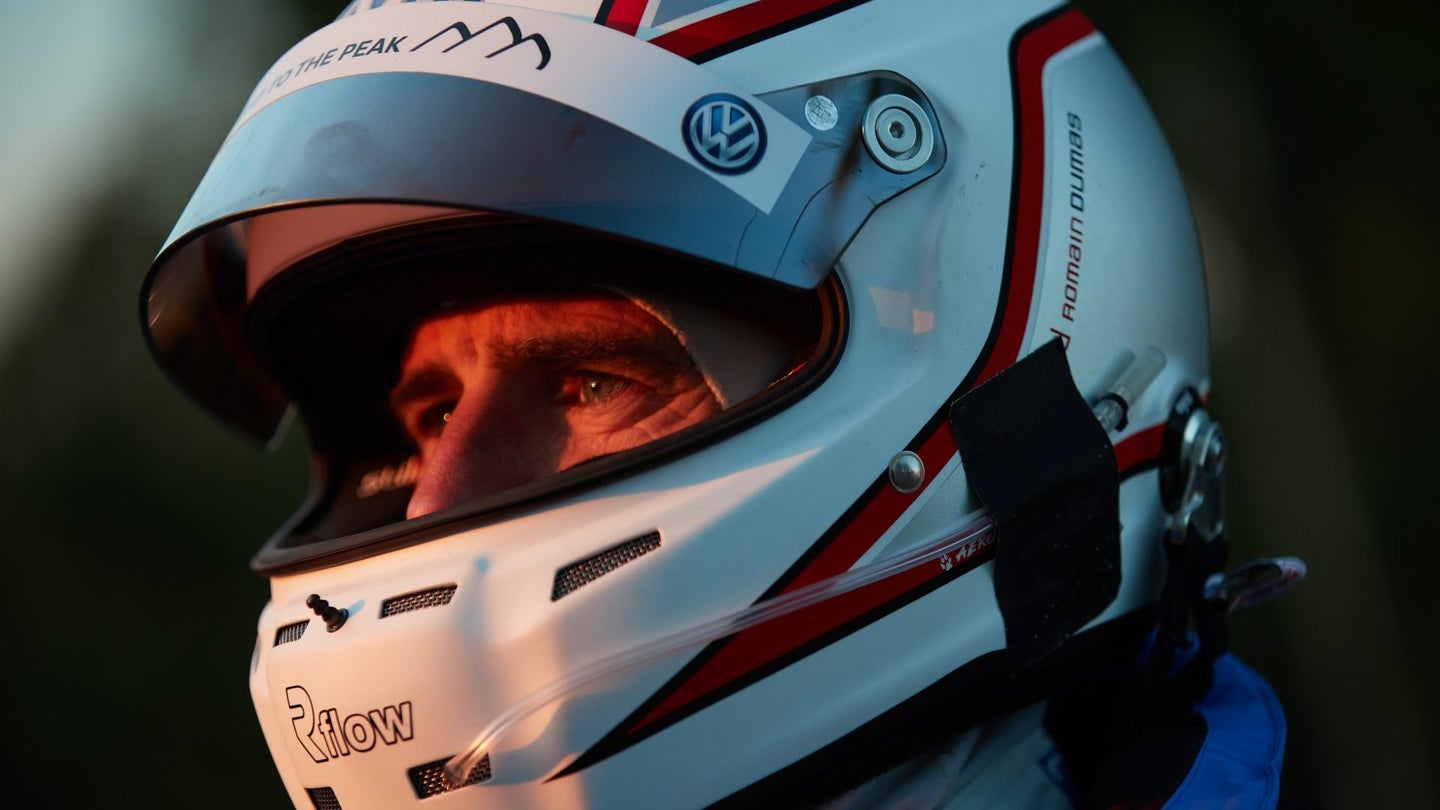 In a media conference on Friday, Dumas explained his history with Pikes Peak, and how he came to be at the helm of the latest campaign to set records at Pikes Peak by an international automaker.

Dumas revealed that he was invited by Peugeot in 2013 to drive the 208 T16 that set the record that year. As he was then tethered to Porsche and had Le Mans obligations to fulfill around that time, he could not make the race, and Sebastien Loeb drove in his place to shatter the course record. Dumas was nevertheless interested in mounting his own challenge to Loeb's record and began looking for the winningest carmaker of European hillclimbing, in the process stumbling on prototype racing manufacturer Norma.

His team and Norma partnered up to develop a car based on the company's M20 prototype, and Dumas has won Pikes Peak thrice since 2014. His 2017 race in the Norma MXX RD Limited was on track to come close to the course record, but engine problems in the final leg of the race handicapped him into the nine-minute range. Dumas concluded after this that the future of success at Pikes Peak is electric, due to the short race distance, extreme power output, and altitude insensitivity, but he also knew his current team was incapable of building an electric car worthy of challenging the record.

Enter Volkswagen, with its I.D. R developed from a cocktail of Porsche and Norma expertise. As much knowledge as was relevant was transferred between Dumas' hillclimb program and the Volkswagen effort, but with the MXX RD Limited and I.D. R designed around differing powertrains, carryover was limited to components like the power steering—but even that was heavily modified with a faster rack to account for the differing driving styles between internal combustion and electric cars. As Dumas described it, turbo lag on the Norma allowed him to open the steering slowly while power built behind him. With no patience needed before electric motors deliver their full wallop, the steering rack will consequentially be faster.

Despite some shared parts, driving the I.D. R is totally unlike its Norma cousin.

"The car is heavier, but the car has a lot more torque, more power, more downforce…different numbers, you cannot compare [them], it is very difficult to compare," Dumas explained to The Drive.

Much of what was transferred from the Norma program to Volkswagen's was modified by the program technical head, Francois-Xavier Demaison, despite a desire to keep as much the same as possible.

"I would say right now from the Norma I used last year to this car 10 percent, not more," said Dumas. "I think Demaison at the start did not want to change a lot but at the end, but when you are an engineer, you want to change everything and make [it] all better, I can only be happy."

While the car may differ, one constant (a term used loosely) remains: The challenge that is Pikes Peak. Nevermind the year-to-year changes with which drivers must grapple, such as the repaved section near the summit Dumas encountered; temperature, weather, road conditions, and other factors must be accounted for by drivers on every new run.

"We start with 20 degrees Celsius, and we finish the race at 5 degrees Celsius [sic]," explained Dumas. He pointed out the regularity with which patches of gravel appeared on Pikes Peak, a hazard not common on smaller European hillclimbs or controlled environments such as race tracks. Some of these problems can be held at bay by qualifying well for Pikes Peak, which grants an optimal race start time toward midday when other competitors have swept the road clean and rubbered in the tarmac.

Though some problems can be cleared by the competition, not all will be, and Dumas must leave some of the car's potential on the table to leave margin for error, even while chasing down the electric course record. He expressed confidence that the I.D. R has the potential to take down Peugeot's record, but on account of a lower-risk race strategy and only having the electric record in its sights, he and Volkswagen will not target Loeb's 8:13 overall record.

Because of the course's unpredictable conditions and single shot at the summit, Dumas is not sure when electric power will surpass internal combustion and take the overall course record. Should he and the I.D. R bare their teeth this year and come close to the overall record, room for improvement and time left on the table could be raked in for future entries—should Volkswagen return to Pikes Peak again.

In the wee hours of the morning, The Drive was present for Volkswagen’s onsite test of its electric Pikes Peak prototype race car.

This year marks the seventh time that Acura competes in the famous ‘Race to the Clouds.’