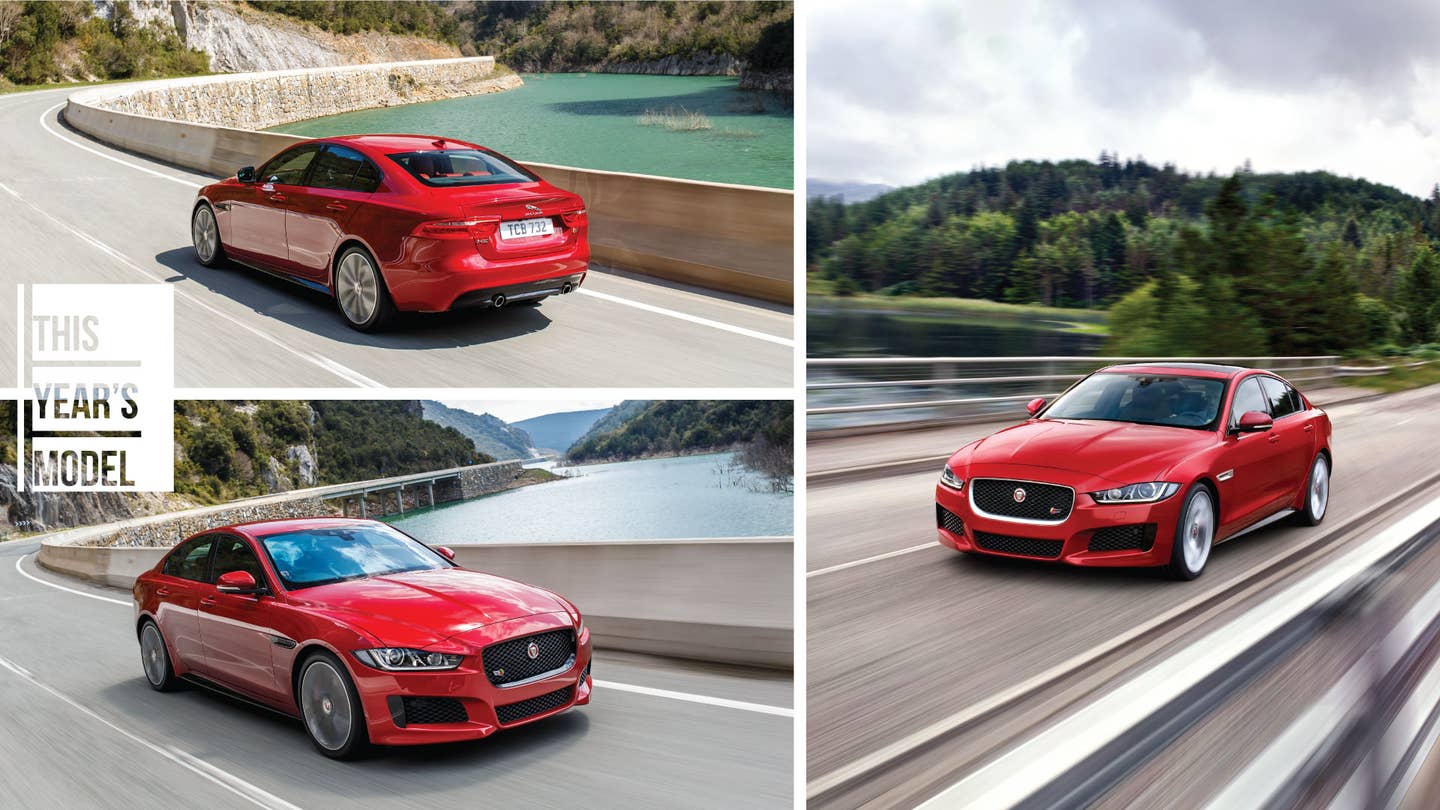 Tick-tock, Jaguar: The clock is chiming midnight, the soul-stealing bean counters at hand. This is the brand with more critical success, but less to show for it, than any in the luxury realm. Jaguar can barely twist enough American arms to move 15,000 cars a year, even as Mercedes, BMW, and Lexus all sell well over twenty times that figure. In other words, you’ll see 60 total Benzes, Bimmers, and Lexii in neighbors' driveways before you lay eyes on your first Jag. That’s insane.

When you can’t move models as debonaire and sporting as the XJ and XF sedans, you don’t need a Wall Street weatherman to know which way the wind blows. Though it kills us to say it, most sedan buyers just don’t prioritize sporty driving dynamics. And those buyers either don’t trust Jaguar, or they stopped paying attention to the brand. Despite excellent reliability scores and warmly positive notices for its modern lineup, too many people hear “Jaguar” and think, “troublesome, overpriced British car for silver-haired widower,” not "smart-money luxury car that’s fit for the whole family." It the same situation Cadillac finds itself in, but far more dire: When you stop competing for a few decades, you lose an entire generation of buyers to the likes of Lexus, BMW, and now even Audi. And it’s hard as hell to win them back.

So to call the XE compact sedan—along with its cavalry-to-the-rescue partner, the F-Pace crossover—a "make or break" model is to understate the case. Fortunately, Jaguar’s Hail Mary seems right on target. Reeling in the fast-spiraling XE 35t R-Sport, I proceeded to juke my way to every end zone in sight, so happy that I wanted to spike the damn thing and thank my Lord Jesus. In your face, soft-ass sedan bitches!—a taunt I’d extend to any rival, save the benchmark Cadillac ATS or a fully-girded BMW 340i. The electric steering is fast and revelatory, leaving you one finger twitch away from cornering nirvana. The driver-adjustable adaptive suspension charmed the snaky roads of New York’s Hudson Valley; in the Jaguar XE, the world really is flat.

The supercharged, 340-horsepower V6 emitted a whiskey-throated growl, minus the burps and backfires this engine makes in the F-Type. A linear, thrusty delight to nearly its 7,000-rpm redline, the 3.0-liter toasted the arrival of 60 mph in 4.9 seconds. Then it demanded another shot with its best bud, the faultless eight-speed ZF automatic transmission that also hustles the 3-Series and Audi A4.

Fun? You bet. Yet the Jaguar isn’t obnoxious about it, some sweaty rogue in a rugby shirt. Cannily, the XE doesn’t exclude men or women (the majority, honestly) who just want a comfortable, smartly appointed luxury sedan. If said sedan can stop neighbors short as they water the lawn, all the better. The striking XE is born to strut, its ground-hugging fuselage 1.5 inches wider than a 3-Series and 0.6 inches lower.

With a ride-and-handling balance that recalls the BMW salad days, the XE butters pavement as well as the new Audi A4, and almost as creamily as a Mercedes C-class. Credit a suspension with double wishbones up front and a unique “Integral Link” rear, derived from the F-Type sports car. Because the design separates lateral and longitudinal forces from vertical motions, Jaguar engineers say they can spec 30 percent softer bushings than rivals, with zero performance handicap. Just to be sure, I drove a Cadillac ATS 2.0 (with a manual transmission, which you can’t get on the Jag) back-to-back with the XE. The Jag danced through corners in similar quicksilver style, enough to call it a toss-up. But the supercharged Jag is quicker than either the four- or six-cylinder ATS. And automatic-versus-automatic, the Jag’s industry-topping eight-speed, better than some dual-clutch gearboxes, is quicker and smoother than the Caddy’s.

Like any top handler, the Jaguar evinces a lucid sense of its environment. It sails through space and matches its pilot thought for thought, an X-Wing daredevil that carves canyons while pursuers crash and burn. Yet the Jag stayed compliant and unstressed even when I abused it like a cigar-chomping flight instructor: Just an “A” grade all around in power, performance, and sophisticated feel.

And yet. In frustrating Jaguar fashion, exterior design and performance are great . . . but open the doors and you’re faced with “good enough.” BMW could use an interior makeover, but Jaguar needs a full intervention; a roomful of concerned fashionistas to tell it that copping cheap plastic isn’t cool, whether it’s the flimsy paddle shifters, the chopping-block steering-wheel spokes, or the inescapable swaths of piano black. (Actually, let’s stop calling it “piano black,” since even Schroeder would reject an instrument clad in the smudgy stuff.)

I snuggled right into the shapely leather-wrapped seats, an interior high point. But driver’s gauges are literally by-the-numbers, and a strip of green-blue console lighting is as dated and fusty as Aqua Velva. It’s as though Jaguar, sensing the stakes, lost its nerve and went dead-conservative to avoid scaring off prospects who might otherwise choose an Acura.

Jaguar’s new InControl Touch Pro infotainment system whips its old, Pleistocene-era unit, but that’s damning by faint praise. As with Cadillac’s original CUE, I found myself fingering the wonky, 10.2-inch capacitive screen three or four times before it answered the bell to perform a function. Subtract more points for faint, spidery map displays and tiny, hard-to-press hieroglyph icons. A passenger chortled over main icons that display actual photographs of their functions; an old-fashioned phone booth on a British hillside, a magnifying glass resting atop a map. The cheesy images recall bad clip art, hardly appropriate for a modern British sport sedan. But I did save applause for the optional, crystalline 825-watt Meridian sound system, and the ability to separately adjust throttle, suspension, and transmission to your personal driving taste.

One enduring mystery of Jaguars is why their aluminum-intensive cars end up heavier than many steel-boned competitors. At 3,795 pounds in V6 AWD trim, the XE weighs about 125 pounds more than a comparable Cadillac or BMW, despite the supposed weight-saving aluminum. The other numerical bummer is that Jaguar has limited all XE’s to a 120-mph top speed.

Other numbers favor the Jag, however. The trunk, despite a smallish opening, swallows a midsize-like 15.9 cubic feet of gear—about 20 percent more than a C-Class or Audi A4, and 60 percent more than the ATS’s scrawny trunk. The back seat isn’t fit for giants, but that’s par for the compact course, and six-foot-tall adults can manage.

Whether those grown-ups find their way into Jaguar showrooms, and eventually the XE, is the bigger question. To draw them a map, Jaguar’s wise new strategy is to undercut its main rivals’ prices. At $35,895, the XE 25t sets the welcome mat for easiest entry. That rear-drive model brings a 240-hp, 2.0-liter turbo four from the Land Rover Evoque, at a price that chops a comparable BMW, Audi, or Mercedes by roughly $2,000 to $4,000. Jaguar says that XE 25t manages a 6.5-second squirt to 60 mph.

Mileage lovers can choose the diesel XE 2.0d version for $37,395 to start, with a refillable tank of smog-fighting urea fluid to quash anxiety over VW-style diesel hanky-panky. Use it in good health, with 180 horses, 317 pound-feet of torque, and a 7.5-second excursion to 60 mph. Jaguar just passed us some great news, the EPA having granted the XE a lofty 32/42 city/highway mpg rating with its new Ingenium diesel. Throw in $2,500 for AWD, available only on diesel or V6 models.

Finally, a supercharged, rear-drive XE 35t starts from $42,695. My lavish, loaded R-Sport model maxed out at $52,695—about $6,000 less than the loaded four-cylinder, rear-drive Cadillac ATS that I tested, despite the Jaguar’s advantages of a supercharged V6 and AWD. It’s also several thousand dollars below a loaded BMW 340i xDrive, or the supercharged V6 Mercedes-AMG C43.

Will the Jaguar’s come-hither price matter? Will its sparkling performance carry the day? Hazy memories have largely blanked on the woeful, Ford Mondeo-based X-Type, Jaguar’s last attempt at an entry-level sedan. This XE represents a clean slate for the Tata Motors-owned Jaguar Land Rover, and deserves to be judged as such. My take? Too many enthusiasts bitch and moan over a shortage of hot-driving, high-personality cars, but when one comes along, they ignore it and have what the other guy’s having. It happened with the ATS, spurned in favor of safer choices and more aspirational badges.

For those who seek genuine rebellion against the four-door establishment, the Jaguar XE is both shining torch and scalding weapon. A bit of Brexit, if you will, against the sport-sedan dominance of Germany. Ride it if you dare.