Obscure Mitsubishi Evo 8 Base Model Had Steelies, Lots of Sidewall, and No AC

Don't forget the hand-crank windows, either. 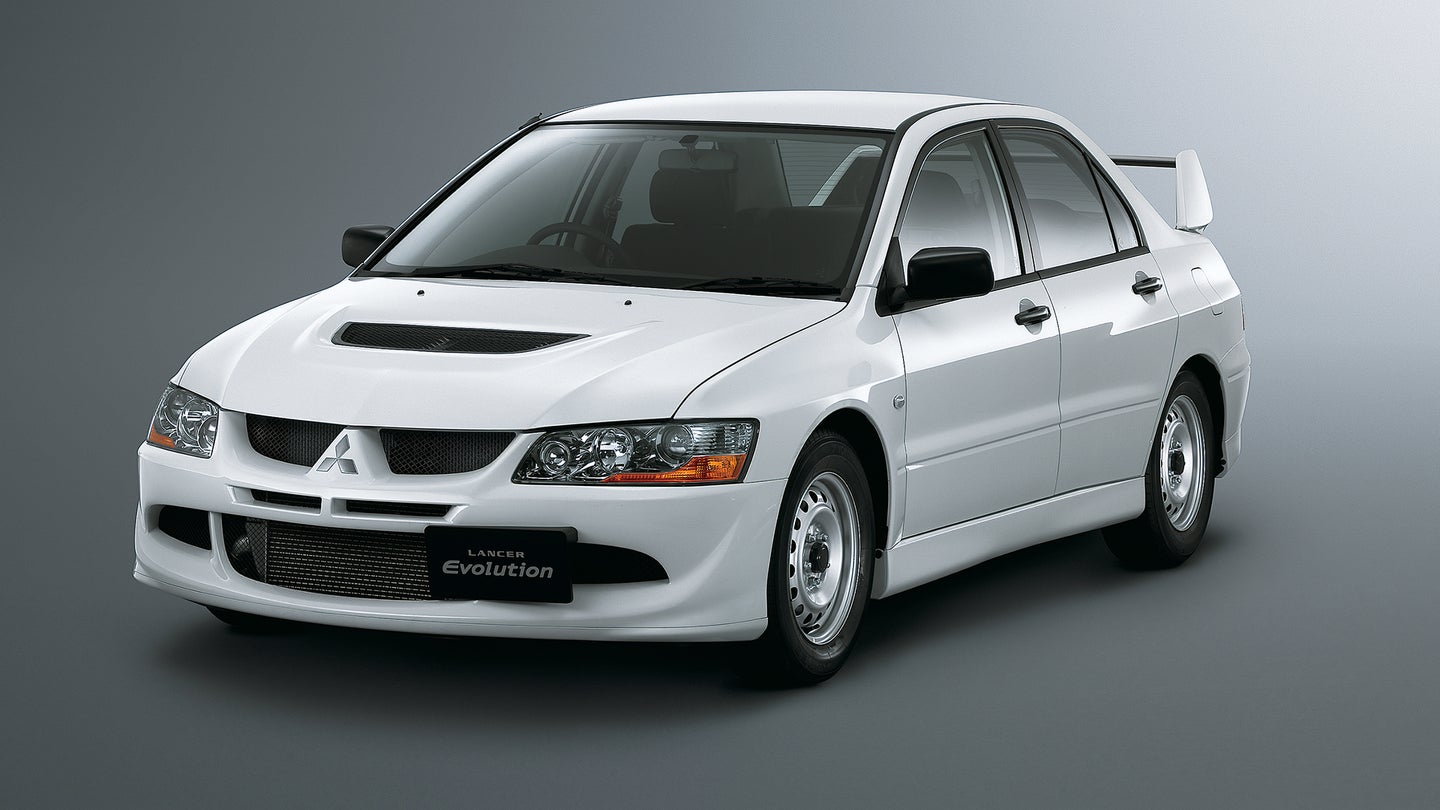 The Mitsubishi Lancer Evolution was one of the last cars of its breed. It oozed raw power and provided the driver with a certain visceral connection to the road that many modern cars are missing, the perfect combination to take on just about any track—asphalt or dirt—with enough driver willpower.

Fortunately, the United States was lucky enough to actually get three generations of Evo before the car went the way of the dodo. But there was one specific variant that proved Mitsubishi was once interested in giving customers the chance to own a cheap, fast car: the lightweight Mitsibushi Lancer Evolution RS.

The Rally Sport (RS) trim was a motorsport-focused variant of the Evo. It was stripped down, lightweight, and served as a platform that consumers or motorsport teams could pick up and begin transforming into a proper race car with ease. In fact, the RS trim followed the Lancer Evolution through its lineage from inception, meaning that the automaker was selling RS-trimmed Evos well before it was even a thought to sell the sedan on U.S. soil.

Before we get started on breaking down this bad boy, it's worth bringing up that the U.S. technically got an RS trim for the Evolution—for the Evo 8 between 2004 and 2005, and the Evo 9 just for the 2006 model year. And while the U.S. model had lots of amenities stripped out in favor of lower costs and a more analog driving experience, Japan really got the good end of the deal, and that's the Evo we're going to talk about today.

Visually, the Evolution 8 RS looks almost like any other Evo, just on some winter tires. Admittedly, steel wheels are always cool, but to the uncultured eye, they definitely scream base model Lancer over performance-trimmed Evo. If it wasn't for the door handles and mirror caps that didn't receive a paint-matching treatment, it'd be hard to point this out in passing.

The RS came factory with these 15-inch steel wheels, riding on balloon-spec 205/65R15 tires. Buyers could also opt for the Enkei-branded 17-inch GSR wheels. Again, remember that Mitsubishi's ideal customer was involved in motorsports and would likely be changing out the wheels anyway.

Once the driver plopped down in the standard "Sports" seat instead of the Recaro the Evolution 8 GSR normally came with, cost-cutting was immediately apparent. Standard were manual windows, manual locks, manual mirrors, no air conditioning, no interior trunk release, no radio (although the harness and speaker brackets were fitted in case the owner wanted that to change), and much more (less?). One sun visor remained for the driver, though the vanity mirror was removed.

And just about everything that was removed played a part in reducing the car's overall weight. Even the gas tank of the Evo 8 RS was reduced by 1.3 gallons, which helped cut down on dead weight. The base RS weighed in at just 2,910 pounds, meaning that 192 pounds of optional equipment were removed when compared to the line-topping GSR. It also meant hearing every pebble kicked up from the road thanks to the lack of sound deadening, which Mitsubishi says saved around 44 pounds alone. 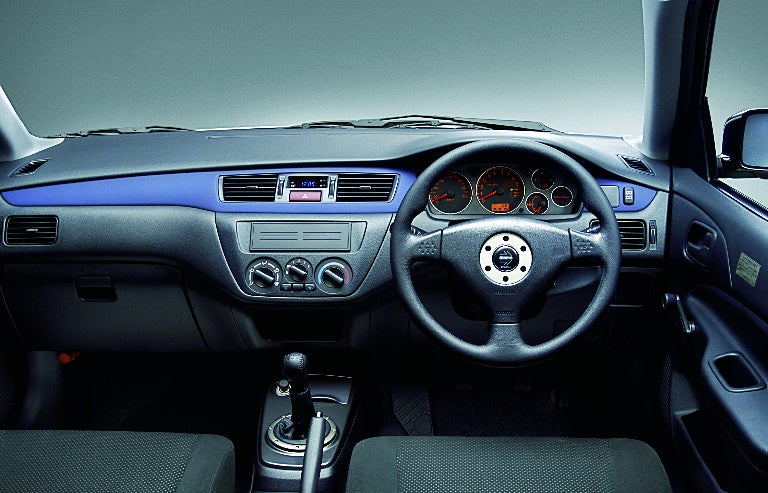 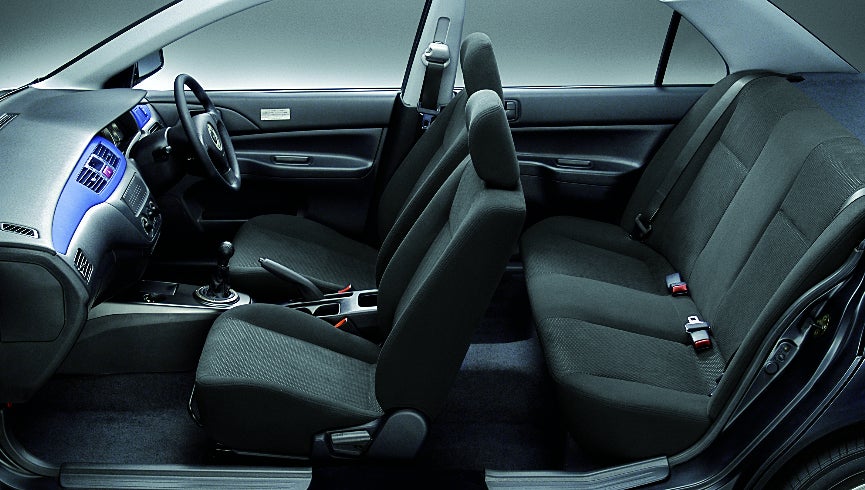 The mechanical trimmings are also interesting for the Japan-focused RS model.

Some key differences included factory Brembo brakes that were an optional upgrade on the RS 5M/T but standard on the RS 6M/T. And the 17-inch Enkei wheels mentioned above? The RS 6M/T received those as standard equipment, plus a front cross member brace.

Both RS cars were offered with Mitsubishi's Active Center Differential as standard equipment; however, the Active Yaw Control system—which controlled torque vectoring between the rear wheels—was optional on both trims, along with anti-lock brakes. Both came standard on the more consumer-friendly GSR trim.

As an aside, Mitsubishi told The Drive that the RS 5M/T was built to be better suited for rally use from the factory, whereas the RS 6M/T was intended for circuit use. And from what we could translate of the original Japanese press release supplied by the automaker, Mitsubishi really peddled RS-trimmed cars as something that relied on driver performance rather than electronic nannies.

When new in 2004, Mitsubishi priced the RS at around $25,000 (2,740,000 Yen). Today, that would be the equivalent of roughly $36,600, which is still about $10,000 less than the cost of the GSR at the time, accounting for inflation. For normal consumers, ditching the most basic options would be a hard sell, but for motorsports teams? Saving a cool ten grand on top of the labor used to yank out unnecessary equipment is a pretty major difference. 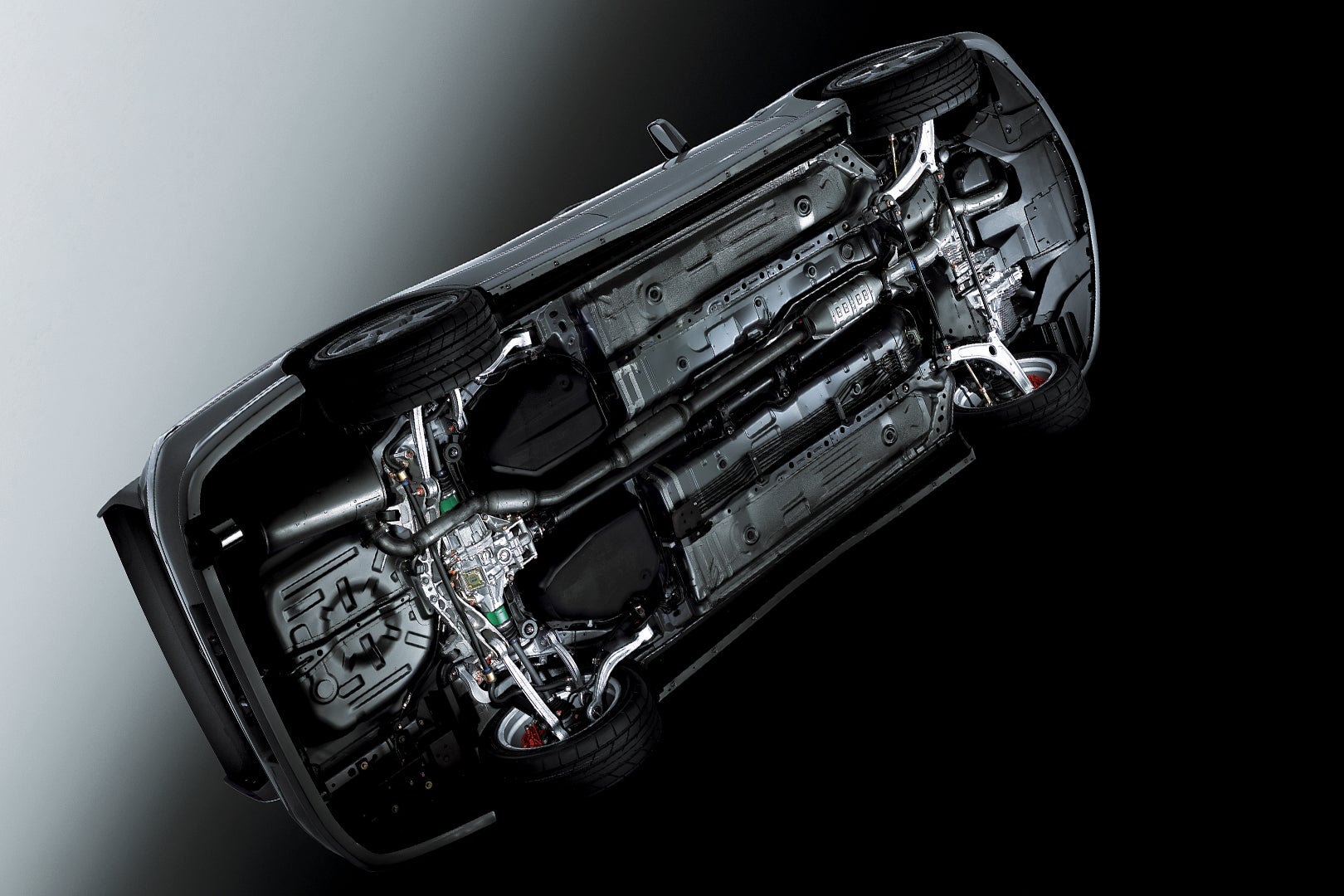 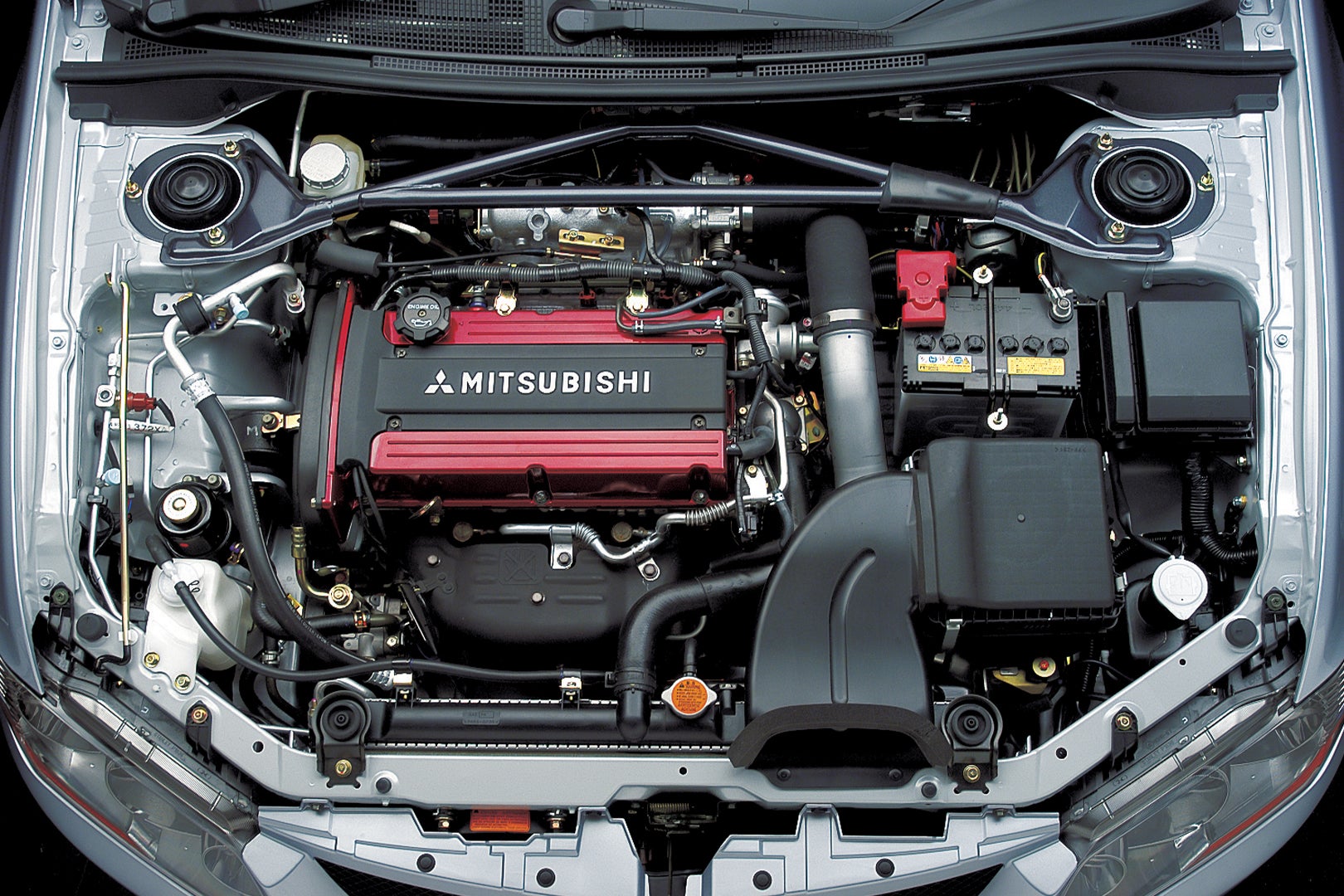 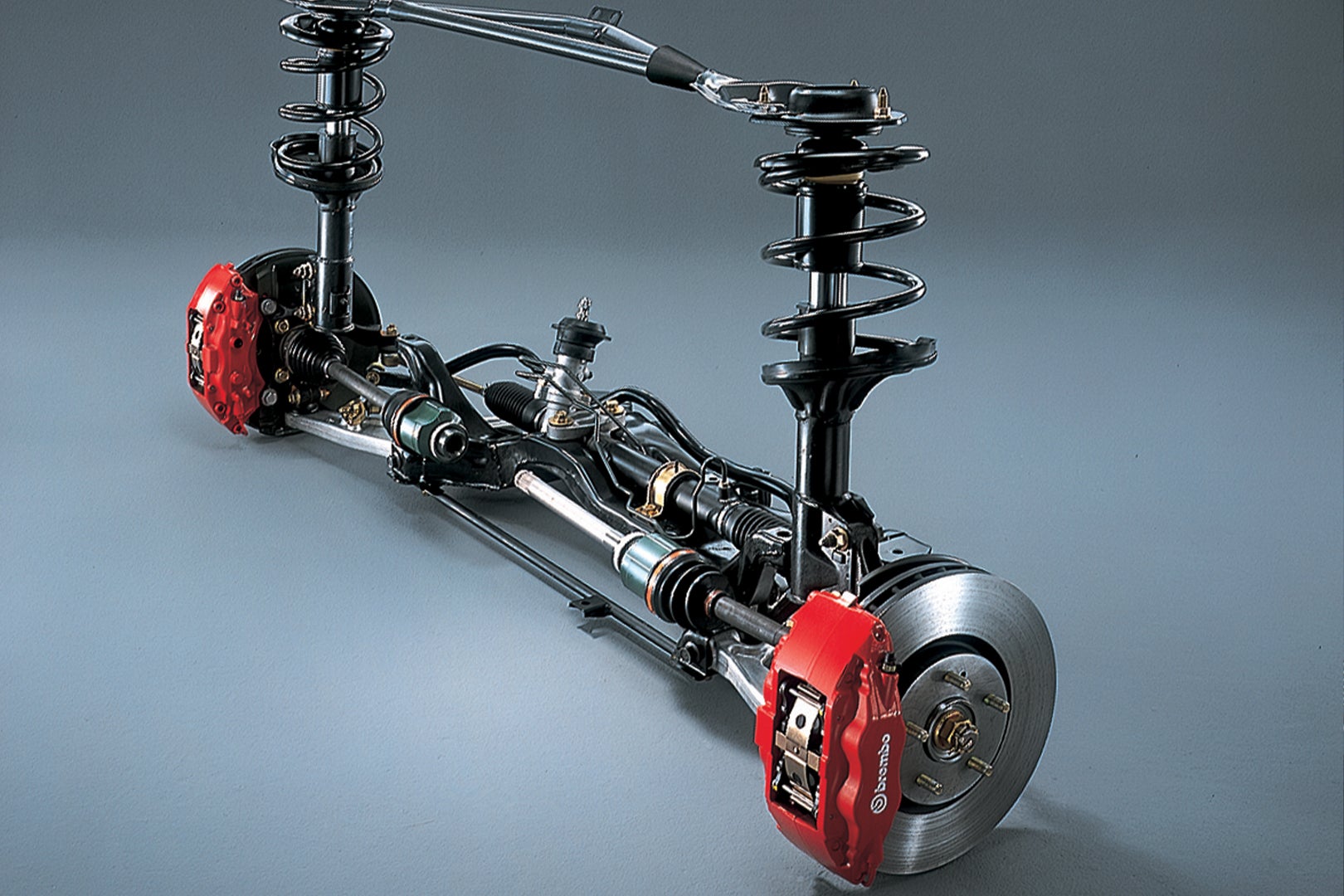 That being said, it's unlikely that Mitsubishi sold a huge number of these basic Evos. In fact, the actual production number is a mystery even to the manufacturer. Of the 6,000 total units of the Lancer Evolution 8, Mitsubishi couldn't verify the exact RS production figures, but recent circulating information suggests around 332 examples of the Japanese-market RS were built.

This concept isn't new, and believe it or not, it actually hasn't stopped—at least not in Japan. Mitsubishi no longer sells the Lancer Evolution, but Toyota is a great example of how this concept is alive and well today. Just look at the 2022 Toyota GR86's no-frills base trim, complete with steelies and, surprisingly, a two-speaker audio system.