The base-trim Ford Maverick is one of the most welcomed additions to Ford's lineup in years. A small pickup truck with steel wheels that gets 40 miles per gallon in the city, all for around $21,000? Sign me up.

So far, we've only seen renderings of this particular truck from Ford in its online configurator and some press material, but that doesn't really do a vehicle justice. And knowing that the lowliest Maverick won't be stocked at dealerships—at least not at launch, due to strong hybrid powertrain demand—makes it even more unlikely to see one in person. Thankfully, we have the next best thing: some unedited Instagram photos.

Immediately identifiable by its grille and steel wheels, this Maverick XL is painted in a blend of green, blue, and gray that Ford calls Area 51. If it weren't for those basic wheels, most people might not think this tiny pickup was a base model, let alone the cheapest vehicle that Ford sells, period.

According to AidanCarSpotter on Instagram, these photos were snapped at Ford's Oakville Assembly Plant in Canada earlier this month—a long way from its birthplace at the Hermosillo Stamping and Assembly plant in Mexico. This Maverick was parked alongside seven or eight others, including a top-tier Lariat with Ford's FX4 off-road package. But we've seen the more pricey Mavericks already. How about some close-ups of America's new cheap pickup?

Aside from its subjectively good looks, the Maverick XL is a respectable workhorse. For just $21,490 (inclusive of a $1,495 destination fee), buyers get a standard hybrid powertrain that offers 191 horsepower and 40 MPG in the city. On top of that, the 2.5-liter four-cylinder motor provides enough oomph to tow up to 2,000 pounds or haul up to 1,500 pounds in the bed.

The truck looks just as good inside as it does from the curb. Every Maverick features a trendy but uncomplicated interior design, while cloth seats, analog gauges, and a physical key slot are going to feel like very big wins to those who want to reject modernity in new cars. But don't worry—power windows, power locks, and ice-cold air conditioning are standard features. It is 2021, after all. A large eight-inch display is standard on the truck—though it won't have all of the same features as Ford's more robust Sync 3 infotainment system—as is a smaller 4.2-inch "productivity screen" in the gauge cluster.

As a plus, there also happened to be a base two-door Bronco in all of its glory parked next to a Maverick XLT. We've seen a few photos of this glorious combo before, but it's just too good not to mention.

The Bronco's interior shows a wiring harness with several connectors hanging. One of our keen-eyed commenters pointed out that these appear to be RS232 connectors, which may be used for data collectors or some sort of pre-production benchmarking.

The 2022 Ford Maverick is set to land on dealer lots this fall. Meanwhile, you'll have to decide which one you're actually interested in getting: the $21,000 base trim, a slightly more upscale XLT, or the most expensive Lariat trim which can run upwards of $36,000 when fully equipped. Or maybe it will be a little bit harder to decide if you've also got Hyundai Santa Cruz fever. 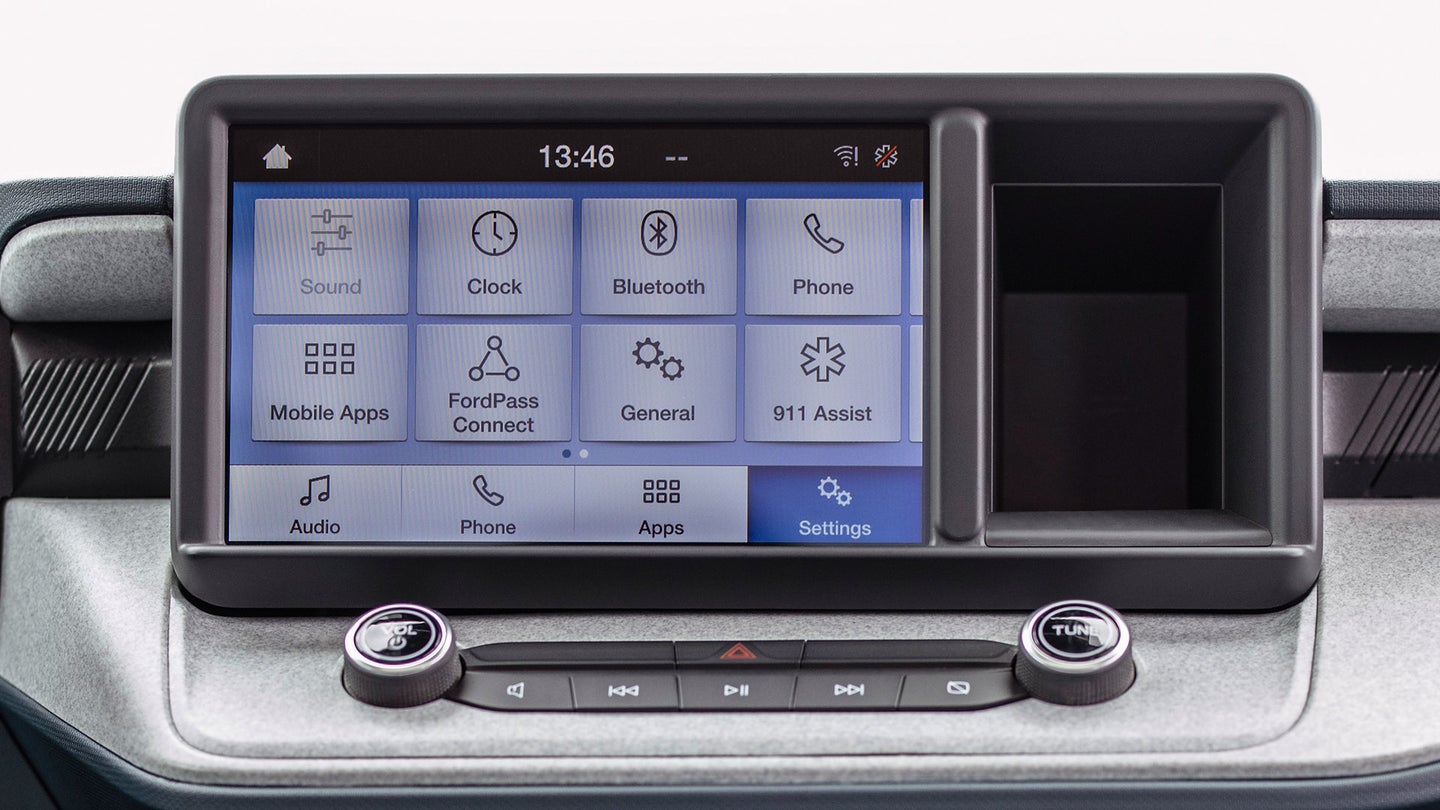 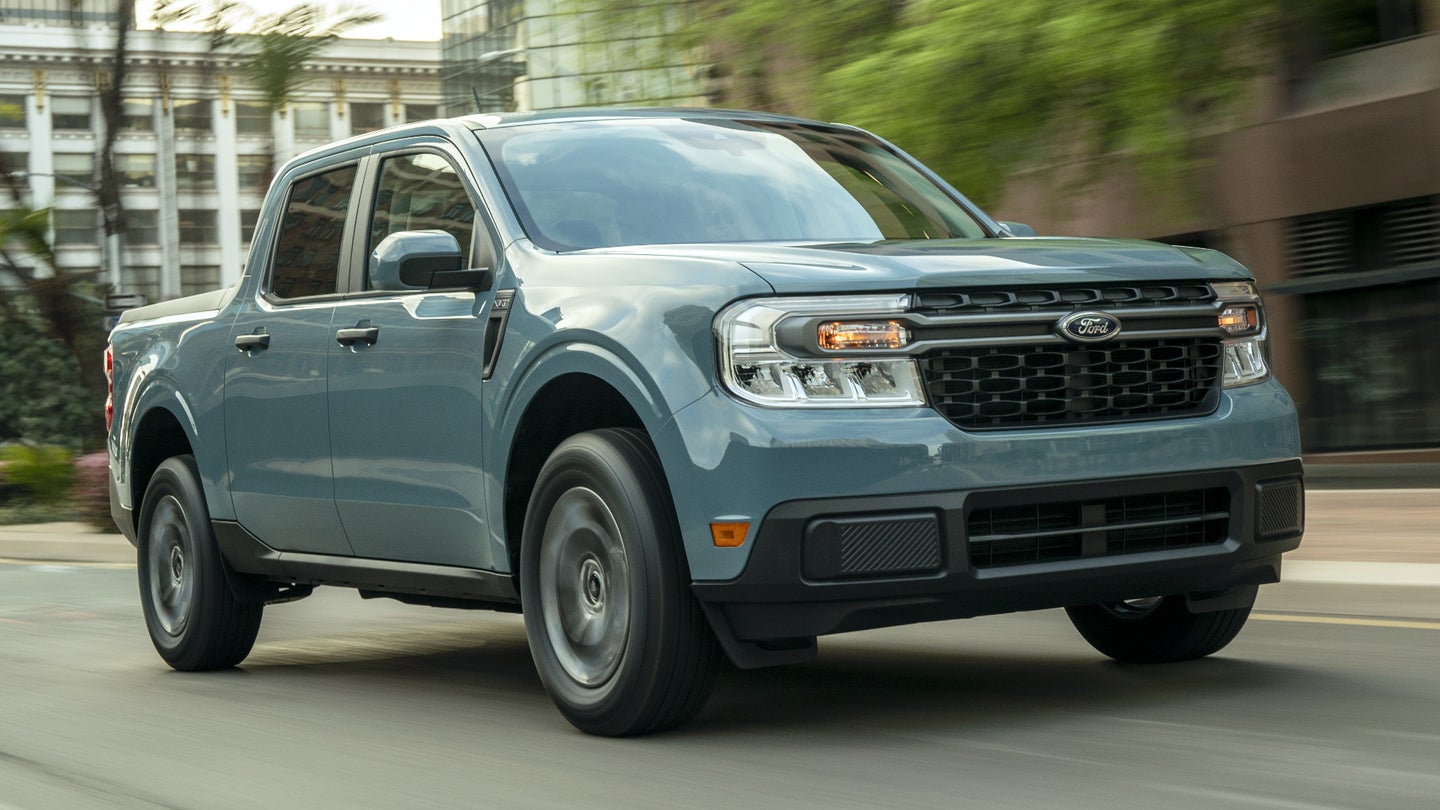 The Cheap Hybrid Ford Maverick Won’t Be Stocked at Dealerships (Update: For Now)

Only the more expensive two-liter trucks will reportedly be available on dealer lots. 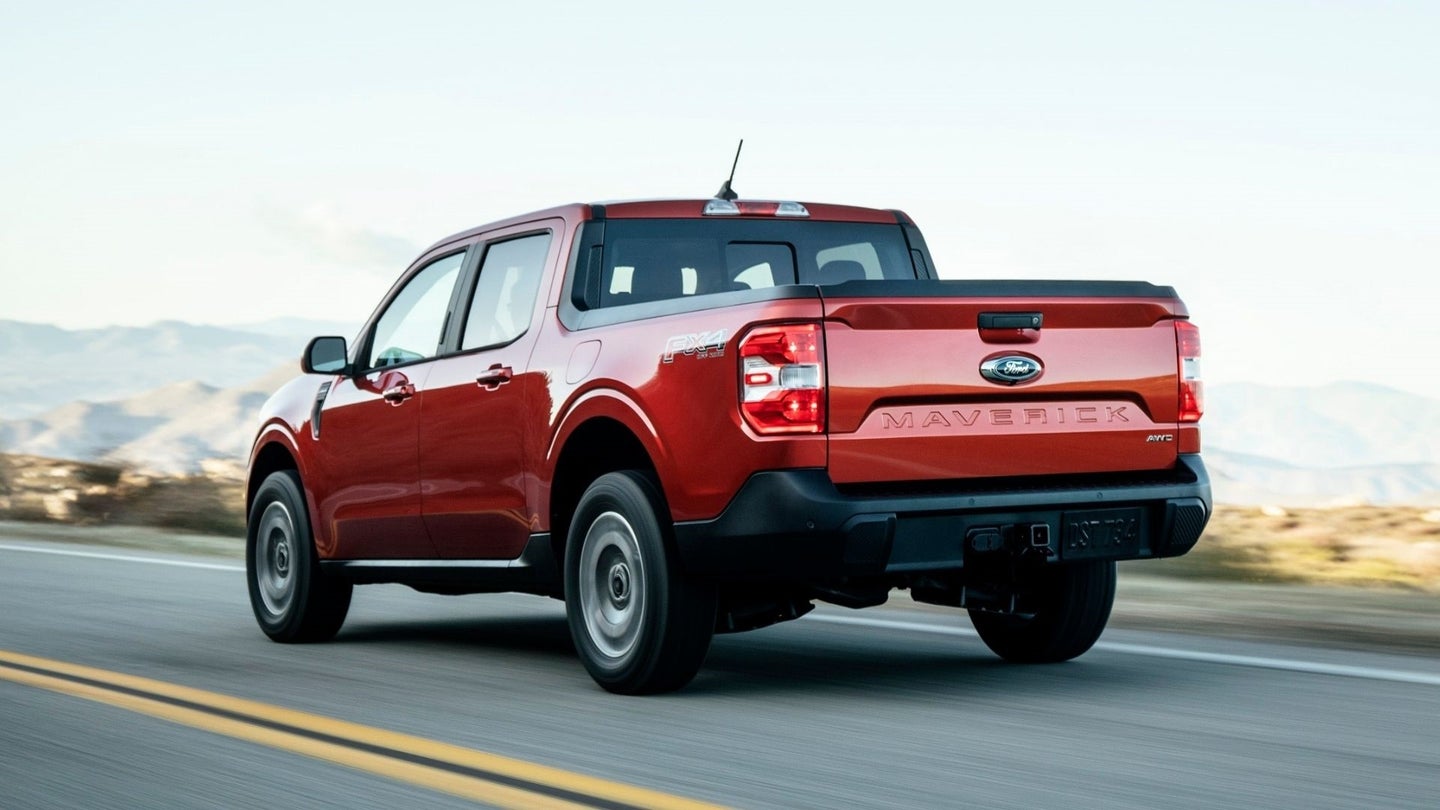 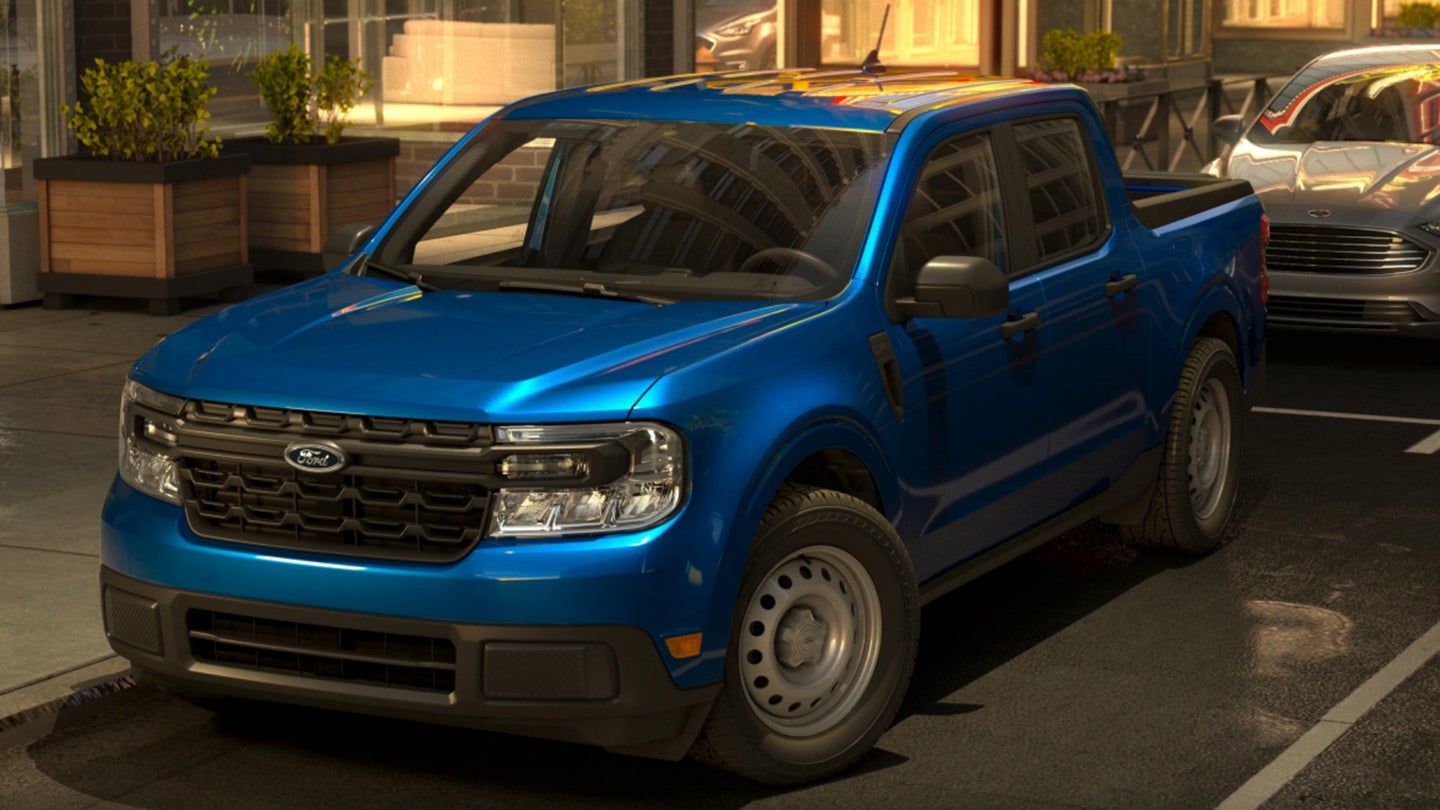 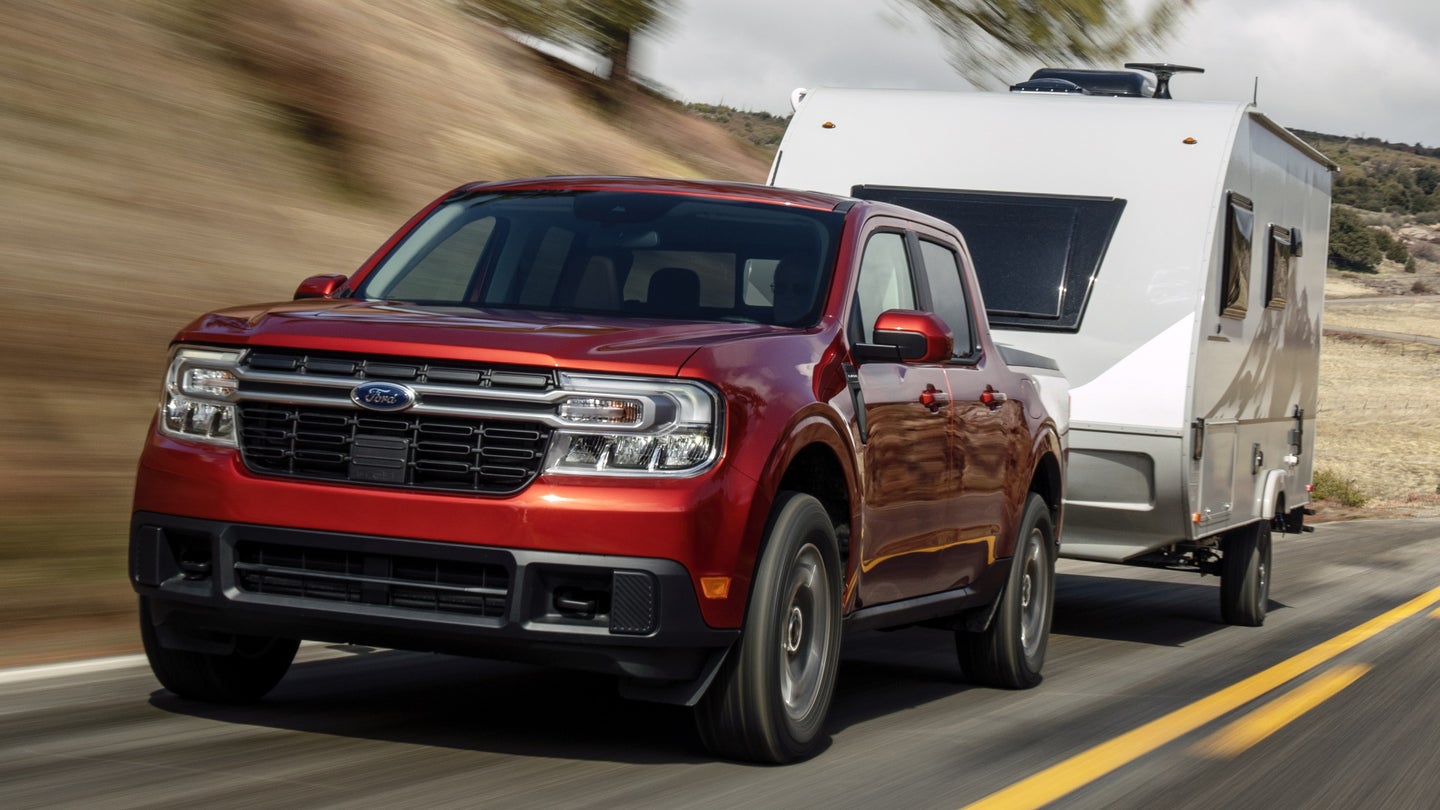