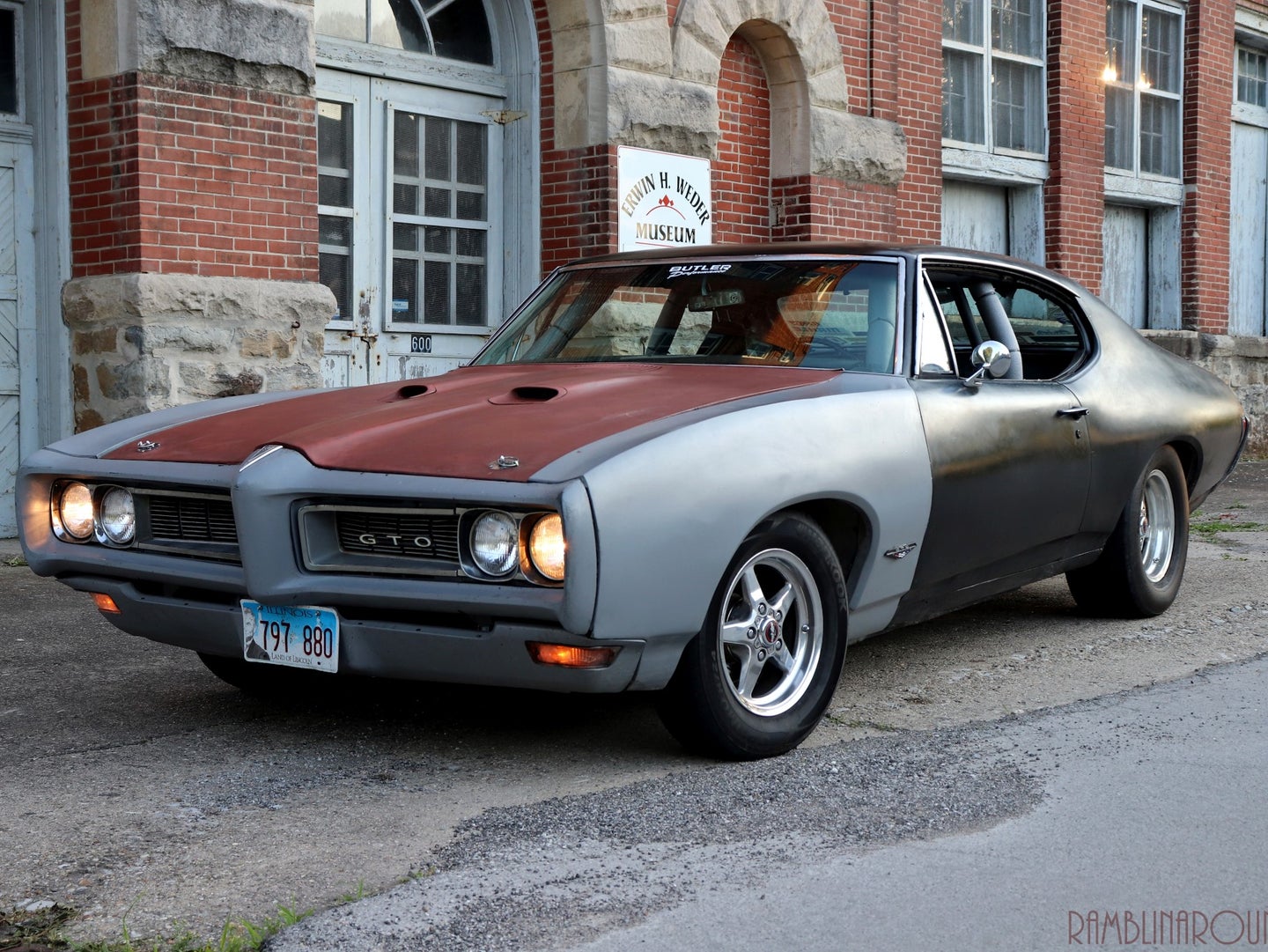 What do you do with a numbers-matching Pontiac GTO that was once deemed too rusty to save? If you're Jordan Stoltz, who just purchased this car sight-unseen, you build your very own Frankenstein's monster.

Jordan was surfing Craigslist late one-night, scrolling through listings before bed when this car popped up, he told The Drive in an interview. He always wanted a GTO, and this one was in his price range. Jordan was well aware that his price range meant the car was not going to be a healthy candidate, but the car called to him. Anyone who owns a project car understands that feeling. The car was four hours away, and without a trailer, the seller offered to bring the Pontiac to Jordan, so long as he agreed to buy it first. That's how Jordan ended up buying the car sight unseen.

This GTO had became that one car that every town has. You know, the car sitting in the same field, driveway, lot, shed, or yard for decades rusting away. Everyone knows about it, and many have tried to buy it off a stubborn owner waiting for "someday" or straight-up refusing to let it go. The GTO sat in a field for decades with its 400ci engine sitting next to it wrapped under a yellow tarp and a rag stuffed in the carburetor for weather protection.

We are not sure how the men Jordan bought the car from managed to get their hands on this small-town hero, but they originally purchased the Poncho intending to strip it for parts. The problem was that there were no parts to salvage except a rear chrome bumper – that's it. Every panel on this car had rust, but Jordan works at an auto-restoration shop in St. Louis, so all he saw was redeemable sheet metal.

Jordan flushed decades of mud out of the original 400ci V8 and automatic transmission. He used reproduction sheet metal to de-rust the entire car and did all the body-work himself in his garage. Then he drove the completed GTO like this for nearly a year before he decided to tinker with it.

He was motivated by Roadkill's General Mayhem build, which suited Jordan's taste for muscle cars. You see, Jordan likes 'em ratty, but only in appearance. They still need to go fast, handle, stop and have no rust. So he started building up the GTO to his specific desires, which ended being a Jack of all trades but a master of none.

The 400ci was treated to a stroker-kit by Butler performance and bored it out to 461ci with CNC ported aluminum heads, long-tube headers, a Barry Grand double-pumper, and what Jordan calls a "healthy" cam. He estimated the car is rocking 550 horsepower. Disc brakes up front pull the reins on all those horses, and upgraded suspension components keep in on the road. A 10-point roll cage was cut up and re-welded to fit inside the Pontiac. A 20-gallon fuel cell replaced the stock gas tank. Most recently, he installed a one-inch nitrous plate and hydraulic hand-brake because why not?

This muscle car was not built to hit the fastest time at the strip, set the hottest lap at the track, or see double-digit gas mileage. Its main goal is to be fun, collect thumbs-up from strangers, and spin its rear tires into oblivion. The GTO howls like Satan stepping on a Lego brick and looks like a Punisher movie stunt-car. He frequently takes the GTO on 120-mile round-trip commutes to work, a testament to the car's build quality.

I commend Jordan for building a bonafide-badass ride and saving a real GTO at the same time. You can see this car in action on Jordan's YouTube channel RamblinAround.

Got a Tip? Send us a note: tips@thedrive.com