This exact car was so popular that it was included in a video game for the original PlayStation. 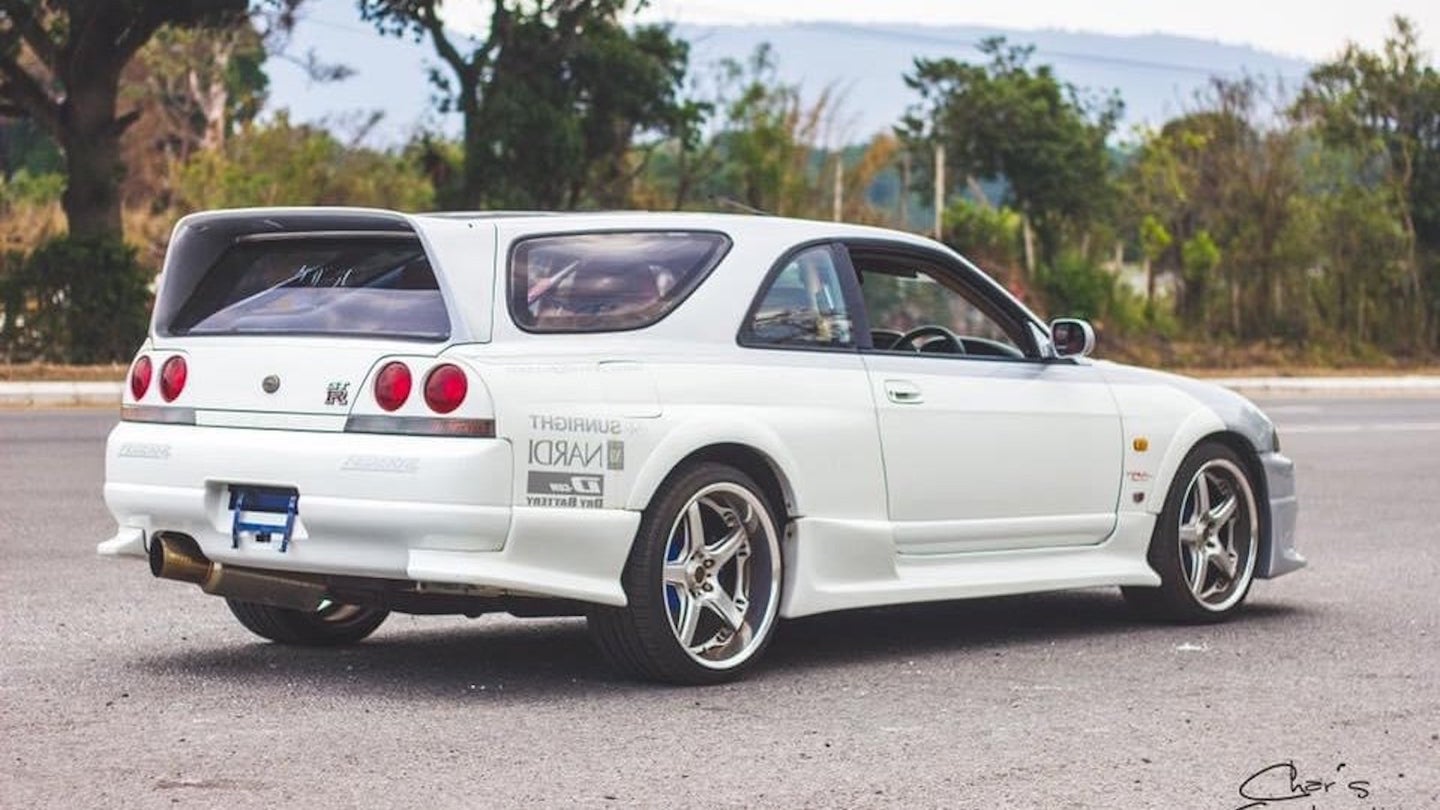 Technically known as the shooting brake, the two-door wagon has never been a common body style. Weird proportions and questionable practicality repel buyers, whose low interest in turn makes automakers hesitant to produce coupe-based wagons, especially in high-performance trims. There are notable exceptions in the "clown shoe" BMW Z3 M and Aston Martin Vanquish Zagato, though for the most part, performance shooting brakes are often the work of the aftermarket. One famous example of a third-party three-door is the Nissan Skyline GT-R "Speed Wagon," which recently surfaced for sale in Florida.

Built on the basis of a 1995 "R33" Skyline GT-R, the Speed Wagon was the brainchild of Daijiro Inada, who is partially responsible for Japan's culture of car modification as we know it today. He helped grow the aftermarket parts industry by founding the SEMA-like Tokyo Auto Salon aftermarket parts show, publishing the custom car magazine Option, and helping Keiichi Tsuichiya—the real-life Drift King himself—get the D1 Grand Prix drifting championship off the ground. It's fitting, then, that Inada drove a car that symbolizes the culture he helped develop.

Inada modeled the Speed Wagon's hatch on that of the Nissan EXA; a peculiar, angular '80s coupe we Americans know as the Pulsar NX Sportbak. He then had the interior stuffed with brand-name aftermarket parts, including a Nardi steering wheel, a Kenwood Audi system, and Recaro bucket seats all around. Most of the money, however, was spent on the car's 2.6-liter, twin-turbo RB26DETT inline-six, whose laundry list of HKS upgrades made it a rival to most supercars of the day.

Just how much power the Speed Wagon makes isn't known, though it was a full 1.8 seconds quicker down the standing quarter-mile than a stock R33 GT-R, completing the dash in 11.89 seconds. Its top speed of 189 mph would've made it a pacesetter at Midnight Club meets, and it wasn't out of its depth on the circuit either; it recorded a 1:04.452 around Tsukuba, making it just over a tenth of a second quicker than the McLaren F1's best lap of the track. So great was the Speed Wagon's clout in the '90s that it made it into countless magazines, videos, and even a PlayStation game, Option Tuning Car Battle Spec-R.

Today, the Speed Wagon appears to be in the hands of Florida-based car importer, Vistec R Imports, which lists it for sale at $85,000. That makes it almost $30,000 cheaper than a 2020 Nissan GT-R, not to mention rarer and more distinctive than the GT-R50 Italdesign. If your taste in practical Skyline GT-Rs isn't wagon-shaped, though, be sure to keep five figures squirreled away—one of those rare, four-door Autech Skyline GT-R sedans will surely make its way stateside one day.