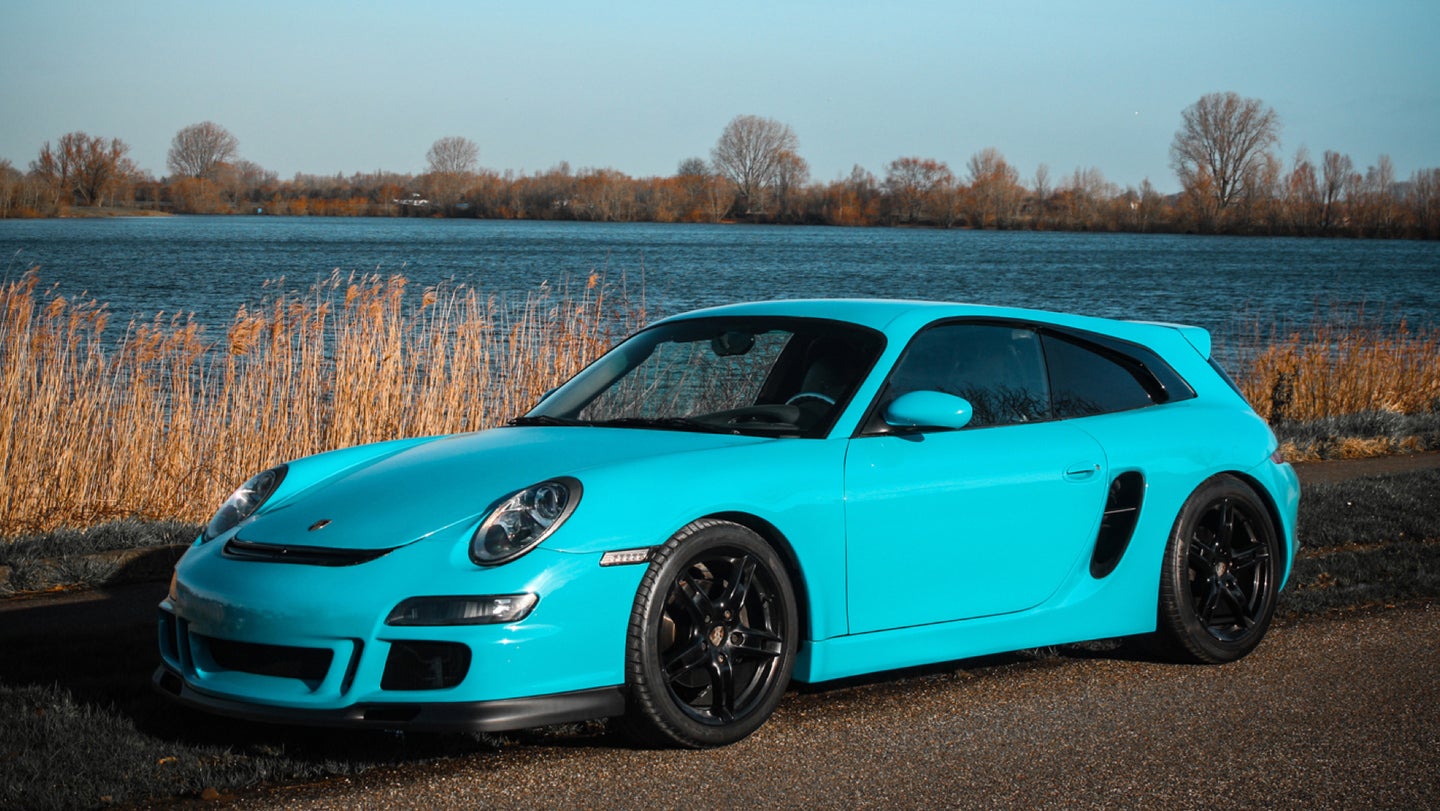 There are simply too few shooting brakes nowadays, and one Dutch company is out to fix that for Porsche fans everywhere. Fontys Hogeschool Eindhoven Motorsport Engineering head Erik Groenendijk de Laat had the idea to turn an early 986-generation Porsche Boxster into this wonderful little hatchback, and it's the greatest thing we've seen in a long time.

A mid-engine car may sound like an insane starting point for a shooting brake, but early Boxsters are affordable, plentiful and well-balanced. Some even claim that the midship Porsches are more fun to drive than the 911, and the 986's flat-six engine is a dearly missed sound from today's lower-spec 718 Boxsters. Since the Boxster is a convertible, the chassis was already stiff enough to handle the modifications involved in making it a hatchback.

The composite bodywork specialists picked to lead this project, Van Thull Development, claims they picked the 986 Boxster for its reliability, although you really should fix its troublesome intermediate shaft bearing—an issue common enough to warrant a class-action lawsuit settlement in the United States—before it causes catastrophic engine failure.

Speaking of the engine, Van Thull Development claims it doesn't make much of a difference to have it tucked inside the passenger compartment. That's where it lives with the top up on a Boxster (and Cayman, for that matter) anyway, and just like in the Cayman, it's hidden under a panel.

Students Dennis, Yori, Thom, and Bram worked with composite bodywork specialists Van Thull Development as part of Fontys' Minor Motorsport Engineering program, giving them the perfect place to start. Van Thull specializes in customizing exotic cars, including everything from Dakar Rally entries to this humble entry-level Porsche. The students had no experience in bodywork or design when they started the project, so Van Berlo Design provided some guidance on the project as well.

The inspiration came from various sketches and renders of what a modern-day Boxster shooting brake would look like. Ever since BMW released its Z3 "clown shoe," we've been yearning for another fast German shooting brake, and the internet's collective imagination at least delivered that in Photoshop form.

However, the students' goal was to get something complete enough to go into production. That's why they incorporated many off-the-shelf parts into their kit—the cost would have simply been too high if they had to make custom parts like windows for the car. The car incorporates 996-generation Porsche 911 door and side windows as well as a rear hatch assembly from a Peugeot. They wanted an updated look for this kit as well, so they incorporated elements from the later 997 and 991 generations of the 911 as well.

Van Thull already had the 997 front end conversion, so haters of the original Boxster's "melty egg" headlights can rejoice. Yet the students still had to do a lot of their own work on the roof, rear hatch, rear fenders, rear fenders and door sills, which were either adapted from existing parts or developed from scratch. Air intake parts, for example, were designed to cover part of the 911 rear side windows to make them fit the roofline of the shooting brake kit.

Even though students' minors usually last half a year, this crew was so enthusiastic about it that Groenendijk de Laat gave them another assignment that extended the students' work on the Boxster. Having your student project go into production is too cool for words, so I get it.

Van Thull Development says that the shooting brake kit will go on sale for the 986 Boxster once the company molds the completed roof, hatch, rear fenders, rear bumper, and door sills. The Fontys Minor Motorsport Engineering program revealed the finished prototype for the Boxster shooting brake on Feb. 5, so it's only a matter of time now.

Throwback To 1999 With A Pair Of Watercooled Porsche Reviews

The Guide to Buying a Porsche You Can Actually Afford

Crazy as the Porsche market is, there’s room for everyone—even you.