The Guide to Buying a Porsche You Can Actually Afford

Crazy as the Porsche market is, there’s room for everyone—even you. 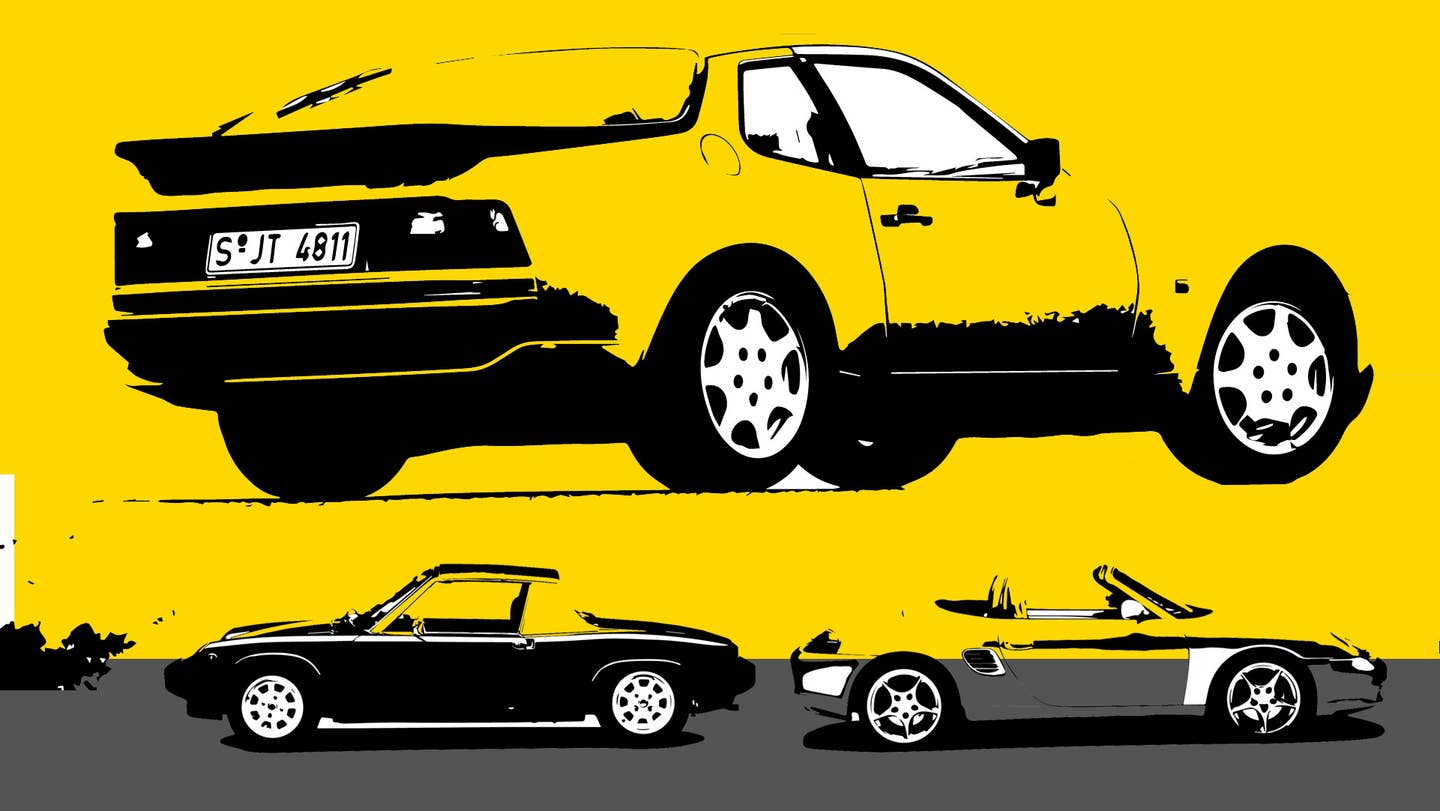 You're not a rich guy, but you want to buy a Porsche. Of course you do. The only real question is this: Which Porsche? That's because if the only image you have in your head is of a Cayenne or 911 from the last 10 years, then you're missing out, because the Gentlemen of Stuttgart built some truly wacky and wonderful cars in the Seventies and Eighties. Including those recent Caymans, Boxsters and Cayennes, there are about 30 models that make our informal $30,000 “affordability” cutoff. Some even come in at less than four figures.

We’ve picked out five models to get your cheap Porsche garage started and to give you an introduction to Porsches from an era when its cars were a little more down-to-earth. Just a little.

Many 911s are going to be out of range—but not all of them. In fact, there are some solid candidates in the $20,000 range. While you can get a good second generation 1974-77 relatively affordably—that is, for $30,000 or less—we prefer the 1999-2005 911, also known as the 996. In a kind of role reversal, the watercooled, 3.4-liter flat-six was related to the existing Boxster engine design, but with 296 horsepower. Our top choice among the 996s? The 300-horsepower Porsche Carrera from 2000-2001. Slightly more reliable than the 1999 version, these cars can be found everywhere, some with less than 60,000 miles, for less than $25,000—convertibles included! Many of the early production 996 Porsches are more used cars than collectibles, and there should be ample room to haggle over prices.

This is the era of the dread Intermediate Shaft (IMS) Bearing, an engine-ruining failure point affecting eight to 10% of all engines over 90,000 miles, so learning about diagnosis, prevention and maintenance should be at the top of your list. Also on that list is the perennially leaky rear main seal—ideally, any car over 30,000 miles will have had both of these retrofitted with improved versions. Plenty of other places on the cars like to drip water or oil—not all of them are a crisis, but all are expensive.

If you’re old enough to remember cars from the 1980s, you'll remember these funky little targa Porsches, which were typically driven (slowly, broodily) by proto-hipster college professors and local commune refugees wearing handmade sandals. But the 914s were also the cars that put new drivers in over 100,000 Porsches, and their affordability built a racing and tuning scene that lasts to this day.

Found in four variants between 1970 and 1976, by far the most desirable is the six-cylinder 914-6, which generally start over $50,000. The 2.0-liter four cylinder cars from 1975-76 are a quarter of the price and offer 75% of the performance, with 95hp (to the 914-6’s 125hp)—not bad math if you're into collecting. They also offer enormous, heavy rubber bumpers, which drop the price substantially over earlier 2.0s. The entire project arose from a failed joint effort with VW, and the 2.0s were built by longtime VW supplier Karmann, which gives them many of the same issues as a VW, like rust. Major, major rust. Parts are Porsche expensive, though, including the D-Jetronic fuel injection setup. But they’re super fun and super cheap, and with a few drinks in you (after driving) you can go around telling people this is how the Boxster happened.

Some of us—i.e., those of us who were old enough to drive when it came out—have a hard time believing the Boxster has been around for 20 years. This was the first affordable ($39,980, plus enormous dealer markup) Porsche in two decades, and it didn’t compromise on performance.

The fact that over 300,000 Boxsters have sold to date means they are seriously cheap, with older Tiptronic cars often going for $8,000-$10,000. Fast forward a few years to 2003-'04 helps a bit with performance, getting you 225 hp from the VarioCam 2.7-liter flat six, as well as the previous year’s Boxster S suspension and a glass back window.

It’s not much of a step up the price ladder, either—you’re looking at $12,500 for a 60,000-mile Boxster; and another $3,000 for a 258-hp Boxster S. But there are a few problems with the earliest ones, some well documented at the time: the IMS bearing; oil seals; and a whole fiasco with porous engine blocks and the cylinder liners used to repair them. It’s all about the maintenance with these--oil changes are vital, and ideally someone has already put $3,500-plus into the engine for you.

Here is where Porsche ventured into unfamiliar territory. The 928 wasn’t a sports car—it was technically a GT, but to modern eyes it looks an awful lot like a muscle car. After a 1977 European introduction, the 300-hp, front-engine, 4.7-liter V8 coupe worked it’s way into the US as a somewhat muted 4.5-liter, 234-hp car. Fortunately, many earlier gray-market European cars snuck in, while others were unofficially upgraded.

They’re all reliable, too. Even as power crept up to 350-hp, the V8 (which also ran up to 5.4 liters) was capable of much more, and so lived a relatively low-stress life. The price started at $28,500 for the early 4.5, and by 1992 was over $80,000, loaded up with all the luxury electronics Germany had on its shelves. That's BMW 8-series money. The 928 was well made, but it's a complicated car, and things like radios and air conditioners are damn expensive to repair. The V8 has its own unique problems, including a timing belt and bearings that should be replaced every 30,000 miles; 45,000-mile water pump and front seal replacement; and occasional torque tube bearing failures.

All Porsches need their oil changed all the time, and all turbos do, too: A 944 Turbo is that squared; and needs a big top-end service, water pump and front end seals every 30,000 miles. A Turbo clutch replacement is 16 hours of labor at a dealership and $3,000—a set of tools (like the P920 Belt Tensioner gauge and calibration bar) will pay for themselves in a hurry.

That’s what comes with owning a Porsche. It’s not only a high-quality high-performance car which you can daily drive; it’s also one you can and should spend time getting greasy with. It’s a first sports car or a last one, a thing which deserves your passion and attention. They’re great cars—you should probably own one.

An Obsessive’s Guide to Drifting a Car Like a Pro

Down the rabbit hole, far beyond the ragged edge of grip.