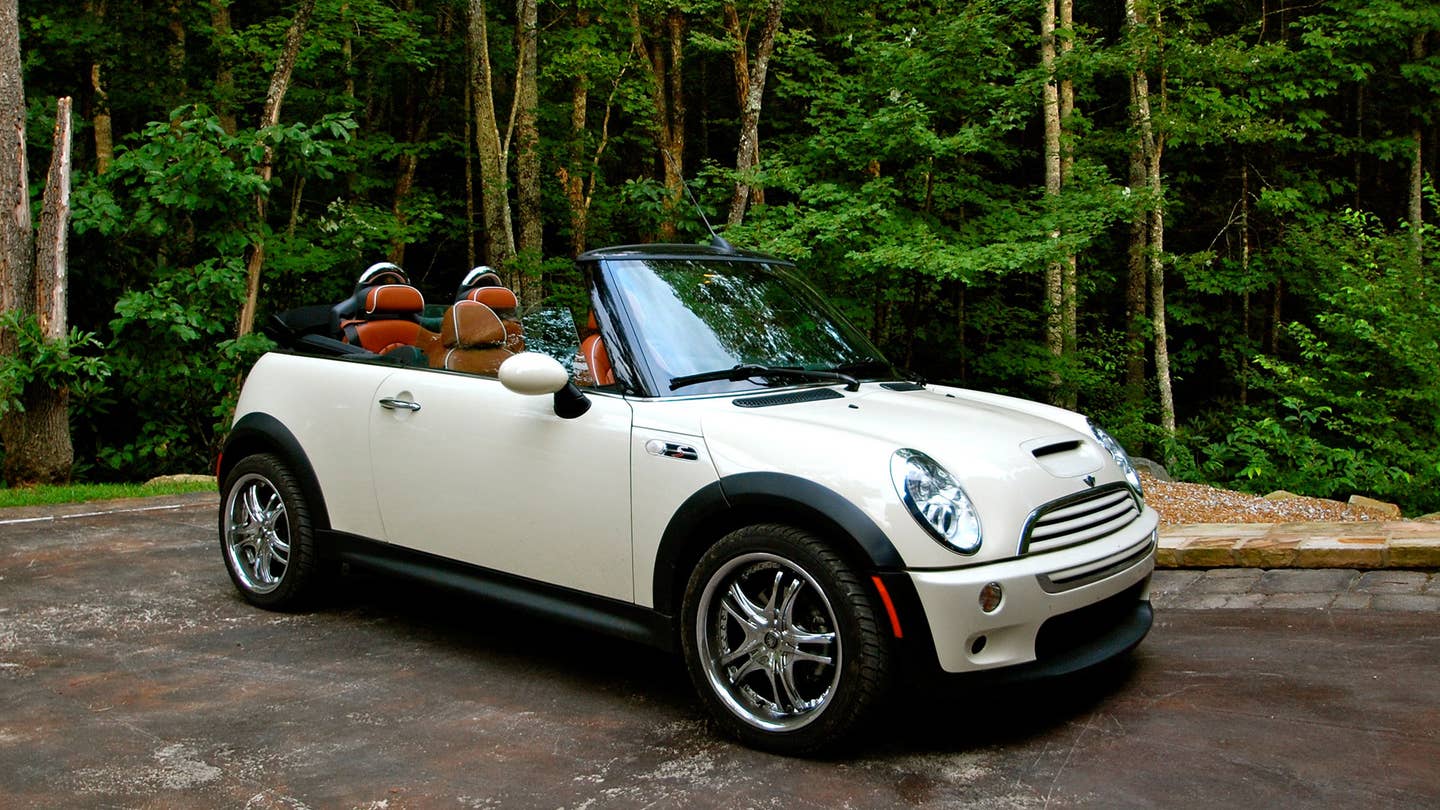 John Lupoli isn’t an automotive neophyte. His success as a building contractor has allowed him to own many choice sets of wheels over the past forty years. A Porsche 912, a 911 and a Boxster all found their way to his garage, as did a ‘69 Mercedes-Benz 280 SL convertible, a C3 Corvette and a ‘67 Maserati Mistral.

“That Mistral met a very unfortunate fate,” Lupoli tells us. In need of a windshield wiper motor replacement, the car went to a garage near his Highlands, North Carolina home. “The garage owner’s son got in the car one night and listened to the stereo but never turned the ignition off after. It overheated, caught fire and burned down to the ground,” he sighs. A true travesty. Lupoli shook it off and started the hunt for his next treasure. “I’m always looking for unique or interesting cars,” he says. Which explains, in part, how he ended up buying T-Pain’s tricked out 2007 Mini Cooper S.

Cruising Autotrader’s site, he came across the compact bulldog, a convertible appointed in pepper white with a malt brown English leather interior, and found it pretty and clean. He even liked that it was sitting on 20-inch chrome dubs and that it came with an air-bagged suspension. In the car’s write-up, there was nary a mention of the prior owner being a two-time Grammy winner. “I’m a fan of Mini and had been thinking getting one for a while. I wanted a drop top and this ticked that box,” Lupoli says. “The rims and lift kit gave it a whole new look that spoke to me. I put in an inquiry.” The car was in Atlanta and Lupoli made the two-hour trek to give it a whirl.

The ride on those oversized shoes was terrible. "You’ve got no rubber underneath you. You feel all the road and every bump felt like it was coming up through the floorboard. But I didn’t want it as a daily driver. I wanted a summer cruiser I could use occasionally and I could get smaller wheels to make it more comfortable,” Lupoli says. It was quick, thanks to that supercharged 1.6-liter powerplant cranking out 168 ponies, and had all the amenities including the $4,000 Sidewalk Package. The $8,000 air suspension system tickled Lupoli. “When you put it up, the car looked like it was on stilts,” he laughs. “I liked it. So I bought it.”

After handing over $25,000, Lupoli drove it back to North Carolina where he tried to register it. “I ran into an issue because it had an open title,” he says. “My name needed to be on the title, so I asked the lady at the DMV if we could just write it in, but she glared at me and wrote ‘void’ in huge letters across the title and told me to get the owner’s signature,” Lupoli recounts. He called the seller only to discover the man he’d dealt with was a decoy. “He said the car belongs to T-Pain and you’ll have to get 'The Pains' to sign the title.”

Lupoli was floored at this revelation. “I’ve got four kids, so they keep me plugged in,” he chuckles. “I do like rap and I think T-Pain’s songs are catchy. But it was an older friend of mine, a radiologist, who recognized the car from one of T-Pain’s music videos,” the 62-year-old says. His buddy pulled up the “Bartender” video and sure enough, the very first shot is of the Mini pulling up to the club and it gets a shout-out in the lyrics a few moments later.

Lupoli’s kids already loved the car, especially the younger ones who dubbed it “the coolest thing in the world,” so the discovery of its provenance only heightened the frenzy. (The same couldn’t be said for Lupoli’s wife: “She shook her head when I brought it home. She puts up with me.”) Lupoli’s eldest daughter undertook the task of ensuring it would be legal to drive: She ventured to the House of Pain and met T-Pain’s wife, who happily signed all the requisite paperwork. Lupoli was good to go.

The car, with a shave above 11,000 miles on the odometer, ran perfectly fine. “I enjoyed driving it, especially in the summer with the top down. It had plenty of zip, enough that I could get in front of proper sports cars. I followed a Ferrari down a mountain once and that guy couldn’t get away from me.” After a year on the 20s, Lupoli decided “enough of this” and swapped in 18s to find some relief. There were few problems with the car, all in the air suspension system.

The system could independently raise or lower any tire or any grouping, though you couldn’t bounce it. “I tried,” Lupoli laughs. (Let T-Pain himself walk you through the suspension in a homemade video.) It didn’t always run smoothly. “I took it back to the shop that originally did the work, in Atlanta, and had them fix loose hoses and some other issues and when I pulled up, they recognized the car. They pointed at a Mini Clubman on the lot and said T-Pain just dropped it off to have a suspension kit added,” Lupoli says. He’d end up making several trips to that garage as more problems arose. “I wouldn’t buy another car with a lift kit,” he admits. “It’s a nice conversation piece, but nothing you’d want to own for a long time.”

After two years, Lupoli was ready to move on. He put an ad up announcing that the tuned Mini once belonged to the preeminent Auto-Tuned rapper. “I got some offers, but none seemed serious, so I never followed through. Then, a local woman, about my age, heard I wanted to sell and was interested.” Lupoli cut her a deal - “I took a loss” - and she still drives it every day. Ask Lupoli if there’s any message he’d like to give to T-Pain about their shared automotive experience, and he’s quiet for a moment. “I’d tell him he’s got good taste and a fun spirit about him.”

The bay where the Mini resided is currently empty, but not for long. “I’m going to get a Porsche 997 and get the Alpha 9 turbos. Get it up to 900 horsepower then go track it at Road Atlanta,” Lupoli says. T-Pain should take note. That’s how you customize a car.