Let’s Talk About What Engine Displacement Actually Is

There’s no replacement for displacement, or so the old saying goes... 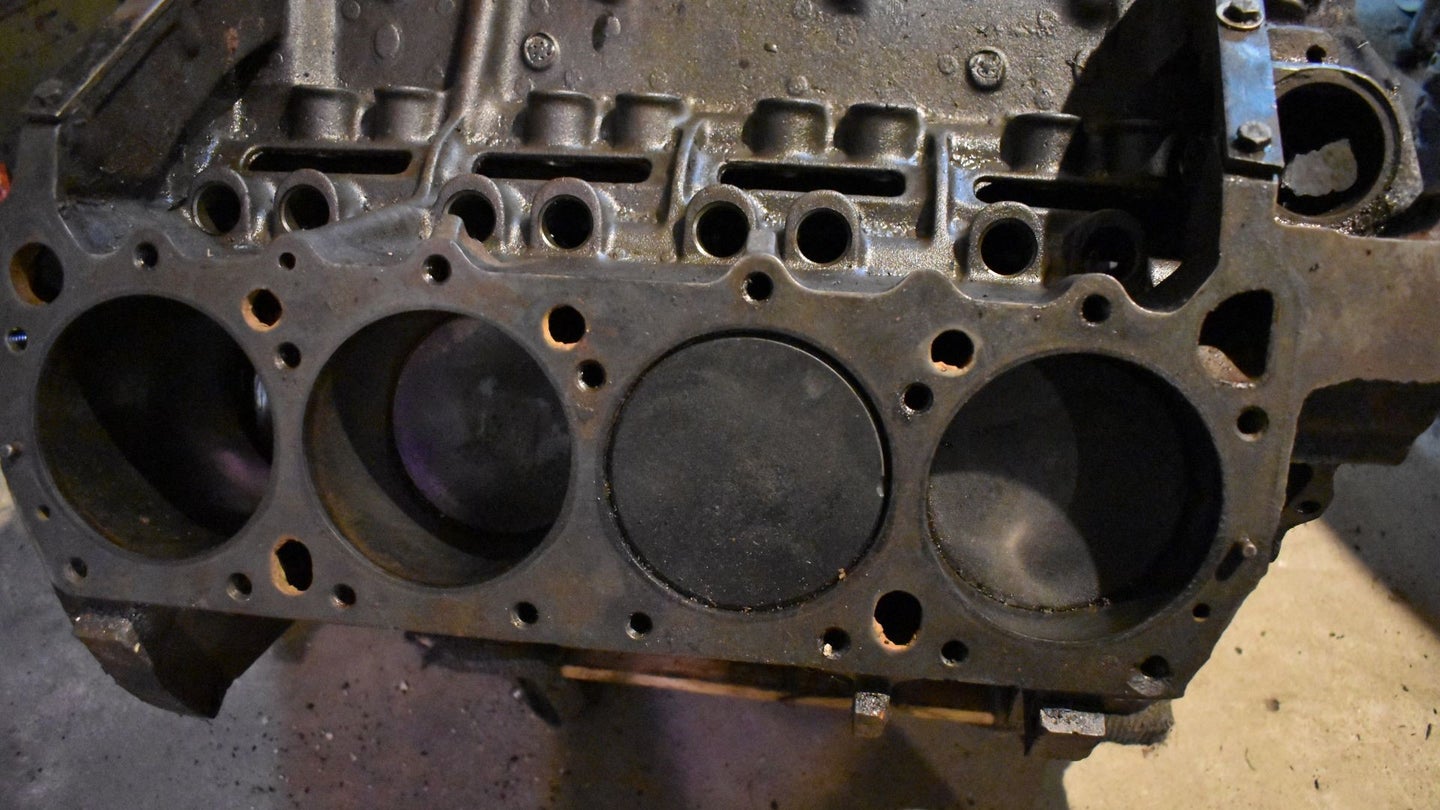 Liters, cc’s and — my favorite — cubic inches are all terms you’ll hear when folks talk about engines. While these terms are all based on different increments of measurement, they’re all used to describe one thing: an engine’s displacement.

Engine displacement is a big deal in the automotive and powersports industries. Not only does it give us an idea of what kind of power an engine is capable of, but it’s a better ego booster than anything else. Let’s face it. Bigger is always better, right? Maybe. Maybe not. It depends. Stupid turbochargers.

The fact of the matter is that engine displacement is just a measurement and can ultimately mean very little about true performance. Understanding that, how it works, and why it still matters is another thing. The Drive has its engine aficionados on the case to help you understand how engine displacement works and what it means for performance.

What Is Engine Displacement?

An engine is essentially an air pump. The design relies on the ability to displace a certain amount of air in an effort to combine it with fuel, ignite, and produce power, but it’s moving air nonetheless. Terms like 250 cc (cubic centimeters), 5.7 liters, or 426 cubic inches describe how much air an engine is capable of displacing. They’re just different methods of describing the same thing: displacement.

If you’re familiar with engine cycles, you know that engines displace air by means of a crankshaft-driven piston. It draws air in on the intake stroke and pushes it out on the exhaust stroke. The area of the pistons, how far they travel in the cylinder, and the number of cylinders all come together to tell us how much air the engine is capable of displacing.

Ready for some math? I know, I know, I’m sorry, but to find the displacement of any engine, you can use the following formula:

Let’s take a Chevrolet 350 V-8, for example. This engine has a total of eight cylinders, each with a bore of 4 inches and a stroke of 3.48 inches. So, when we plug that into our displacement formula, it should look like this:

Is There Really No Replacement for Displacement?

Increasing engine displacement is a great way to improve power potential. If an engine can move more air, it can burn more fuel and make more power. As wonderful as that sounds, relying solely on the size of an engine can cripple your efforts. By looking at history, we can see just how true that is.

Take the Fiat S76, for example. Dubbed the Beast of Turin, this car features a titanic 28.4-liter engine that shook the world when it first arrived on the scene in 1910. While I have nothing but respect for the footprint it left in history, there’s no arguing that the roughly 300 horsepower it produced is nothing short of disappointing by today’s standards. Heck, the 2021 Kia Stinger can turn out 300 horsepower with a 2.5-liter engine.

To illustrate this point, we’ll take a look at America’s sweetheart, the Chevy 350 V-8. In 1970, at the height of the horsepower wars, this engine pumped out 300 horsepower. Fast forward to the mid-1980s, when emissions regulations and fuel-efficiency standards were a top priority, that generation of Chevy 350s required folks to work hard just to turn out a wimpy 175 horsepower.

How could something like this happen? Well, not to knock the engineers trying to save the planet, but the camshafts and cylinder heads they used snuffed out the power potential of once-mighty platforms. Compression ratios were also typically lower, another major offender in power deficits.

Ultimately, there’s more to consider than just how much air can potentially flow through an engine. Just because an engine can move a ton of air doesn’t mean it will. Nor does it mean that it’s achieving an efficient burn to drive the pistons through the bores with any kind of force behind them. A proper camshaft, cylinder-head design, and compression ratio are just a few bits that need to be in order for an engine to maximize its displacement.

How Can I Increase My Engine’s Displacement?

Even though there's a long list of big displacement blunders, there's no denying that being able to move more air and fuel means you can make more power. That's why many people make modifications that effectively increase the displacement of an engine.

Overboring the cylinders and increasing the engine's stroke are the two primary methods of achieving greater displacement. Boring out an engine involves using special machinery to widen the bores. Though it does increase the size of the bores, it has a minimal effect on displacement as a whole. For example, you can bore the cylinders of a Chevy 350 .030 inches over, which takes your bore size up to 4.030 and an overall engine displacement of 355 cubic inches. Those five extra cubic inches are more real estate to work with, but it won't have a dramatic impact on power output.

Increasing stroke, on the other hand, has more of a profound effect. Say you take that same Chevy 350, but you move to a longer, 3.75-inch stroke rather than expanding the bore. That combination gives you an overall displacement of 377 cubic inches. And if you pair both mods together, you've reached the 383-cubic-inch stroker everyone's been raving about since the beginning of time. (Ed. Note: They’re great, and you should build one or drive one, if possible.)

Many engines can be coupled with stroker kits, but there's a little more to it than simply adding bigger pistons and a crankshaft. How the increase in stroke impacts the position of the piston, whether or not there's enough clearance for the bigger parts, and if the application can even accept them are all things to be concerned with, too. In short, a lot of homework goes into increasing engine displacement without pre-made kits.

What Else Can I Do To Make More Power?

We did mention that better heads and a cam and boosting the compression ratio are some ways to improve engine power. This is true for the most part. However, that doesn’t mean they’re the proper modifications for your goal and the application you have to work with.

Having a goal is absolutely critical. When you set a goal, you put yourself in the headspace to dive in and find out what’s keeping it from making the power you want it to. That may lead to you swapping out the cams, doing cylinder-head work, and dealing with a lousy compression ratio, but it ultimately depends on your situation.

And what about power adders? We certainly can’t leave superchargers and turbochargers out of the mix. Either of these modifications works to ensure an engine is working at peak volumetric efficiency. In other words, they make sure a 350-cubic-inch engine is displacing 350 cubic inches of air or more, with no regard for environmental factors that prevent it from doing so. Believe it or not, just making sure the engine is at 100 percent VE will make a major difference, which is why boost is favored by many.

Education is always a good thing. Here are a few terms you should know regarding engine displacement.

The diameter of an engine’s cylinder. When calculating the displacement of an engine, it’s important to note that you are looking for the area of the bore, not just the diameter.

The cylindrical component that travels up and down in an engine cylinder. As simple as it appears, the piston is responsible for several functions. In the case of an internal-combustion engine, the piston creates a vacuum to draw in air, compresses the mixture, transfers the energy created by ignition to the crankshaft, and presses exhaust gases out.

A shaft with offset journals that are used to aid the piston through its cycles. The journals of the crankshaft are offset from its centerline to create the reciprocating motion of the piston in the bore.

The mechanical link between the crankshaft and the pistons.

A: Engine displacement means an engine can move more air and fuel, giving it the potential to make more power. Whether or not it does make more power depends on a combination of the internal parts and the engine’s size.

Q: Which is better, a short stroke or long stroke?

A: That depends on what you’re trying to achieve. Longer strokes generally create peak torque much sooner, while shorter stroke engines can rev higher and more quickly. Also, because a longer stroke translates to bigger displacement, you might believe it makes more power. However, a shorter stroke can be far more favorable when paired with bigger pistons and better valvetrains when chasing peak power.

Q: How is the compression ratio calculated?

A: Compression ratio refers to the volume of the combustion chamber with the piston at top dead center in relation to the piston at bottom dead center. Unlike displacement, calculating compression ratio can be a complicated endeavor. Of course, piston dish or dome, combustion chamber volume, and chamber volume are all things to consider. You also can’t rule out block deck height, rod length, top ring position, piston to deck clearance, or even the head gasket’s dimensions.

Q: How do I know my bore size?

A: A quick internet search should get you in the ballpark. But you should also look at the block’s casting numbers for any indicators of an overbore, something common on older engines. To be absolutely sure, your best bet is to tear down the engine and take a measurement with a telescoping bore gauge.

Q: What’s the most common displacement for cars?

A: In today’s day and age, the average displacement for car engines is 2.0 liters. That sounds small, but don’t be fooled. Modern engines maximize efficiency and produce more power than most of yesterday’s factory V-8s.

You’re nearly there. Even though you might have been fighting to keep those eyes open, you likely have a better idea of how engine displacement works. We know that the written word isn’t for everyone, which is why we’ve included this quick video from Mercury Marine to recap everything we’ve discussed.