How to Buy a Great Cheap Car

All the pro tips you'll ever need to buy a piece of junk. 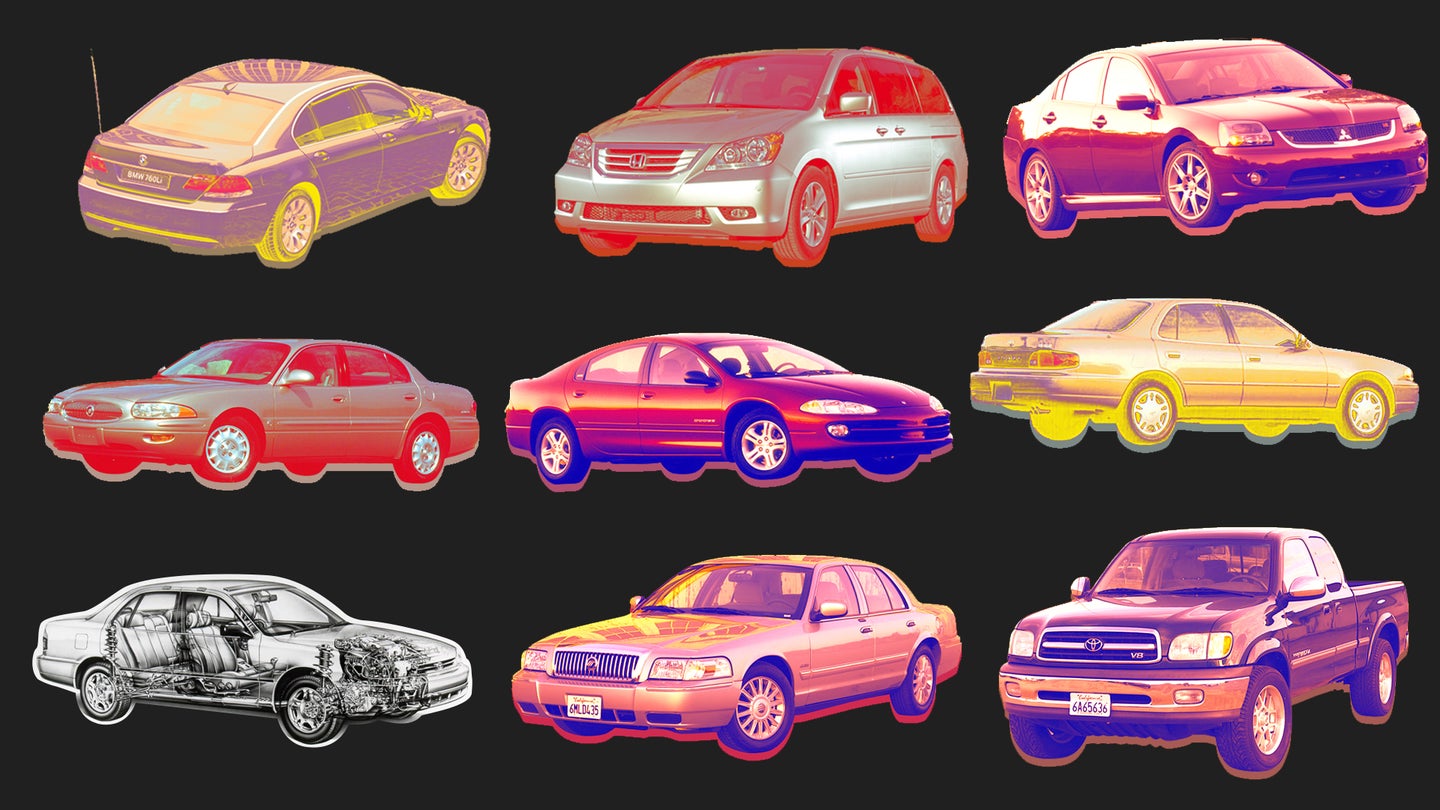 A beater is not junk. A beater is the car or truck you use up; something cheap that works reliably and is easy to fix when it eventually breaks. Beaters can be brand new or worn to the point that every bushing has dried to dust and the paint has fled the bodywork. Beaters are the cars we use every day. Beaters are usually the best cars we’ll ever own.

And when they can’t be patched up one more time, we heartlessly throw them away and get another one. Sentiment would only get in the way of the objective eye needed to find the right beater and then extract maximum value from it.

Theoretically, if you had infinite funds, you could buy a new Ferrari every year and use it up hauling building materials from Lowe’s to your Wyoming ranch. It would be a very expensive beater. But most of us aren’t the Sultan of Brunei or Mark Zuckerberg. So we need a good cheap beater to get us through, at least, a couple of years.

All advice is subjective. And the subject here is good cheap beaters and how to get the most out of them.

These are the last two generations of the big, front-drive Buick LeSabre sedan built with ennui as an engineering goal. Powered by the nearly bulletproof “3800” 3.8-liter V6, these cars weren’t quick, weren’t particularly fuel-efficient and were never, ever amusing. But the original owner demographics were Republican, off the actuarial charts, and headed for eternal rest.

Sedans are great, but minivans can do a lot more. When Honda introduced the 1999 Honda Odyssey the company finally built a true minivan in size and power. Like virtually Hondas these are exceedingly well built and age with some grace. Assuming, that is, that you find an example that hasn’t been beat up in family service too badly.

But the little known demographic fact about minivans is that, after young families, the group that buys vans like the Odyssey most are older drivers who appreciate the ease of entry and exit, the tall driving position and the versatility for hauling grandkids on weekends and heading to doctors’ appointments during the week. Finding one of those oldster-owned Odysseys is hitting beater gold.

A 2004 Odyssey EX in good condition and showing about 150K on the odometer should only run about $2,500 from a private party. The trick is, again, in shopping the seller and not just the van’s condition if you want to extract maximum value. A 2010 example with mileage still barely in five digits, should be under $10,000 and have another 100,000 miles left in it.

I’m personally biased on this since my beater is a 2000 Tundra SR5 Access Cab I bought new in 1999. Over more than 170,000 miles and 18 years of use I’ve had to replace the 4.7-liter V8’s starter and the worn out ignition switch and nothing else. The steering rack has been leaking since 2003 and it’s a slow enough leak that it’s never been a problem.

Trucks from any foreign or domestic manufacturer are good beaters. But the first generation Tundra – smaller than the current Tundra by a lot – is perfect for personal daily use and friendly in its low-key styling and unpretentious interior. I won’t argue against the F-150 or Chevy Silverado, but it’s hard to beat this old Tundra, even if it does get frankly atrocious fuel mileage.

Unfortunately the ruggedness of these trucks is well known and their market price reflects that. Even at the advanced age of 18, my old Tundra is still worth more than $4,000. The most desirable first generation Tundra – a 2006 Double Cab Limited – can still command around $15,000 despite 150,000 miles on the odometer. So shop around and shop carefully mindful that nothing holds its value better than a Toyota pickup.

1. 1992-2017 Toyota Camry. The third generation 1992 Camry – “XV10” by platform name – is the nee plus ultra Toyota. Built like a frigate, as reliable as entropy and ridiculously comfortable, the XV10 has a well-earned reputation for ultimate ruggedness. Every other Toyota since then has been striving to match its standard. And a few of the subsequent generation Camrys since then have almost matched it.

The Camry has often been the best selling car in North America and it’s so ubiquitous that making generalizations about the car’s purchasers is tough. Most Camrys have gone to families who have beaten the life out of them. But plenty wound up in the garages of some of the planet’s most boring worker drones and retired boring worker drones. They used their cars for commuting, were usually meticulous maintaining, and are now disposing their tank-like Toyota while there is still plenty of life in them.

A good 1996 Camry XLE – top of the line when it was new – should only be around $2,000. Spend only a little bit more and you should pick up a sweetheart that’s been pampered better than Prince William.

Ford’s full-size, rear-wheel drive, full-frame four-door sedans are almost trucks underneath. They use the same 4.6-liter “Modular” V8 as was once installed in the F-150, pieces like rearend assemblies can be swapped going back decades, and cab companies often get 300,000 miles or more out theirs before they crack open and expire like boiled lobsters.

The three members of the Panther family are the Ford Crown Victoria, Mercury Grand Marquis and Lincoln Town Car. By the end of their run, most were being sold into police fleets, rental fleets or livery fleets. There’s no reason to settle for an old cop car however, because there’s enough pampered civilian versions out there to seek out. Think of the old coppers as parts warehouses.

Also, avoid Town Cars that were chopped into limousines. Duh.

The slick choice here can be a 2010 or 2011 Grand Marquis. By then the Crown Vic wasn’t being sold at retail any more and the Marquis being built at a furious rate to fill Hertz and Avis lots. These Marquis models drove well with sweet rack-and-pinion steering and were usually equipped with leather upholstery that felt like nuclear-resistant vinyl.

A super-primo 2011 Grand Marquis should already have sunk below $10,000 from a private party. Higher mileage examples will go a lot lower and still likely have a couple hundred thousand miles left in them. They literally don’t make them like this any more.

While Oldsmobile and Pontiac also built versions of the H- and G-body, it’s the Buick that was pumped out in the greatest number and the only one built by a GM division that still exists.

As grimly vulture like as this advice may be, look for your LeSabre in the obituaries. Low-mileage examples out of estate sales are the most cherished of beaters. Imagine the prestige of showing your friends a 15,000 mile LeSabre that was only driven by an 80 year-old Methodist on alternating Sundays.

Even that theoretical 2005 LeSabre Limited cream puff with 15K on the odometer should be available for a price near $5,000 from a private party. Examples with more typical six-figure mileage should be around $3,000 or less. The nicest 1995 LeSabre on Earth should still be only about $2,000.

Resources to Help Your Search

Beaters aren’t the stuff of enthusiasts. So don’t expect to find online message boards filled with beater tips and tricks. And the newsstands aren’t crammed with magazines telling you how to eke the last mile out of your 15 year-old sedan without spending money.