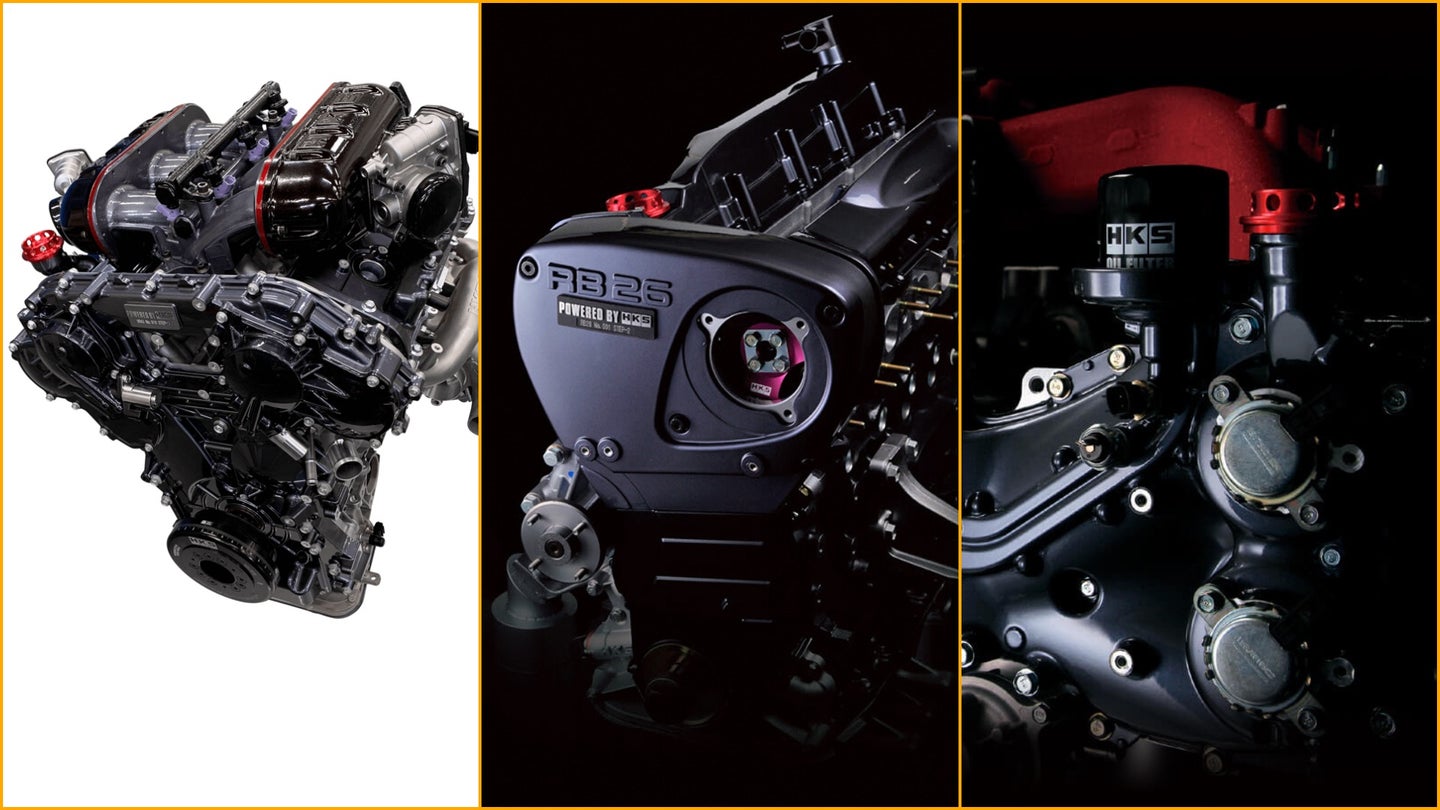 If you're lucky enough to race a Toyota 86, Nissan GT-R, or Skyline GT-R, and you're in need of a pro-built racing engine, you're in luck, because HKS just announced that it's selling ready-built engines for all three of those cars.

As one of the biggest names in the performance parts industry, HKS has collected a wealth of racing experience since 1973 that helped it develop racing engines for these three cars, almost from the ground up. Each engine was significantly re-engineered by the Japanese firm; all features entirely redesigned engine block castings, which are then mated with whatever each power plant needs to improve power, drivability, and reliability in race conditions. This isn't to say you can't buy one for a road car, but like the Toyota GT-One engine we found for sale over the weekend, the public roads aren't these engines' element, and they deserve to be used on a track. No power figures were published, but we suspect HKS will tune each engine to what your race series allows.

HKS's racing-grade Subaru FA20 is more appropriately renamed an FA21, as it gains 118cc of displacement in this form, growing to 2.1 liters. Practically everything in HKS's "Step1" FA20 was reinforced for racing, and on the more potent Step2 and Step3 engines, the block and head get extra attention, with improved cylinder head flow and reinforced coolant passages. Both the Step1 and Step2 short blocks—meaning no cylinder heads—are available this month, for the staggering cost of $23,000 and $33,000 respectively. If you want the FA20 Step3, you'll have to wait until July to drop $42,600 on the complete motor.

Being a more potent power plant, HKS's enlarged, 4.3-liter VR38DETT short block for the Nissan GT-R starts at a whopping $55,000, and when the "Pro" version comes out in August, you can expect it to cost even more. For your money, though, you get a heavy-duty, yet lightened, low-friction bottom end that offers a 12 percent longer stroke, meaning extra torque throughout the entire rev range—which is 400 rpm broader thanks to the lightened rotating assemblies. If you have a caged GT-R and 55 grand burning a hole in your pocket, you can pick up one of these engines this month, or you can trade similar money for an older Skyline GT-R, whose RB26DETT is also offered in racing trim.

HKS's RB26DETT swells to 2.8 liters, and gains a completely reworked cylinder head. Like HKS's VR38, this RB26 gains tons of torque, all of which it can use across a rev range that expands by 1,400 rpm, meaning you can scratch 9,000 with this inline-six. "High Response" versions coming this summer will get lightened bottom ends, which will be even more at home spinning to nine grand in every gear. There's no word on what that engine will cost, but expect it to be somewhere north of the Step2 RB26's starting cost of $37,500.

And it’s all managed by a repurposed Nintendo controller.