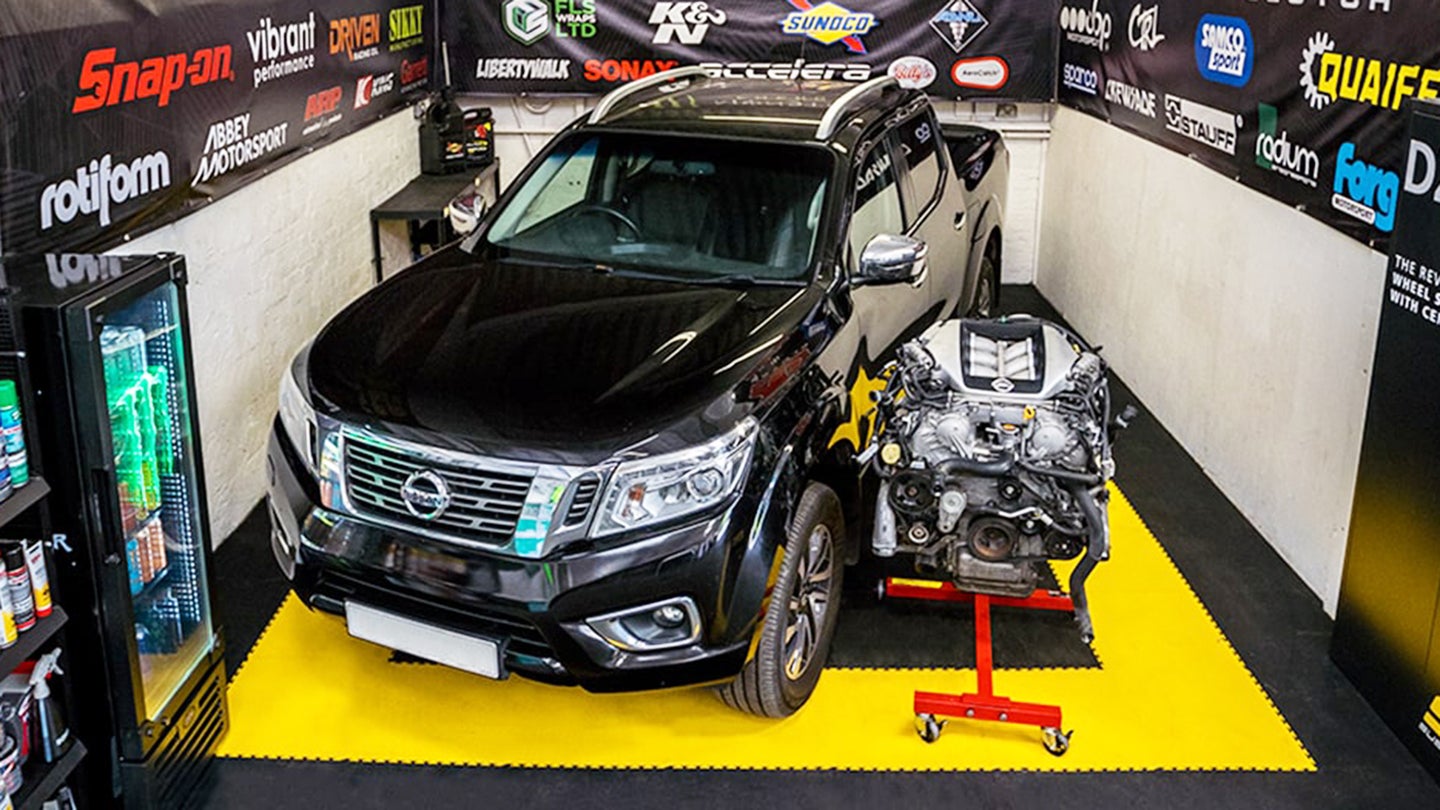 Engine swaps have become so commonplace that even the most complex jobs seem mundane nowadays. Breathe the letters "L" and "S" back-to-back and you'll be met with something along the lines of "Cool story, bro." Things are different when you're converting a vehicle's entire drivetrain, though—especially if the said drivetrain is a 1,000-hp system from a Nissan GT-R. That's what Steve "Baggsy" Biagioni is working on right now with a Nissan Navara pickup and the result will be a massively quick, massively capable supertruck with a performance-bred pedigree.

So how does someone get stuck with a spare GT-R drivetrain in the first place? Well, when you drift one professionally, you're bound to have a few parts lying around. Baggsy makes his living by competitively sliding a rear-wheel-drive Nissan GT-R that makes 1,200 hp by way of a twin-turbo V8. This left him and his shop, SB Motorsports, with the supercar's 3.8-liter, twin-turbo V6, along with the dual-clutch transmission, all-wheel-drive system, differentials, etc. Rather than letting it go to waste, he figured he'd throw it under an unsuspecting shell that captures the culture Baggsy has grown to love.

After spending time in the United States, he found the country's love of pickups to be completely unique to what he's used to in the United Kingdom. As such, Baggsy hopes to not only graft the Navara body onto the GT-R's underpinnings but rather make it a usable truck that can tow his drift car from one track to the next. Of course, he'll still be lowering it on KW Suspension to give it the proper looks and handling.

"This project has always been on the cards for SB Motorsport, ever since our initial GT-R project [in 2017]," Baggsy explained. "With racing currently on hold, this was the break we needed to re-visit the idea and bring it to fruition. We have the best partners and they share our vision to create another great vehicle that will challenge the normality’s of what’s possible, this is going to be an exciting mix of performance meets practicality.”

Unlike many of SB Motorsports' other builds, the Navara will be road-legal and retain most of the safety equipment the truck came with from the factory. This will be a challenge in and of itself, as they won't be able to simply scrap these systems and move on without them. It'll take time to wire everything up correctly, especially if they want it to be user-friendly like in the production model.

"The Navara-R, as we have already dubbed it, will challenge our in-house know-how," Baggsy added. "With this build, the aim is to keep the Navara road-legal, all the modcons of the vehicle, rather than creating a race-car chassis with minimal extras. I'm conﬁdent in our team here at SB Motorsport and honestly excited to see the development and work alongside our partners, who happen to be the World’s leading experts in their respected ﬁelds."

As for what engine mods the team will install to tweak the VR38DETT to 1,000 hp, it's yet to be seen. It likely won't take much as the engine already makes 565 ponies in its base spec. Consider that along with the fact that shops frequently build them to 2,000 hp or beyond and you'll know why it's such a popular platform for high-end tuners.

SB Motorsports will launch an interactive live stream on YouTube just two weeks from now on June 10. Viewers will then be able to influence the direction of the build, making it an immersive experience that's already had the tentative result done-up in a high definition render.

Check back for more as the Navara-R progresses, and know it'll probably be way faster than your uncle's S10 drag truck...unless your uncle is Larry Larson.