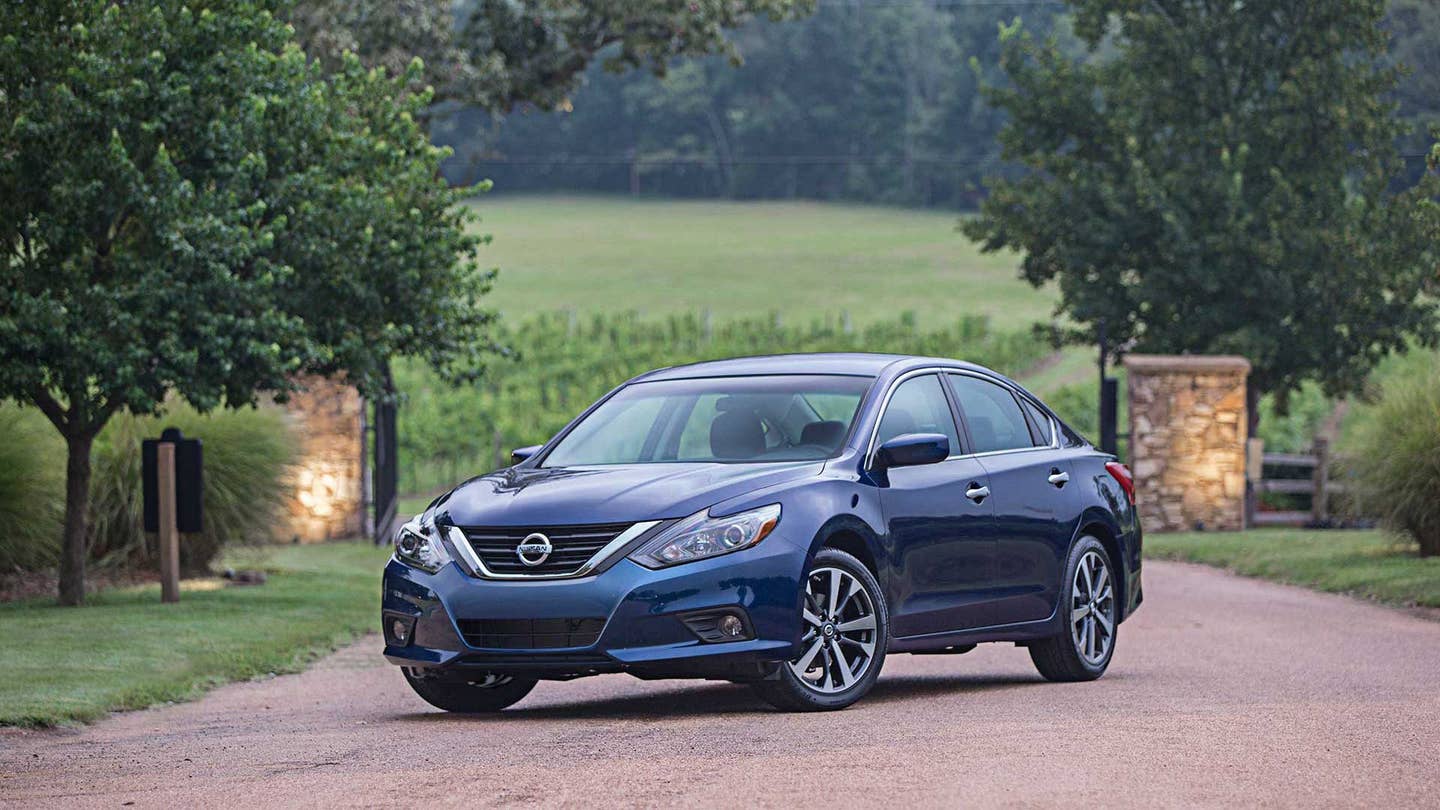 Credit the Nissan Altima as the reason your average V6 family sedan can kick sand in the face of Magnum P.I.'s Ferrari. A decade ago, the third-generation car showed up with a snoot-full of VQ-series six-cylinder, stomping all over hot hatches and sport coupes, and begging the question, “So why would anyone buy a Maxima again?”

Once an unlikely athlete, the Altima has become victim of its own success, adopting a middle-age demeanor. The current car, while comfortable, quiet and competent, is a far cry from the old torque-steerin' SE-R version.

But as exhibited by the new Maxima, a certain edginess has returned to Nissan's sedan division. Their flagship remains more cruiser than four-door sports car, but it's a spirited improvement over the previous generation, which married a coke-bottle shape with the personality of flat ginger ale.

Like the Murano crossover and Maxima, the Altima now inherits Nissan's “energetic flow” styling lines. Frankly, it works better here than on those pricier models, adding muscularity to the front and a dash of Infiniti to the rear.

Drag coefficient is down to an impressive 0.26, thanks to active shutters in the grille and a smoother underbody. Nissan expects the city fuel-economy performance of this generation of Altima to equal what the 2002 model would achieve on the highway. Fightin’ words.

On the inside, the Altima retains some of the most comfortable seats in the business, now made quieter by acoustic glass in the windshield. In addition, there's more sound-deadening material especially in the firewall, and a larger muffler to keep the driver further isolated from engine noise.

Silent, but also perhaps less deadly, thanks to an integrated text-message assistant that'll both read out incoming messages and allow the driver to respond; everything from a curt, “driving, can't text,” to an apologetic, “running late.”

Also new is Nissan's predictive collision warning system, which monitors the behavior of not just the car you're following, but one further ahead as well. Mercedes and Nissan’s own Infiniti have similar system, but no one at this price point does.

Smoother, quieter, more efficient, more cleverer—but there's a bit of spark, too. Nissan enthusiasts who remember the Altima as a hustler will welcome the announcement of the new SR version, available in both V6 and four-cylinder trims.

The 182-horsepower inline-four and the 270-hp V6 offer very familiar power levels, but the SR model comes with an unexpectedly stiff suspension, 18-inch alloys and twice as much starch in the rear anti-roll bar as before, abetting smoother, more responsive mid-corner behavior. Nissan also trumpets reworked power-steering for all Altimas, claiming better feedback across the line.

As a total package, this refresh represents a dash of spice added to a competent consumer favorite. And yet, once again, we find ourselves returning to a familiar question: With an Altima improved in style and handling capabilities, do we really need a Maxima?