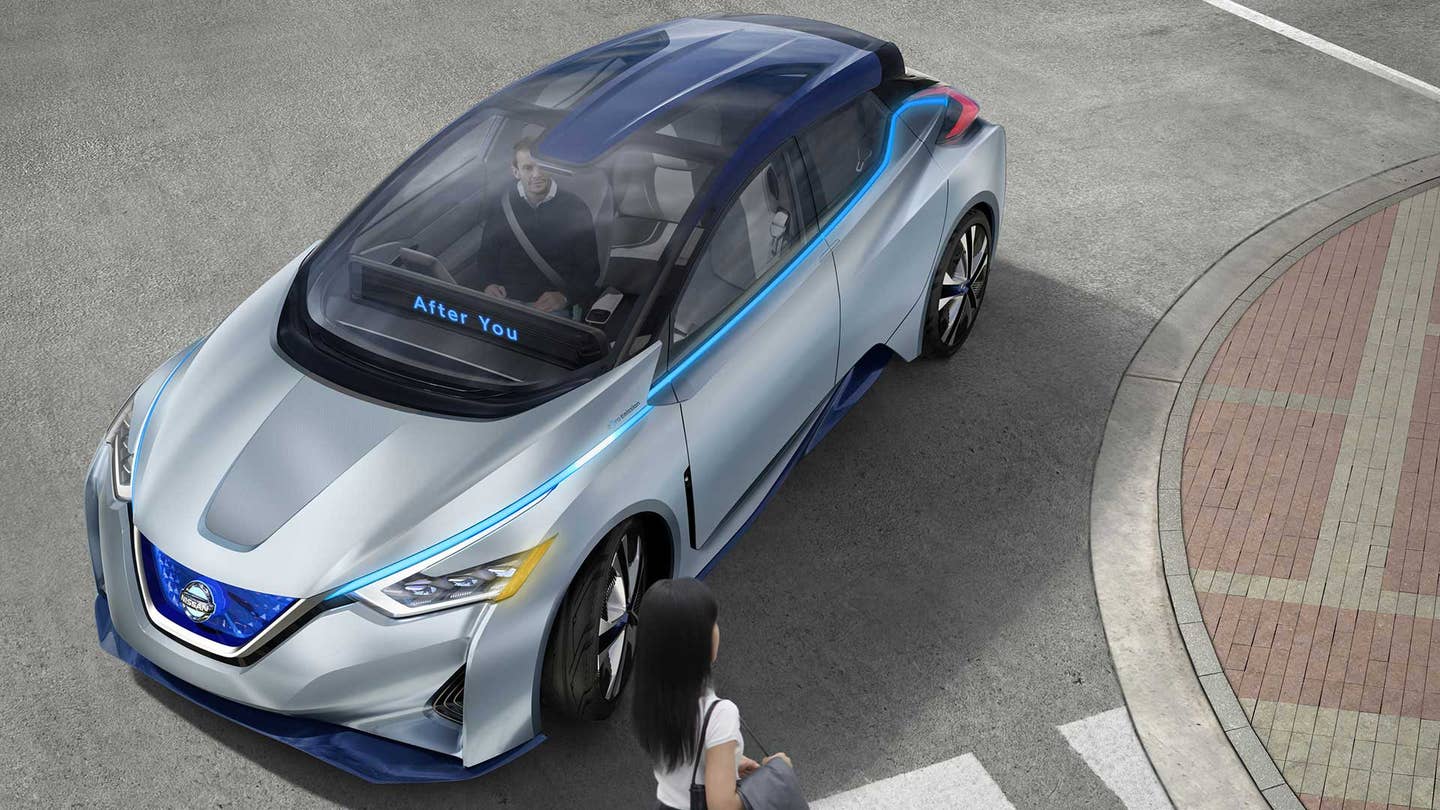 Engineering and assembling a rolling cocoon is the easy part of creating an autonomous car, relatively speaking. The hard part is dealing with humans—these machines’ end users, and pedestrian and vehicular obstacles. We are too complex, diverse, and unpredictable. That’s why Nissan has hired Dr. Melissa Cefkin.

A design anthropologist based at the Nissan Technical Center in Silicon Valley, Cefkin is charged with leading the research into the complex web of human-machine interaction: within and outside the vehicle, and in the context of the broader culture. “One of the big questions,” Dr. Melissa Cefkin says, “is how many regularities and universalities are there in human behavior, or is there just kind of infinite variation?”

Cefkin’s project is to take an empirical look at what happens in shared spaces between and among humans and vehicles to decipher what that says about patterns of interaction. Her goal is, “to help the autonomous vehicle know how to ‘behave’ properly.”

To this end, Cefkin employs all of the core tools of anthropology—individual and group interviews, charted observation, and codified ethnographic videography among them—in order to seek patterns that can be fed into the decision chains of our robot overlords.

Some of Cefkin’s more fascinating findings point out the subtlety of the challenges that autonomous vehicles will face.

Because they are designed to maximize efficiency, and lack free will, computerized cars tend to be inherent rule followers. So at highly regulated intersections like stoplights, where nearly everyone abides the rules, they do very well. But at more ambiguous locales, things can get a bit more confounding.

“Something like a stop sign is often just a small object that people have to figure out what they want to do with,” Cefkin says. “There’s a push and pull, different interpretations of what stopping means and in what order it should occur or cease.”

Having recently found ourselves at a seven-way, traffic light-free intersection in Beverly Hills, we would have to agree. The aggressive dance of advance and retreat between the cars and pedestrians resembled the random projectile choreography of Elizabeth Streb.

Additionally, Cefkin has proven that Newton’s Law of Inertia also applies to pedestrians, skateboarders and scooterers.

“There seems to be a predominant preference for maintaining some sort of movement and flow,” Cefkin says. “So when we’ve spent time observing people on the road and sidewalk, there is a very subtle selection of pathways and routes that they use to avoid interaction requirements—places where they’re going to have to stop and figure out, okay, what do I do.”

These manifestations of the mysterious human can be at once very subtle and very sudden, and thus difficult for machines to decipher. Worse yet, humans can elicit unpredictable herd behavior, wherein one person plays the role of what Cefkin calls “sentinel,” leading a charge against the rules or even against everyone’s best interest and others follow or “piggyback” on this behavior. Think, lemmings.

And then there’s the bicycles. “We haven’t done a lot with the bicyclists yet, but the little bit that we’ve started to do, we think we’re going to see all of that [unpredictable behavior] in droves,” Cefkin says warily. “Bicycling is a whole social movement. It’s a cause. It’s a mission—there are activists in this arena.”

Currently, in such engagements, nonverbal human-on-human cues like head nods, horn honks, light flashes, and terse expressions implying the threat of violence prevail in communicating intent. In order to allow autonomous vehicles to replicate such means, Cefkin is helping Nissan to design some sort of 21st century semaphore systems.

Color-coded lights (red, blue, green) might let proximate humans know of the vehicle’s intent to start, stop, or stay in place. Sauron-like light-eye strips may track their movement, alerting them to the vehicle’s surveillant awareness of their presence. And a Holzer-esque text panel could flash directional messages like “After You,” “Please Wait,” and “Deviants Are Sacrificed to Ensure Group Solidarity.”

As intransigent as we can be about obeying instructions from our mechanical rulers, human-powered travel may also offer opportunistic instruction for what a vehicle might become in the age of autonomiety. Though current vehicles are trending in the direction of becoming hermetically sealed environments—larger, higher up, smaller windows—trendy options like biking or electro-boarding offer alternative and more physical experiences in moving through time and space, interacting with surroundings, and connecting with an environment.

“Do autonomous vehicles add anything into the picture about how we might want to think about the relationship between the outside and the inside, and what people might be doing and experiencing as they move through space?” Cefkin asks. Liberated from the need to drive, or from the division between driver and passenger, can an autonomous vehicle help bring the outside in, or facilitate a more shared experience?

“Some of the research says that what actually happens in cars is that they offer a specific and unique kind of interaction, allowing us to take in and look together at the same space as we move forward through it,” Cefkin says. Think about the Great Dome observation car Amtrak runs on some of its most scenic routes.

But the alternative seems just as likely. We were just in Tokyo, where every single person on every train spent the entire journey staring into the screen of their smartphone. Freed from the necessity of engaging with the road, won’t everyone, driver included, just retreat further into their individuated virtual environment?

“The trend of being cloistered in our own worlds and living in a bubble through our communication devices, there’s no reason to think that automatically or magically changes with autonomous vehicles,” Cefkin says. “But occasionally I hear of people getting themselves off social media intentionally, or investigating social movement niches like sustainability and the search for new collective forms of economic and social interaction,” she says optimistically.

“Or you can imagine families having one car designed to create a bigger bubble, one that’s very efficient and allows everyone to get all of their work done inside the car, and another one that is the car they get into when they want to go on their Sunday drive and have a different experience of the world. So I don’t think it’s either-or.”